Some of the best beach drives in Australia

Does Your 4WD love the beach? Here are some of the best

There are plenty of sandy experiences in our great country, these will get your wanderlust in to gear.

SLAP on the singlets, sunscreen and thongs, folks, as summer is just around the corner. And if you’re one of the many people who prefer to chase sun and surf during the warmer months – via a decent sand track, of course – then you’re no doubt aware Australia has some very special coastal destinations.

From the island delights of south-east Queensland to the equally stunning Dirk Hartog Island on the west coast – and everything in between – Australia is crammed with picturesque beaches and challenging sand tracks. So you can imagine our dilemma when asked to cut this list to just five …

Of course, if you’re still unable to leave your state by the time the mercury starts to rise (due to the COV1D-19 pandemic), then plot these trips down on your bucket list and save them for later … as they’re truly extraordinary.

And remember, lower your tyre pressures and keep an eye on the tide!

OKAY, let’s get the obvious one out of the way first. Fraser Island (or K’gari) is the quintessential Aussie beach for four-wheel drivers, with its postcard-esque stretches of white sand waiting to be disturbed by off-road tyres. In fact, Fraser Island is considered the largest sand island on the planet. 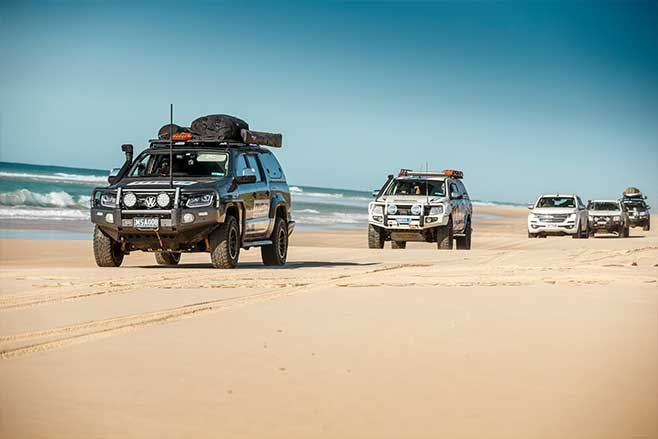 Reaching the island itself is possible from the mainland at Inskip Point, where the ferry takes about an hour and will drop you off on the west coast. The nearby Kingfisher Bay Resort is a real treasure of the island and a great stop for dinner, a warm shower or a night on the beers. Eurong Beach Resort has you covered for such activities on the east side.

One of Fraser Island’s most compelling highlights is its ever-changing environment, which criss-crosses between beautiful coasts, picturesque lakes and rich forests. Central Station is an essential point of interest on the island, with the settlement once a major timber yard famous for its hoop pine and massive satinay trees. Logging lasted from about the 1860s until 1991, and in 1998 most of the island was protected within the Great Sandy NP.

Plenty of walking tracks snake their way to and from Central Station, with one in particular taking you to a mass of giant satinays – photos don’t do them justice. Once you’ve worked up a sweat it’s a great opportunity to take a dip in one of the island’s many lakes, with Lake McKenzie undoubtedly being the most popular with tourists. Back to the coast and there are many destinations and landmarks popular with four-wheelers, especially on the east coast, and none more so than the Maheno, the old wreck of a ship which washed ashore in 1935. North of Maheno is Indian Head, Waddy Point campsite and the village of Orchid Beach. Farther north again (about 50km or so) and you’ll pass Ngkala Rocks and arrive at Sandy Cape and the nearby Sandy Cape Lighthouse.

Fraser Island hides plenty more hidden secrets, which you’ll have to discover for yourself. Camping and vehicle access permits are required to visit Fraser, and the ferry can book out, so it’s best to book in advance.

WHILE you’re touring south-east Queensland, it’d be remiss not to lower your tyre pressures once more and tackle a few more of the beautiful islands in the region. Moreton and North Stradbroke (Straddie) Islands are two sand jewels that offer great off-roading fun. 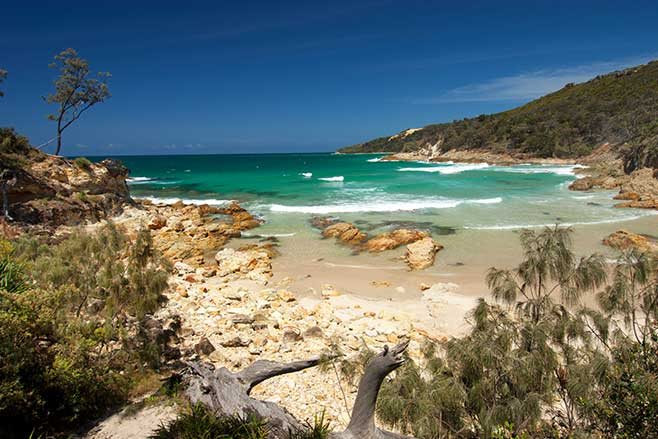 What’s most enticing about Moreton Island is that it’s so close to Brisbane it makes for a perfect weekend escape – 40km from the heart of Brissy, to be exact. The island’s 18,000 hectares are packed with plenty of activities, which will keep the entire family enthralled for days – even weeks. There are countless swimming spots, surfing options (especially at the patrolled Main Beach), diving, fishing (at designated areas), bushwalking, sand-tobogganing (yep!), and of course 4WDing on the many sand tracks.

Of the island’s many points of interests, some recommendations include the unmissable Five Hills Lookout; the historic Cape Moreton Lighthouse; whale-watching at the Blue Lagoon campground (from June to October) and a dip in Blue Lagoon lake; the Rous Battery World War II defence site; and Mirapool Lagoon.

The Micat ferry runs daily from the Port of Brisbane to the Tangalooma Wrecks on the island’s central-west coast. Camping and vehicle-access permits are required from the Qld Department of National Parks. 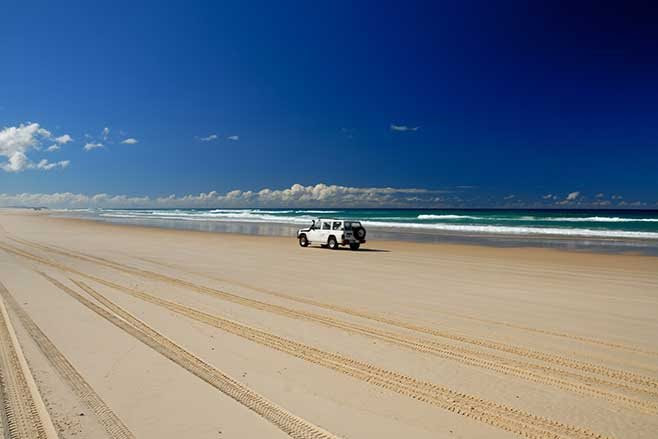 From Moreton Island, a ferry departs Kooringal to North Stradbroke Island (Straddie). Also accessible via the mainland at Cleveland, Straddie is another Mecca for swimming, surfing and fishing. With both bitumen and unsealed sand tracks, the four-wheel driving isn’t too shabby either.

In fact, the drive along Flinders Beach on the northern coastline is second-to-none, but it’s popular with both drivers and pedestrians, so remain alert. Another epic drive is the 24km southern journey along Main Beach, ending at Jumpinpin Channel. Other more difficult tracks weave through the island, including the tricky Keyhole Lakes Track.

OFTEN called the Fraser Island of the West Coast, Dirk Hartog Island (DHI) is an isolated paradise named after the Dutch sea captain who discovered the island in 1616.

Accessible only via a barge that departs the mainland at Blackies Beach, Steep Point (and takes only 15 minutes), DHI matches the beaches of south-east Qld for its sand driving and picturesque views, but it’s considerably more remote, which is what makes it such a lucrative proposition. 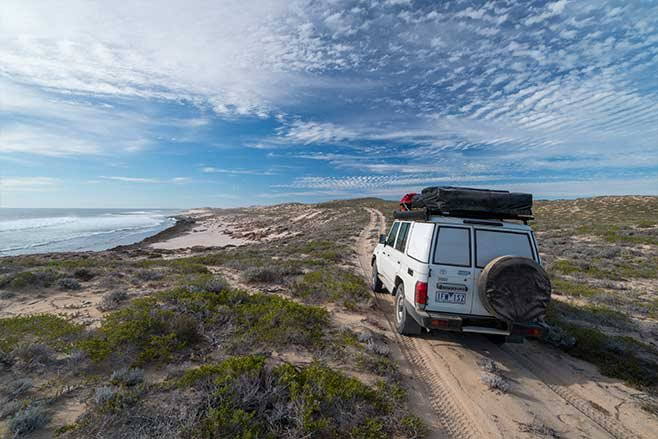 To this end, it’s important to be entirely self-sufficient before embarking on a DHI adventure. This means, at a minimum, an up-to-scratch 4×4 recently ticked off by your mechanic, recovery gear, and reliable communications.

Perhaps the island’s biggest attraction is the Blow Holes, which takes some dune-bashing to reach. Depending on the swell of the ocean will dictate how ferocious the Blow Holes are; either way, it’s a highlight not to be missed.

Tourers can also stand in the footsteps of Dirk Hartog himself and take in the views overlooking Shark Bay, at Cape Inscription; while a stopover at The Homestead will net you a hot shower in a private bathroom, a comfy bed and beautiful views overlooking the ocean. 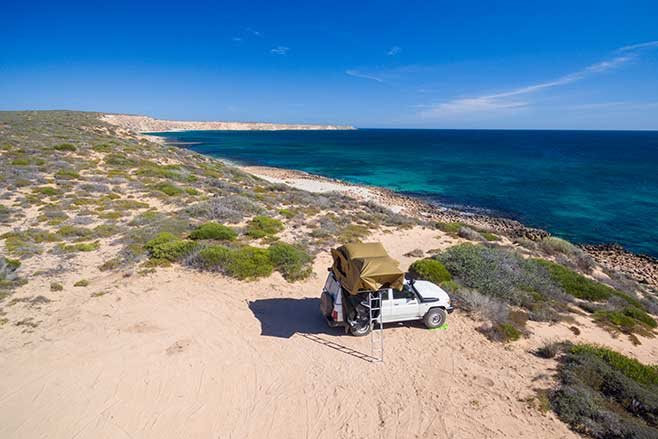 Further seclusion can be found at Turtle Bay, famous for its white sands and turquoise Shark Bay water. And for those keen on luring a fish a two, you can throw a line in at many places, with the best spots at Withnell Point, Urchin Point and The Block.

We reckon the perfect way to end a DHI adventure is to venture to Herald Heights to watch the sunset, made special by the fact it’s the most westerly point in Australia.

YOU won’t be the first tourer to be overawed by Stockton Beach’s formidable sand-dune system, which stretches as far as the eye can see.

However, much of it is fenced off from the general public. Due to environmental damage parts of the sand-dune system have been blocked off to the general public while the many tracks and dunes recover. Pundits, though, can still play on the beachfront at defined routes, and at the 3.5km² Recreation Vehicle Area. 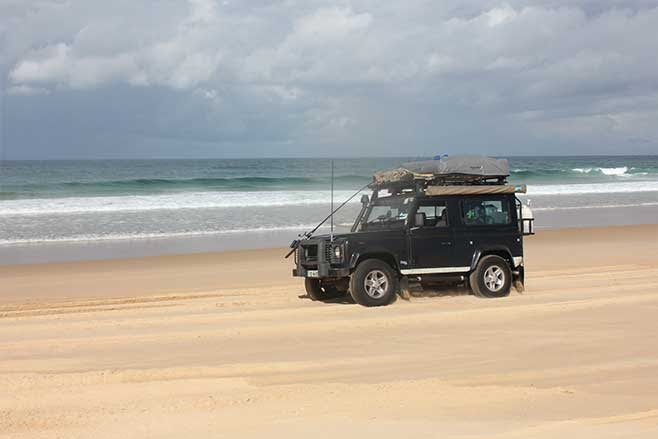 Aside from the obvious off-roading benefits, what draws many pundits is the area’s rich history. Many relics from WWII defence systems can be found on these shores, as well as numerous Aboriginal midden sites that are of cultural significance. This is why it is vital to avoid reckless driving (something the area is unfortunately known for) and not drive over vegetation or shell accumulations.

A highlight of Stockton Beach is The Shacks (or Tin City), a collection of huts located 11km south-west of Anna Bay. The huts were constructed by a group of squatters during the Great Depression of the 1930s, and were then torn down during WWII. Now only 11 shacks remain. 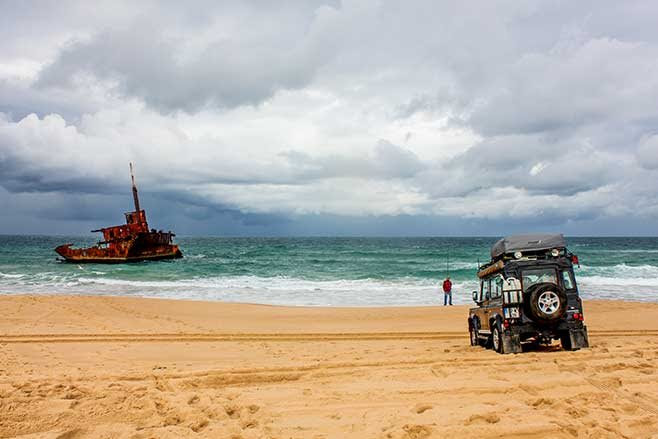 Fun fact: Fans of 1979’s Mad Max may recognise Tin City and the surrounding dunes, as they were used during several of the film’s scenes.

You can also hunt for the 1932 Uralla shipwreck, and the remains of the 1974 Synga shipwreck located about 6km from Lavis Lane.

Annual and three-day vehicle permits are available and required. Despite the strict rules governing the region, Stockton Beach is still a worthy beach expedition.

There’s no better place to dune-hop in Victoria than at Portland Dunes (within the Discovery Bay Coastal Park), located about four hours from Melbourne in the state’s south-west. Well, we say no ‘better’ place, but there aren’t really any other places in Victoria where you can drive a 4×4 on the beach. 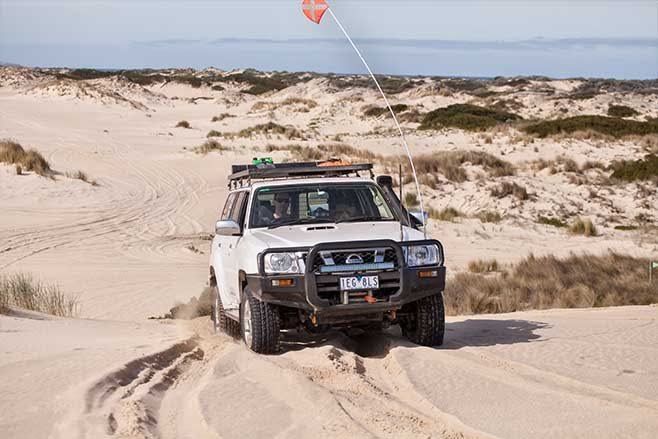 Once you’re in, you’ll be rewarded with a challenging sand-dune system, and you’ll need an adequately set-up rig for serious sand play, with recovery gear and working comms.

The closest town for provisions is at Portland, about 50km away, so you’ll also need to be totally self-sufficient when it comes to food, water and, of course, fuel. 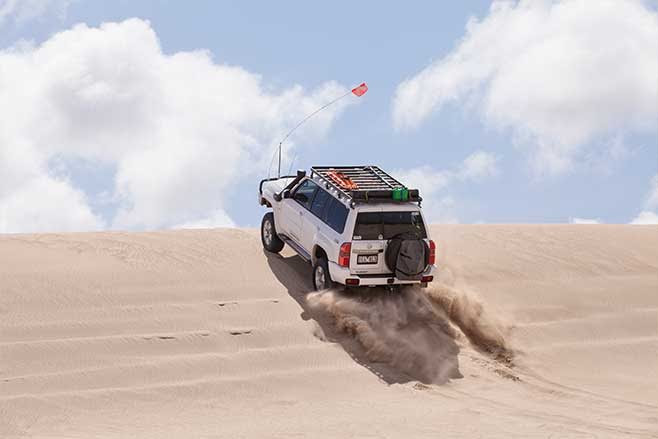 An attraction of the Dunes is ‘The Bowl’, where dune buggies can be found circling the 30-degree slope at speeds up to 130km/h. And when you need to take a break from 4WDing, fishing from the beach provides a bit of fun.

Victoria might be better known for the High Country, but you won’t be disappointed with a detour (quite a big detour, mind you) to the Portland Dunes.