Hyundai Venue – Cheap it is.

The Wheels Verdict: The Venue is the cheapest SUV that we can recommend someone go out and spend money on and not feel guilty. While there are foibles, notably the gutless atmo engine, there is much to like about the Venue. Add the affordable price point, and Hyundai could be onto a real winner. Cheap and cheerful? You bet. 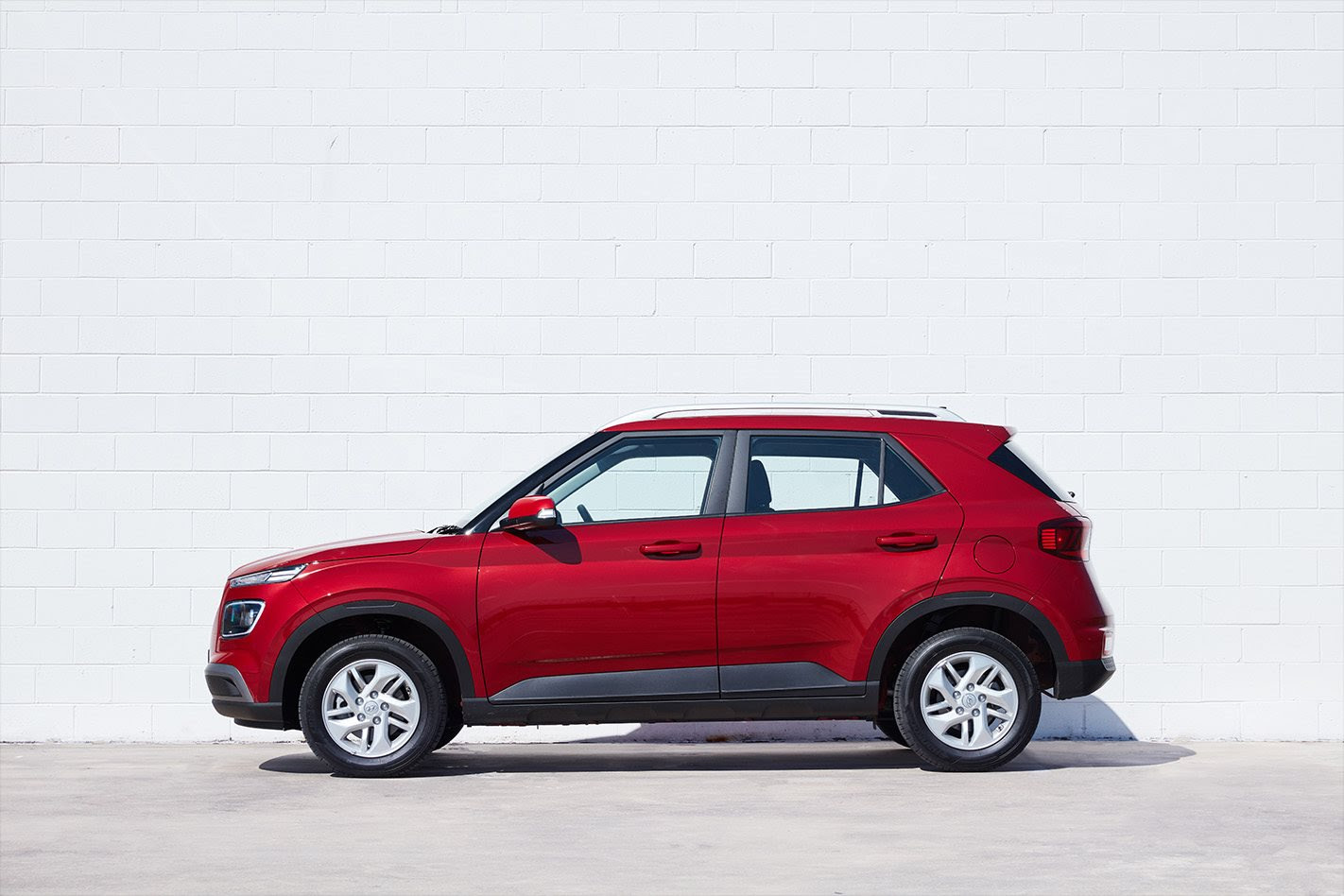 WHAT IS IT THE HYUNDAI VENUE?

The new entry-level model for Hyundai. It’s smaller than showroom sibling the Kona, but competes in the same small SUV segment. It starts below $20,000 (just), and will be the cheapest Hyundai on sale in Australia once the Accent shuffles off its mortal coil. Powered by a 1.6-litre atmo four-pot across the range, performance is, ah, eventual. However there is plenty to like, from the bold styling, to a well-sorted cabin design, and capable chassis.

The small SUV segment booming, with growth of 58 percent since 2014 (light car sales have dropped 37 percent in the same period), so it’s vital that Hyundai get the Venue right. If they nail the brief, this could be a sales winner, however, in a crowded segment, and against proven and tough competition, it’s not going to be easy. We headed to the Australian launch to drive the all-new baby SUV on some of Queensland’s more challenging roads. 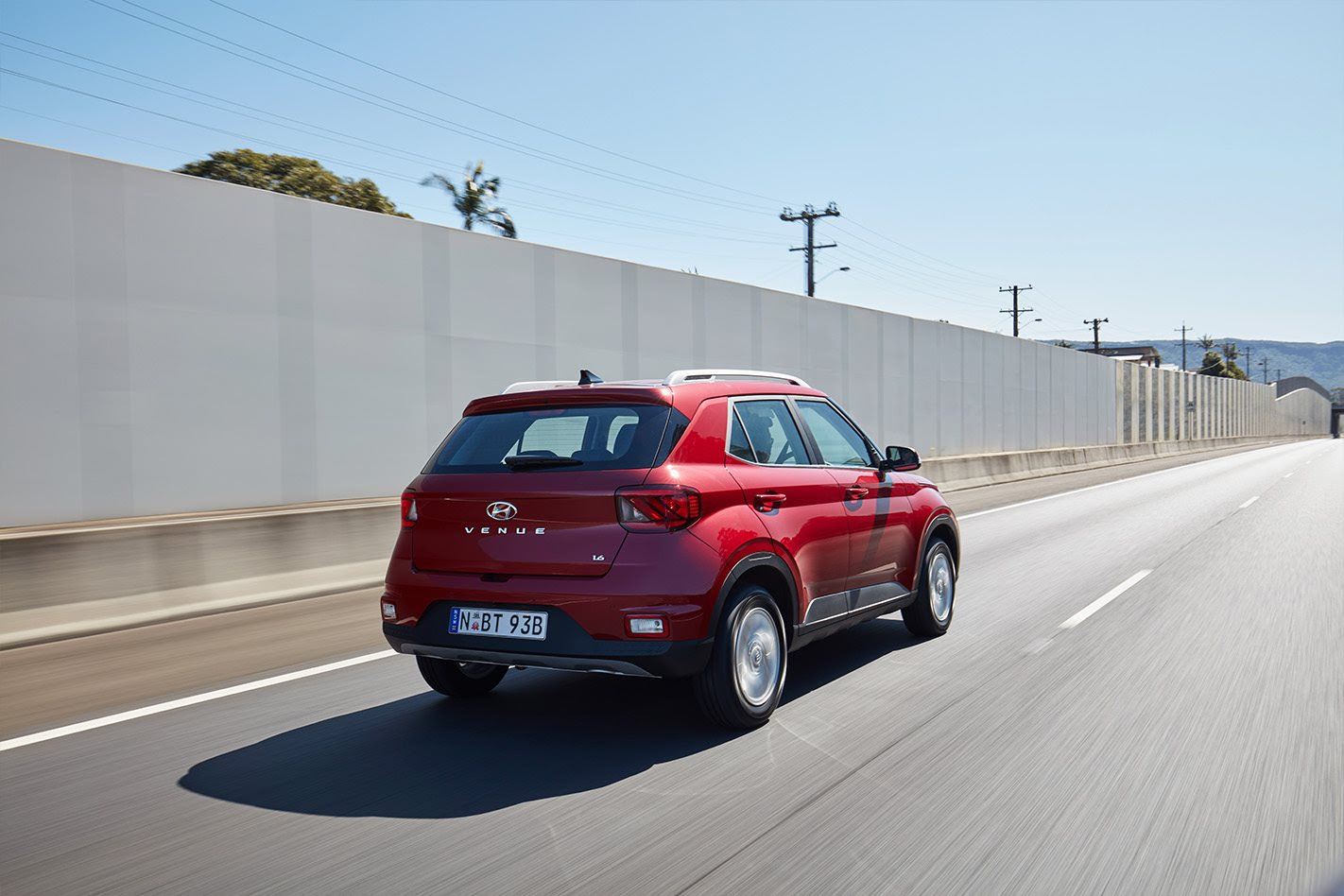 The Accent has long been the cheapest model offered by Hyundai in Australia. Originally sold as the Excel, its prime responsibility was to bring people into showrooms, and shift in big numbers. It did so with ease, as the X3 was one of the best sales successes for an imported model in Australia’s history.

However, times, and the market, have changed, and now the Accent has ceased production, with no replacement in sight. Enter the Hyundai Venue, which will be picking up the mantle as the most affordable vehicle sold by the Korean giant in Australia.

Read next: Compact SUVs get set to take over Australia

Thing is, Hyundai never intended for the Venue to be an Accent replacement. Senior figures from Hyundai attempted to temper expectations for the Venue at the local launch, noting that the Venue isn’t a like-for-like replacement for the outgoing price leader. Well, they needn’t worry, because the Venue is a solid thing, and buyers of small SUVs would be justified in wanting to park one in their driveway. 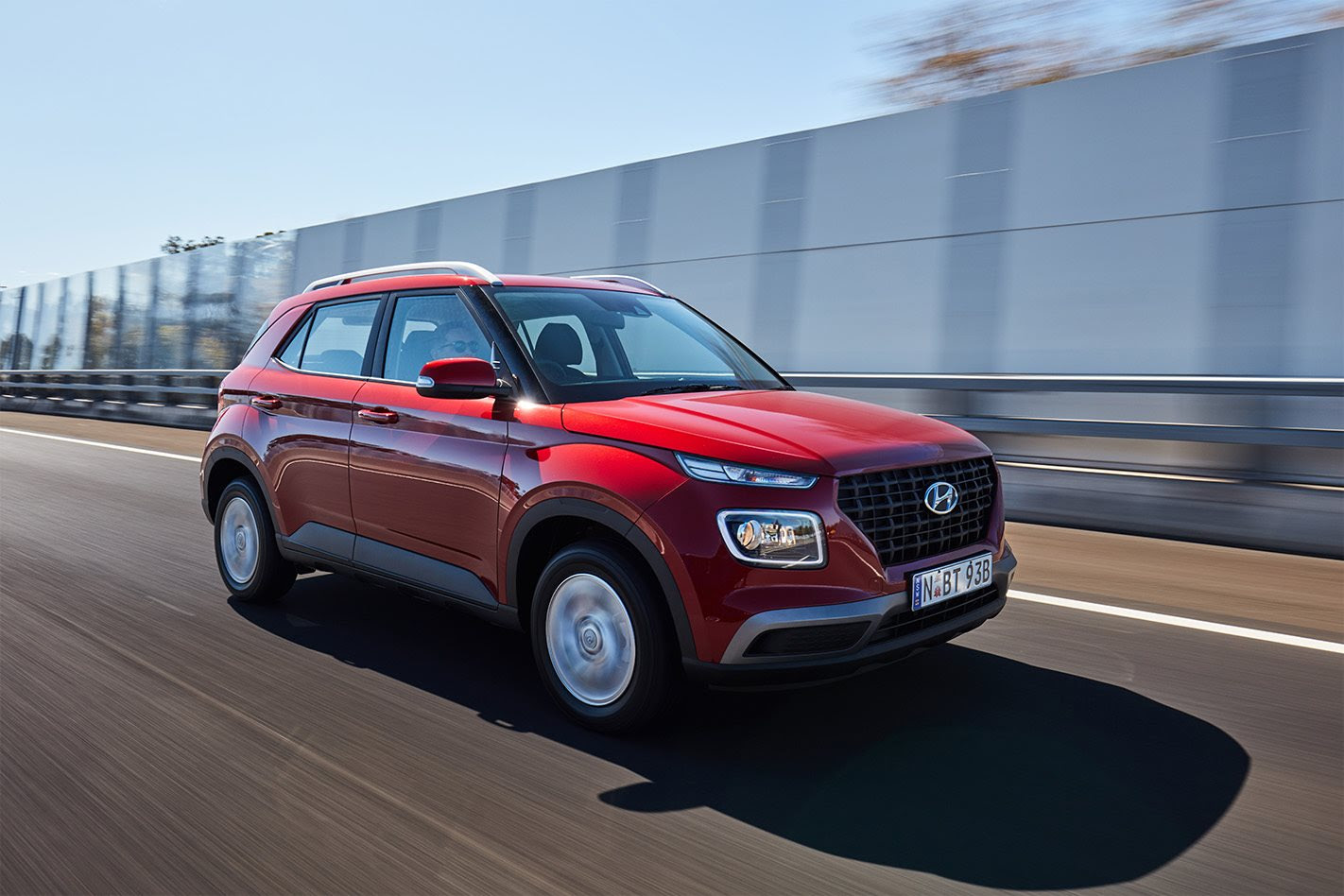 Three variants are available (Go, Active, and Elite) and all are powered by a 1.6-litre naturally aspirated four-cylinder engine, sending 90kW and 151Nm to the front wheels. In the Go and Active this is via either a six-speed automatic or manual transmission, while the flagship Elite is only available with the automatic gearbox.

First off, yes, it’s more expensive than the Accent, with entry costs jumping $4500 to $19,990 for the entry-level Go. Importantly, that’s a cheaper sticker price than can be found in the Mazda CX-3, Subaru XV, Toyota C-HR, Mitsubishi ASX, and Honda HR-V ranges. Automatic variants are $2000 more expensive than a manual. The mid-level Active is likely to sell in the biggest numbers, starting at $21,490, while the range-topping Elite wears a $25,490 pricetag.

The cheap pricing doesn’t mean Hyundai has turned the features list into a barren wasteland either. Every model gets an 8.0-inch touchscreen infotainment unit, fitted with Apple CarPlay and Android Auto. The unit is well integrated into the dash design, ditching the ‘my first iPad’ feel of other Hyundai models. The brand’s SmartSense active safety suite is also standard on every model, with a camera-based forward collision assist that works at speeds up to 60km/h, along with lane-keep assist, driver attention warning, high-beam assist, and tyre-pressure monitors. 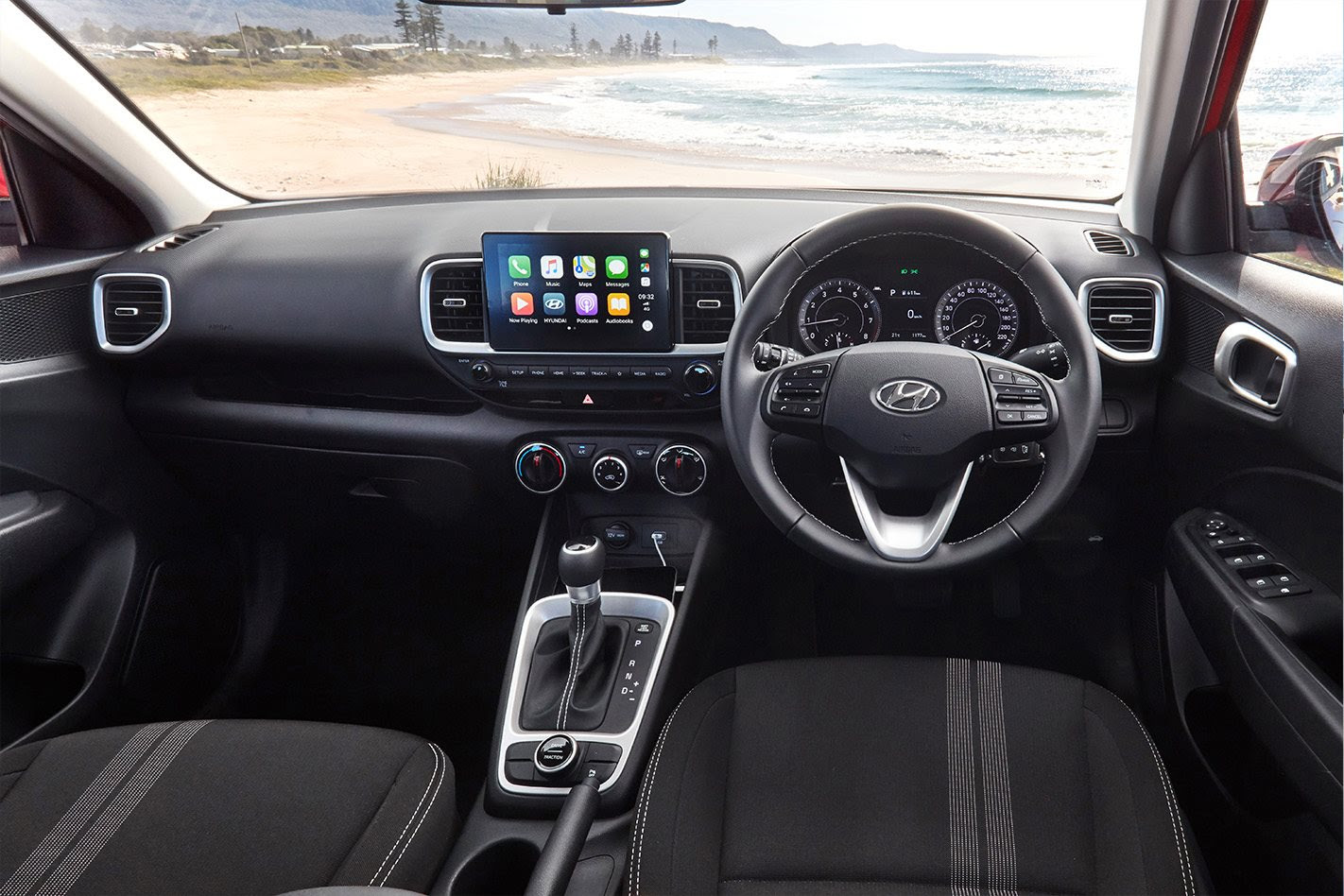 The Go has halogen daytime running lights (Active and Elite variants have LED DRLs) and rolls on 15-inch steel rims with occupants accommodated with cloth seats.

Stepping up to the Active from the Go adds $1500, bringing with it 15-inch alloy wheels, a front centre console armrest and storage box, leather steering wheel and gear knob, a four-sensor parking distance warning system, and six-speaker audio system (up from four speakers).

Elite rolls on 17-inch alloys, with chrome inserts in the front grille, LED tail-lights, two-tone roof and side mirrors, painted inserts in the bumpers, wheelarches, and side moulding, and rear privacy glass. Sat-nav also becomes standard on the flagship, along with live traffic updates, DAB radio, single-zone climate control, and an additional fast-charging USB socket. For the safety-conscious, blind-spot collision warning and rear cross-traffic collision warning is added.The Venue’s designers nailed a trick with the interior of this small SUV. It feels larger inside than expected, and rear legroom is more generous than many of its rivals, while vision in the second row of seats isn’t hampered by rising waist lines. There’s plenty of headroom front and rear, thanks to the Venue’s 1592mm height, making it taller than all rivals bar the Honda HR-V. 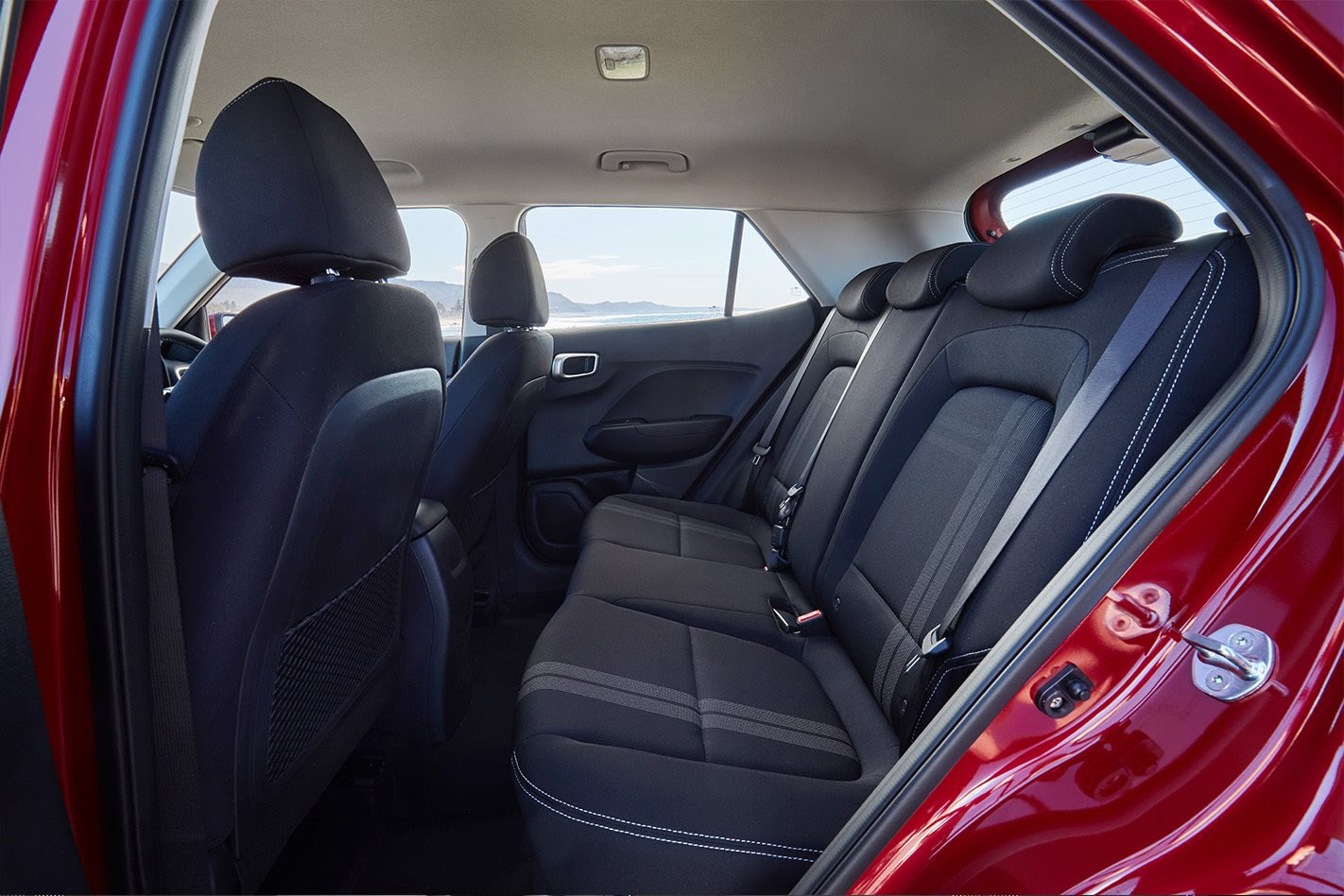 It’s also short, really short, with an overall length of just 4040mm. This is less than the Accent, and all other SUV rivals. Only the Toyota Yaris is shorter. Add a 10.2-metre turning circle, and the Venue is perfectly suited to inner-city life. Unfortunately, there is a lot of road and wind noise that intrudes into the cabin, which could make long drives more tiresome than ideal.

The 355-litre boot capacity is larger than usual for the segment. The impressive figure is no doubt helped by the two-stage boot floor which can be lowered. The parcel shelf can also be tucked away neatly behind the rear seats with ease.

Hyundai didn’t just want to make the entry cost cheap, it also wanted to ensure running costs were low as well. Servicing costs after five years, or 72,000km, add up to $1575.

This is in part thanks to the 1.6-litre naturally aspirated four-cylinder engine, which was chosen for its public perception as being more affordable to run. However, that same unit is the Venue’s biggest weakness. Its lacklustre performance means you won’t be getting anywhere in a great hurry on the open road, and it becomes rather thrashy near the top of the rev range, particularly when it approaches 5000rpm as peak torque is delivered.

This is exacerbated by the calibration of the automatic gearbox, which is eager to shift down multiple ratios at the slightest request for more power. Moderating this criticism somewhat is the fact that most Venue owners will be based in urban environments, where the engine is more than adequate for the job at hand, and will rarely venture into the upper reaches of its rev range. 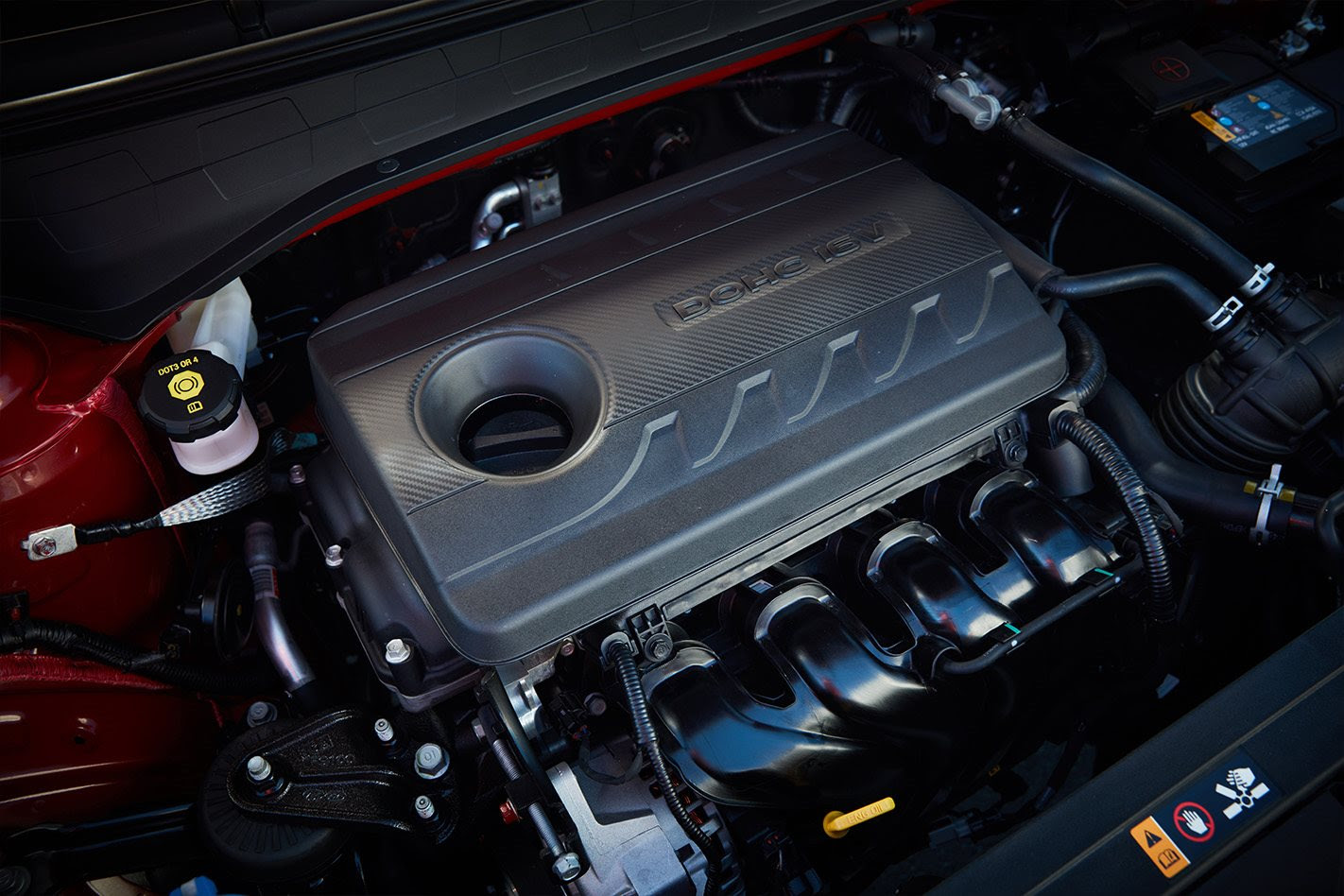 The 1.0-litre 88kW/172Nm ‘Kappa II’ turbocharged three-cylinder is offered in international markets, paired with a six-speed manual or seven-speed dual-clutch transmission. Importantly for that engine, peak torque arrives between 1500-4000rpm, while the Australian-delivered car doesn’t deliver its 154Nm to the front tyres until 4850rpm. Can we get this in future updates, please?

Hyundai is standing by the manual transmission; despite the fact that it’s likely to be fitted to just a fraction of Venues sold. Those that opt for the three-pedal set-up will be treated to a smooth and slick gear shift action, with a light clutch. It’s perfectly amicable.

As is now traditional for Hyundai, the Venue is given a specific Australian suspension tune, which is well suited to local roads. The ride is well sorted, and absorbent of bigger bumps, despite the inherent flaws of a torsion beam rear suspension set-up (with MacPherson strut up front). Steering is weightier than you would expect in a vehicle of this size, but once you get past that initial mental recalibration, you realise the rack is delightfully direct, with 2.6 turns lock-to-lock. It’s keen to turn into corners, and the chassis could even be described as playful.

The good work done with the chassis is undersold by the economy rubber that is fitted to the Venue. On the Go and Active variants Hankook Kinergy Eco2 tyres are used in 185/65/R15 specifications, which results in the front end washing out at only modest provocation. It’s slightly better on the Elite, despite it running Nexan N Fera SU1 rubber sized at 205/55/R17.

There are a trio of drive modes (normal, eco, and sport), that change the throttle and transmission mapping as desired, and do exactly what they say on the box. You’re best keeping the Venue in normal though, as sport results in the gearbox becoming as hyperactive as a rabbit on Adderall, and eco slips everything a heavy dose of Valium. Three traction modes of snow, mud, and sand are also standard, which seems a tad redundant for a front-drive soft-roader.

Despite these slight performance pitfalls, the Venue is a convincing small SUV. Its keen pricing, roomy cabin, generous equipment and affordable running costs should see it become a winner with Aussie buyers. 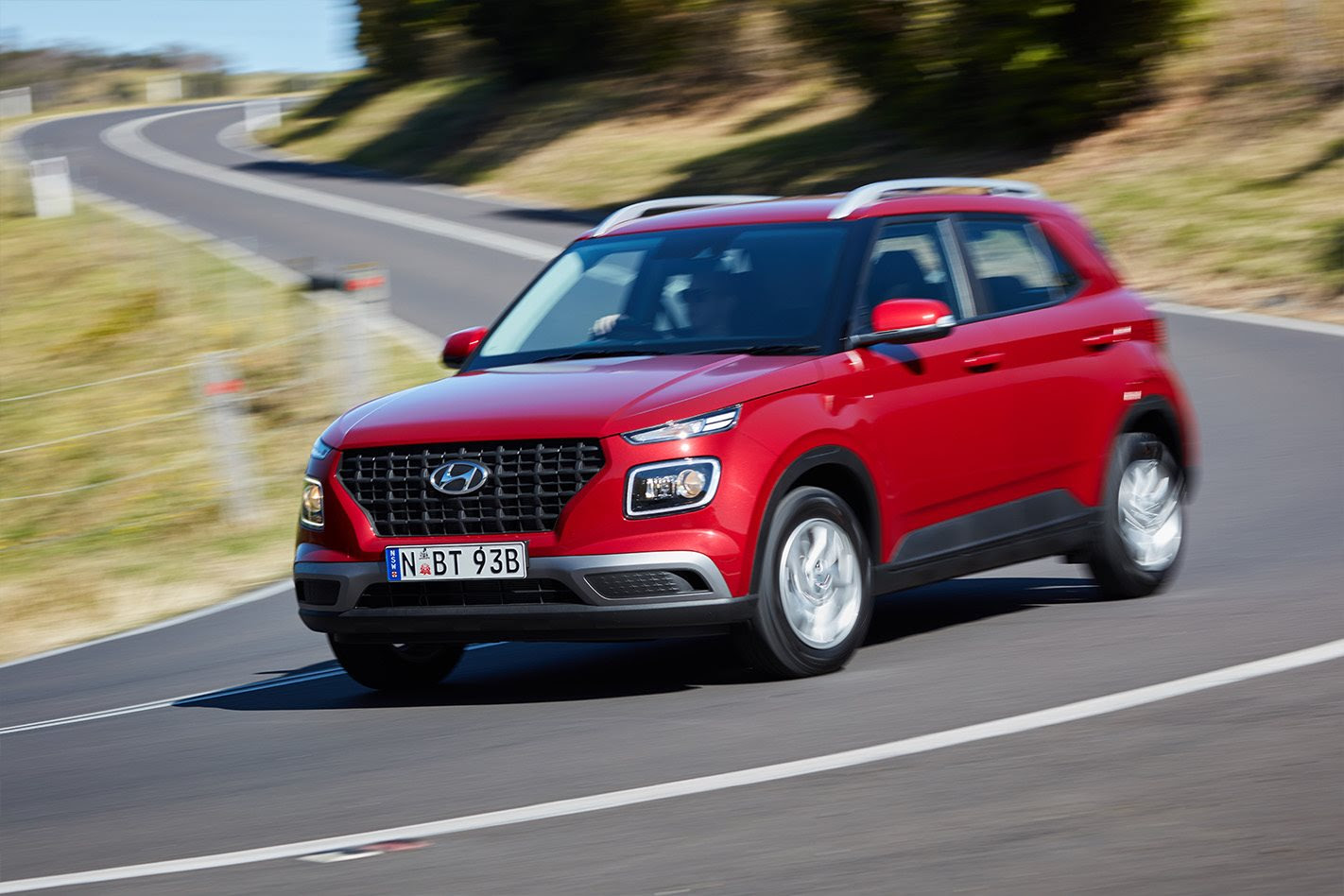 Direct segment rivals include the Mazda CX-3, Honda HR-V, Toyota C-HR, Mitsubishi ASX, and Subaru XV, as well as stablemate the Kona. However, the reality is that it’s also competing against light cars like the Toyota Yaris, Mazda2, and Suzuki Swift.