The choice between the CLA45 S coupe and the A45 S hatchback is interesting.

While the Mercedes-Benz AMG CLA45 S is mechanically very closely related to that of the A45 S hot hatch – hyper hatch if you like – it chases a rather different buyer. One looking purely for the driving experience has an easy choice: the hatch. It’s an action hero and it’s more than up to the task of entertaining. But it’s not exactly a sex symbol. Anyone who considers style an important aspect to a car will consider the CLA coupe (sedan, really) very closely. This is according to Mercedes-Benz, anyway, who will charge an extra $17,600 to be part of the CLA club, with its $111,200 asking price dwarfing that of the A45 S.

For this reason, the CLA45 S needs to be the fashionable sibling, and our test car is a fine example. While the hatch is bound to radiate boy racer vibes, the swoopy body on black wheels of our CLA with no extra-cost options is somewhat demure, hinting at its abilities through modest touches to the bodywork and its Panamericana grille. 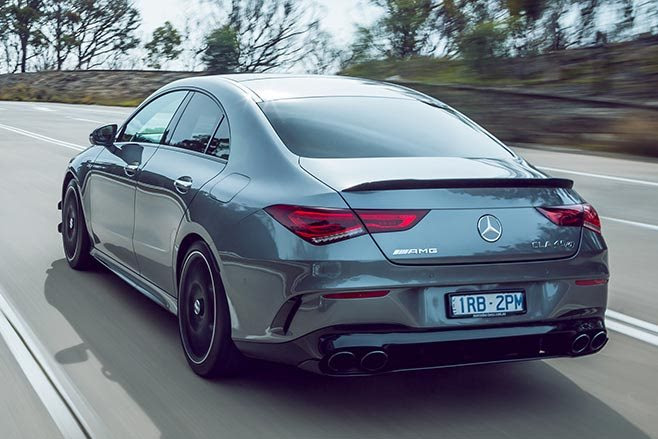 It looks more like a baby E-Class than a compact car, potentially because it’s longer than the C-Class sedan by 6mm. Its wheelbase is, however, shorter by about 110mm. But it’s underneath the skin where this new generation really needs to shine, as the outright pace of the last generation wasn’t enough to allay complaints about clunky gearboxes and a lack of character when it came to the driving experience. A stiff ride and a somewhat economically styled interior didn’t aid the matter.

This time around, the boffins at AMG were able to set the CLA45 up the way they wanted, with more input on their part rather than just having to mould what Mercedes had already designed. The CLA45 S cops a slathering of chassis upgrades over the rest of the CLA range including additional bracing in areas like the front wheel arches, a shearing plate underneath the engine, and a 4MATIC+ all-wheel drive system specific to the pair of 45s, which we’ll get to. The CLA also has wider tracks than the A45, by 8mm on the front axle and 27mm on the rear.

Undoubtedly the headline of the new generation of compact AMGs is what lies by that front axle. The M139 turbocharged inline-4 is an all-new build, sharing only some fastenings with the previous M133. The new powerplant’s outputs are even nudging early C63 territory, with 310kW and 500Nm extracted from just 2.0 litres. Built on a new assembly line in Affalterbach, the M139 has cylinders coated in a friction-reducing substance called Nanoslide, is able to nudge 7200rpm, and has an interconnected cooling system that includes wheel arch-mounted radiators. 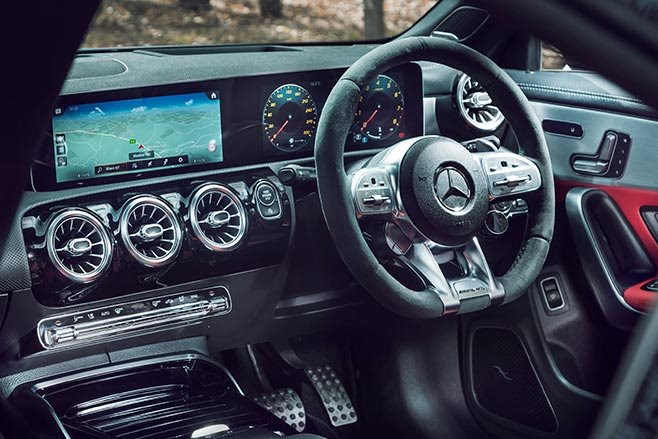 But at the same time as the engine is cool, it’s hot as hell. Its turbocharger spins to 169,000rpm and can force through 30.5psi of intercooled air, with electronically controlled wastegates ensuring boost pressure isn’t lagging behind the demands of a right foot on a pedal. AMG aimed to make this engine feel more naturally aspirated than the last, to deliver power all the way to the top end of the tachometer rather than just a big initial surge of peaky grunt.

A dyno graph provided by Mercedes showed the more gradual delivery compared to the older engine, with power peaking at 6750rpm rather than near 6000rpm, and torque building to a peak around 5100rpm instead of reaching full thrust before 3000rpm. When it’s placed in the CLA45 S’s engine bay, it’s also facing the ‘other direction’. The exhaust manifold now faces the firewall, shortening the plumbing required for it and the intake, and avoiding running hot pipes under the sump.

New adaptive dampers are one of the other talents that make the new CLA45 better than the last, with three stages ranging from genuinely comfortable to quite stiff and focussed, though neither end of the spectrum really limits what you can do from the driver’s seat. Sport+ won’t demolish your spine on a relatively rough road, while Comfort won’t stop you having fun. 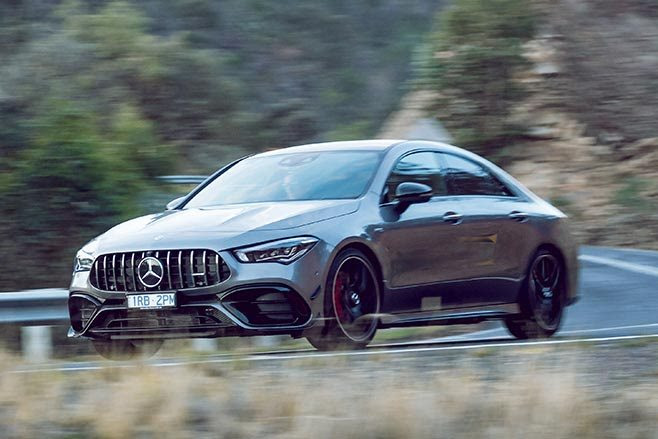 And fun on backroads you will have. The cabin of the CLA45 is quite stylishly appointed and visually calm, even with optional red accents. You’ll probably lose some of that calm when you realise that just saying ‘Mercedes’ triggers the MBUX infotainment system’s voice recognition assistant. This irritating quirk aside, there are few things to complain about from inside the CLA45, save for maybe the hard plastic hand rest for using the MBUX system’s touchpad. It looks a little bit ‘rental’ but you’ll likely forget about this once setting off.

Push the start button (while holding the right shift paddle if you’d like a cheeky rev) and you’ll hear the M139 greet you, with reportedly no false engine sounds originating from inside the cabin. There’s no button to open valves in the exhaust as with some AMG models, but the engine does get more vocal when you switch the drivetrain to Sport or Sport+. Cruise through the suburbs and the CLA is able to play the part of an executive runabout, with its compliant suspension and 19-inch wheels letting only small thuds through as you traverse level crossings or the likes of Melbourne’s tram lines.

We decided to leave those tram lines behind, however, as the desire to conquer mountain roads and winding countryside lanes struck. The CLA is up to the task, needing only a turn of the steering-wheel mounted dial to get into Sport mode, stiffening the dampers slightly and waking the engine right up. 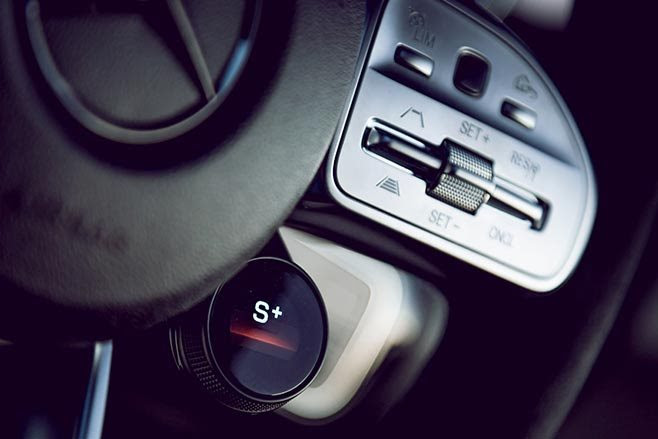 Driving hard in Sport means the body will still roll somewhat on its chassis and the engine requires your attention as it’s not at full-attack just yet. Though it’s not the most effective way to make the CLA fast, it’s one way to make it fun. Another turn of the control dial and you’re in Sport+ mode, which stiffens the dampers to their fullest and gives the engine a little more perk, while also setting the AMG dynamics control to ‘Pro’, allowing a higher degree of hooliganism from the driver’s seat. The exhaust also reaches its most aggressive by this point, though the sound of a greedy intake upfront does its best to gain your attention.

It’s also in Sport+ that the 4MATIC+’s new tune comes to front of mind, it’s Twinster-style application (similar to that of the late Ford Focus RS) producing a more rear-driven feel than the Haldex-style systems of cars like the Audi TT, which divert drive to the rears when it’s needed rather than when it might be wanted. With AMG Torque Control, the drivetrain can actively distribute torque between the rear wheels to use them to rotate the car through a corner. It’s this new system that makes Drift Mode possible, though this isn’t something we were keen to test on public roads. Even without it, the CLA45 feels keen to involve some mild tail-wagging, almost like it wants Drift Mode on. Cheeky bugger.

For more aggression, turn that wheel-mounted dial once more to Race mode. The settings are almost all the same as Sport+, but now the engine is entirely ready to attack at any time, and the 8-speed dual-clutch is keeping the revs in the sweet spot (above 2000rpm) almost constantly, snapping up the next gear in whichever direction it must with ease. It’s in Race mode where the CLA becomes searingly quick, making its 0-100km/h claim of 4.0 seconds eminently believable. 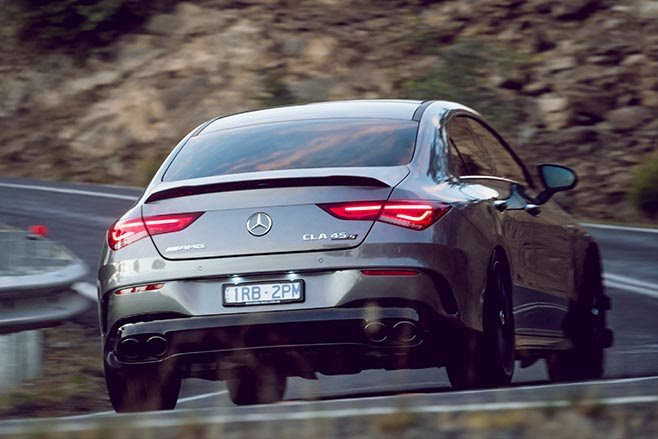 So we decided to test that claim at Heathcote Park Raceway.With temperatures approaching 15 degrees through a dry morning, we lined the CLA45 S up having been told the Race Start launch control system was patronisingly easy to use. Electronics all off, foot on brake, foot on accelerator. The engine is poised and, we assume, we’re about 4.0 seconds away from hitting 100km/h.

Foot off brake… and not much happens for a moment.

Some hesitation from the CLA to launch hard was later explained to us as the computer likely calibrating its clutches to gauge whether they’d been run in yet. We were the first to use Race Start. We managed to coax a 4.21sec run to three digits, with a 12.32sec quarter mile at 185.93km/h thanks to one smooth launch, but fears of frying clutches prevented us from pressing on to reach the magic numbers we had hoped for.

Our comrades at Wheels managed 3.9sec to 100km/h in the A45, and the fact the CLA45 S takes just 2.41sec to blast from 80 to 120km/h is confirmation the car is about as fast as it’s claimed to be, as long as it’s ready to launch. The brake distance of 34.99m from 100km/h is a testament to the AMG’s 360mm front discs with six-pot callipers, paired with Michelin Pilot Sport 4 S tyres measuring 9 inches wide at both ends. 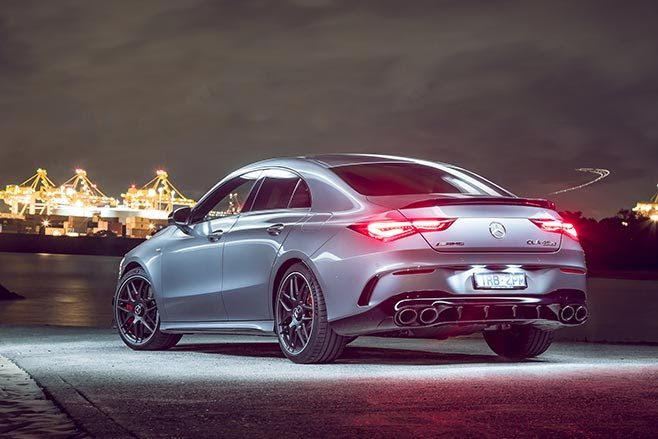 The disappointment of our Heathcote visit melted away once we were back on winding roads. The playful demeanour of the CLA45 S emerges from beneath that sly facade, again urging you to make use of the most powerful production four-cylinder engine in the world. Much of the criticism levelled at its forebear is forgotten, as the new kid is ready to play along to whichever script it’s handed.

Unfortunately, like a capable actor, the cost will make you question its value. Consider the $93,600 A45 S and your priority for style may waver, though look at the price of a (slower) AMG E53 Coupe at $180K and you might feel a bit better. From outside the AMG stables, the obvious rival in BMW’s M2 Competition is set to be a short-lived one as the CS approaches and the sub-$100K Competition Pure ends its time on sale. Is the M2 as much of a fashion statement? Perhaps not, but its ability to impress dynamically is hard to top.

The temptation to award the CLA45 S 4.5 stars is immense, not just for the satisfying ‘45’ match-up, but also that there are 17,600 reasons it probably shouldn’t be given the same score as the similarly able A45 S. Still, car buyers remain the directors of their own motoring stories, and sometimes it’s better to have a CLA45 S fulfilling your need for speed than, well, Tom Cruise.