Ride, style and infotainment go up a notch…..

The Wheels Verdict: We criticised the pre-facelift GLC’s ride for being too firm on the car’s standard steel-sprung suspension. The Series II facelift addresses that concern. The result is a softer ride that’s well attuned to the demands of urban driving but may be less fulfilling for the driver who relishes a more upbeat tempo on B-roads outside the big smoke. Options offer a way past this, with active dampers that were previously the reserve of the GLC Coupe, or air-suspension with active dampers and adjustable ride height. Big boosts to infotainment and style are sure to win over customers in the showroom, while new engines strengthen the offering, and don’t have us yearning for the missing diesels.

WHAT IS THE MERCEDES-BENZ GLC 300?

If you wanted an unsung hero of Australian new car sales, the Mercedes-Benz GLC is it. Introduced locally in 2016, it rocketed to the top of the pops for the mid-size luxury SUV market with consumers. In fact, the GLC was Mercedes-Benz’s most popular model last year, making it the most popular luxury car in the country outright. The mid-life Series II facelift has now arrived on our shores, in the hopes of maintaining the attention of buyers against more modern additions to the segment like the Range Rover Velar and Volvo XC60. 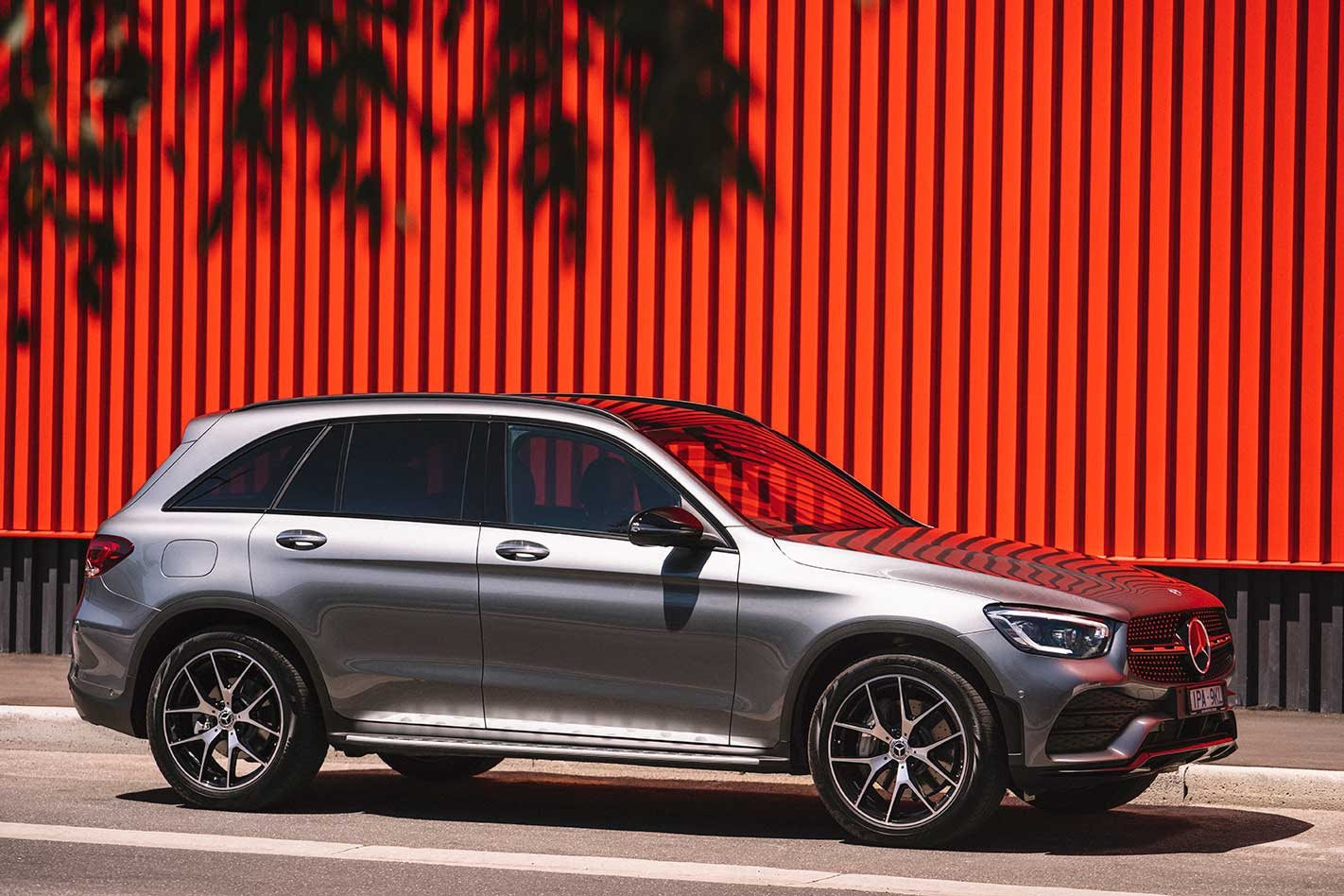 Remastering a fan favourite album has its risks, and it’s our job to see if Mercedes has done the job right with the GLC facelift. In order to freshen up the mid-size SUV, Mercedes has performed the customary visual tweaks, but also conducted some important mechanical changes. Both the engine and suspension has been changed, so it’s time to see if the GLC is still singing the same tune that vaulted it to the top of the charts.

It’s been three years since the GLC arrived on Australian soil and immediately began being driven away from showrooms in droves. In order to keep the luxury high-rider popular, a Series II facelift has been introduced, bringing with it some small but important changes.

Exterior styling has been tweaked, with new lights front and rear, along with new wheel designs, and reshaped lower bumpers fore and aft.

Mercedes-Benz’s MBUX infotainment has been added as standard, which is a massive boost over the old system, while the active safety driver-assistance package has been expanded. With MBUX comes the “Hey Mercedes” command system that we are familiar with in the A-Class. However, some other MBUX features that are available in other markets, such as the augmented-reality navigation system, aren’t fitted to GLC models at launch.

The model line-up for the facelift sees the diesels ditched in favour of a new plug-in hybrid 300e. The old GLC 250 morphs into this GLC 300, Mercedes reasoning its boost in outputs warranted a new name.

Engine sizes remain unchanged for the 200 and 300, with a 2.0-litre four-cylinder turbo fitted under the bonnet of each. However, gone is the M264 unit, replaced by the M274, which brings improved performance. 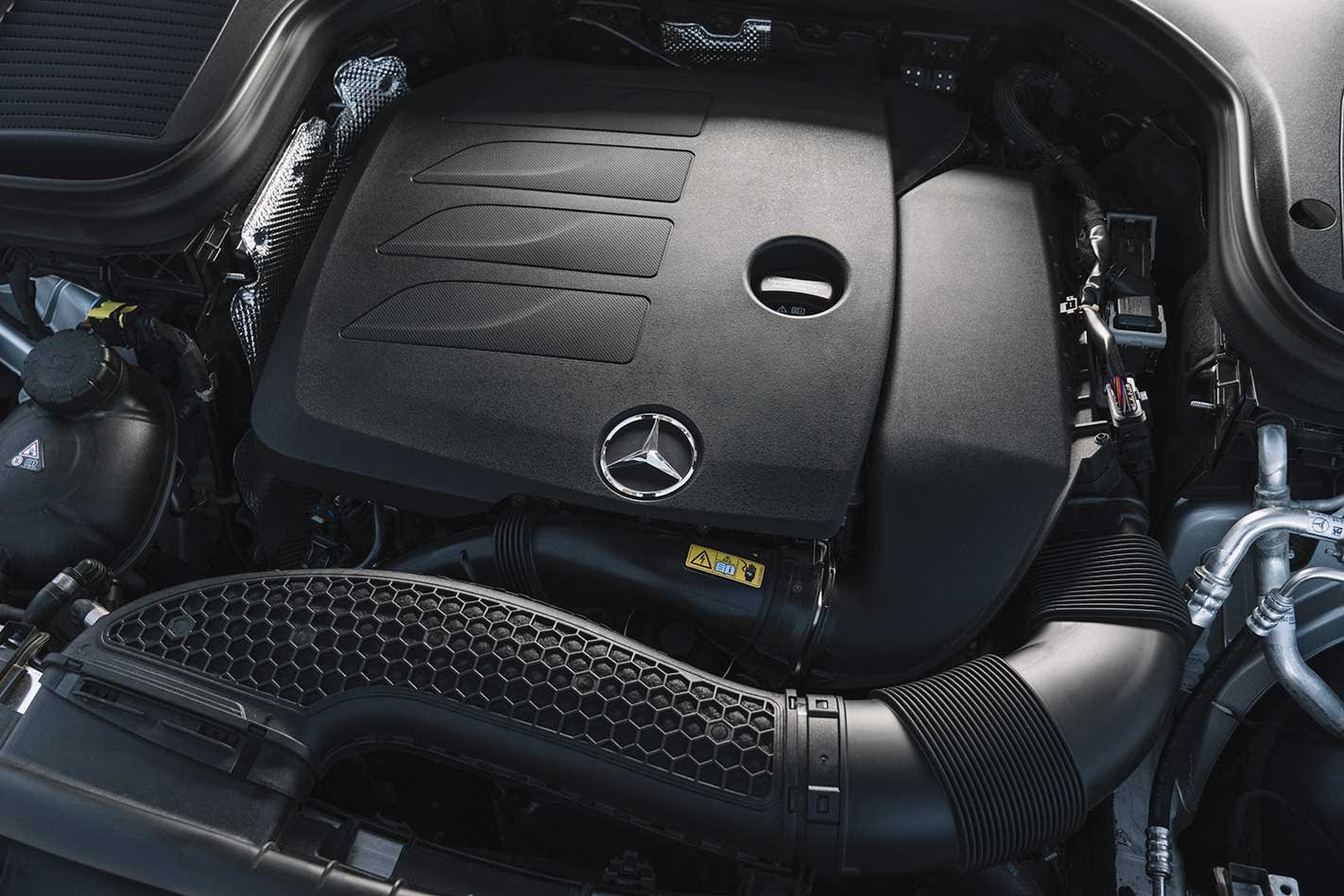 The GLC 200 now sends 145kW and 320Nm to the rear wheels (an increase of 10kW and 20Nm compared to its predecessor) via a nine-speed automatic, shaving two tenths from the previous car’s 0-100km/h time for a claimed 7.8sec sprint.

Both units are perky, and perform the job admirably, though the 300 is our pick for those spending more time out of town due to its more relaxed character. 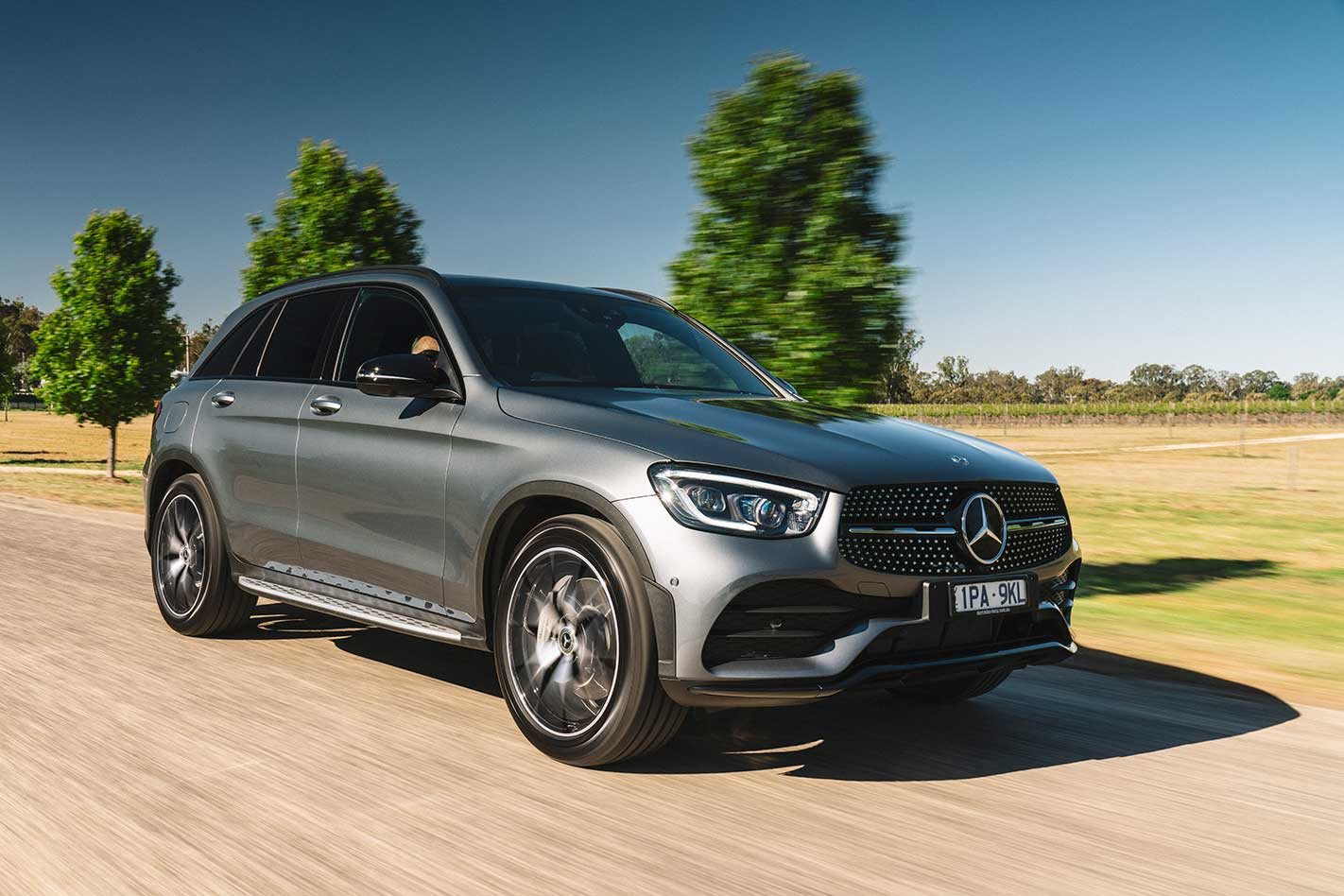 When the GLC first arrived in Australia, Wheels criticised the ride as too harsh. On this, we have both good and bad news. The good news is that the sometimes overly firm character of the steel-sprung car has been banished. The issue is that the new set-up feels like a slight over-correction. While there’s now a pleasing softness, especially in urban driving (which is, admittedly, where most GLCs will spend the majority of their time), if you’re the kind of buyer who enjoys some spirited B-road running, you’ll find that this newfound relaxed attitude towards body control dims the fun somewhat.

Our test cars rode on Pirelli Scorpion Verde run-flat tyres in meaty 255/45R20 spec (standard on the GLC 300, while the GLC 200 is fitted with 19-inch wheels from the factory).

Importantly, however, our criticism of the ride applies only to steel-sprung variants. Mercedes will offer three suspension set-ups on both the 200 and 300. Adaptive dampers are now available on the options list for the first time for $1900 (previously this was reserved only for the GLC Coupe), while those seeking even greater poise can tick the box for a full air-suspension set-up with adaptive dampers and an adjustable ride height. 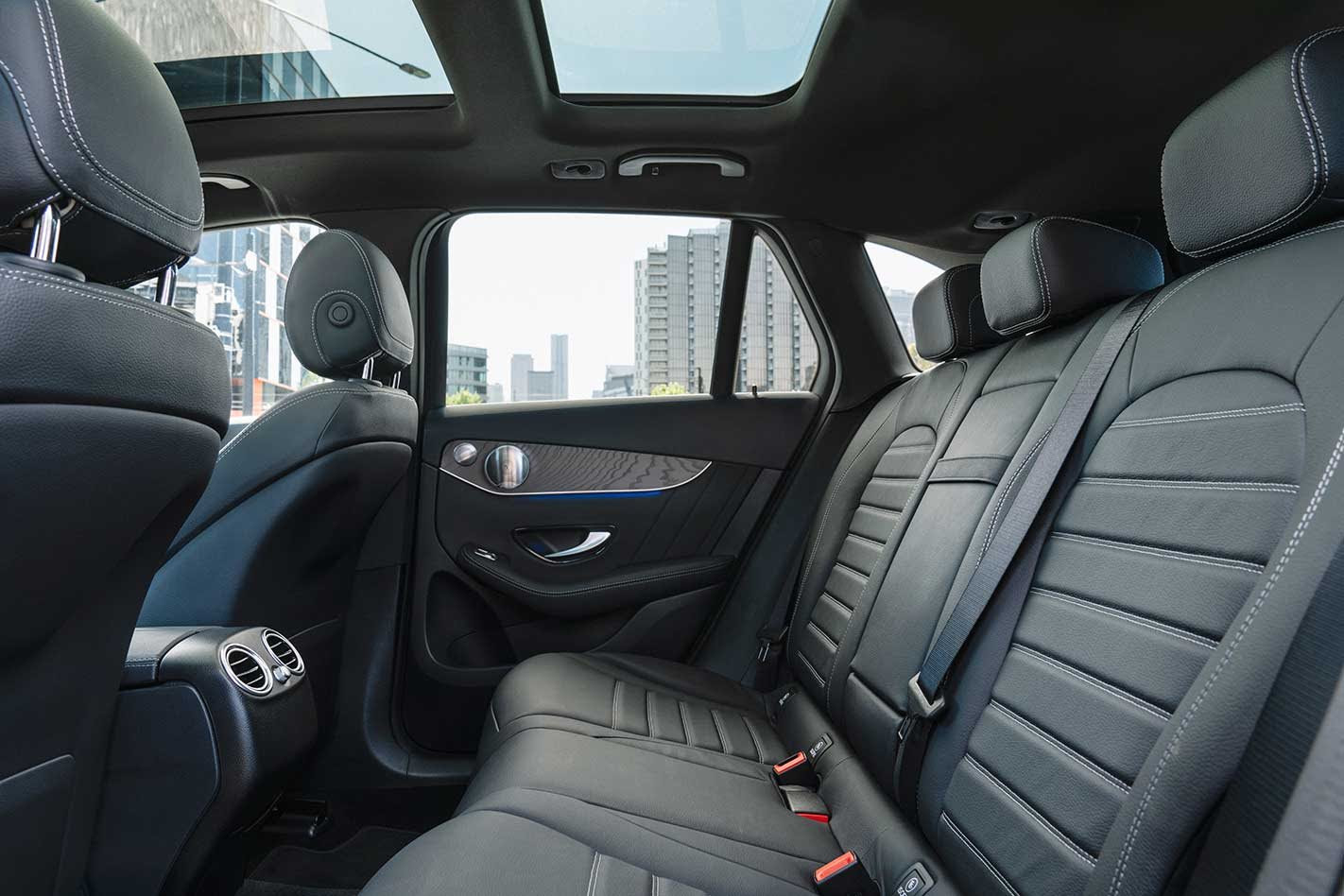 Only steel-sprung cars were available for us to drive at the Australian launch, so we’ll reserve a full judgement for when we drive cars fitted with adaptive dampers early next year.

The only other niggle with this facelifted GLC is that aside from the MBUX update, the cabin is largely unchanged and is now starting to feel its age in a segment flush with fresher rivals. Still, the GLC is the most popular luxury SUV currently on sale for good reason, and the refreshed model should see this trend continue. 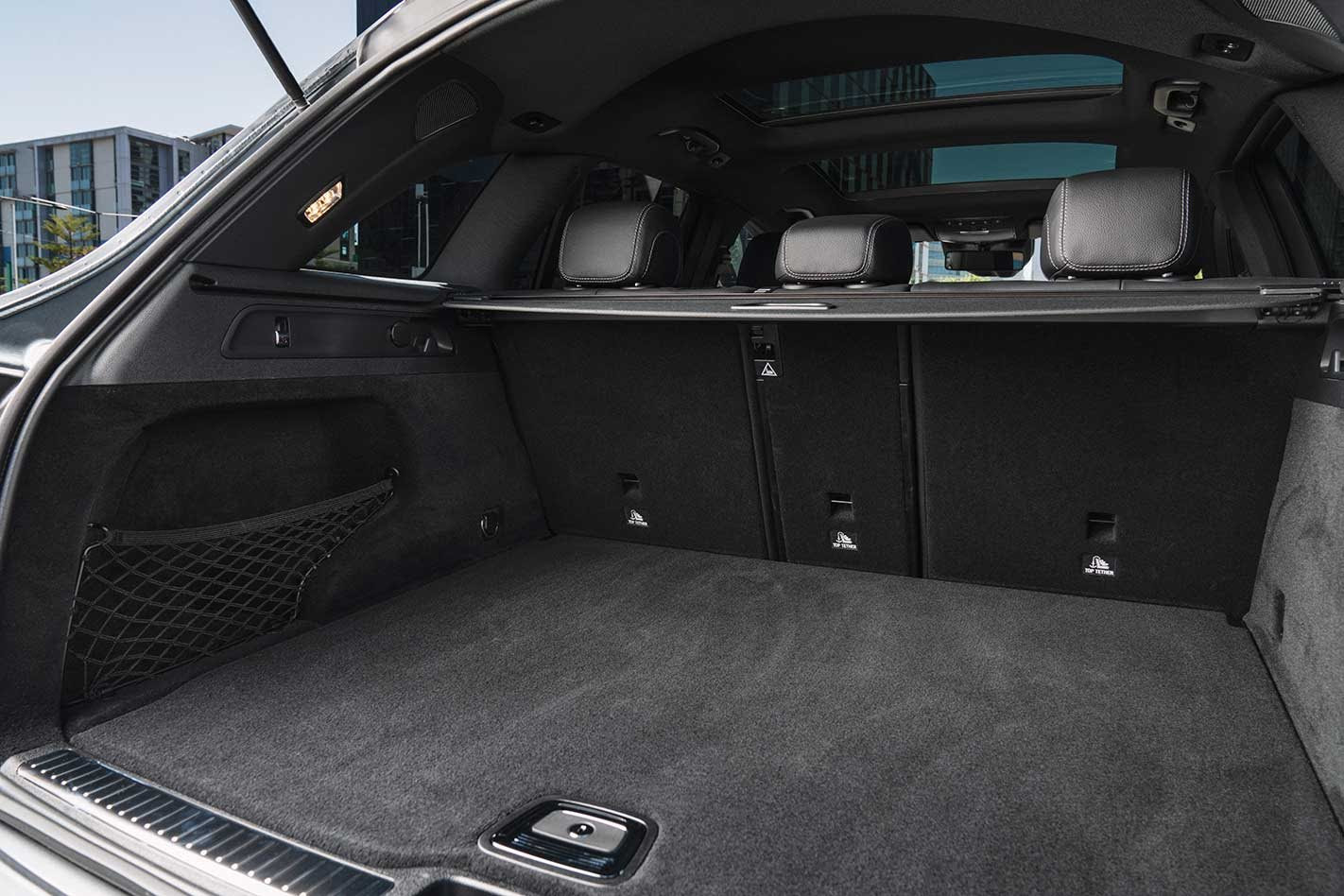 Audi Q5 and BMW X3 are the most logical rivals, while the Porsche Macan, Jaguar F-Pace, Alfa Romeo Stelvio, and Range Rover Velar present more style-driven alternatives. All are competing against the mighty COTY-winning Volvo XC60 which remains the class benchmark.