How Porsche’s Cayman GT4 shot for the moon but missed

The Wheels Verdict: The Porsche 718 Cayman GT4 isn’t without some fairly fundamental caveats, but the majority of its dynamics are truly excellent. Unless you are absolutely wedded to the notion of a manual gearbox, do yourself a favour and wait for the quicker, more efficient and more suitably-geared PDK twin-clutch version. 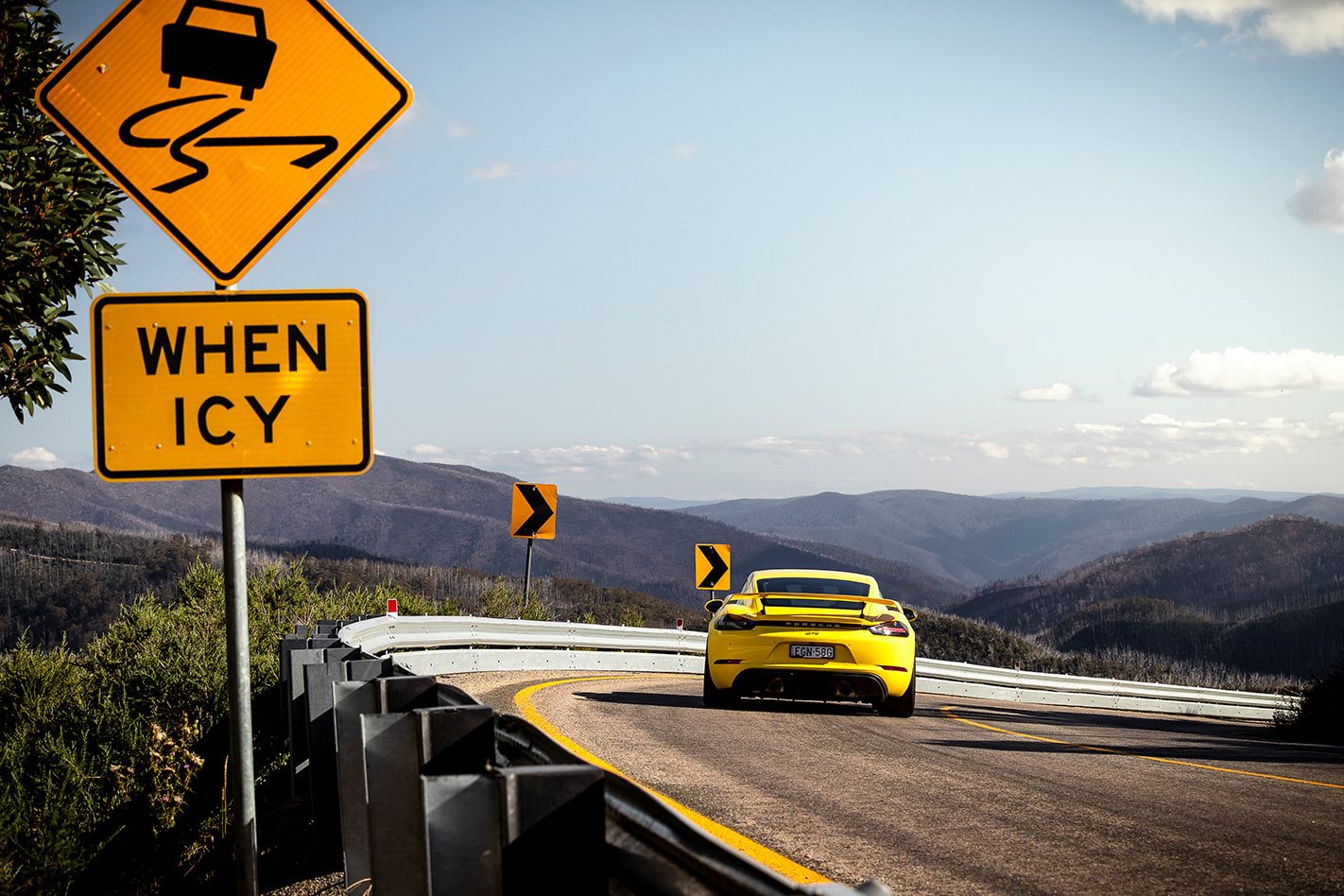 WHAT IS THE PORSCHE CAYMAN GT4?

The last time Porsche sold us a GT4 version of its entry-level Cayman coupe, that car was on sale for a mere 18 months. Blink and you missed it. Now we have a more powerful GT4, propelled by a 4.0-litre naturally aspirated flat-six and stirred into life with a manual gearbox. Purists rejoice. Has Porsche finally let the Cayman off the leash?

Wheels had already had the opportunity to drive the Cayman GT4 – albeit briefly – on a track in Scotland and it had impressed editor Alex Inwood. We were keen to discover whether its talents translated to Australia’s roads, so we pointed it at one of the very best. If the Porsche could shine on the Alpine Ring in the Victorian high country, it would be in elite company. 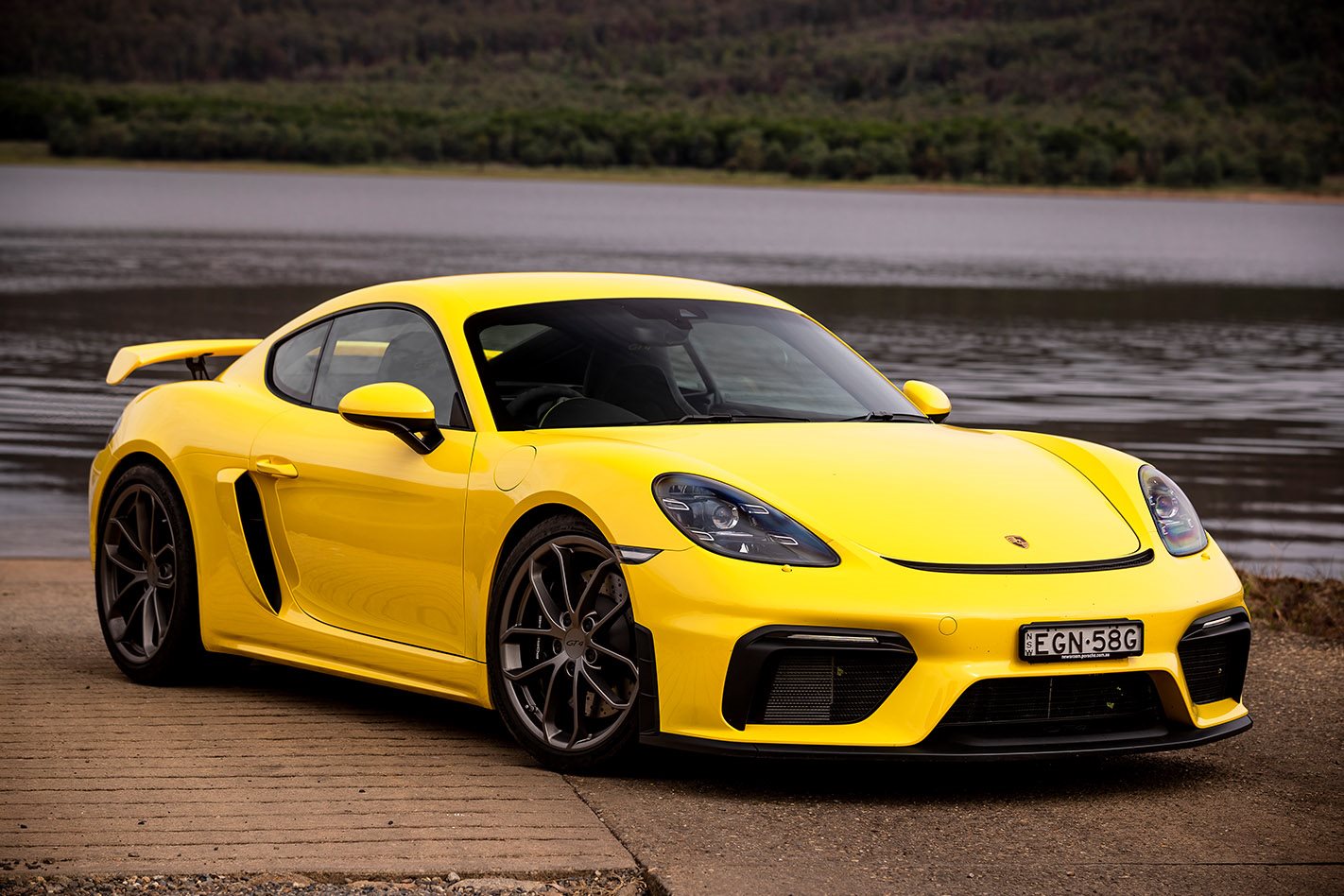 I want to believe. That was the whole ethos of The X-Files, wasn’t it? That suspension of disbelief, willing something to be true in the face of all contradictory evidence feels familiar.

I’m sitting by the side of the Great Alpine Road, writing notes on a Porsche Cayman GT4. I thought this car would be near flawless and would redefine the mid-engined sports coupe. I wanted to believe. But looking at my list of equivocations, it’s clear that I don’t.

Some context is probably due. By most other manufacturers’ yardsticks, the 718 Cayman GT4 is a triumph, an almost ludicrously extravagant melange of talents. Its problem is that , at the same time, it’s possible to be a truly excellent sports coupe yet a merely good Porsche.

The GT4’s issues can be largely attributed to the protuberance emerging from its centre console and an excess of pedals in the footwell. Now, I love a good manual transmission, and as far as the shift action of this six-speed goes, it certainly qualifies. Where Porsche has erred is in fitting ludicrously long gear ratios, a blindspot not only suffered by the GT4.

First gear will take you to around 84km/h, second will ping off the 8000rpm rev limiter with 137km/h on the clock, with third only singing its heart out at a custodial-sentence 195km/h. This represents a major problem for a naturally aspirated engine that demands to be wrung out. While this isn’t any great hindrance on track, the fact that you can only rev the GT4 out legally in first gear somewhat limits the GT4’s appeal for on-road driving. The particularly long second gear also means that you need lots of revs on the board to slot it into the sweet spot of third. 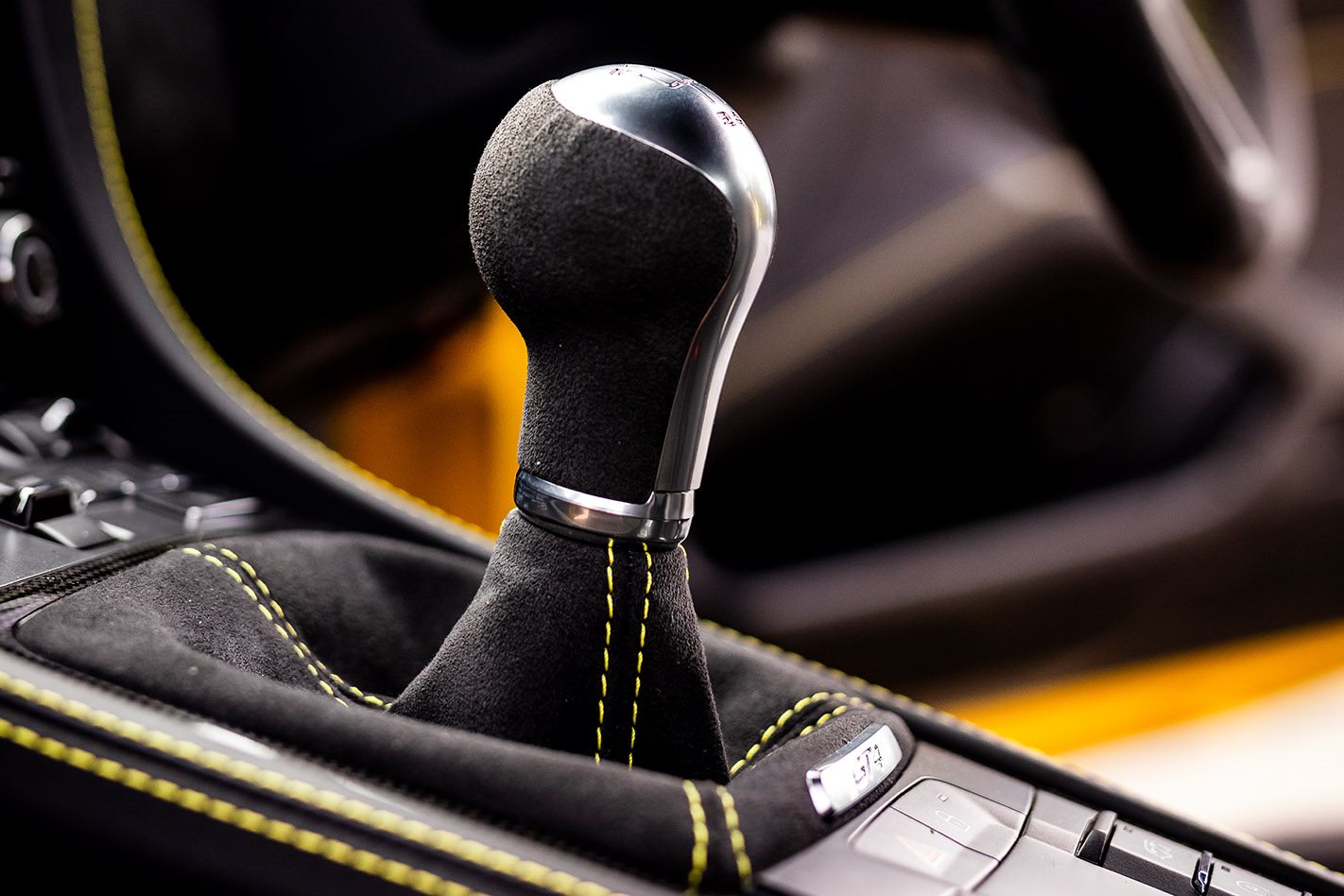 There are a few work-arounds for this. The first is to simply wait. The Cayman GT4 will be launched later this year with a seven-speed PDK dual-clutch transmission that will alleviate the issue somewhat. The second is to fix Porsche’s emissions-based decision. This will also involve a wait and some expense while tuning companies develop a custom gear set for the GT4, much as they have done for the previous 981 GT4. Again, not ideal. The other option is just to put up with this fairly fundamental flaw.

The reason why the gearing stands out like a blinding beacon of ineptitude is because most of the rest of the GT4 is just fantastic. Not perfect, but closer than most. The 4.0-litre engine makes all the right moves on paper, yet it’s never quite as satisfying as the Mader 4.0-litre from the 991 GT3, lacking that car’s musicality and operatics. Perhaps it’s unfair to expect a unit derived from that of a Carrera to be able to hit GT3 top notes, but it’s a fact.

Read next: What is GT4 racing?

Most of the time, the car finds its natural cadence at around 3000rpm, whereupon the accompanying note is a charmless, mechanical blare of discordant frequencies. Go harder and the tone tautens and introduces a little induction overlay, but it’s not a soundtrack you’ll tend to get misty-eyed over. It sounds purposeful and angry at the top end, but never exotic, melodic or transcendent.

It’s certainly quick enough. Sharp starts from a standstill aren’t it natural forte though. At the drag strip we achieved an unspectacular 4.7 seconds to 100km/h, so don’t be tempted to eyeball an A45 AMG at the lights. The 309kW boxer prefers it when you’ve got better than 3000rpm on the board, making its peak torque figure of 420Nm at between 5000 and 6800rpm. Peak power arrives at a heady 7600rpm, this engine being limited to an 8000rpm rev limit because the clever piezo injectors can’t function at any higher revolutions. It’s not an inherently peaky engine, however, and anywhere between 4000 and 8000rpm is enough to get the GT4 up on its toes, which helps with the gearing issue. 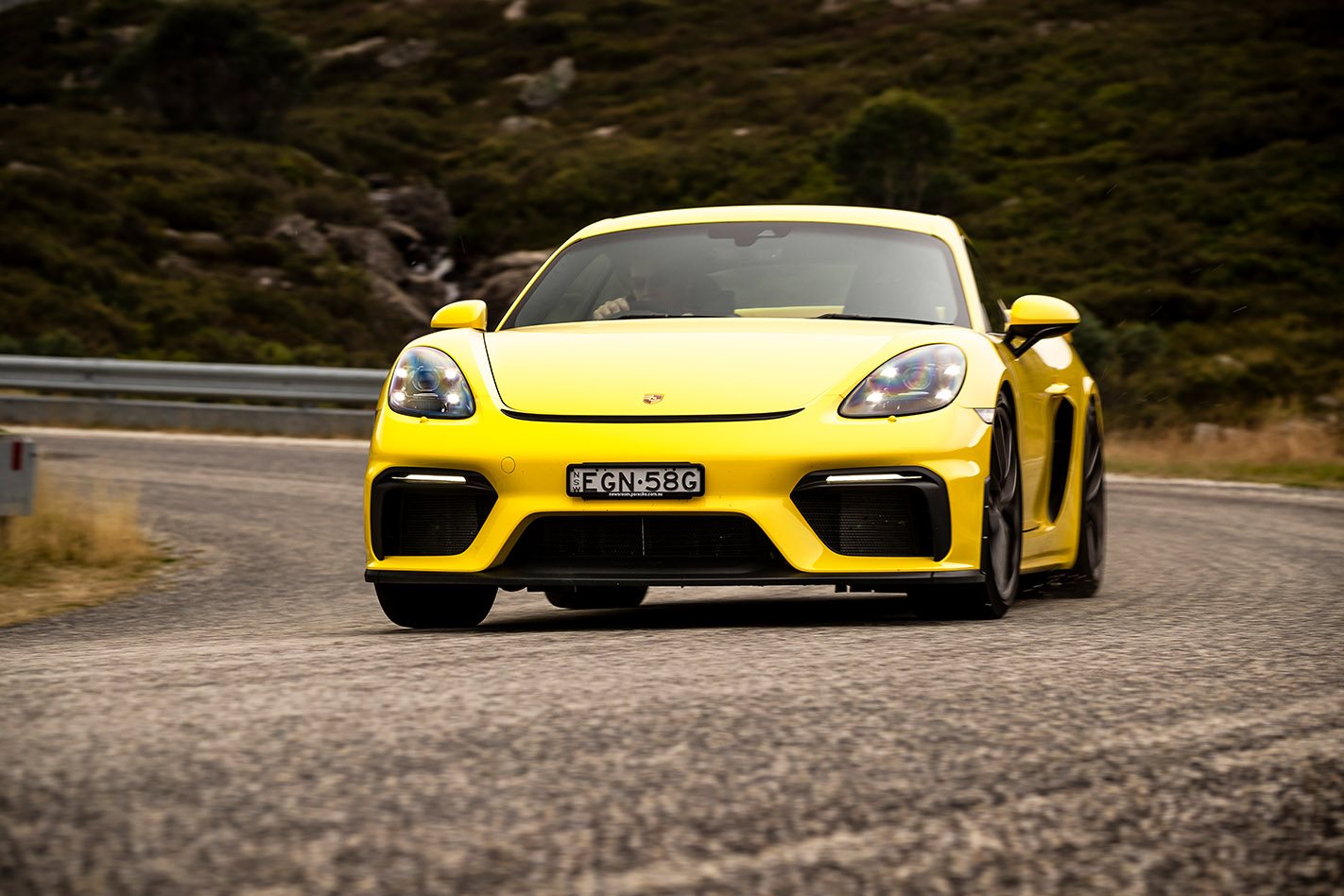 The delicious electrically assisted steering and almost uncanny body control combine with huge levels of mechanical grip to instil enormous confidence when cornering. Drive goes via a mechanical limited-slip differential, so you don’t get the clever Porsche Torque Vectoring Plus voodoo of the PDK-equipped GT3’s electronically controlled diff, but such is the weight distribution of the Cayman that traction levels on corner exit feel almost four-wheel-drive good.

That it’s preternaturally composed is hardly a surprise when you consider what lies beneath. The front axle is pretty much a straight lift from the 991 GT3, supporting GT4-specific 20-inch alloys shod with Michelin Pilot Sport Cup 2 rubber. The rear end shares more with its 718 siblings, but you’ll spot inverted dampers and control arms and subframe again purloined from the GT3.

Read next: No manual 911 Carreras for Australia

The massive rear wing is said to generate 20 percent more downforce than the item on the previous GT4, and is aided by an underbody diffuser from the GT4 Clubsport racer. In combination, aero and tyres are the key contributors to a 7min30s Nurburgring lap time which is quicker than the Carrera GT V10 hypercar from 2004.

The brakes are very good, with respectable bite and progressive modulation. The 380mm iron discs front and rear are grabbed by aluminium monobloc calipers, six-pistons up front and four-pots at the back. Should you not feel too confident in your footwork there’s a very competent auto blip function that rev-matches for you, but if you’re pointedly buying a manual car, you ought to have that skill taped. 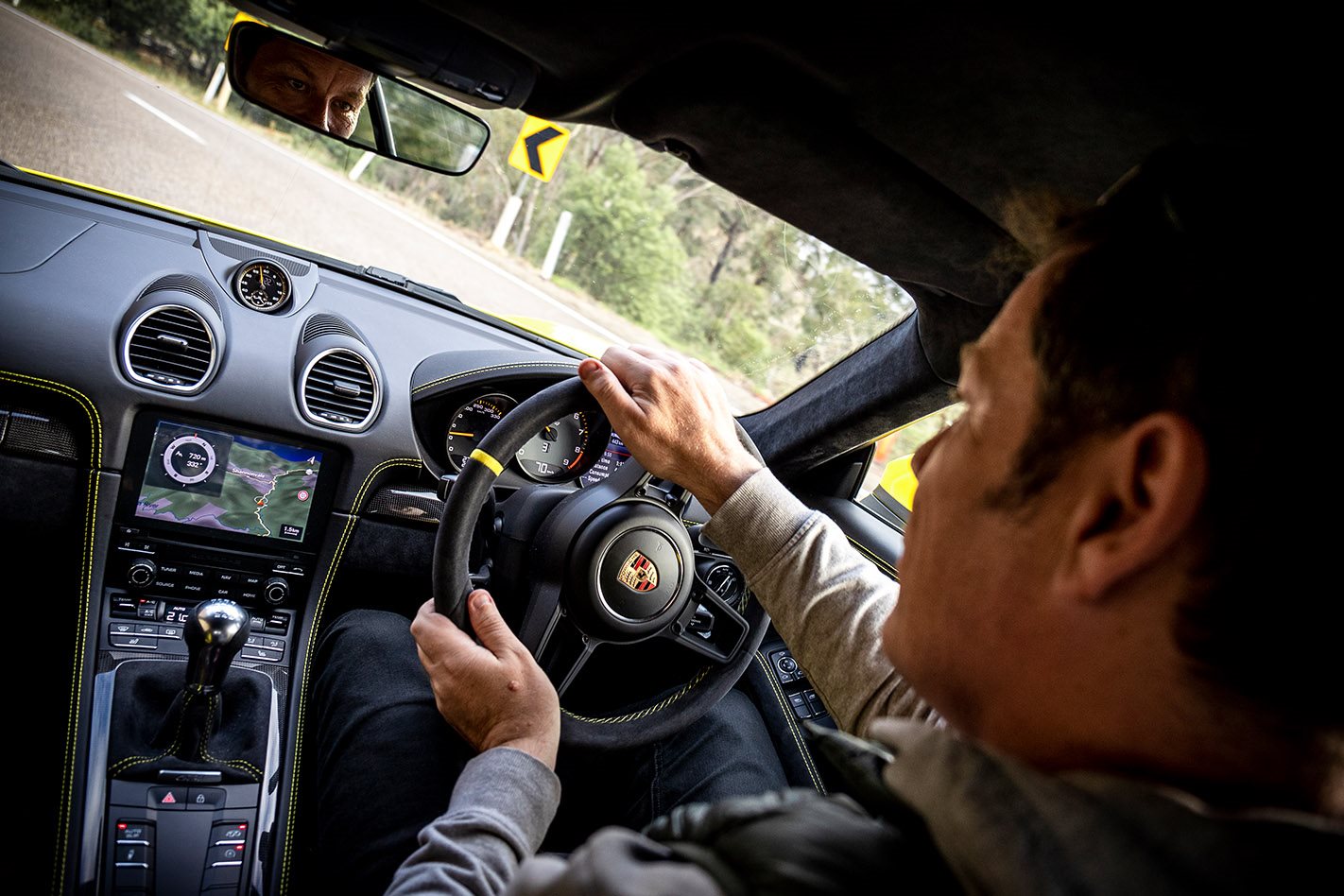 The cabin of our test car is nicely finished but contains a significant amount of optional tinsel. The coloured belts, the carbonfibre panels, the contrast stitching, the adaptive sports seats, the Bose stereo, the chrono pack, the Alcantara sun visors, the folding mirrors and the steering wheel’s centre top strip are all cost extras. Pare that lot back and you’d have a more proletarian cabin and one that feels very snug with a dearth of stowage space. Does this matter? If you’re using the GT4 as a track toy, probably not. As a road car, maybe, but then the mechanically-similar 4.0 GTS is probably a better option on roads.

So what are we left with? As a car that can be driven to a track day and back the long way, the 718 Cayman GT4 takes a lot of beating. Across the Victorian high country test route, it excelled, the engine generally grunty enough to make up for the gearing issue, but the flipside of that is that this is a car you’ll probably only ever shift between second and third in when driven hard. That’s a waste.

Read next: Would you buy the Porsche Cayman GT4 or one of these six wildcards?

We arrive in Bright after 425km of corners and attempt to take stock. Perhaps the weight of our expectation has given the 718 GT4 too big a hurdle to overcome, but this feels like a car that’s nine-tenths there. That would, by most standards, be an excellent outcome, but the GT4’s shortcomings of gearing and acoustics matter, especially when it’s coming from a company that is normally so pedantic about exceeding our expectations in areas such as these.

The definitive book on Porsche’s history sits on my shelves at home. Written by Karl Ludvigsen, this four-volume set is called Porsche: Excellence Was Expected. The Porsche 718 Cayman GT4 is an excellent car. But, sometimes, mere excellence isn’t enough. 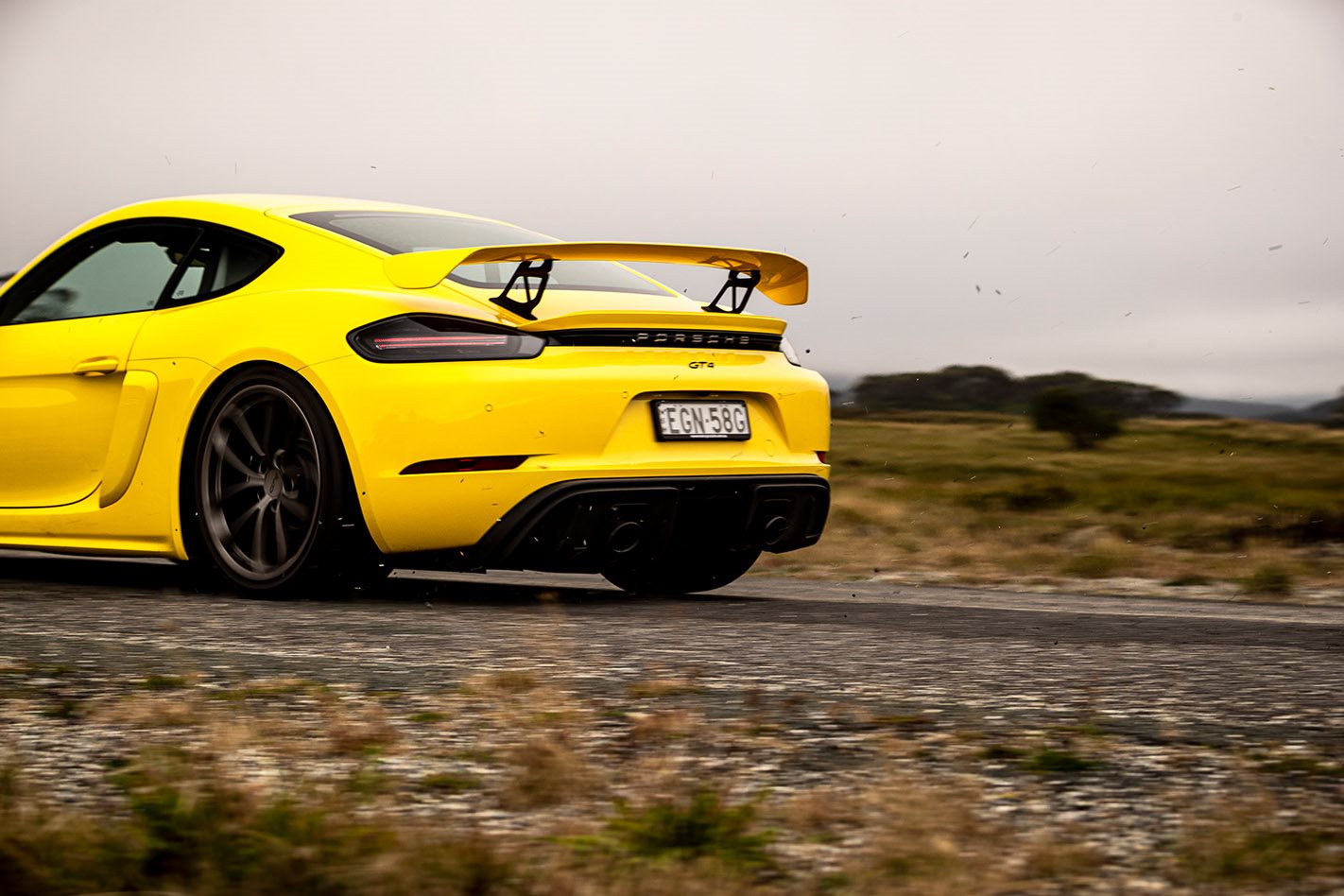 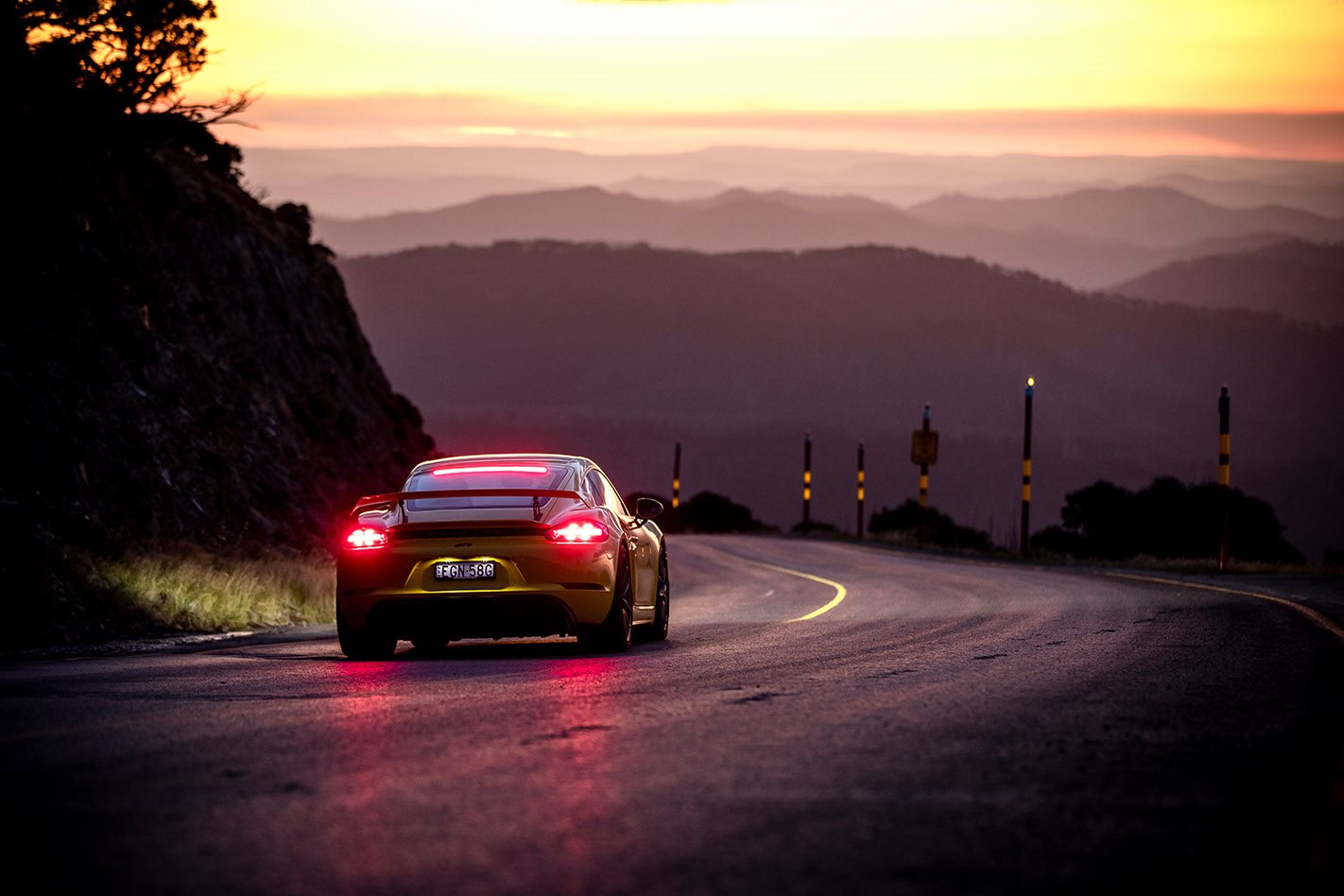