Volkswagen T-Roc: yet another small SUV/Wagon?

Has this one got points of difference?

For a new car, the Volkswagen T-Roc is pretty well seasoned. Perhaps ‘new to us’ would be a better description, as the T-Roc concept first appeared at the 2014 Geneva Show. It arrived in European dealers in 2017, but has taken another three years to finally make landfall here in Australia.

Volkswagen is adopting a toe in the water approach with this car, initially just offering a premium all-wheel drive 140kW version as driven here, but has backed it up with a more affordable 110kW front-driver as well. The importers haven’t given up hope of landing the 221kW R version of the Portuguese-built crossover either.

First impressions are promising. The design is cohesive and modern, with some interesting details like the daytime running lights that encircle the front air intakes and the chrome fly line that runs from the mirrors to the tail lights. There are some deft transitions from the setsquare design language to soft curves, such as where the chunky C-pillar morphs into the voluptuous rear wheel arches. It’s not gratuitously ‘coupe-SUV’ in its proportioning either. A 158mm ground clearance means that you’re probably not about to take it mud-plugging, but the Haldex-based all-wheel drive system offers additional capability in adverse weather conditions.

Step inside and some of the sheen is taken off the initial promise. The dash layout is neat, logical and fairly easy on the eye, but materials quality is, well I would say average but that would be paying it a compliment. Hard plastics abound, with only a few token soft touches. Granted, it looks ultra-durable but after stepping out of something like a Mazda CX-30, the T-Roc’s scratchy materials, flat pleather-look seats and hollow door slam sounds have you wondering what the margins on this $41K car must be like.

Look beyond the superficial, however, and there is substance here. The packaging is fundamentally good, with decent space up front and reasonable kneeroom and headroom (for a relatively compact crossover) in the rear. The 2596mm wheelbase is actually 41mm shorter than a Golf Mk7, so temper your expectations if you regularly carry long-legged adult passengers. Thoughtfully, the optional sunroof doesn’t impinge on rear passenger headroom, and as a result, there are bulging recesses in the headlining for taller passengers. 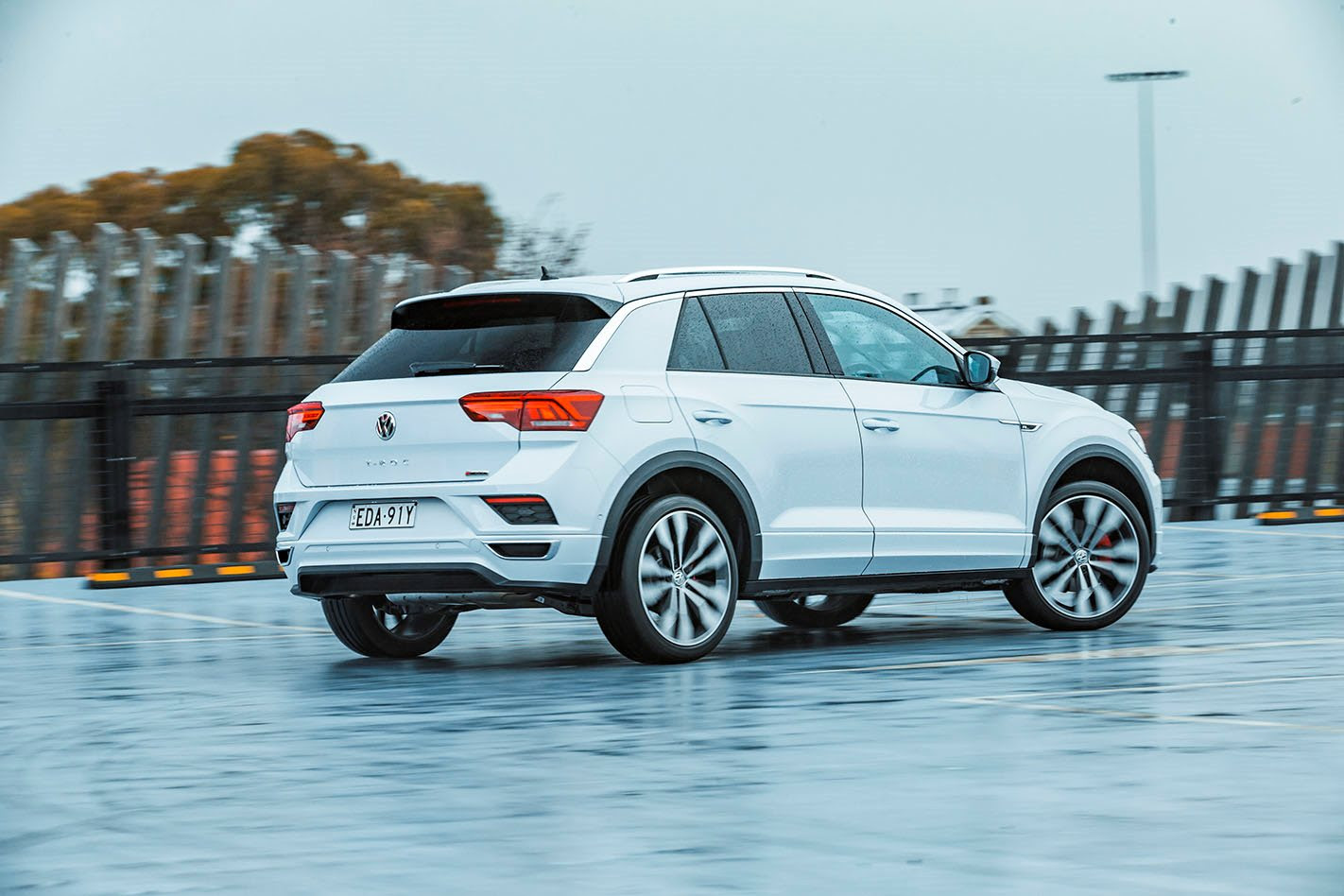 Making space for the all-wheel drive system on this model means that boot space is reduced a few litres to 392 litres to the parcel shelf with the seats in place. That compares to 380 litres for a Golf 7 or 381 litres for a Golf 8, so there is a modest practicality benefit in opting for a T-Roc.

At this point it ought to be mentioned that this press car is carrying a lot of options, most notable two packs that we’d imagine most owners would be tempted by. The $2000 Sound and Style package includes 19-inch alloy wheels, a 300W Beats stereo with an amp and sub-woofer setup along with, somewhat egregiously, adaptive dampers, more on which later.

There’s also a $3500 Luxury pack, which adds heated front seats, that panoramic glass roof, an electrically operated tailgate, and the not-100 percent leather Vienna ‘leather-appointed’ seat trim. Even with this little lot, there are some equipment items that you could reasonably expect to find on a car that’s nearing $50K before on roads. There’s no head-up display, no electric adjustment for any of the seats and no heated steering wheel. Wireless phone charger? Nope. Around-view parking monitor? Nope. Metallic paint is also a $600 option.

The key for the T-Roc is the classic Volkswagen flick-knife design, so you flick out the blade, look for the key slot and remember that this is 2020 and there’s no keyhole. New(ish) car, old key fob. 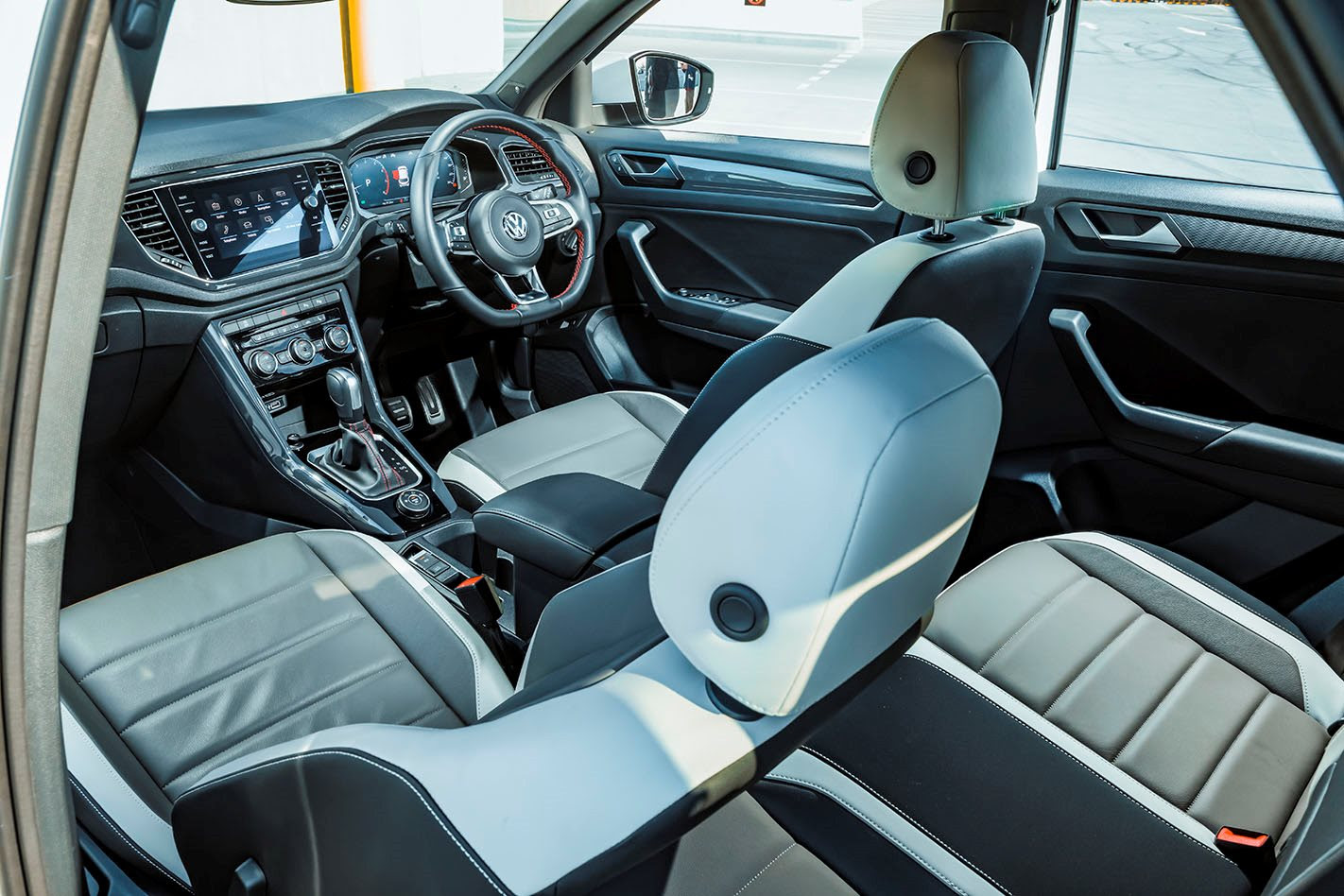 The 140kW/320Nm four-pot isn’t the most refined at idle, but it’s a fundamentally good engine. Pair it with the T-Roc’s all-wheel drive system as we did on a very wet and greasy day in the Dandenongs and you have a combination that’s capable of deploying almost all of that grunt out of tighter corners.

The seven-speed dual clutch ‘box is a willing participant and it’s helped by the fact that body control is very good indeed and there’s a slick Custom mode where you can specify damper rates, gearbox response, steering weight and so on. Besides that, it’s easy enough to shuttle between the two other drive modes that you’ll probably use – Comfort and Sport.

The adaptive dampers deliver a genuinely different feel. In Comfort mode they’re ideal for wafting along a freeway, whereas when amped up into Sport, they deliver a more nuanced read on what’s going on at the four tyre patches. Wheel control can be a little obnoxious over bigger potholes in Sport but, for the most part, it’s very well judged. The steering is crisp enough without adding weight via the drive modes and the brakes, which feel overservoed at first, soon become second nature with an instant reassurance as long as you’re tuned into the pedal modulation.

About as big a compliment as it’s possible to pay the T-Roc is that it feels very much like a Golf to drive. The all-wheel drive system is largely indolent, reluctant to entrain the rear axle unless absolutely necessary. In other words, it never feels rear-driven per se, but the capability to send up to 50 percent of drive to the rears means that the threshold at which traction control intervenes on wet roads is that much higher, and the steering feels cleaner as a result. The engine has some genuine punch to it as well. Volkswagen claims 7.2 seconds to 100km/h for this 140kW version but it feels considerably quicker to me. Put it this way, if I were lined up at the lights next to the T-Roc in a Toyota 86, I don’t think I’d fancy my chances. With peak torque arriving between 1500 and 4800rpm, the 2.0-litre EA888 lump doesn’t require that many revs to get things ticking along either and the whole show’s done and dusted by 5500rpm, so don’t expect aural fireworks. Nevertheless, it’s a very impressive and flexible unit that just underscores what is a polished overall dynamic performance.

The T-Roc emerges as a likeable and fun crossover. The verve and composure in the way that it tackles a road may not be of value to some crossover buyers. We understand that. Should you prefer something that feels more luxurious and relaxed, Mazda has a vehicle called the CX-30 and should you require something bigger and cheaper, Kia has a Seltos waiting for you. These are both excellent choices. Where the T-Roc scores is in managing its compromises smartly. It’s wieldy and entertaining to drive, yet with the must-have adaptive dampers, can also be comfortable and relaxed. It feels pleasantly compact to thread down a road, but delivers decent practicality. It’s stylish without sacrificing utility at the altar of aesthetics.

In short, the Volkswagen T-Roc is a very good car, but it would be remiss of us not to note that it also feels what it is, namely a car that we first saw in 2016. So what took you so long? 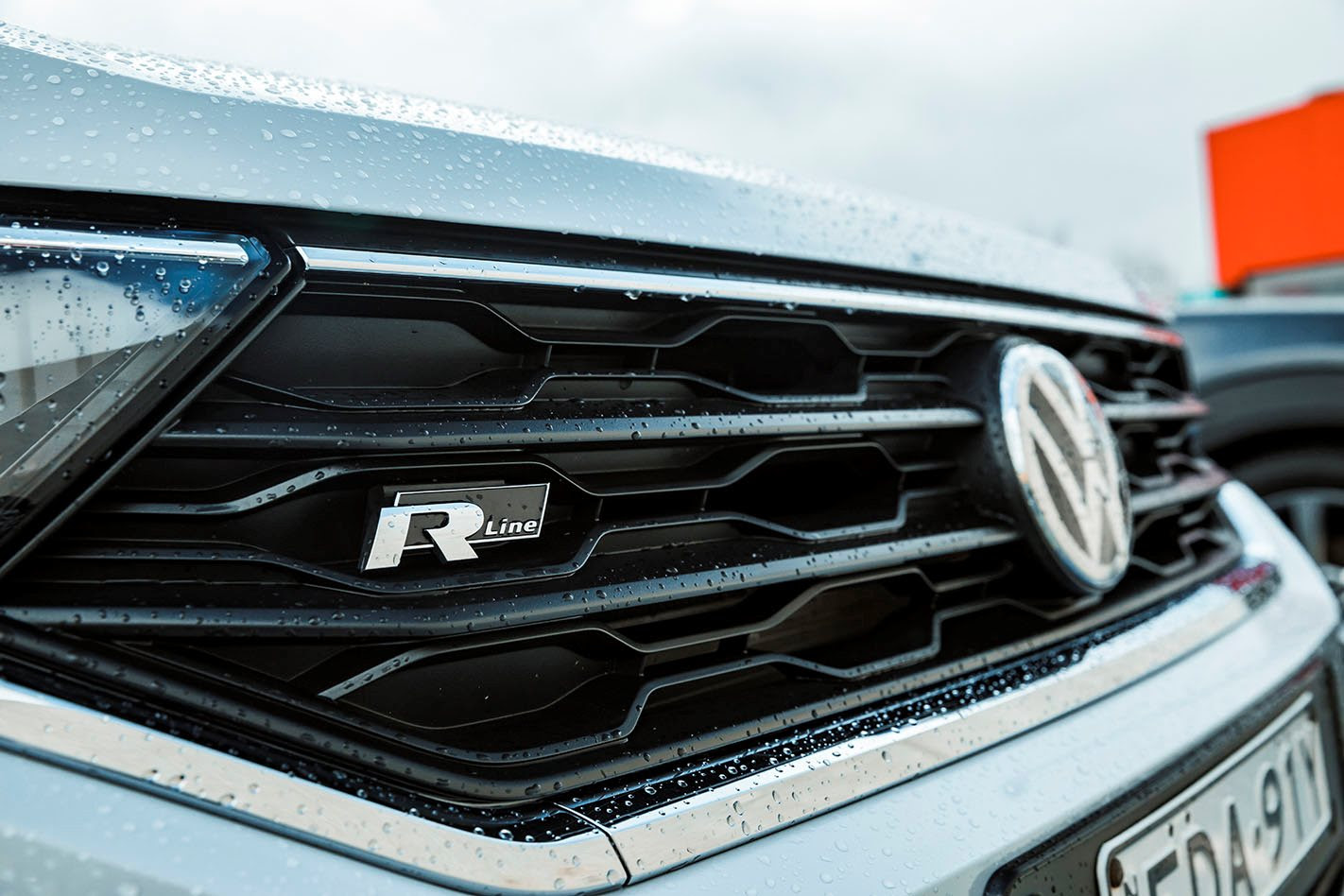