Revamped style, bigger boot, and upgraded safety for this genuine off-roader says….look at me now!

Cherokee is Jeep’s mid-size SUV. It sits above Renegade and Compass and below Grand Cherokee in the American brand’s SUV line-up. This is a refreshed version of the fifth-gen Cherokee that aims to right the styling wrongs of the polarising model launched here in 2014. Otherwise, it retains genuine off-road credibility and a V6 engine, which makes it unique in its class. This update is mostly about aesthetic improvement, but a number of unseen changes should make it more appealing to Aussie buyers who haven’t flocked to the Cherokee in massive numbers thus far, despite the popularity of the segment.

The success of this largely superficial update will be in the eye of the beholder, but ditching its weird squinty headlight design has certainly done good things for it. Additional safety equipment, a bigger boot and stable price-points are also positive. There are more economical and refined offerings in the segment, but the Cherokee has an endearing, knockabout quality, and there’s nothing quite like the flak-jacket-wearing Trailhawk for those who want adventure. THERE is only one mid-size SUV on sale with proper off-road chops: the Jeep Cherokee Trailhawk. No other vehicle in the segment is available with a low-range transfer case, and it’s that rut-riding, rock-climbing ability and its V6 engine that gives the rugged American a distinct point of difference.

Other Cherokee variants are equally at home on dirt, even without the Trailhawk’s hard-core hardware, but this generation has had a hard time finding favour with Aussies since its 2014 debut, a problem that Jeep admits came down to its looks. 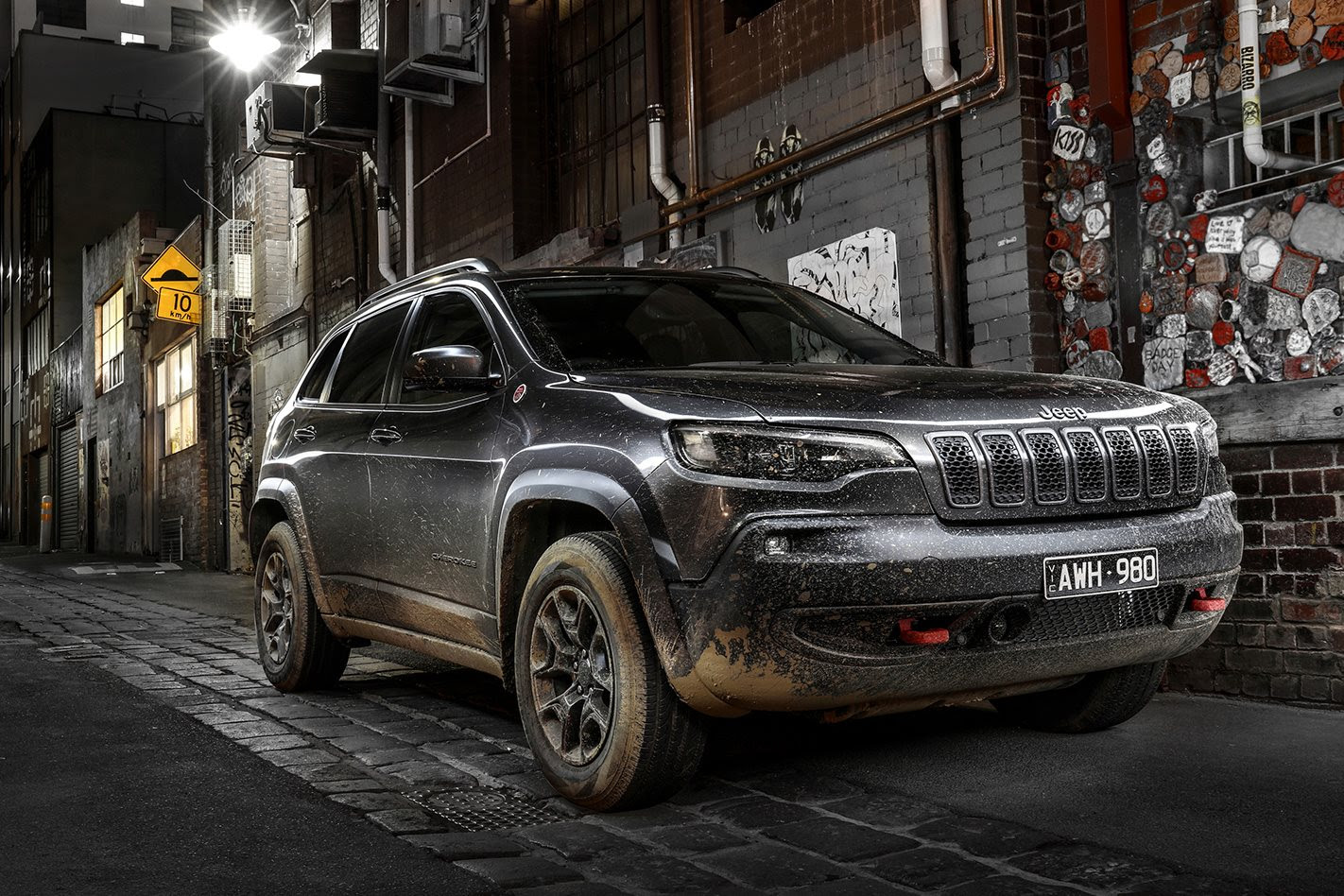 A midlife facelift for 2019 ditches the squinty double-decker headlight design for a more conventional look, and brings an equipment upgrade as well. All four variants in the local range are powered by carryover petrol engines rather than the 2.0-litre turbo four-cylinder introduced with this update overseas.

Cherokee Sport runs a 2.4-litre atmo four producing 130kW/229Nm sent to the front wheels only. Longitude, Limited and Trailhawk are all-wheel drive and use Jeep’s 200kW/315Nm 3.2-litre Pentastar V6, which is an energetic (and thirsty) performer with a likeably throaty soundtrack. All versions get a nine-speed auto, though only Trailhawk gets tricky off-road internals (lightened by 8kg), an extra electronic drive mode and a mechanically locking rear differential.

Jeep has tweaked the gearbox calibration of all Cherokees to improve shifting refinement, and it gave no cause for complaint at the launch other than some lag when using the new paddle shifters. Cabin refinement as a whole is impressive. Measures were taken to fix up NVH issues and it’s now noticeably quieter inside. 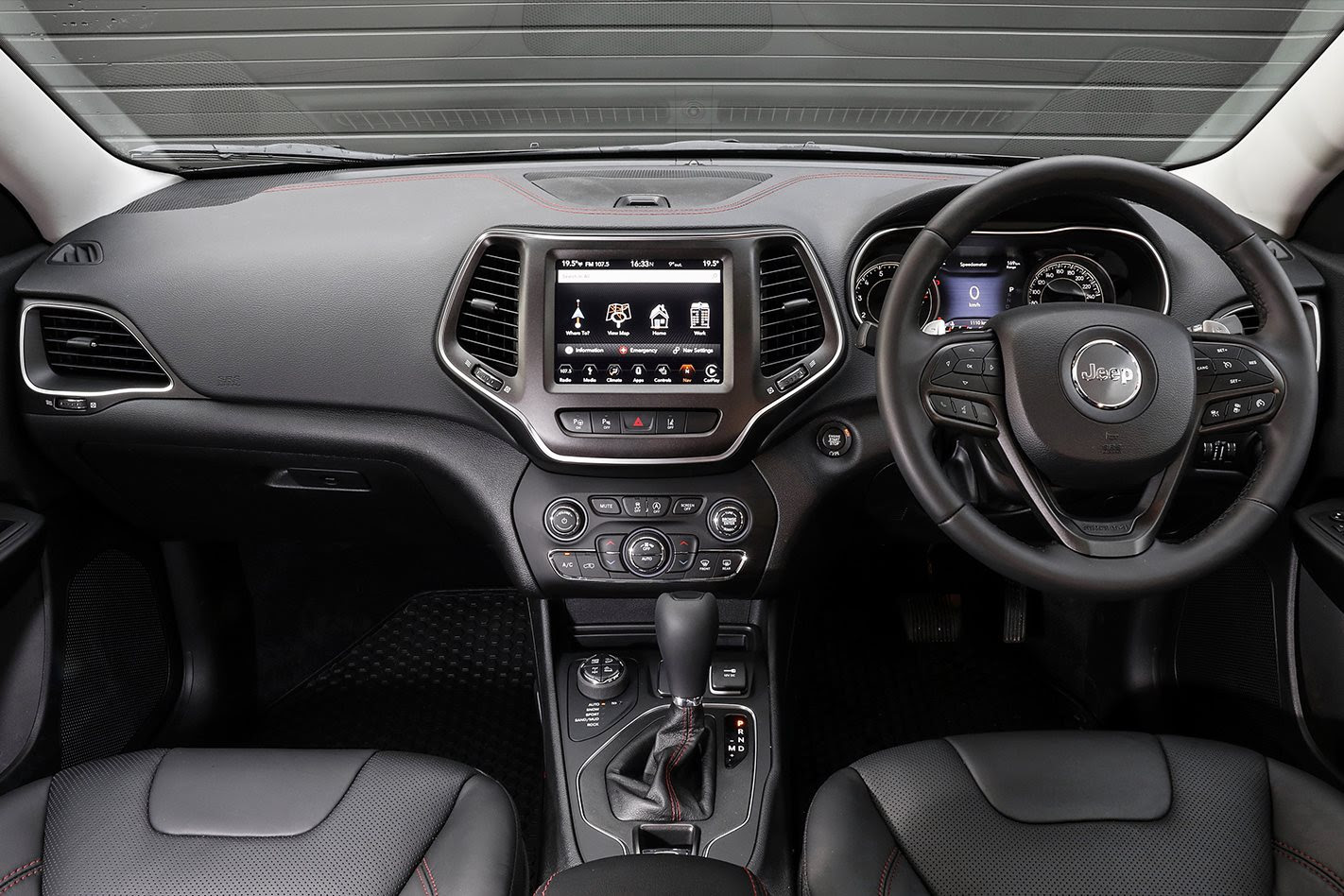 Dynamically, it’s still a little off the pace of class leaders. There’s a lot of head toss over lumps in the road from its tough suspension, and the light steering isn’t as accurate as a CX-5, but these compromises aren’t new and won’t seem so bad if you plan to make the most of its off-road aptitude.

The Trailhawk is a force on rough stuff. Heavy-duty mechanicals managed by sophisticated torque distribution systems give it surprising ability on difficult terrain. Selecting low-range makes quick work of steep, rocky tracks. Its tall ground clearance of 221mm is on par with most dual-cab utes, and there are protective plates underneath as standard. Options include more aggressive tyres (available at a dealer level) for those who are serious. Time will tell whether or not the styling changes are enough to lure the masses, though to my eyes the revised fasciae are an improvement. Boot space behind the sliding rear bench seat is 76mm wider thanks to revised trim on either side, still with a full-size spare under the floor in every variant.

At launch only the two range-toppers will be in showrooms, namely Limited and Trailhawk that sit on either side of a fork as the premium on-road option and robust off-road alternative, priced from $46,950 and $48,450 respectively. Sport and Longitude variants will fill out the lower end of the range early next year at $35,950 and $41,950.

All models take on additional equipment, including safety aids and Apple/Android smartphone integration, but it’s the Limited and Trailhawk that have the most to boast about including a full suite of active safety features, a large, responsive screen for Jeep’s Uconnect infotainment, and LED lighting front and rear. Jeep’s rugged reputation is backed up by Cherokee’s performance, and with its more mainstream appearance and an attractive five-year warranty and servicing plan, it should be much harder for prospective buyers to ignore.