Does this vehicle fit in my normal comfort zone?

FISH OUT OF water doesn’t quite cut it here. No, this is more deep-sea-tuna-on-top-of-Uluru kind of territory. Complete with Julian Assange-in-a-crowded-supermarket levels of discomfort.

You see, I’m just not a dual-cab ute kind of guy. I can appreciate them in a detached kind of way, and understand that they’re exceedingly popular and thus exceptionally relevant to the average Aussie, yet they hold zero appeal to my rational side. They’re too heavy, too thirsty and too clumsy. Plus I don’t have anything to lug about.

But here we go with a 2019 Ford Ranger Raptor Review 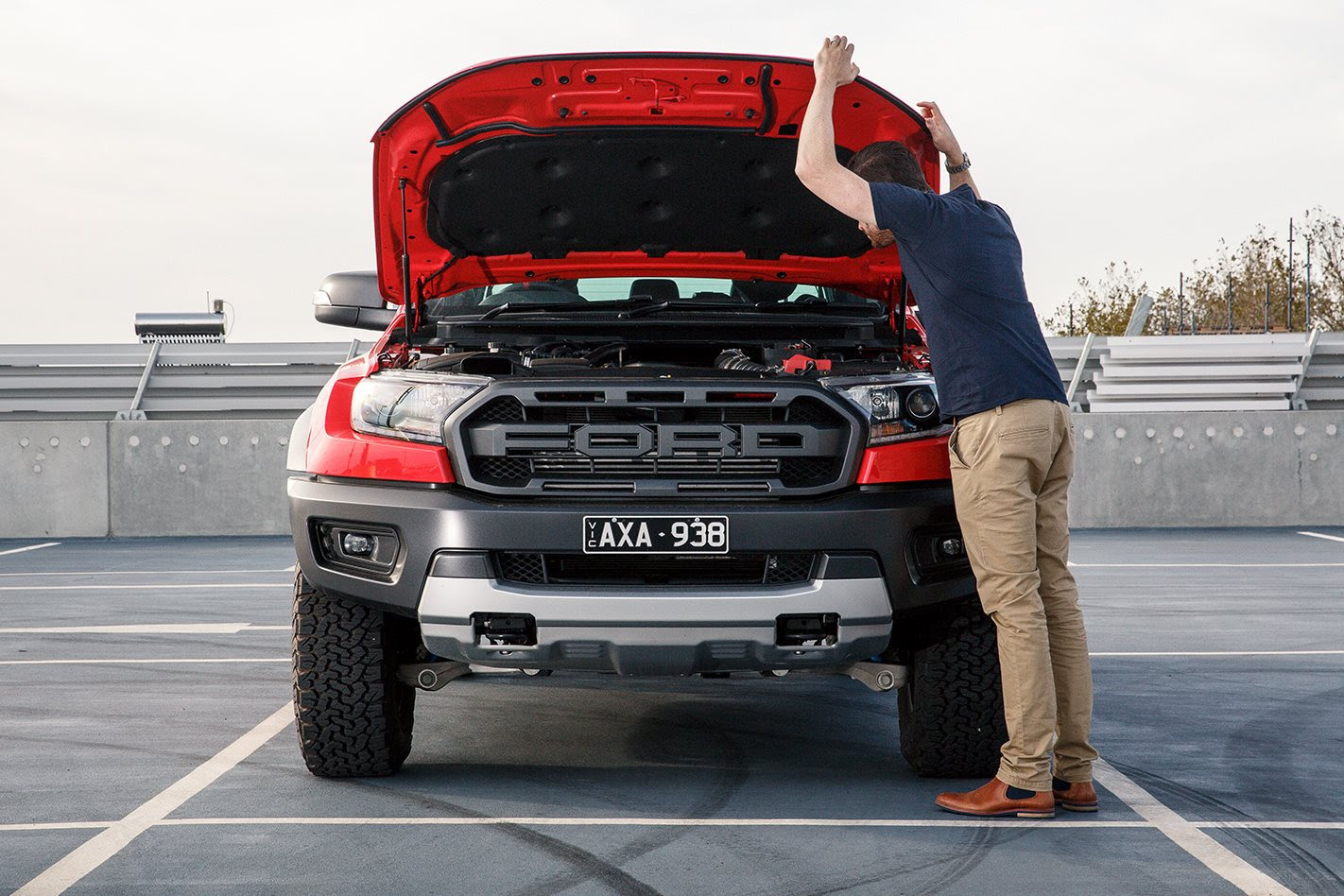 This does make me feel like an American trying to understand cricket, though I have tried to grasp the allure of the pick-up. This involved several attempts at hardcore off-roading, but all this managed to do was deepen my confusion. Who cares if your ute can clamber up a boulder? And enduring hours of muddy ruts and inching down slippery slopes at 4km/h is about as thrilling as hopping inside your dryer to share a spin cycle with a bowling ball.

All of this makes me the least qualified person in the Wheels office to run the latest addition to our fleet – this rather ostentatious Ford Ranger Raptor. Which is precisely why I wanted to be its custodian. Over the next six months, I’m hoping the Raptor can finally shed some light on the whole dual-cab thing. Plus, let’s be real: this isn’t your typical dual-cab. It looks absolutely mental, especially in this colour (a $650 option, while the decals are an additional $750), and I adore how much of a visual middle finger it delivers in every situation. Bluff, aggressive and imposingly tall (the track is 150mm wider and the ride height is 50mm taller than a regular Ranger), it’s the only vehicle I’ve ever ‘owned’ that requires the help of a grab-handle on the A-pillar to climb into.

Plus, while I find most off-roading to be about as exciting as a Matthew McConaughey marathon, the Raptor has been designed with a particular brand of bush bashing in mind – high-speed hooliganism. The evidence of this is found primarily in the one mechanical component that dominates the Raptor experience: the suspension.

The long-travel Fox shocks and strengthened chassis have been built to cop an absolute hammering as owners fang through deserts and jump off sand dunes with huge amounts of air. And that, dear reader, is the kind of off-roading I do find appealing. The hope is that during our time together, the Raptor and I will embark on some ambitious adventures that will expand my motoring horizon and skill set, but so far things have been fairly mundane. Month one has been spent acclimatising to its sheer size and girth (at 2180mm wide, lane discipline is important), enjoying the loftiness of its seating position (it rivals small trucks for height), and marvelling at how polished it is in heavy suburban driving. 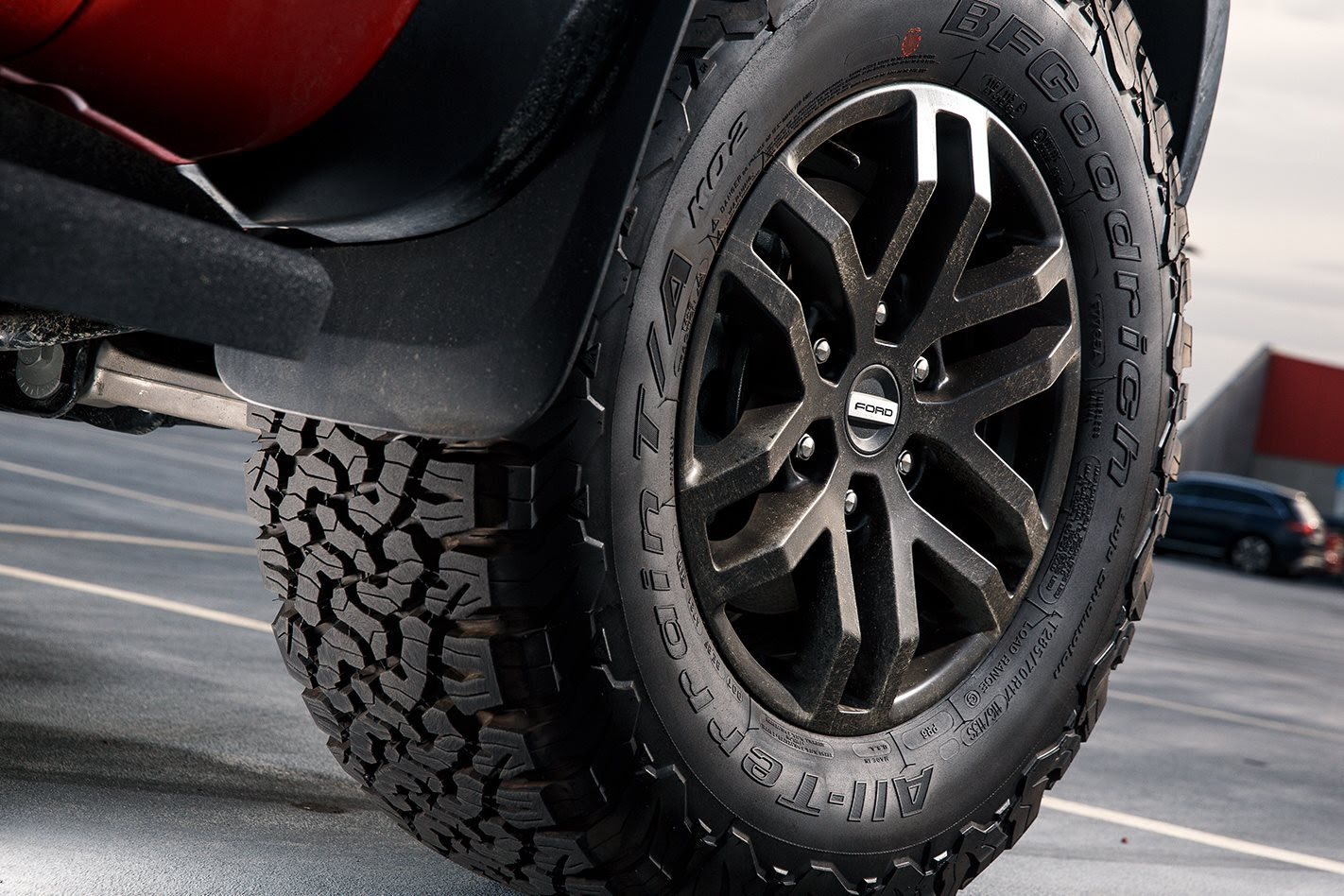 Sure, the controversial 157kW/500Nm four-cylinder diesel (more on this in coming months) is a little rattly at times, but the 10-speed auto is smooth and the cabin is remarkably civilised. Looking at those chunky 285/70R17 BF Goodrich tyres, I’d expected them to drone like a dementor’s death rattle at 100km/h, yet they’re no worse than a conventional passenger tyre. Impressive.

And in most situations, the ride verges on impervious. Small imperfections do make their way into the cabin with that trademark tremor that seems to plague all unladen pick-ups, but bigger bumps are ironed out with disdain. So much so, in fact, that speed humps don’t so much signal an obstacle that requires you to slow down as one that taunts you to speed up. The sternest test I’ve thrown the Raptor’s way to date has been a weekend jaunt to the Yarra Valley for lunch at a rather posh winery. It chewed up the four-hour road trip with ease – helped in part by comfortable and supportive Raptor-specific front seats – though it did score some odd looks as we parked up among the sea of grey BMWs, Audis and Volkswagens. It really did feel the odd one out. The proverbial fish out of water. And I liked that. 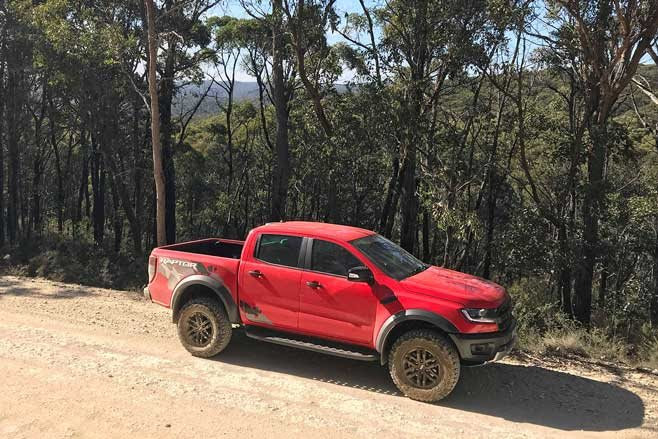 It is as I’d hoped. Five weeks into Raptor ownership and the Blue Oval brute is already enriching my life in new and dusty ways. Aware that I may have been a tad hasty in my remarks about off-roading in last month’s report (“About as exciting as a Matthew McConaughey marathon”), and with Saturday dawning bright, I decided the time was ripe for some adventuring.

With the wife equally keen to explore, we threw the dog into the back seat and made a beeline for Lerderderg State Park, an hour north-west of Melbourne with some 14,250 hectares of bushland on offer.

Its centrepiece is a 300m-high gorge that bisects the park, alongside which runs one of the main dirt arterials, O’Briens Road. It’s a well-maintained track that offers a tasty blend of wide and fast sections that give way to tight, plunging hairpins as the road snakes towards a river crossing. Perfect for exploring the six drive modes of the Raptor’s Terrain Management System, including the one I’m most keen to try: Baja mode. 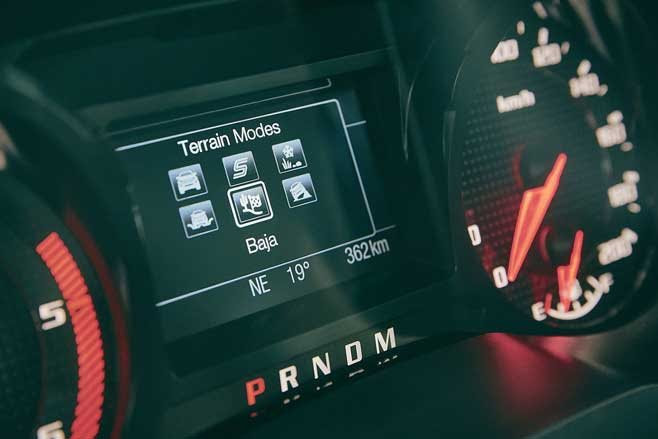 Each mode (Normal, Sport, Weather, Mud/Sand, Baja and Rock Crawl) alters the driver assist systems and the calibration of steering, throttle, transmission, ABS and the locking differential, though Baja is designed specifically for fast off-road running. It sharpens up shifts, holds onto gears for longer, improves throttle response and slackens off the traction control, all of which makes it an absolute hoot on a slippy surface.

Proper high-speed off-roading will have to wait for a safer location, so I only get a tantalising taste of what Baja has to offer – though Lerderderg does present a sterner challenge before we head for home. 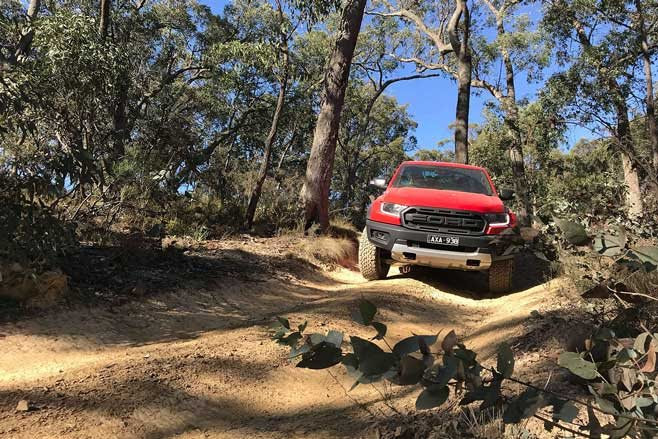 Splintering off the main road are numerous ancillary tracks that delve deeper into the dry bushland, quickly transforming into challenging trails with deep ruts, sharp rocks and steep elevation changes. Painfully aware of my inexperience off-road, and the fact that I haven’t seen another car for hours and have no phone service, I tread with caution. I needn’t have. The Raptor barely breaks a sweat as it clambers over fallen trees and crawls up hillsides with the surefootedness of a mountain goat.

The drive modes helped, as did the reassurance of the BF Goodriches’ reinforced sidewalls. But was it fun? Not in the way I’m used to when I’m at the wheel, though I’ll admit to a strange sense of satisfaction as we headed for home, the ute caked in dirt, and plans for a return visit already in our minds.