What is the Toyota HiLux SR5? 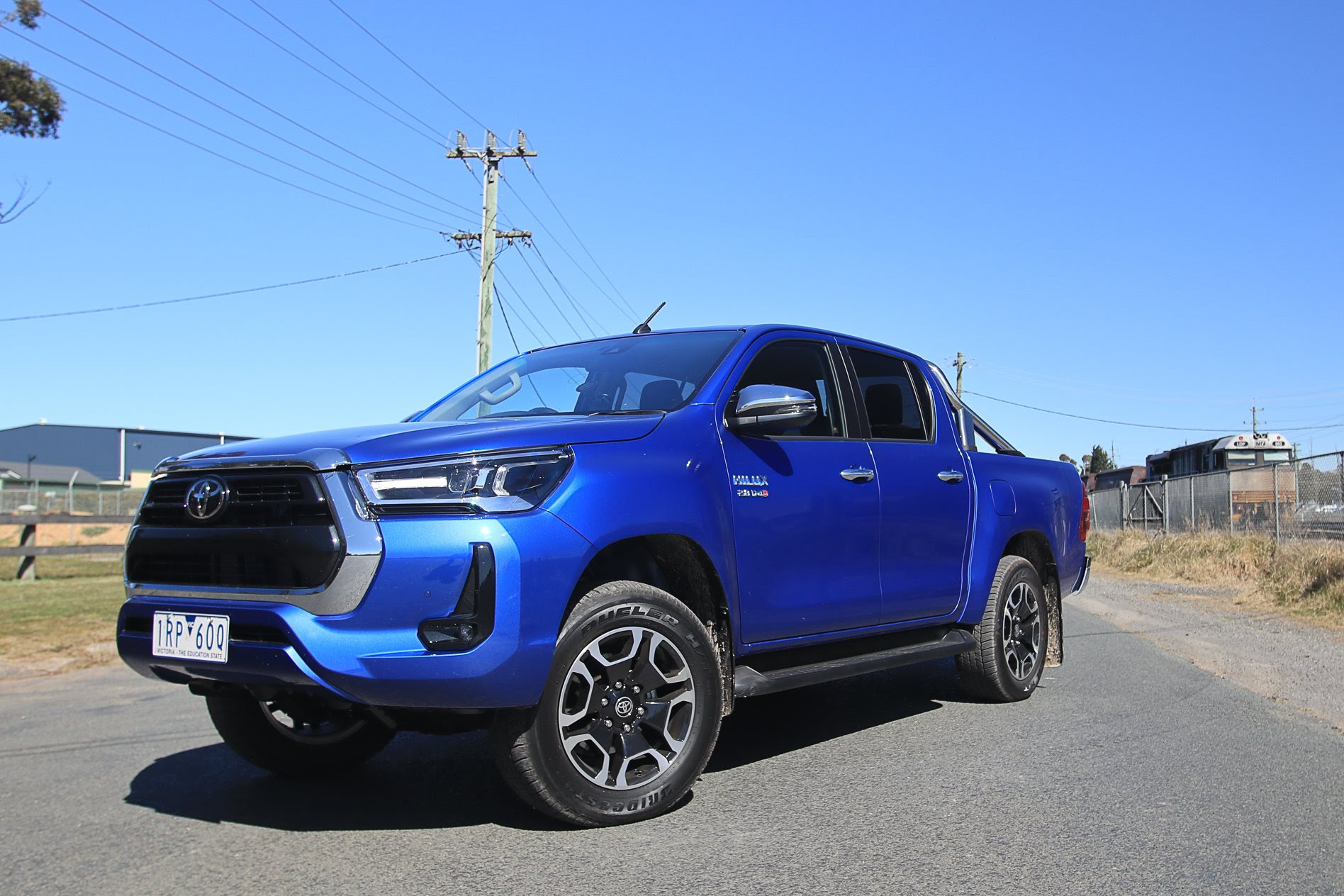 The Toyota HiLux is, by some odd twists of fate, one of Australia’s best-selling vehicles, despite the fact that it’s far from the perfect family vehicle. Built tough to endure mine sites and construction jobs, the HiLux’s most popular variant is the 4×4 dual-cab ute.

Formerly residing firmly at the top of the heap, the four-door, five-seat HiLux is now kept honest by the likes of the Ford Ranger, with upstarts like the Mitsubishi Triton and Isuzu D-MAX now nipping at its heels.

The eighth-generation HiLux launched in 2015 with new engines and technology, and the 2020 facelift addresses key areas like ride, handling and power output, where its rivals have been, one by one, stealing the march on the former king of the hill.

We put 750km on a new SR5+ in two days over a variety of terrain, even adding a heavy load to the tray for a brief test. How does the 2020 Toyota HiLux stack up? 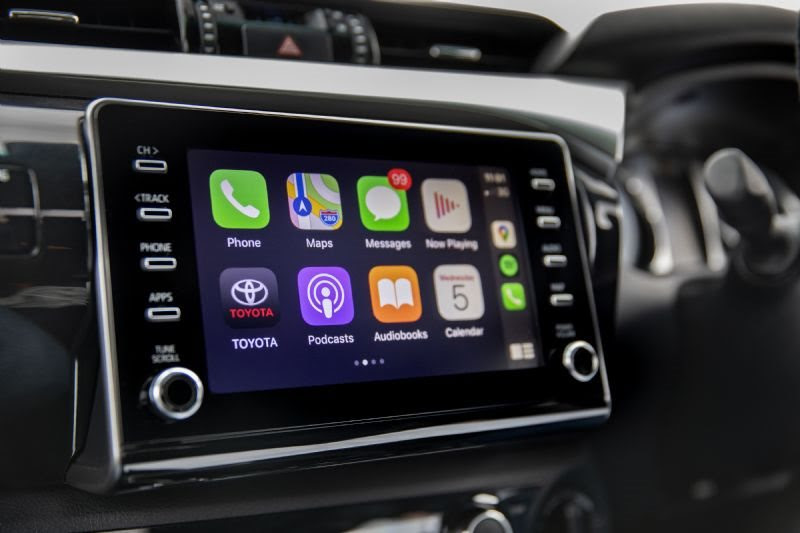 As pictured, the SR5+, equipped with a 2.8-litre four-cylinder turbo diesel and a six-speed automatic transmission, costs $62,420 plus on-road costs.

That’s a pretty sizable jump over the equivalent previous version of the HiLux; more than $9000 in real terms, in fact.

Dual-range 4×4 with hill descent control, adaptive cruise control, lane-keep assist, road sign ID and AEB with cyclist detection during the day, LED headlights and taillights, 17-inch alloys with highway-spec tyres, a new 8.0-inch multimedia system with Apple CarPlay and Android Auto and a small digital dash screen are standard, along with a 60/40 split base rear seat.

It does miss out on a few basics that would be reasonable to expect at this price point, including some sort of liner for the tray (be it spray-on or plastic) and vents and USB charging points for second-row passengers.

Does the Toyota HiLux have ISOFIX baby seat mounts? Sure does – two of them, in fact.

The SR5+ is two grand dearer than the SR5 by dint of its leather-faced heated seats (powered operation for the driver’s seat), and just over $10,000 dearer than the first 2.8-litre-powered double-cab, the SR.

Toyota is cagey about how it has addressed the diesel particulate filter issues that have plagued the HiLux, but it says that both “software and hardware changes” have been made in an effort to solve the DPF blockage issues that can quickly kill the expensive filter. 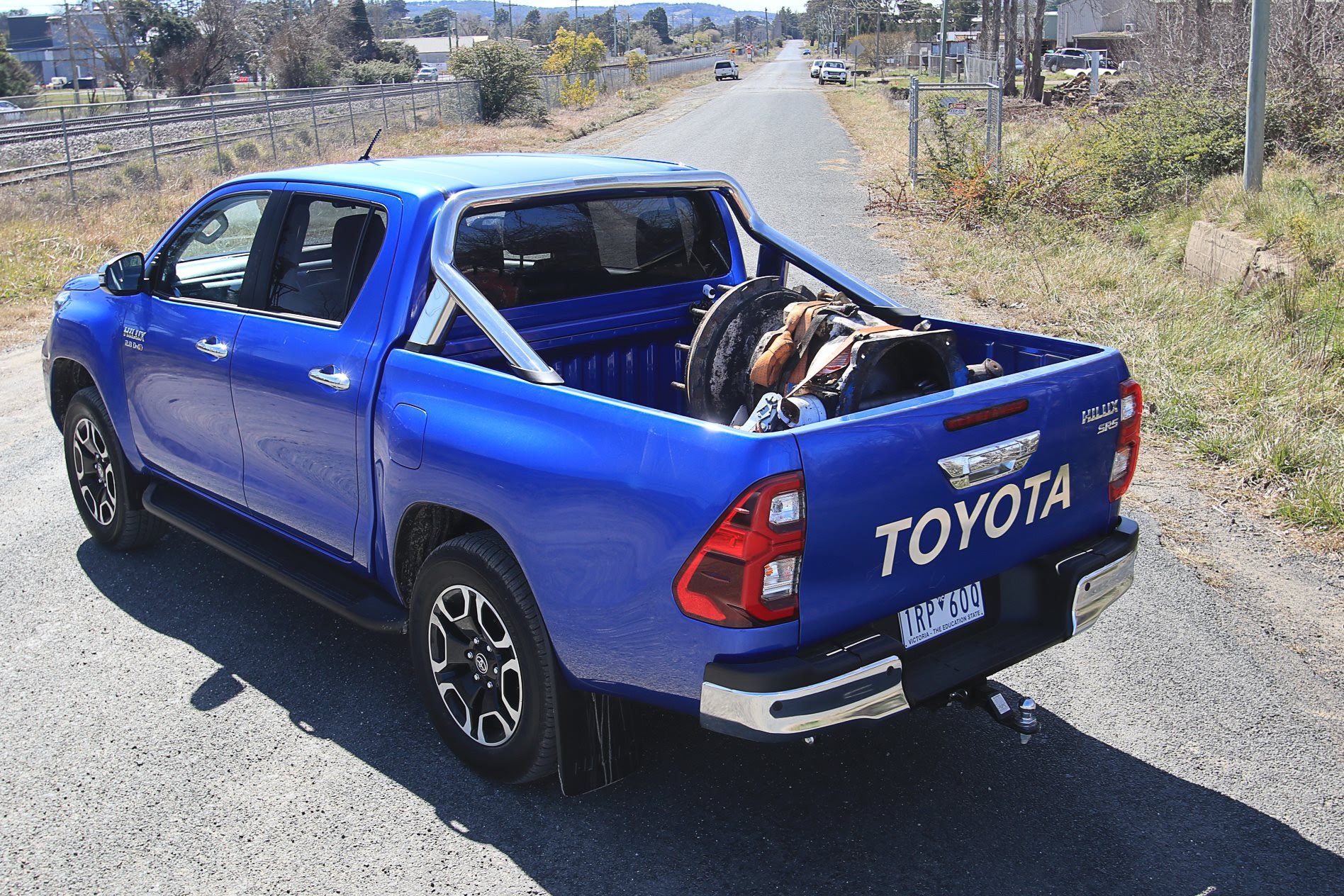 The biggest thing to mention about the updated Hilux’s design is the involvement of Toyota Australia’s Melbourne-based team. Charged with designing and implementing the changes for the HiLux worldwide, the Aussies built a full-size clay model of the car to send to Tokyo HQ, which signed off on the revised grille and front end, new headlight inserts and taillight arrays and other minor exterior touches.

You’ll have to know your HiLuxes to spot the changes; side by side the restructure of the grille and realignment of the lower bar is obvious… but Toyota saved its upgrade budget for bigger-ticket items to great effect.

Living with the Toyota HiLux SR5+ 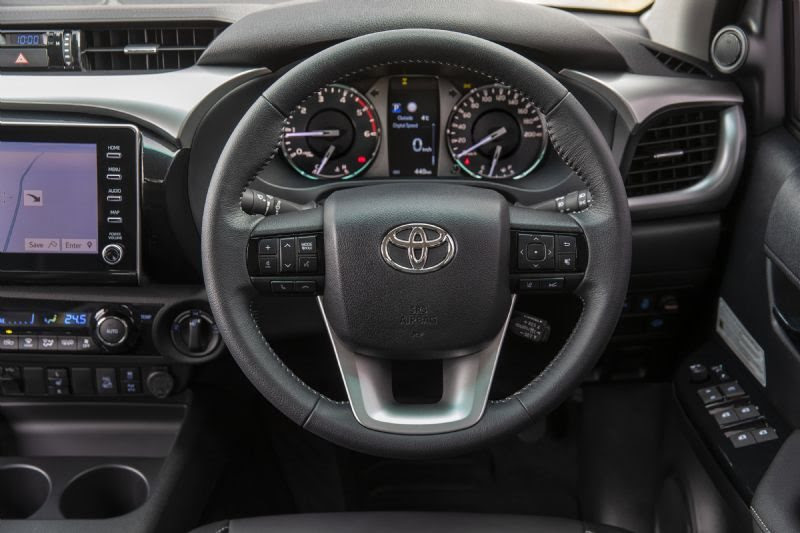 There hasn’t been much in the way of change when it comes to the interior of the HiLux. A new dash binnacle insert offers up redesigned speedo and tacho dials, but does include – hallelujah! – a digital speedometer for the first time in a HiLux. It also offers more data info for the driver, but not to the extent of things like engine oil pressure or temperature.

The other big change is the addition of a larger 8.0-inch screen to the centre console. The new system is compatible with Apple CarPlay and Android Auto, along with something known as myToyota. This will allow owners to use other apps like Stitcher and AccuWeather, some of which aren’t supported by either phone interface.

The screen can be used via capacitive touch, with larger icons making it an easy job. Each function can be accessed via buttons, and many owners will be pleased to hear that the volume knob has returned.

The seats are comfortable and supportive, and the steering wheel, while firm underhand, is comfortable over a longer journey. Rear seaters do sit quite vertically, but there is plenty of headroom, toe room and shoulder room.

A big tick for the flip-down hook on the back of the front seat to hang that plastic bag of pad thai and kung pow chicken from, too, Toyota.

Storage in the doors and in the centre console is adequate (just), but the rock-hard plastic that’s used to make the small trays and the two cupholders means that rattling is a real drama on rough stuff – we found ourselves stuffing napkins down the side of our regular metallic coffee cup for fear of going insane.

The tray of a dual-cab isn’t the best place to store stuff, and the HiLux is very bare-bones out back, with no power outlets, lights, or lining of any kind. The tailgate also lacks any form of soft-open mechanism, slamming down with a loud clank when unlatched.

We’ll talk about how it drives in a minute, but the changes to the suspension have also improved the quietness inside the cabin of the HiLux, too. Off-throttle, the engine quietens down nicely and aside from wind noise around the wing mirrors, the HiLux isn’t a chore to drive over longer distances. A six-speaker stereo system helps here, too – funny to write that about a HiLux! 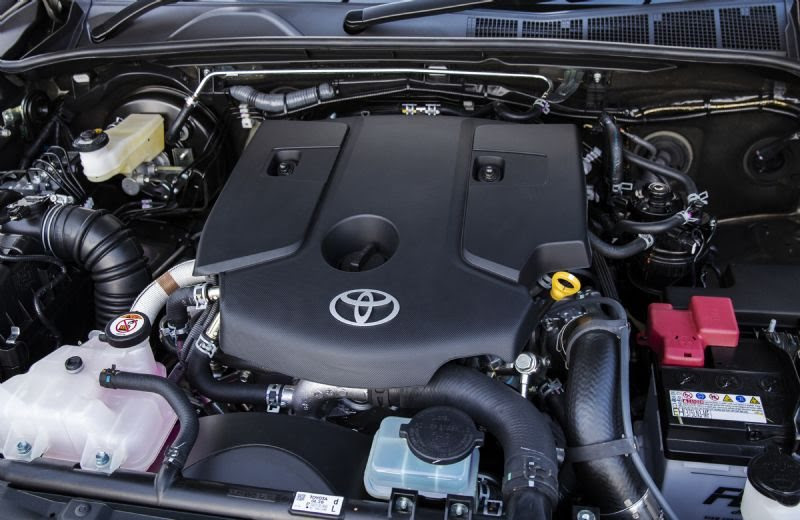 Under the bonnet of the HiLux, the 2.8-litre four-cylinder turbocharged diesel engine has been considerably overhauled.

A larger, ball-bearing-equipped turbocharger, a stiffer cylinder block, better exhaust gas management and improved cooling helping to boost outputs to 150kW (up 20kW) and 500Nm (up 50Nm) on the six-speed automatic version (though it’s still 420Nm for the six-speed manual version, despite what you might read elsewhere).

It’s still a handful of killer wasps down on the Ford Ranger‘s 2.0-litre twin-turbo’s 157kW, but the torque is now a match.

Another improvement; the updated six-speed auto can now handle 3500kg of braked trailer, up 400kg over the previous version. Toyota says it’s down to improved torque lock-up calibration.

The HiLux retains its dash dial-activated low-range 4×4 set-up, with the default drive mode being rear-wheel-drive. A hill control descent button and an old-school ‘idle-up’ button are the main electronic off-road aids. 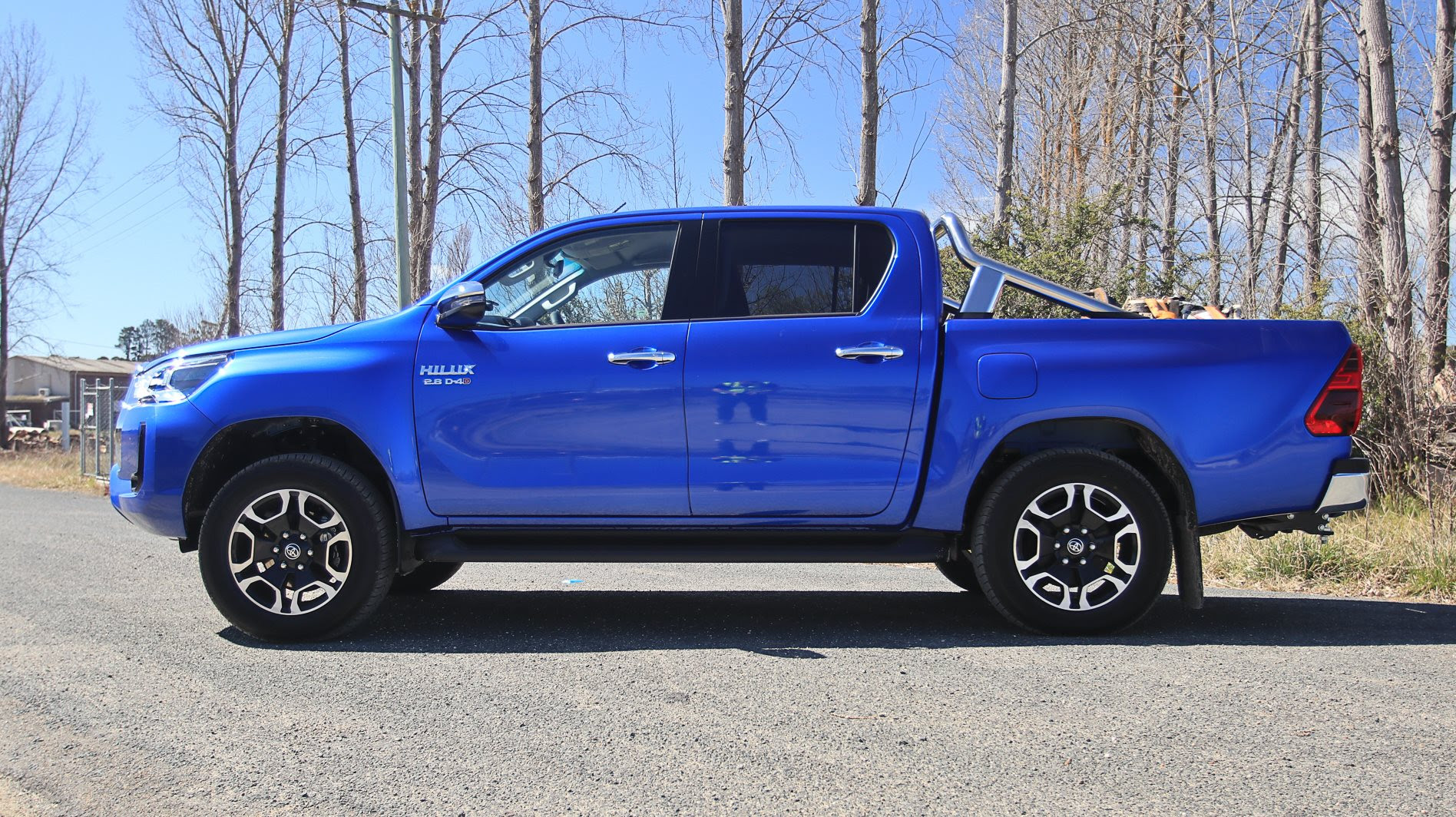 Toyota has worked hard to bring new updates to the HiLux. Chief amongst these are the changes to the suspension, which has been tweaked to improve the HiLux’s busy, buzzy unladen ride quality.

Revised low-friction (read: more expensive) shocks, revised bushings and new, longer and softer leaf springs work with updated bushes between the body and the ladder-frame chassis to give the HiLux a much more mature, controlled and generally nicer ride quality when it’s not carrying anything in the tray.

All changes have been made in simpatico, resulting in a HiLux that feels more grown-up.

Steering feel, too, has been improved. Toyota has kept the older-style hydraulic steering assistance for the HiLux because it claims it’s more reliable off-road. A variable ratio pump has been added to the system, which works harder at low speed to lighten the steering effort, conversely firming it at higher road speeds.

Overall, the HiLux ute is now quieter, much more compliant over small bumps and breaks in the road and it generally feels much more refined – and it needed to, given the quality of its opposition in this area.

We also briefly tested the HiLux’s ability to carry a load with the new suspension setting by adding a 650kg wheel unit from a mining shuttle car to the tray. The tray itself can’t carry a standard 1200mm wide pallet, though. 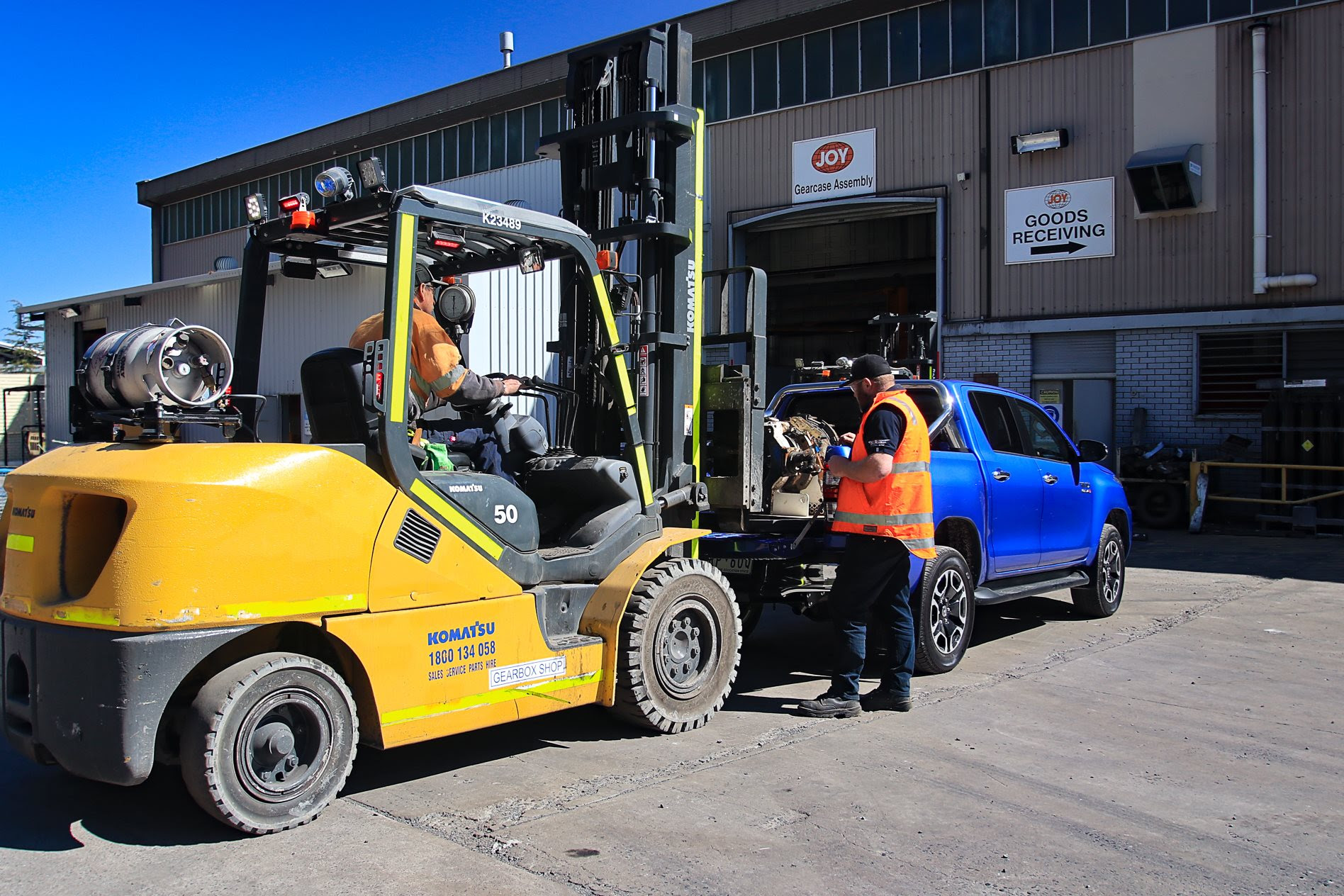 The HiLux can carry up to 1000kg of payload (which, don’t forget, includes driver, passenger and anything packed in the cabin, not just what you chuck in the back). In our case, total payload measured about 770kg, including the 650kg wheel unit and frame, the 110kg driver and 10kg of camera gear.

The revised rear suspension visibly sagged under the load, which was located a little too far towards the rear of the tray over the axle. However, it worked well over corrugated roads and railway crossings and steered perfectly well, though braking performance was definitely compromised, with longer stopping distances and a softer brake pedal underfoot.

As mentioned, the towing capacity of the HiLux is now higher for 4×4 automatic models, with all 4x4s able to tow 3500kg of braked trailer.

How safe is the Toyota HiLux SR5+?

There’s no change to the HiLux’s five-star ANCAP safety rating, which was a major goal during the development of the eighth-gen ute. Five-star cars are far easier to sell to large mining and construction outfits.

However, the active safety equipment level of the HiLux (including high-speed AEB with daytime cyclist detection, trailer sway control, lane-keep assist and adaptive cruise control) is being challenged by rivals like the new Isuzu D-MAX, which also offers rear cross-traffic detection and blind-spot warning.

How much does it cost to run the Toyota HiLux SR5?

Servicing intervals of six months or 10,000km are shorter than those on key rivals like the Ranger (15,000km/12 months) and are, consequently, more expensive when it comes to fixed-price service plans.

A capped-price service plan over five years will cost $3537, with the first four services capped at $250 each. The warranty for the HiLux extends to five years, but because it’s deemed a commercial vehicle, kilometres are limited to 160,000km.

At a claimed combined fuel economy figure of 7.0 litres/100km, the Toyota HiLux’s 80-litre fuel tank allows a theoretical range of 1150km on one tank of diesel. Over 750km of testing, we burned 9.4L/100km over city and highway. The HiLux is an important car for Toyota, but the brand has long been guilty of doing exactly enough to maintain its advantage and not a skerrick more.

Now, though, the competition is stepping up its game, and Toyota has responded with a meaningful update to its powertrain and suspension. Can it keep its number one spot? Only time will tell.

Comfort and practicality (all seat positions, cargo space, ease of use) 8/10

On the road (engine/drivetrain, ride and handling) 8/10

Much more comfortable, smoother and calmer to drive

Expensive, loses out on spec to key rivals