The new Kia Sorento is worthy of consideration

This Korean is on the money

The Wheels Verdict: Nailed it! A hugely persuasive large SUV thanks to the ease and completeness with which it fulfils its intended function. More than that, though, new Sorento imparts a feel-good factor thanks to the use of quality materials and cool design; higher pricing feels reasonable given what it delivers.

WHAT IS THE KIA SORENTO ?

The fourth generation of Kia’s flagship large SUV with seating for seven, offered in a choice of four specification levels, and powered by either a petrol V6 or turbo-diesel four.

This a hugely significant model for Kia, introducing a new platform, previously unseen levels of comfort, convenience and safety technology, all packaged with an upmarket aesthetic (in top-spec GT Line) that will have rivals worried. 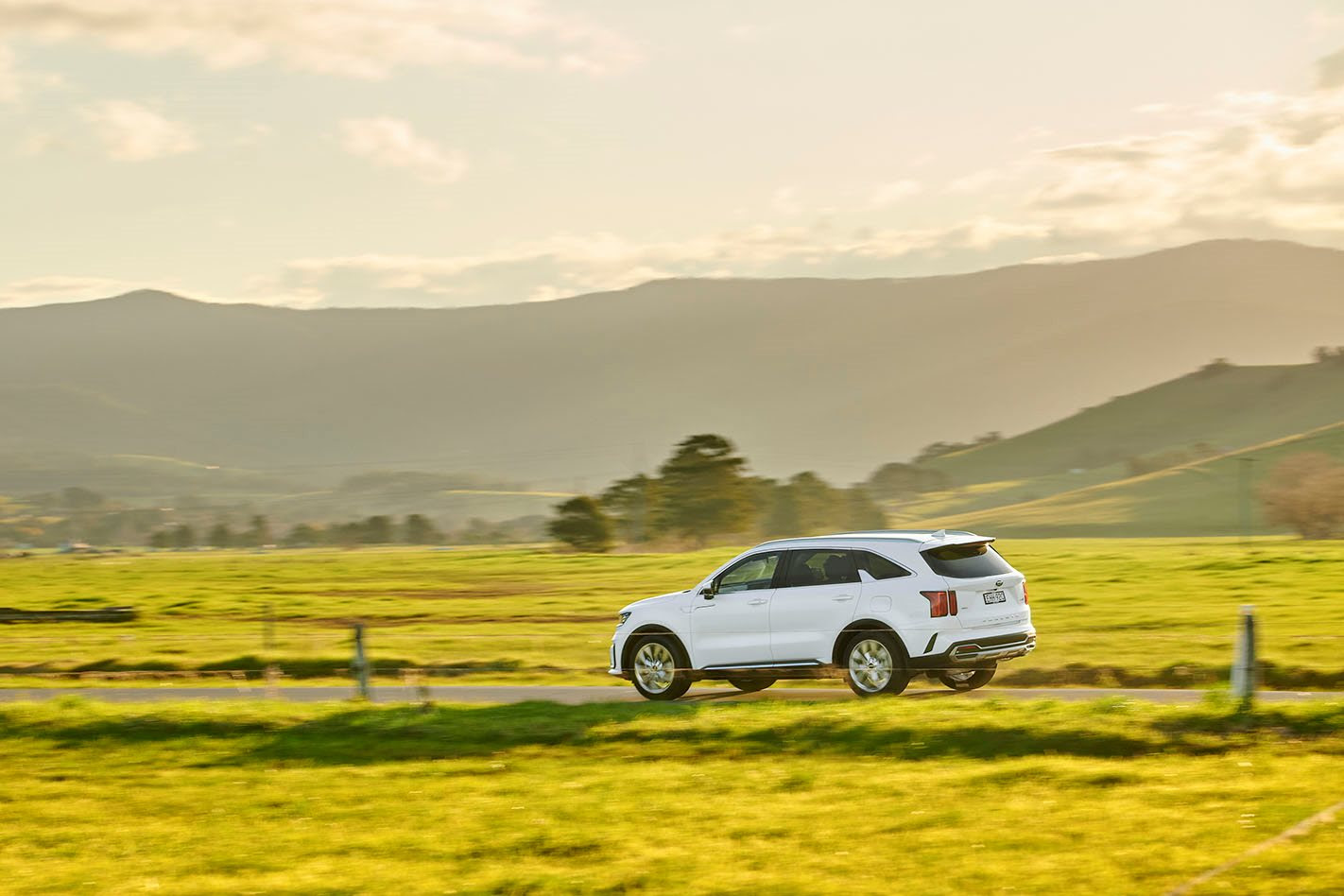 If the Stinger sports sedan launched 2017 was a pivotal car for Kia, then this, the all-new fourth-generation Sorento, is a true landmark for the Koreans. From its chiselled, masculine exterior design, to the premium, tech-driven feel of the cabin, this is an SUV that instantly feels like the beginning of a new chapter.

Our drive was of the top-spec GT Line, crowning an eight-strong range and  powering all four wheels via a new iteration of the company’s 2.2-litre diesel hooked to a new eight-speed dual-clutch transmission, so that will be the focus here. But the four spec levels are also offered with a 3.5-litre petrol V6 (200kW/332Nm) driving the front wheels. The petrol variants arrive in a month or so, with the base petrol S model yours for $46,990 drive-away (diesel with AWD adds $3000 regardless of spec).

Instantly, new Sorento feels spacious, upmarket, and intelligently designed, with evidence of comfort and convenience equipment everywhere you look. Admire the crisp resolution and cool graphics of the big 10.25-in touch screen; the way it seamlessly merges with the 12.3-inch digital instruments; count the USB ports (seven, across all three rows), sniff the aroma of the quilted Napa leather seats. Annoy your partner by reclining them in their seat by using the secondary controls located on the inboard side bolster.  And if you’ve parked it in a tight space hindering door opening, just extract it with the driverless ‘remote park assist’ function while standing outside using the key fob.

Fire it up, and about the only negative I can find presents itself. Despite the significant extra measures to cut NVH, the diesel engine (now 19kg lighter than the previous version thanks to aluminium construction, rather than cast iron) delivers a tiny, faint tremor though the wheel and pedals. Maybe it’s so slight it’s only noticeable to paid-to-be-picky jounos.  On the move, the hint of vibe and faint clatter disappears and a strong, lag-free well of torque is there to access, making the big rig feel eager and lively. The available powerband spans from under 1500rpm to over 4000, which is actually ample, even for spirited driving. As for the transmission, the highest compliment I can offer is that I didn’t pick it as a dual-clutch in low-speed manoeuvring, instead just super impressed by its crisp, intelligent calibration on the move. Comfort sees it respond instantly to a light foot, using the torque to shuffle quickly up the ratio set. Switched to sport, it doesn’t hold a cog unnecessarily, instead just grabbing gears up or down with near perfect intuition. Sport also adds weight to the steering, without it feeling gloopily unnatural. 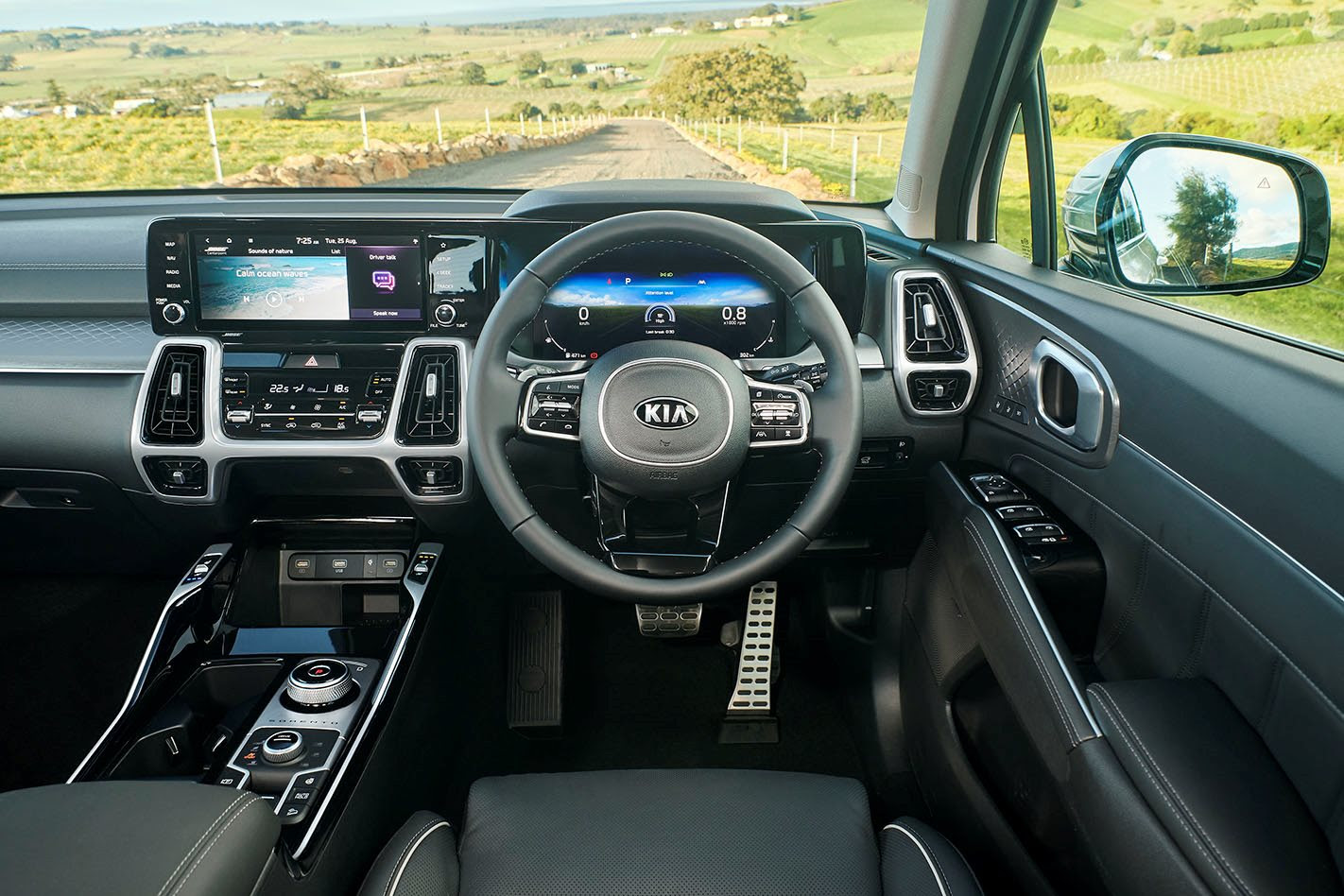 Ah, the steering. It’s a responsive, 2.5-turns lock-to-lock helm connecting you to an all-new platform, known as N3. Sorento is the first model to use it, and instantly, you know it’s a good ’un. The wheelbase is 35mm longer than the outgoing Sorento, and while the fundamental layout carries over – struts up front, multilinks at the rear – there’s been significant improvements to both stiffness and NVH-reducing isolation, along with new, more sophisticated (passive) dampers from ZF Sachs. Weave in the local tuning work, and even on the 20s of this flagship (wheels run from 17 to 20s across the four grades) it all gels superbly. There’s palpable composure and confidence in the way it tackles bumps and turns into bends, again marking a new high for a chassis tune from Kia. Bigger brakes, too, even though they’re tasked with hauling down slightly less weight, due to great use of lighter ultra-high-strength steel.

As for space and comfort for those in the second and third rows, again, a great execution. Second-row seats are able to slide 45mm further, creating the option for more legroom, and providing a wider point of entry to the third row. In terms of ventilation, storage and connectivity access for passengers, it’s all hard to fault. 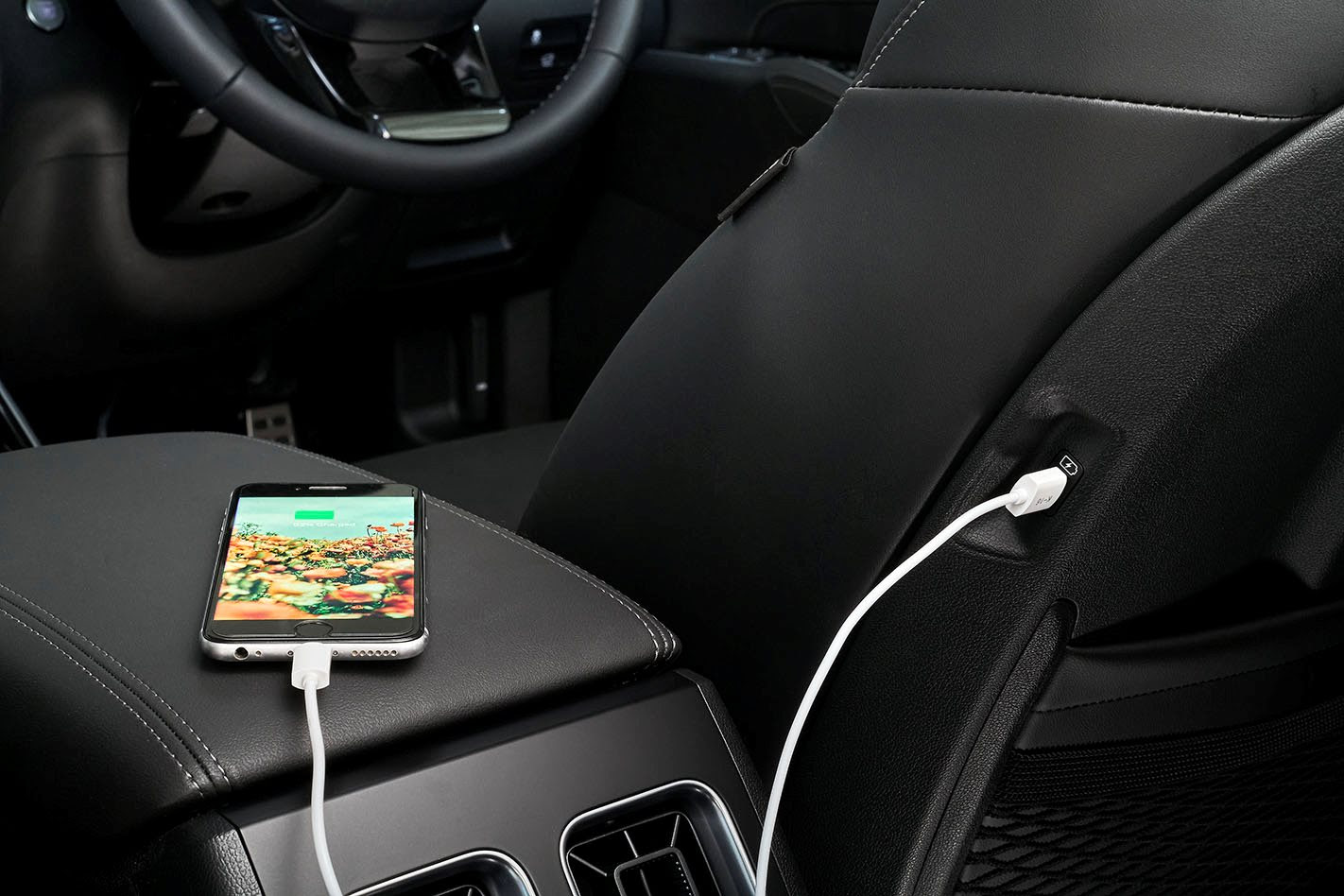 But surely it can’t be all sweetness and light? Okay, well prices are up across the range, but not astronomically, and the extra $2800 this flagship charges over its predecessor (now $64,990 driveaway) seems entirely reasonable given the overall polish and the fact it’s loaded with more fruit than a barrow at Spain’s La Tomatina festival.

Yep, for the reigning benchmark in this segment, our 2017 COTY-winning Mazda CX-9, life suddenly just got a whole lot harder. 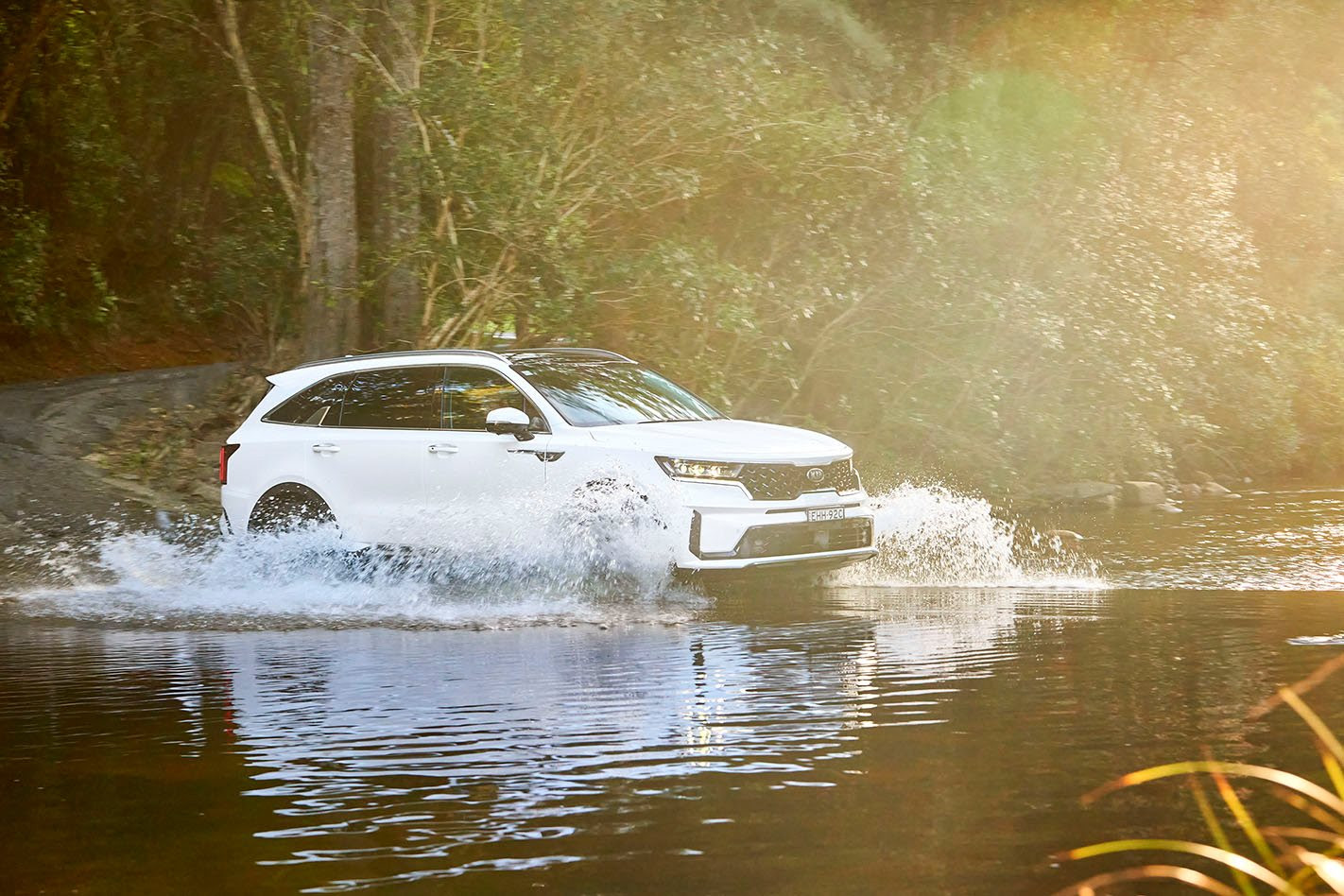 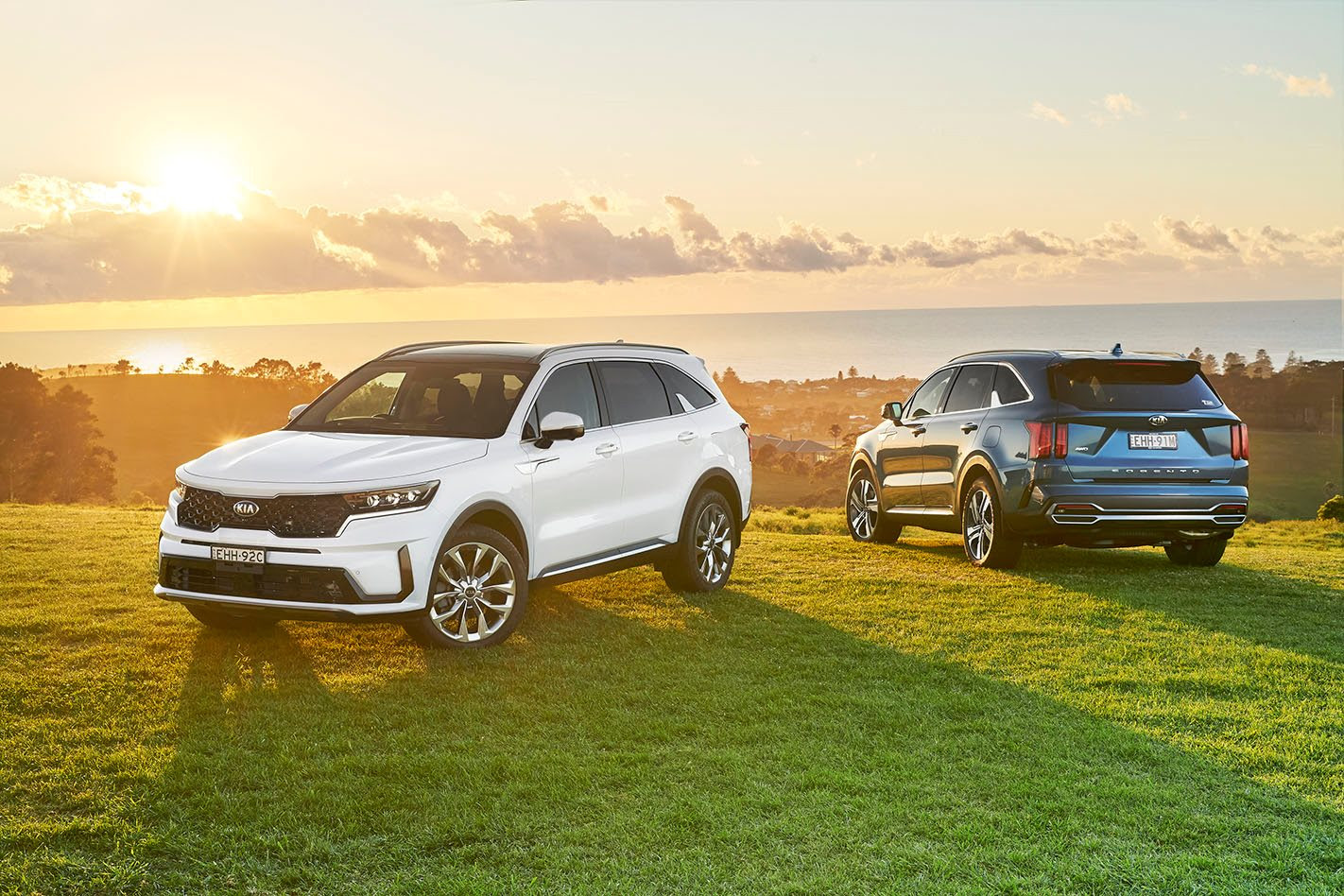