Here we go – a muscular Audi and the open road….

There’s no lairy wing at the back nor are the guards pumped to accommodate aggressively wide wheels and tyres, but then again Audi’s S-badged models have traditionally concealed their muscle so well you could argue the badge should stand for ‘Sleeper’ rather than ‘Sport’.

So that’s how it is for the all-new fifth-generation S6 that again sets up a game of ‘spot-the-difference’ between it and the more junior A6 55TFSI, which asks for $33,900 less. With the same shell and identical front and rear bumper structures, you only have 21-inch wheels (versus 19-inch), blacked out trim elements, king-sized red brake calipers and four oval exhaust tips to size up this baby limo at first glance.

This absence of visual flair has previously made the S6’s concealed muscle more exciting to discover. And initial specs suggest it carries a big stick, with 331kW/600Nm trumping the previous version’s outputs by 22kW/50Nm.

But not all things are as they were. Rather than harness a watered down version of an RS6 engine, this S6 is the first after three generations to use a different core donk to its big bro. It’s flicked the 4.0-litre twin-turbo V8 and its seven-speed dual-clutch. Instead its nose harbours the downsized RS4 and RS5 twin-turbo 2.9-litre V6 matched with an eight-speed automatic.

There’s also electric supercharging to help us warm to the idea of a downsized V6 where the car’s existing 48-volt battery architecture drives an extra compressor wheel, just like the SQ7 diesel V8’s system. 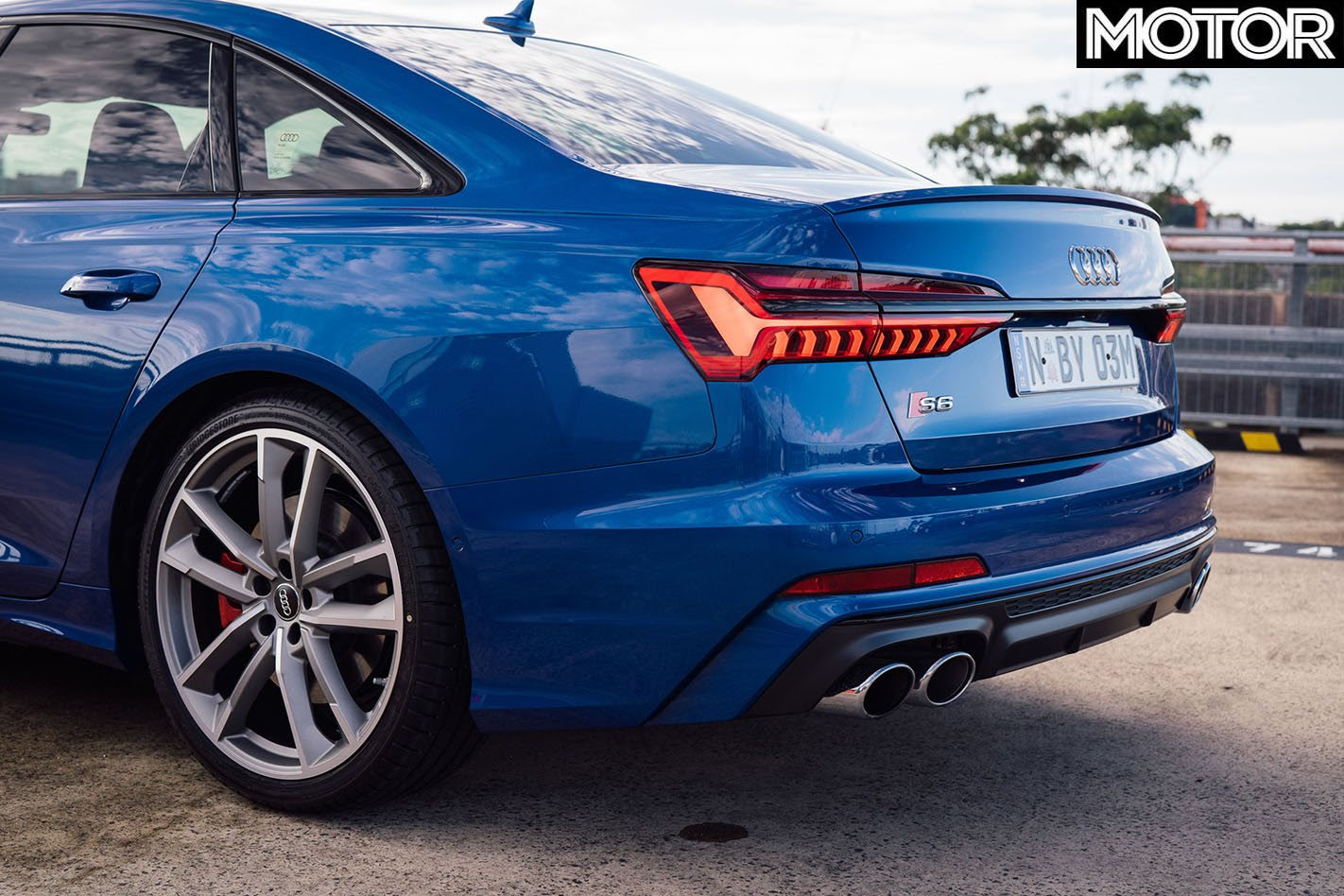 Although there’s no sign of it when you lift the bonnet, the e-supercharger sits downstream from the throttle body so it can charge intake air when the turbos are slow to spool. It does not change peak power figures, but gives this slightly-heavier S6 a hurry-up off the line instead.

The technical data report says it should hit 100km/h from rest in 4.5sec. Yet, as soon as we launch off the start blocks at Heathcote Raceway you know that’s bullocks as the S6 pinches you against its quilted leather seat. 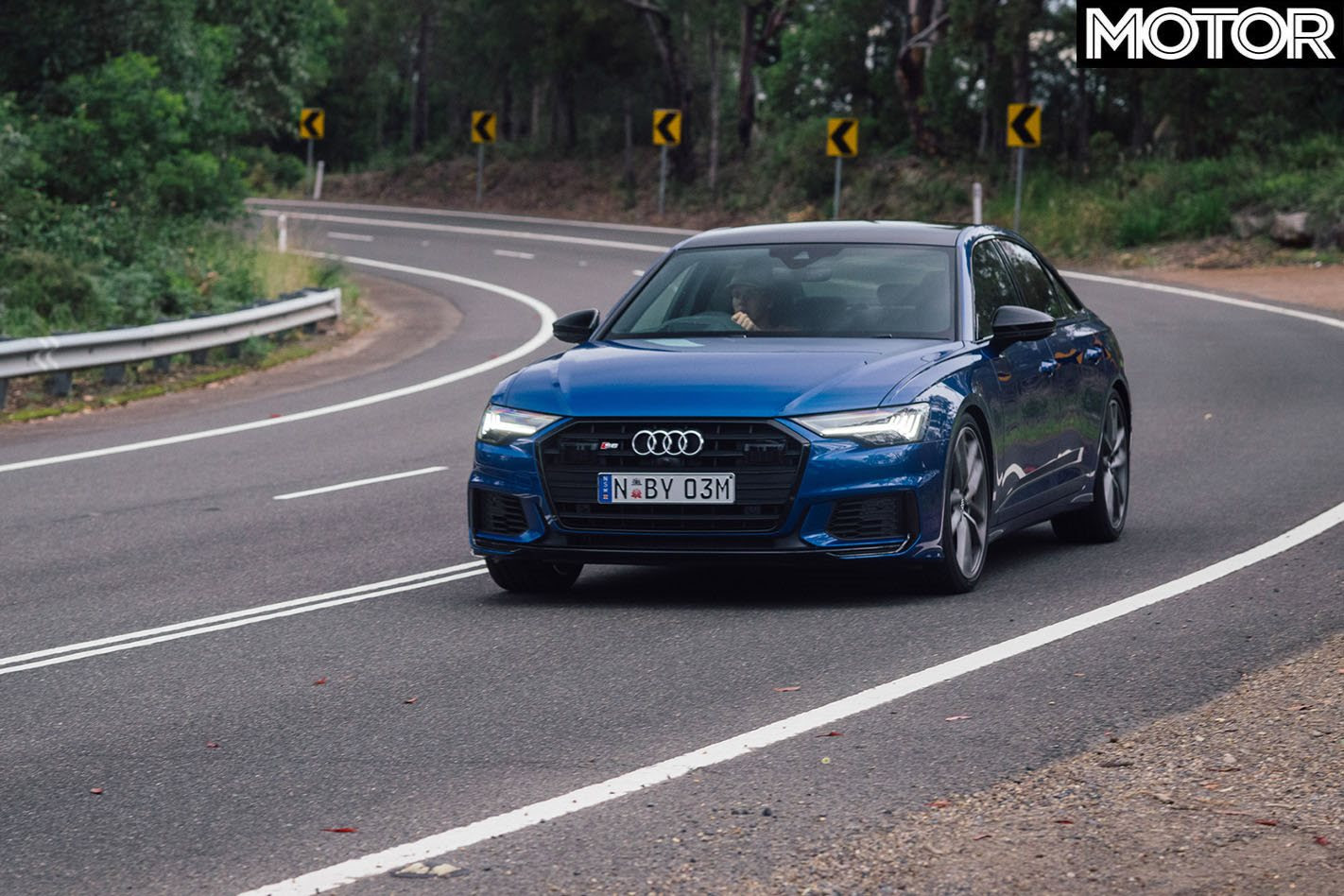 Despite this pace, it’s surprising given how the S6 labours to generate momentum over the first 100 metres or so. It’s only once you’re above 100km/h, and the 2.9-litre’s winding out in third gear, that the S6 really feels like it’s lifted its skirt and strides forward with pace worthy of the Autobahn’s fast lane. And the times prove it.

This near two-tonne sedan will stay with a Toyota Supra from 80-120km/h (which takes 2.66sec) and it’s carrying 183.84km/h across the 400m line after 12.47sec. That’s quick enough to hurry up last-generation hyper-hatches like the AMG A45 or RS3 if you ever find them on a long straight road.

As for stopping, the Audi hauls from 100km/h in 34.67m, or shorter than some hot hatches thanks to huge 400mm front discs and six-pot calipers. 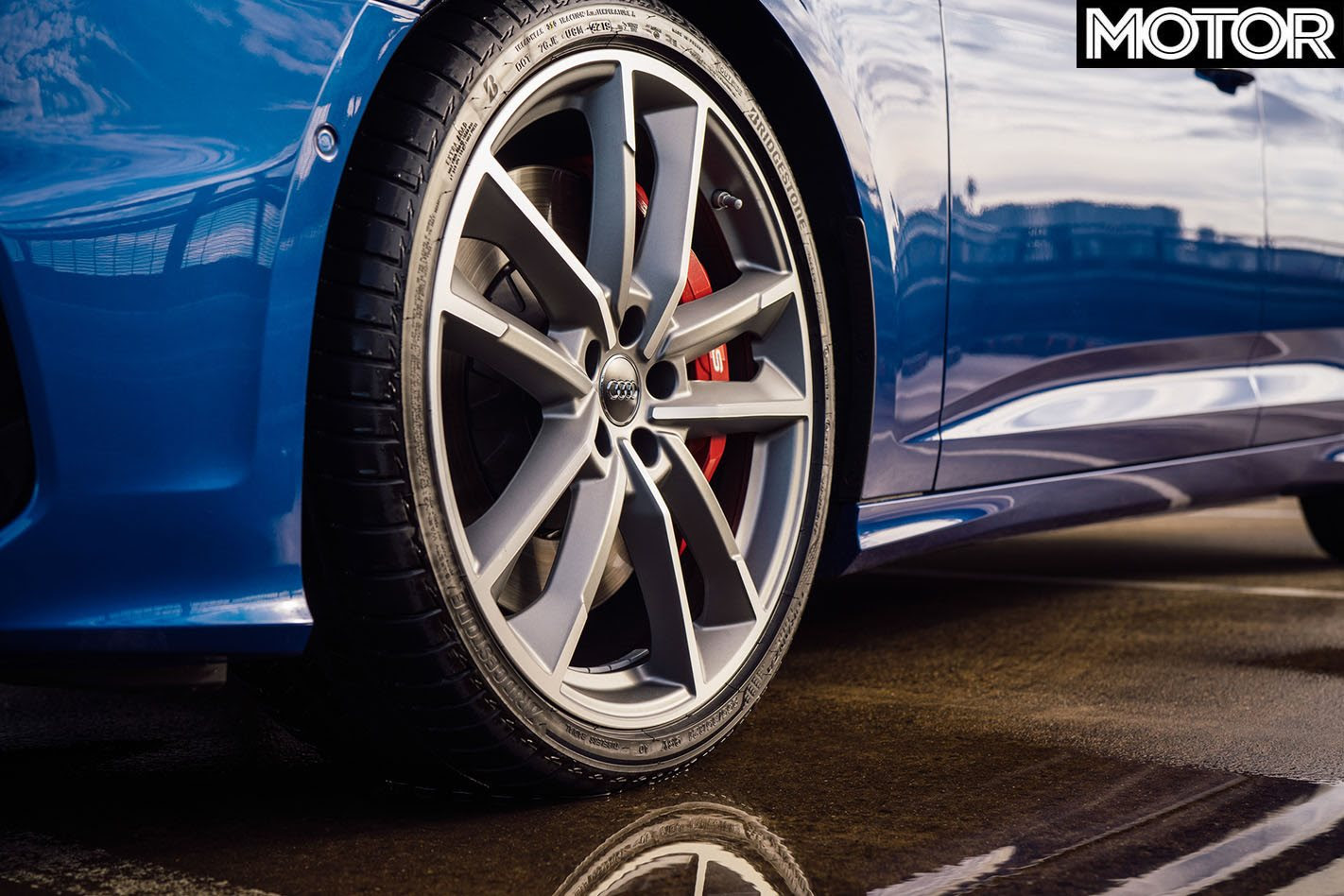 However, while its braking and acceleration suggest a high degree of agility there’s no denying the Audi S6 is a heavy car. Audi’s worked hard to minimise the weight increase over the old version, keeping that to just 15kg with an exotic-metal infused MLB Evo platform that cancels out extra weight from the battery.

Yet there’s no saving its ride-height adjustable air-suspension from two tonnes. For the most part it does what it should and delivers excellent ride comfort, smoothing out wavy roads with proper long-stroke cushioning while keeping the car’s trajectory solid and straight at speeds above 140km/h.

Lateral loads are what really challenge it, though. The humble grip on 255mm-wide Pirellis expose a lack of roll stiffness in both fast sweepers and hairpins, even when it’s hunkered down an extra 10mm in Dynamic mode. 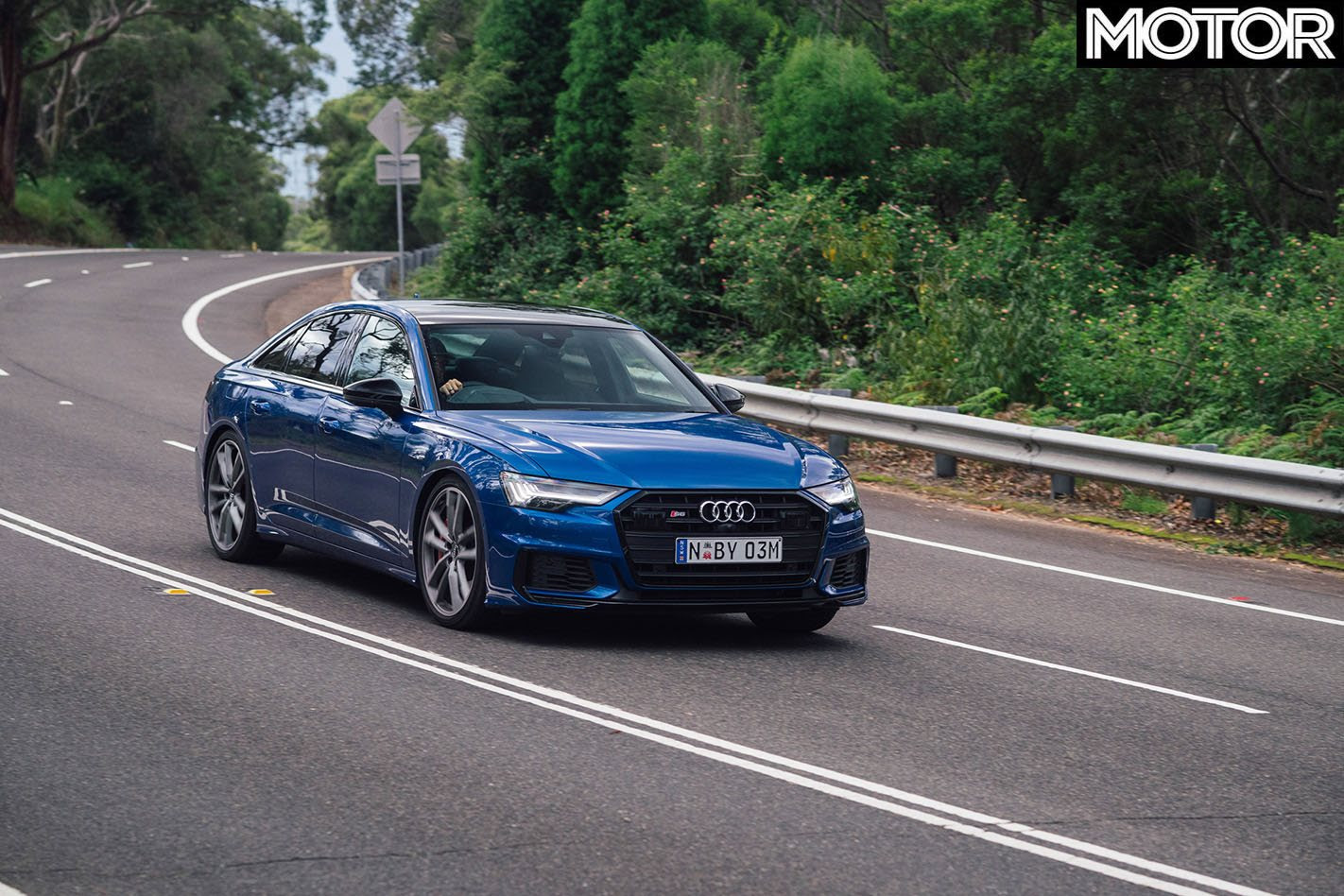 On top of this, while the progressive steering rack gains accuracy at higher speeds it’s not as linear or as responsive as we’d like and the S6 can get flustered when being hustled.

Mind you, it will rotate nicely if you nail your trail braking and hold its cornering line under power out of corners. We’d just suggest keeping  an eye on the front brakes during a blast, because while they might not wilt in the heat of battle, they can get a little smoky given they’re tasked with reining in the front axle in lieu of a limited slip differential.

We only wonder what potential lies undiscovered here since our car is missing Audi’s $7700 Dynamic package. The pack adds rear-steering out back and dynamic steering up front, along with an electronically-controlled rear LSD, and while the verdict is out on what effect they’ll have on the S6 we know they’ve transformed other Audis. 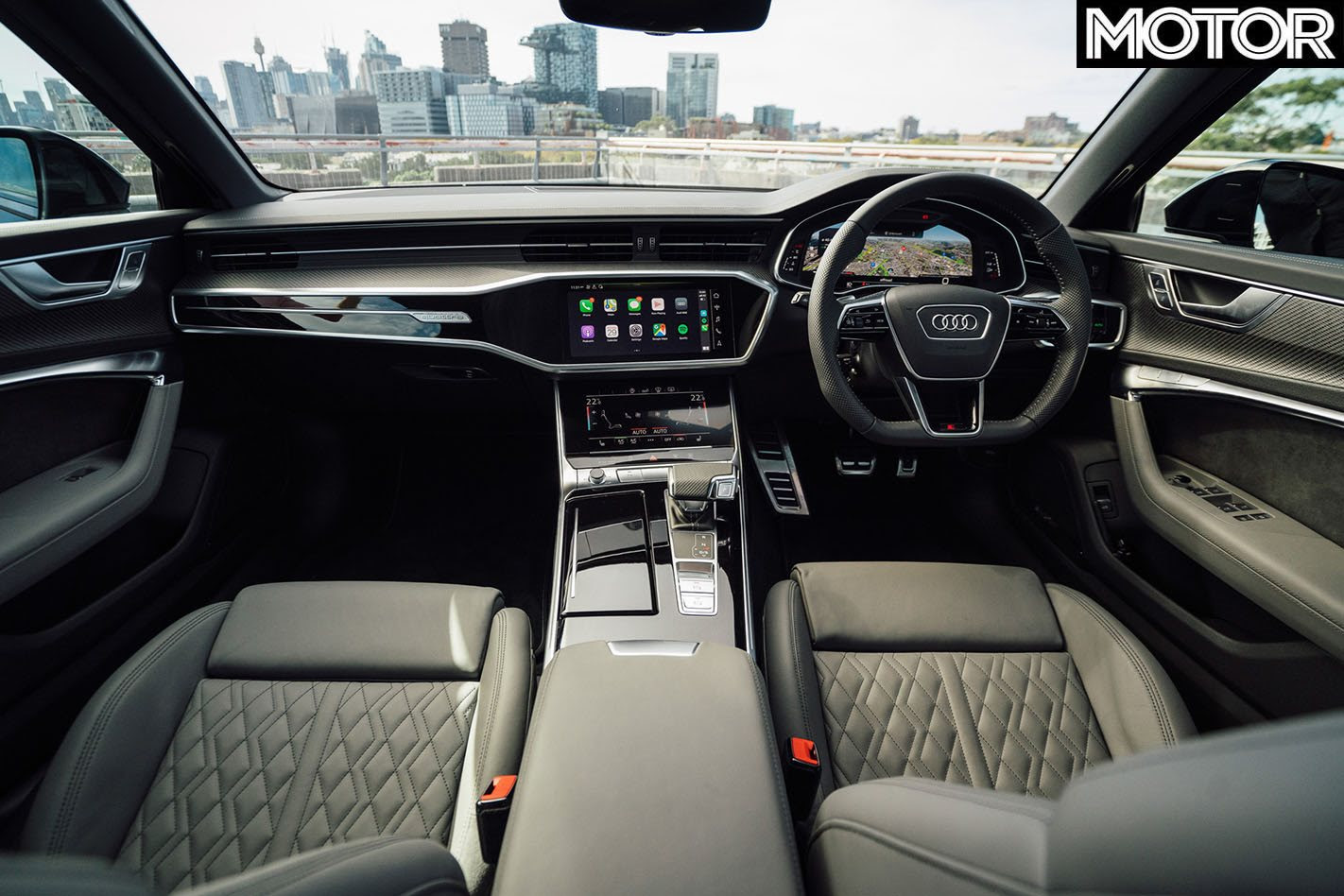 Until then, though, our S6 remains one dimensional in purpose. It’s built to turbo-charge long journeys and make sure that with a cloud-like ride, powerful brakes and sure-footed grip, touring at high speed is a pinch.

There is one hiccup. On a roll you can catch the drivetrain snoozing at steady speeds even when it’s primed in Dynamic mode, but we suspect it’s more a problem with throttle mapping than the auto’s actual hardware. The eight-speed is otherwise silky smooth and rarely puts a gear wrong. It’ll happily downshift and hold your selected cruise speed without as much as a vibration, even when selecting third gear at 110km/h.

Boosting its grand touring credentials on the open road are radar systems that co-pilot the car with eerie intuitiveness. The throttle pedal will shrug your foot off when it knows the car is approaching a lowered speed limit, while the lane keep assist is so accurate and smooth you almost trust it to take the wheel if it were legal. 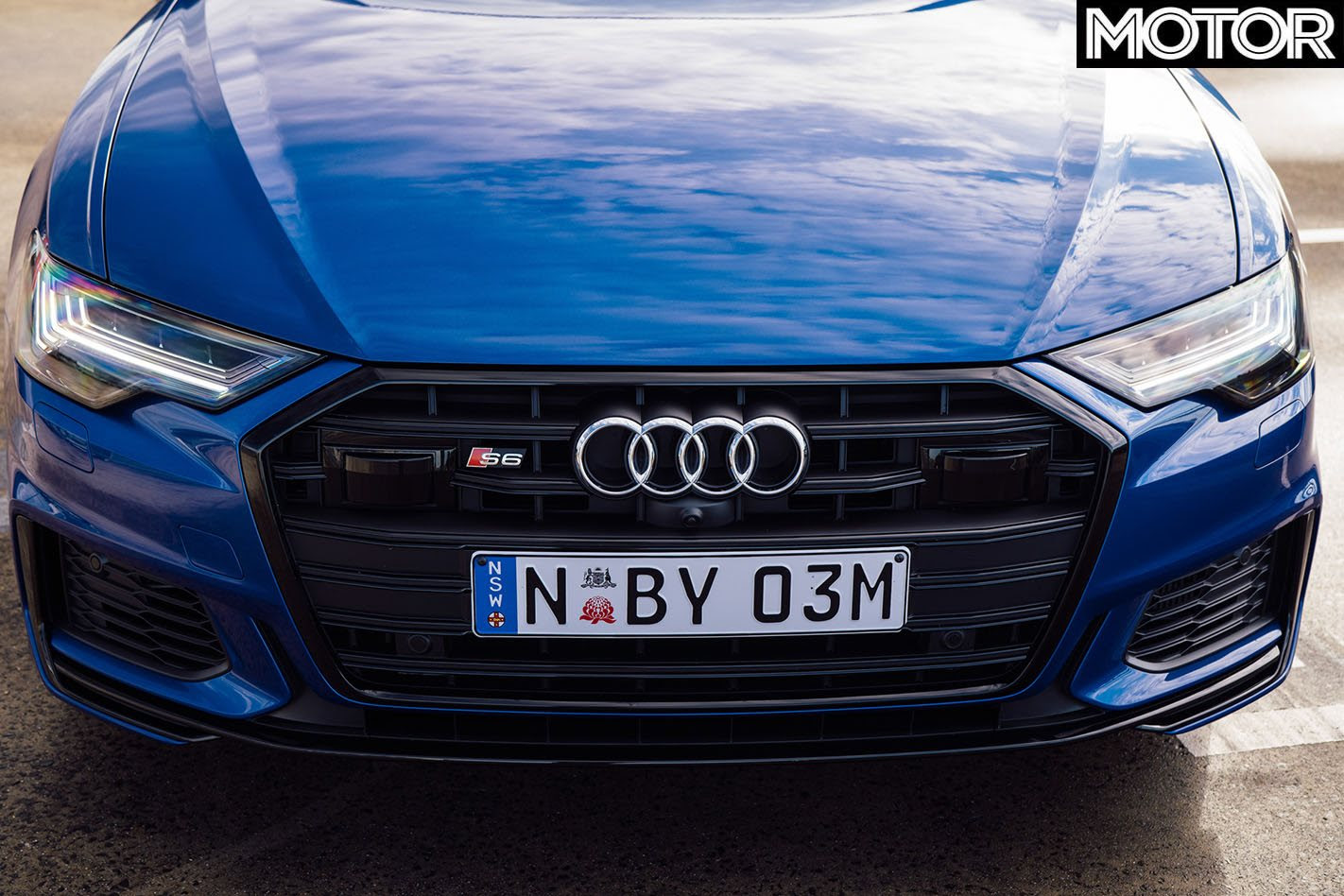 Ultimately, the S6 feels like the place where Audi’s different principles intersect. It’s as comfortable as the A8 yet more accelerative than an S4, but it’s also lost that spiritual link its forebears had with each RS6 for that all important exotic appeal.

We’ll just wait and see how much that matters when it takes on AMG’s hybrid E53 and BMW’s M550i xDrive.