In recent years Mazda has consistently been at the top of Australian buyer’s minds in the small car segment, but the latest generation Mazda 3 has had other ideas.

Instead of targeting hard-won buyers of the previous generation – as it’s done so successfully with the CX-5 – Mazda has taken the new 3 into a more premium space with a commensurate rise in price. 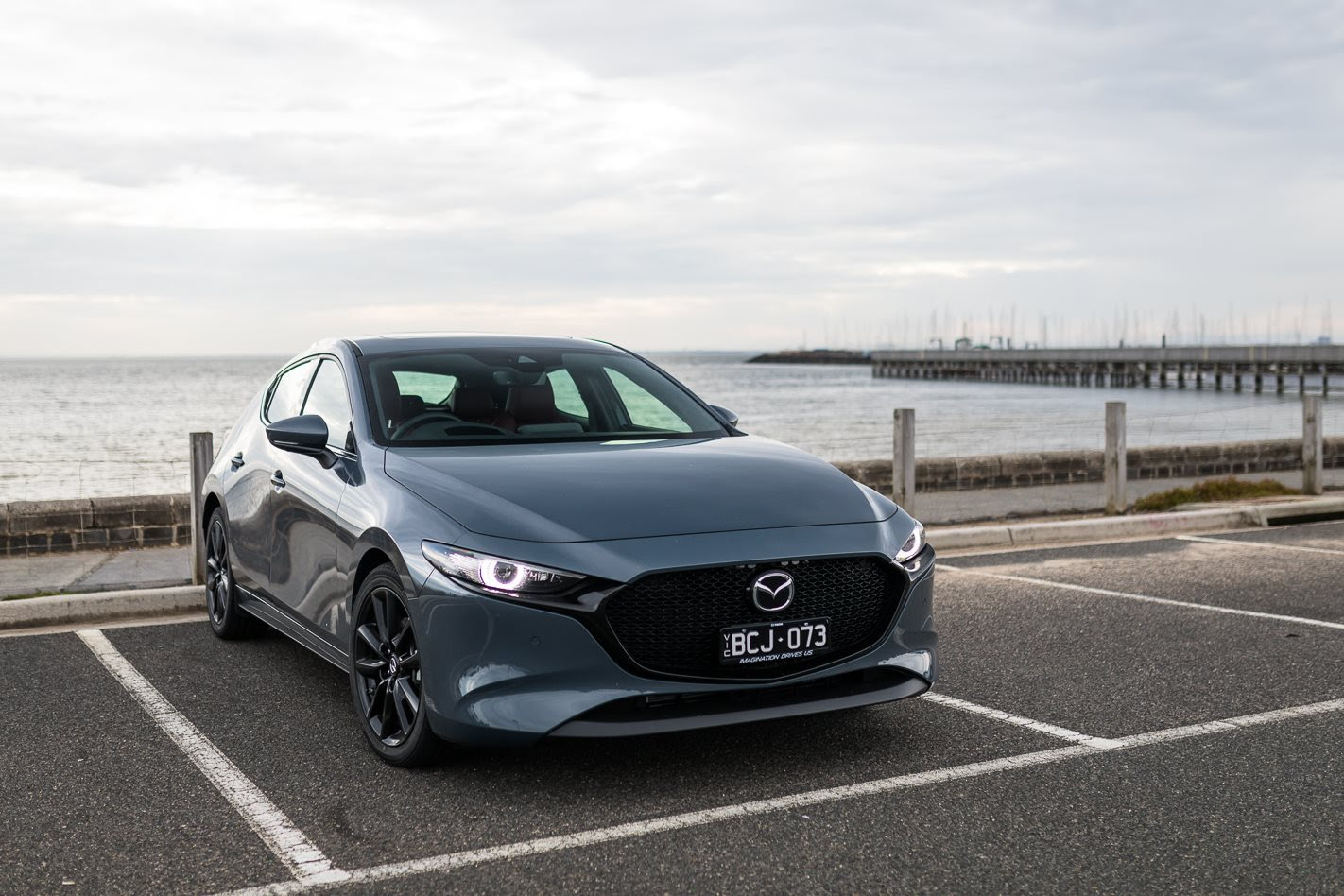 WhichCar has picked up a range-topping Mazda 3 G25 Astina to sample the new range over the longer term and on initial impression, and as the guy with the keys, I’m pretty excited.

It presents extremely well in its $495 Polymetal Grey metallic paint option, with a red leather interior setting off the colour combo nicely.

Set yourself down inside the interior and there’s an immediate air of quality compared to its predecessor that’s most welcome in a car that costs $38,590 (before on-road costs) or $43,573 driveaway in Victoria as tested. 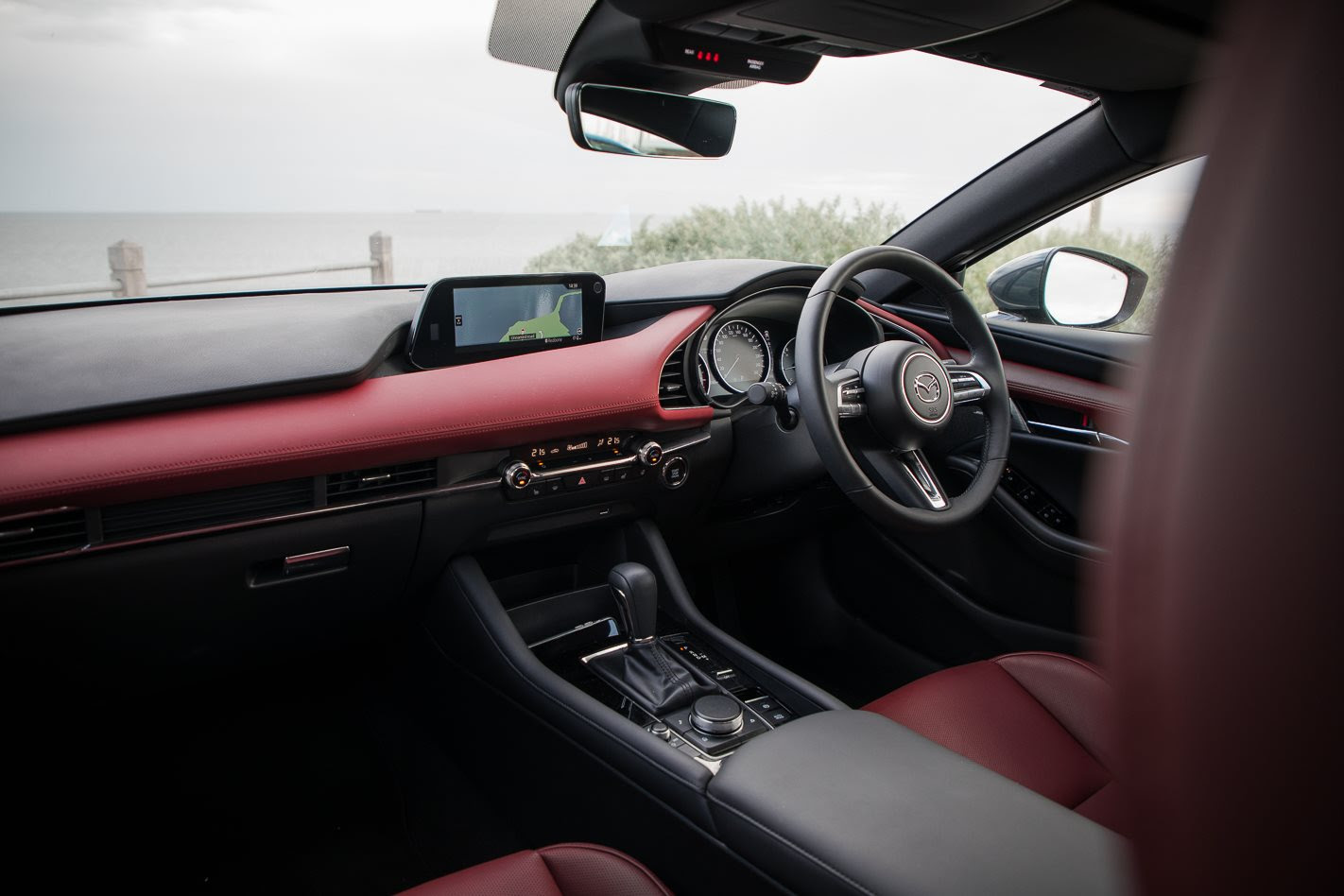 Hallmark additions of the new Mazda 3 range such as head-up display, keyless entry and push-button start, heated front seats and steering wheel, a 12-speaker Bose sound system and power mirrors are all here, and a large amount of safety technology is standard across the range too. 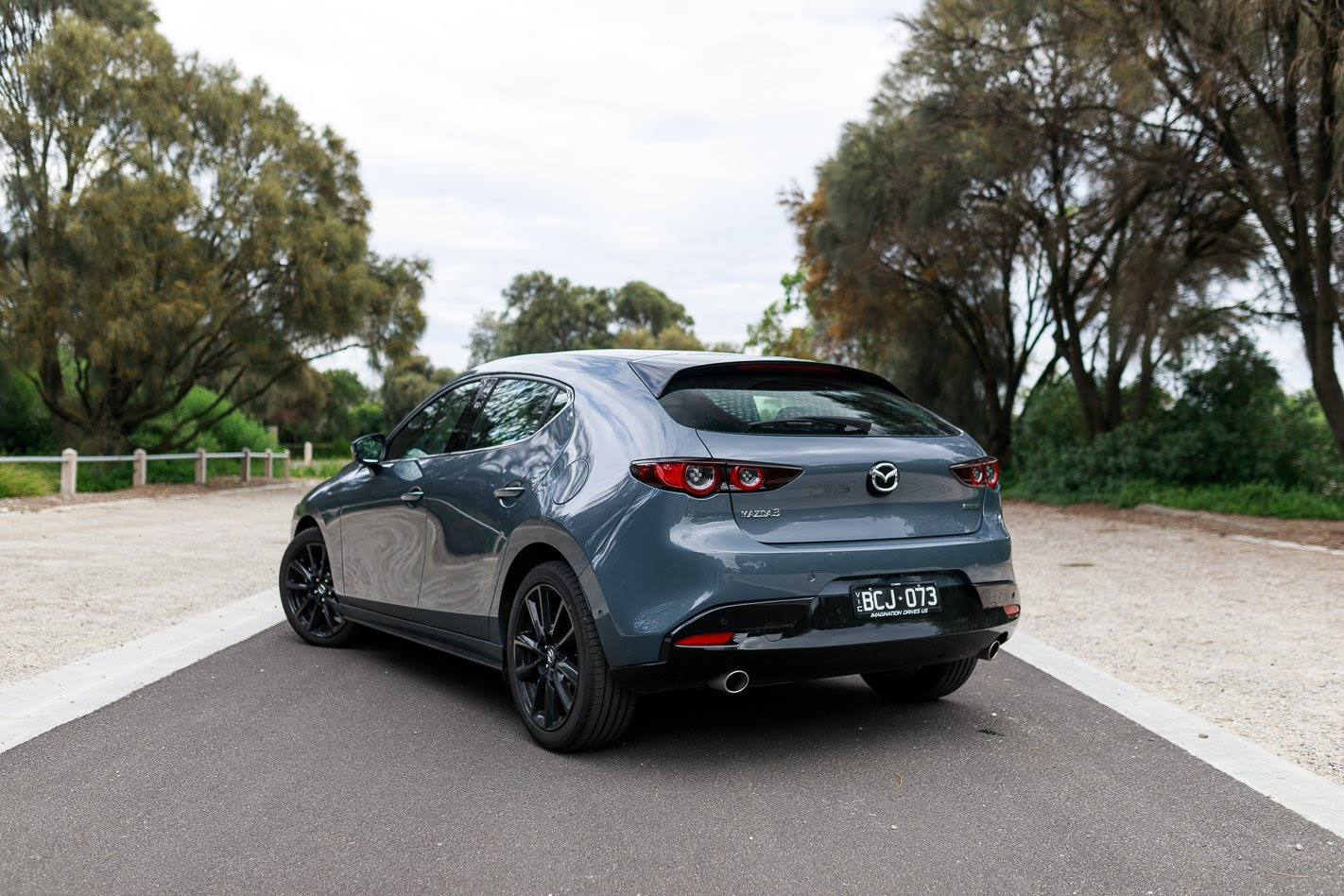 It gets the larger of two engines, a 2.5-litre naturally-aspirated Skyactiv-G unit sends 139kW and 252Nm to the front wheels.

Those power figures changed ever so slightly (an increase of 1kW/2Nm) in comparison to those from the same engine in the previous generation car.

But the most interesting part about this BP-generation Mazda 3 is the big step-change toward a premium product. It’s that angle that I’m keen to look closer at while I have BCJ-073 in my custody.

I won’t delve too deep into our experiences thus far, but I can tell you I love the looks and feel of the interior, and it’s a very easy car to live with for ducking to the shops for the vitals, although it can be difficult to see out of the rear.

I’ve not had much of a chance to stretch the drivetrain while parked on the lounge, either, so I’ll reserve judgement for a later date.

For the time being, I can’t take the car too far while coronavirus restrictions are in place, but I’m looking forward to getting a proper go behind the wheel. 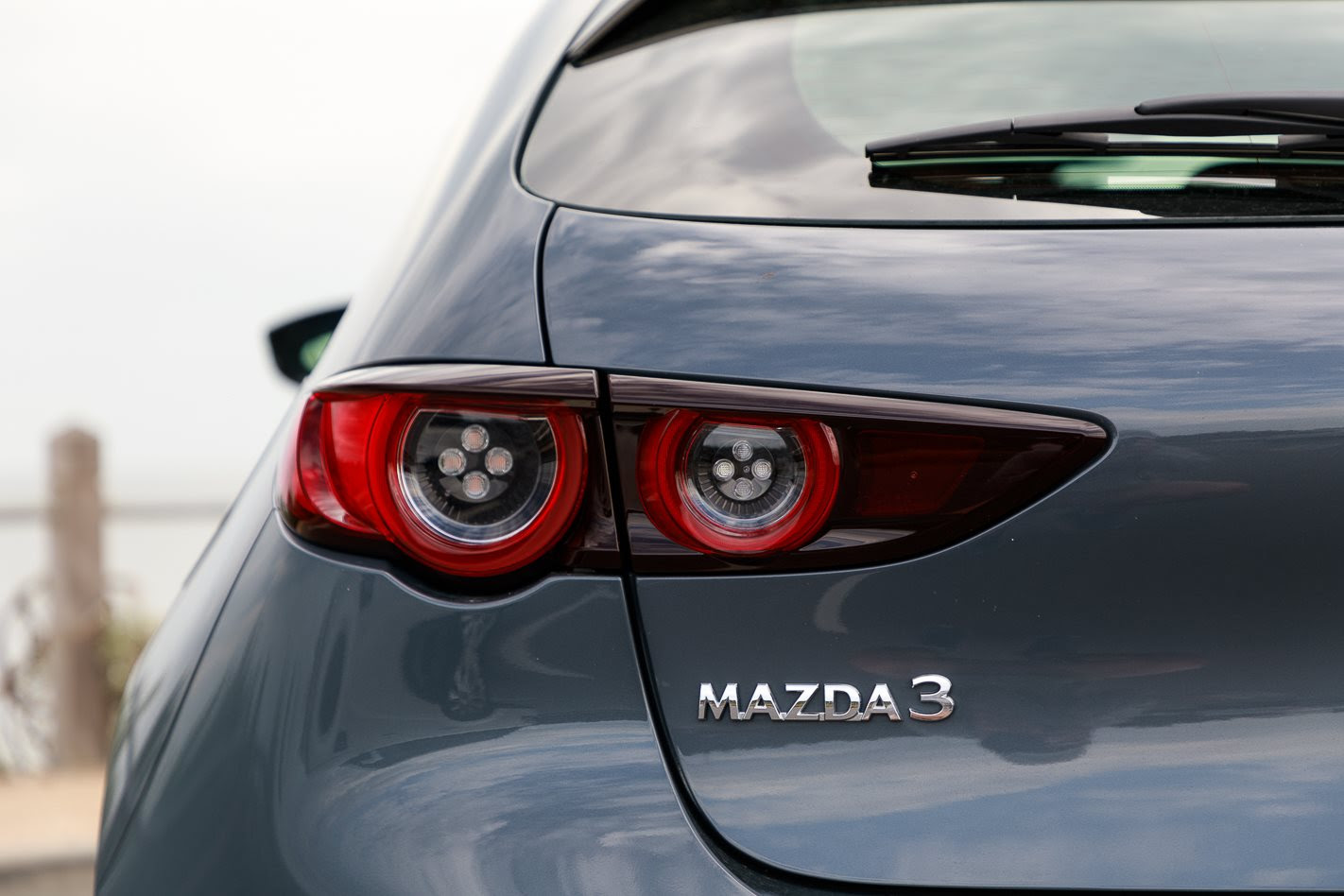 Things are looking up for our Mazda 3 long termer. As restrictions start to ease I’m seeing more opportunities to get back into the swing of things and go for a proper drive. In stark contrast, the month I’ve just spent in the Mazda 3 hasn’t been particularly exciting.

In between trips to the shops and to and from the local coffee shop, I feel bad that the little hatch hasn’t seen much of the world of late. Even still, BCJ-073 and I managed almost 500 kilometres which has been more than enough time to form some solid opinions on the most exciting – and most attractive – part of the car, the interior. 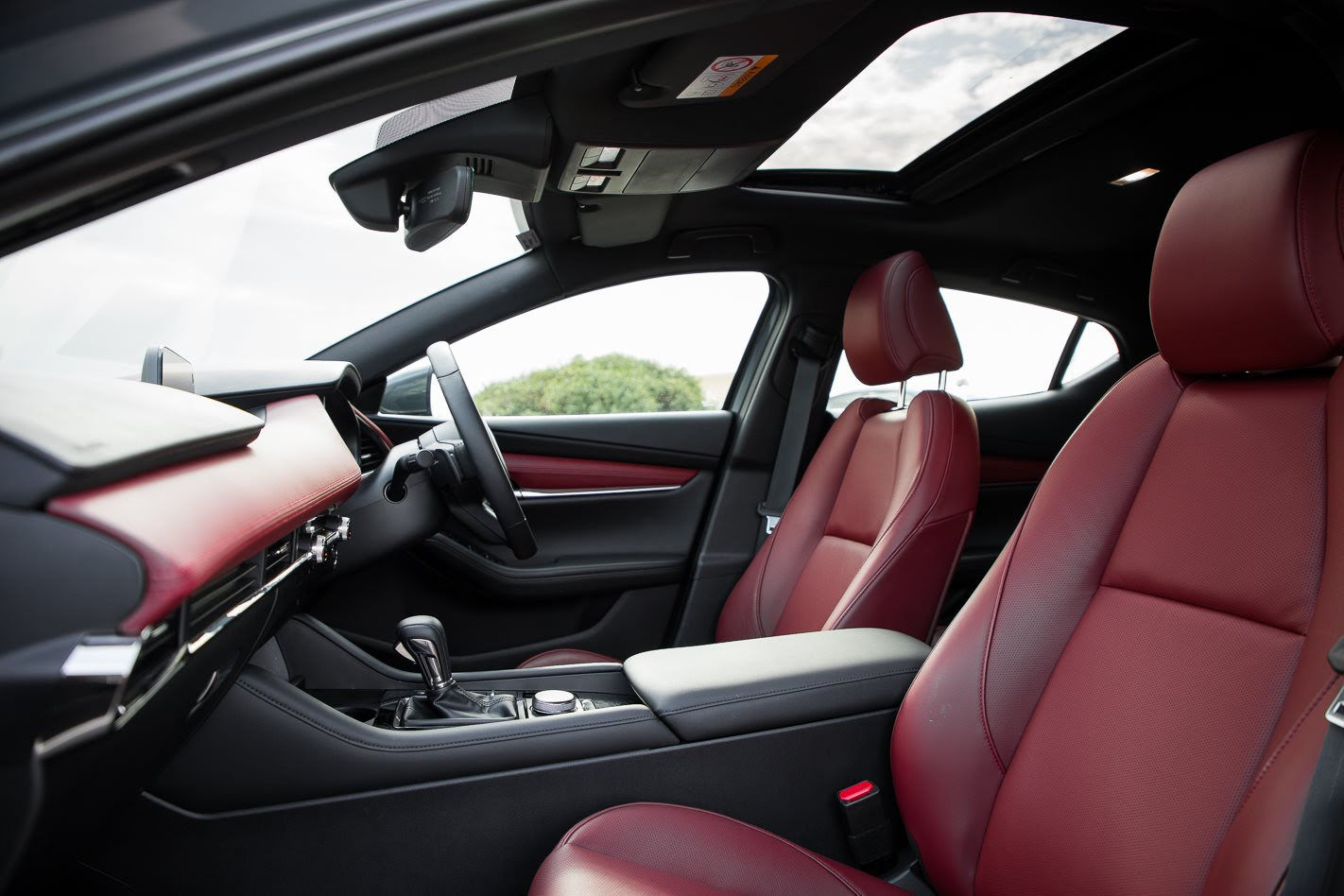 It’s what’s on the inside that counts, right? Mazda has focused most of its energy on interior design with the 3 and arguably, it’s the aspect that shines the brightest so far.

Being that it is a top-spec model, cabin adornments are of fantastic quality in a small hatchback sense, I can’t think of too many other small hatchbacks that I’d rather be inside – and that even includes some of the German ones. The red leather pairs extremely well with its grey exterior finish, and the design is particularly modern and minimalistic – very 2020. 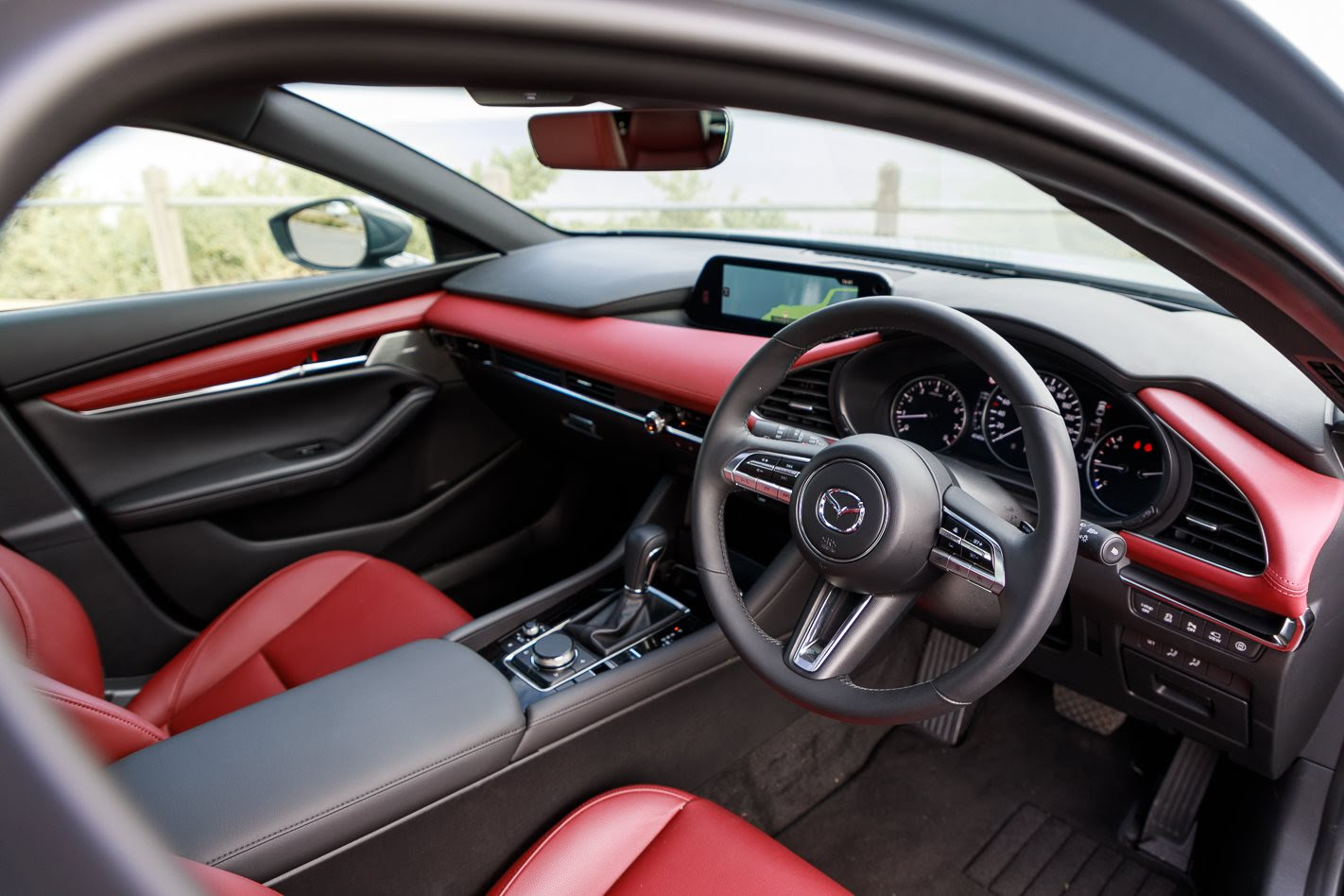 Just about every surface you touch is covered in a nice material, whether it be the soft leather of the steering wheel and shifter or the sturdy plastics found incorporated into the door cards. The 8.8-inch infotainment screen is a nice new unit to use, with commands all laid out in list form and shortcut buttons surrounding the rotary controller.

It’s eerily reminiscent of the BMW iDrive systems of old – but hey, if you’re going to to take inspiration, take it from the best. It is always a commendable system when I don’t have to default to Apple CarPlay, something which I’ve not done yet in the new 3.

Convenience features like the heated seats and steering wheel, as well as the memorised electric driver’s seat make it easier to get going quicker on these cold Melbourne mornings. The seats are firm, but remain compliant enough to be comfortable, and there’s adequate space up front allowing the driver to configure a great driving position. The back seats are tight, and although it’s a nice place to be, a six-foot-four somebody like me wouldn’t want to be sat here too long. As I sit here writing, the lack of head room and knee room are the main detractors, but on the upside I do have some rear air vents to keep me cosy.

Something that rear seat passengers may complain about is the lack of an open, airy feel, owing to the large C-pillar (which can make reversing quite the difficult task) and narrow window apertures. 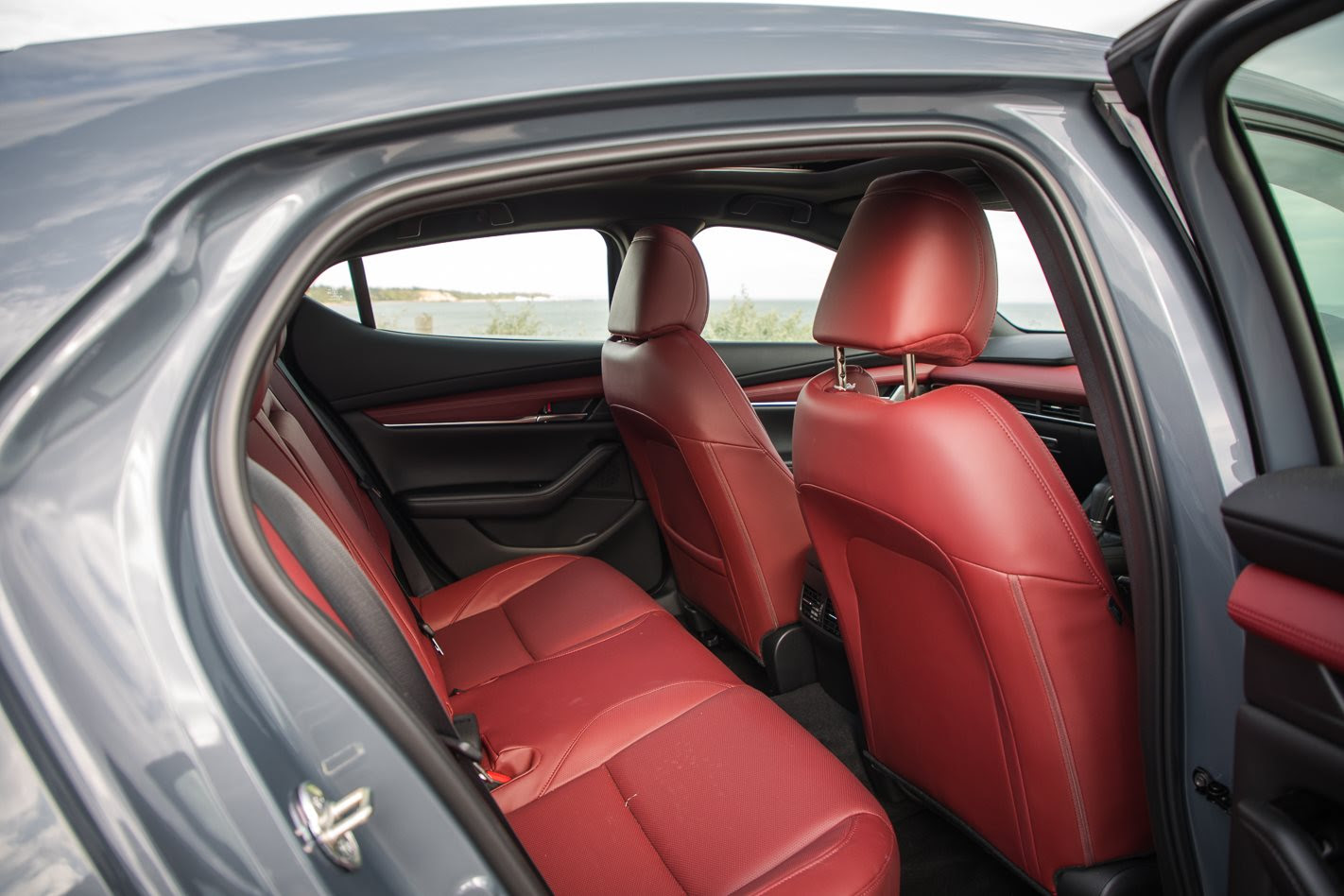 Storage is fairly well catered for especially in the front. There are two cupholders up front and a small cubby just in front of them, while a felt-floored, decent-sized centre console can store items as big as a diary. The boot is on the smaller side at just 295 litres of capacity (space saver spare included), beaten by both the Volkswagen Golf and Ford Focus.

One thing I’ve grown to love is the 12-speaker Bose sound system which not only looks nice with its metallic speaker outlet grilles on the doors, but offers a resounding boom and tight top-end that’ll make you want to blast tunes even on the most mundane of trips. As we look toward another month of Mazda 3 ownership, I’m keen to get out and about now that restrictions are easing and experience more of the 3’s driving characteristics. Stay tuned for the next update which will focus more heavily on what the Mazda 3 G25 Astina is like to drive.

Our Mazda 3 G25 Astina has quickly gone from a garage queen to being in hot demand. I’ve not realised it until just now but it seems we’ve put on a very respectable 1600 kilometres onto the odometer – not bad considering the current global circumstances. I can’t take all the credit for the kilometres driven though – our mates at Street Machine borrowed BCJ-073 during May to complete a fuel economy test that involved running the car on different grades of petrol, the result of which you’ll see on a future episode of WhichCar TV.

That said, I did notch up nearly a thousand kays of that myself, using it as a runabout around town and finally getting the chance to get out for a great drive through Marysville and beyond.

But let’s start with where the Mazda 3 spent most of its time – suburbia. 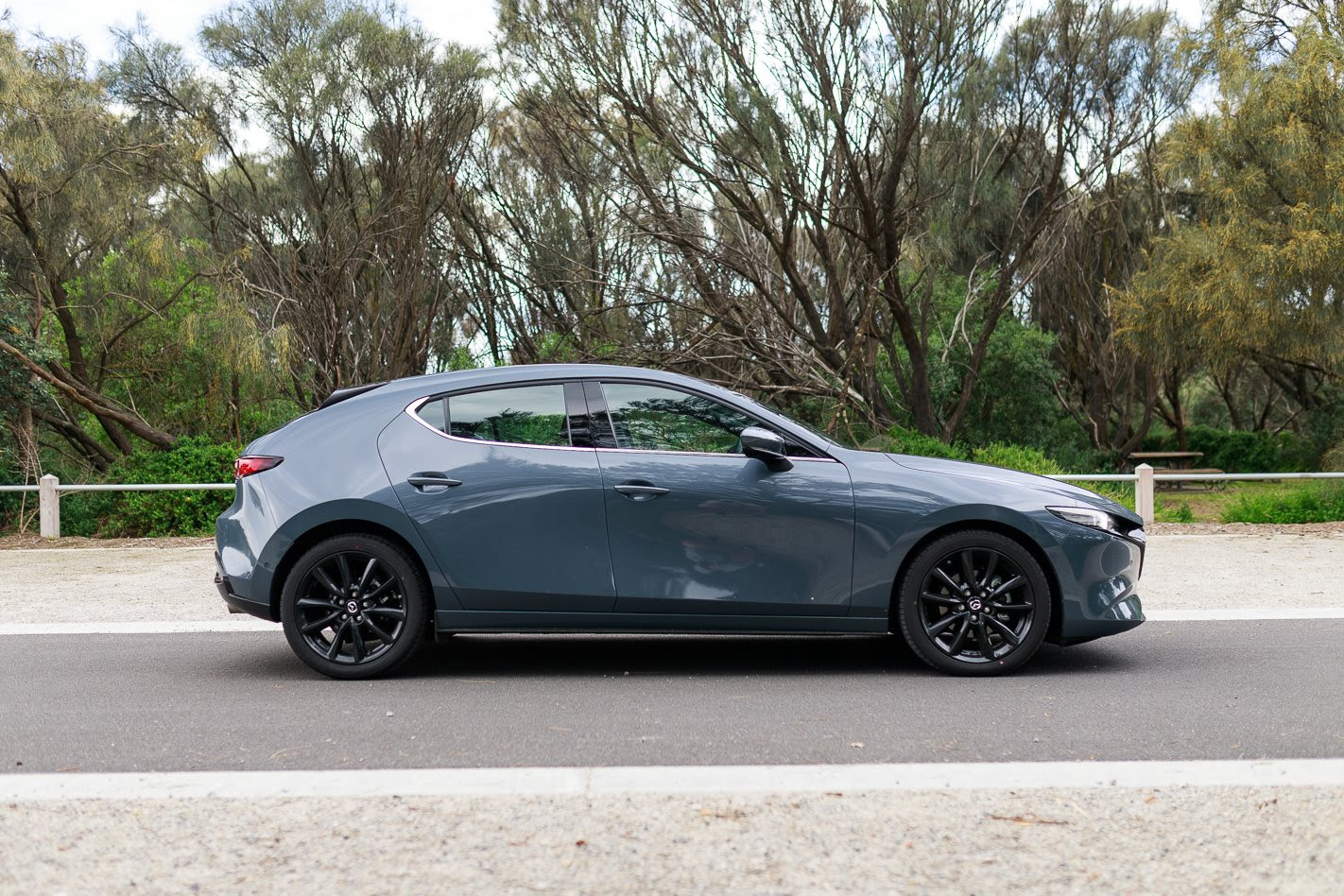 Especially running in top-spec Astina trim, getting about town quickly and efficiently in the 3 is ridiculously convenient. The little things like keyless entry, high-definition 360-degree cameras and push button start allow you to simply jump in and go.

The light steering feel and low centre of gravity encourages a quick change of direction, resulting in a car that actually feels fun to wield when zipping through an urban environment. Many of the driving aspects of the new 3 feel like a generational leap forward but the one part of the driving equation that doesn’t feel as evolved is the carry-over 2.5-litre naturally-aspirated engine. It’s not so much a problem around town as speeds are lower and there’s traffic about, but you often find yourself stabbing at the accelerator wanting for that extra boost of torque that only occurs once you’re high in the rev range. The problem is exacerbated when driving rurally.

Overtaking becomes a much more planned manoeuvre and it can’t complete the procedure in the same way a Volkswagen Golf (the car the Mazda 3 was benchmarked against) could. In a car that pushes the game along so far in almost every other aspect, retooling the old engine feels like an afterthought. That said, we’re super keen to see what the SkyActiv-X engine brings to the table when it eventually arrives.

On the upside, my drive out to Marysville was remarkably composed for such a small hatch. Mazda’s focused attention on noise, vibration and harshness really shines through in a good way, as wind noise, road noise and sound insulation in general is incredibly refined. One thing that I’ve not been able to gel with is the active cruise control, which is far more nervous than other manufacturers’ systems and leaves a ginormous gap between you and the car in front. 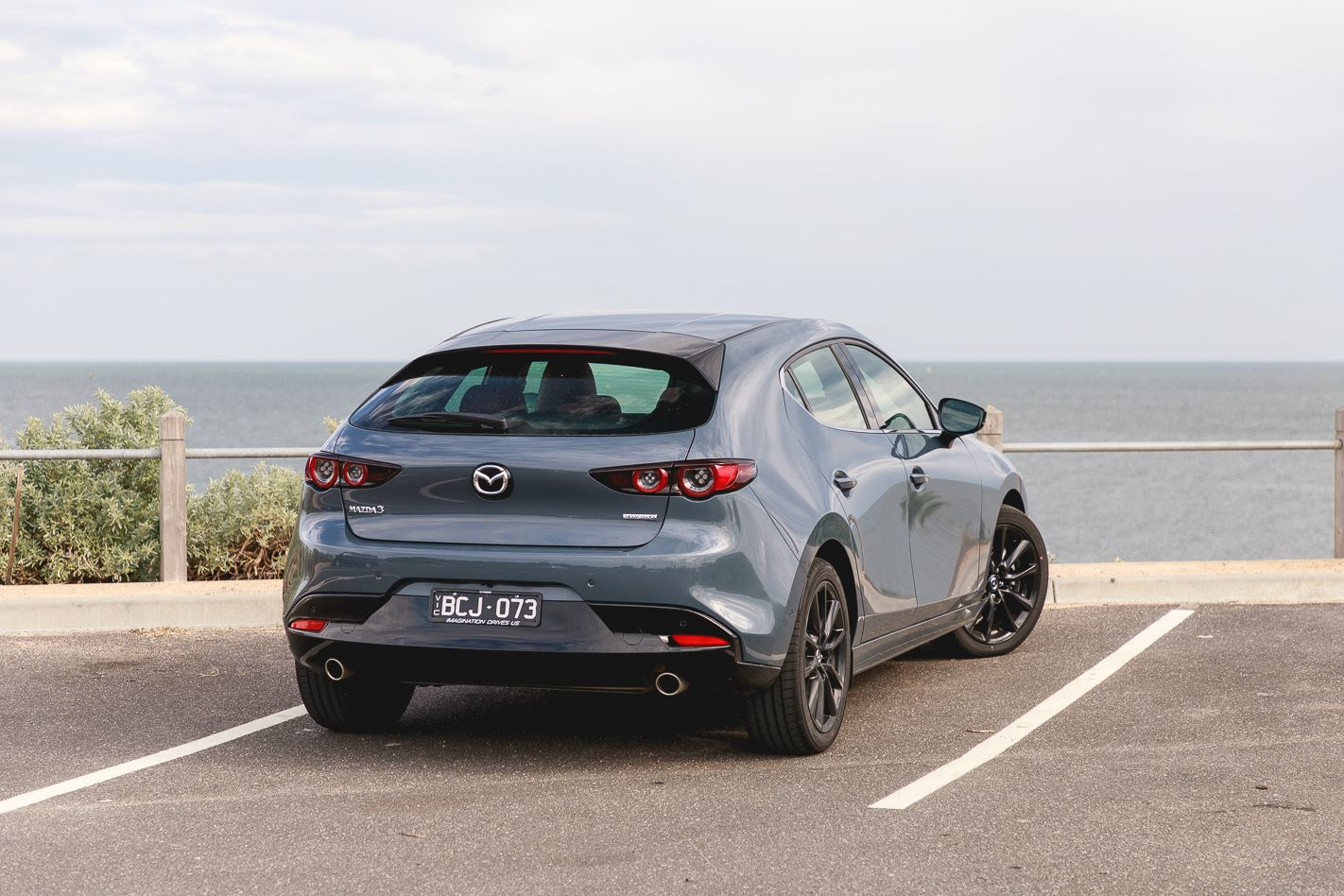 It feels planted no matter the road you drop it on, with excellent road holding and a precise turn-in when the roads get twisty. The brake pedal feel is slightly bizarre and will need some adjusting to – you really have to press hard to get any real stoppage power out of them. The steering isn’t especially tactile but it is direct, with the nose decisively heading in whichever direction the steering wheel is twirled. It’s far more capable than a small hatch should be, offering a rewarding drive experience in a segment that’s increasingly focused on value, space and efficiency. The 3’s ride profile is somewhat sharper than the average small hatch – especially over sharp edges – though comfort levels are still high.

We’re now entering out final month with the 3, in which we’ll reflect on whether it’s been an enjoyable and fit-for-purpose runabout. Stay tuned for final verdict in July.