Compact SUV’s – Best of the Best

Compact SUV’s Put To The Test

Good design is thorough down to the last detail. Nothing must be arbitrary or left to chance. Care and accuracy in the design process show respect towards the user.” You may know this as one of Dieter Rams’ 10 principles of good design. Rams, one of the 20th Century’s great thinkers on industrial design, formulated these tenets in the 1980s but they’re as valuable today as they ever were, all underpinned by one central commandment: “Weniger, aber besser” which translates to “Less, but better.”

You can probably think of many cars that embody the polar opposite of this theme. “More, but worse” could apply to the wares of any number of mass-market manufacturers. Pile it high and sell it cheap. The inevitable consequence of this is a race to the bottom of ever-tightening margins. Premium manufacturers realised a long time ago that customers are willing to pay handsomely for good design, and those margins have been eyed enviously by the mainstream brands. Take these three small SUVs as prime examples. Mazda, Toyota and Kia all have certain limits to their brand equity, how far you can stretch upmarket, and yet the C-HR, CX-30 and Seltos models assembled here sit at or very near the top of their respective ranges. 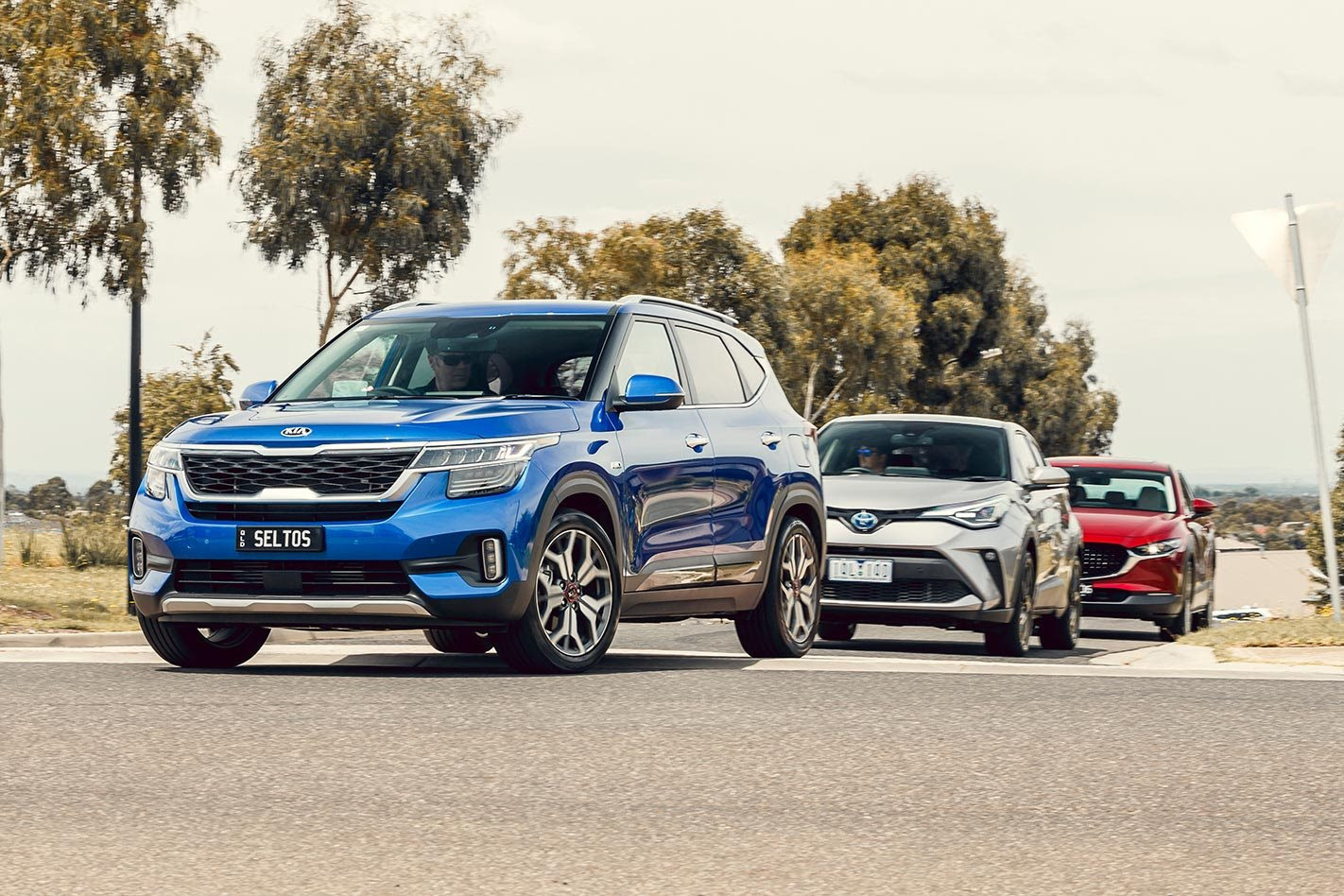 The target customer in the circa-$40K bracket could certainly run to a bigger RAV4, a CX-5 or a Sorento but chooses not to. These downsizers embrace the notion of less but better, but which of the three best delivers that rare result of a small car that delivers big-car feel-good factor?

You’re probably most familiar with the Toyota C-HR. It’s been with us since 2014 but has recently been treated to a do-over. The big news is that a 90kW/142Nm 1.8-litre petrol-electric hybrid powertrain now sits atop the line-up, offering a more mature feel to the attention-deficit 1.2-litre fizzer that was the C-HR’s sole choice of powerplant. Some additional interior spit and polish hasn’t gone amiss either, most evident in this range-topping $36,440 front-wheel-drive Koba model. The other two cars represent a gentle step up in price, exacerbated by the fact that we don’t get the Euro-spec 137kW 2.0-litre C-HR hybrid. The long-awaited Mazda CX-30 is tested here in $41,490 front-drive G25 Astina guise and powered by a punchy 2.5-litre atmo engine good for 139kW/252Nm. Is this beginning to look like a mismatch to you? Then keep reading. 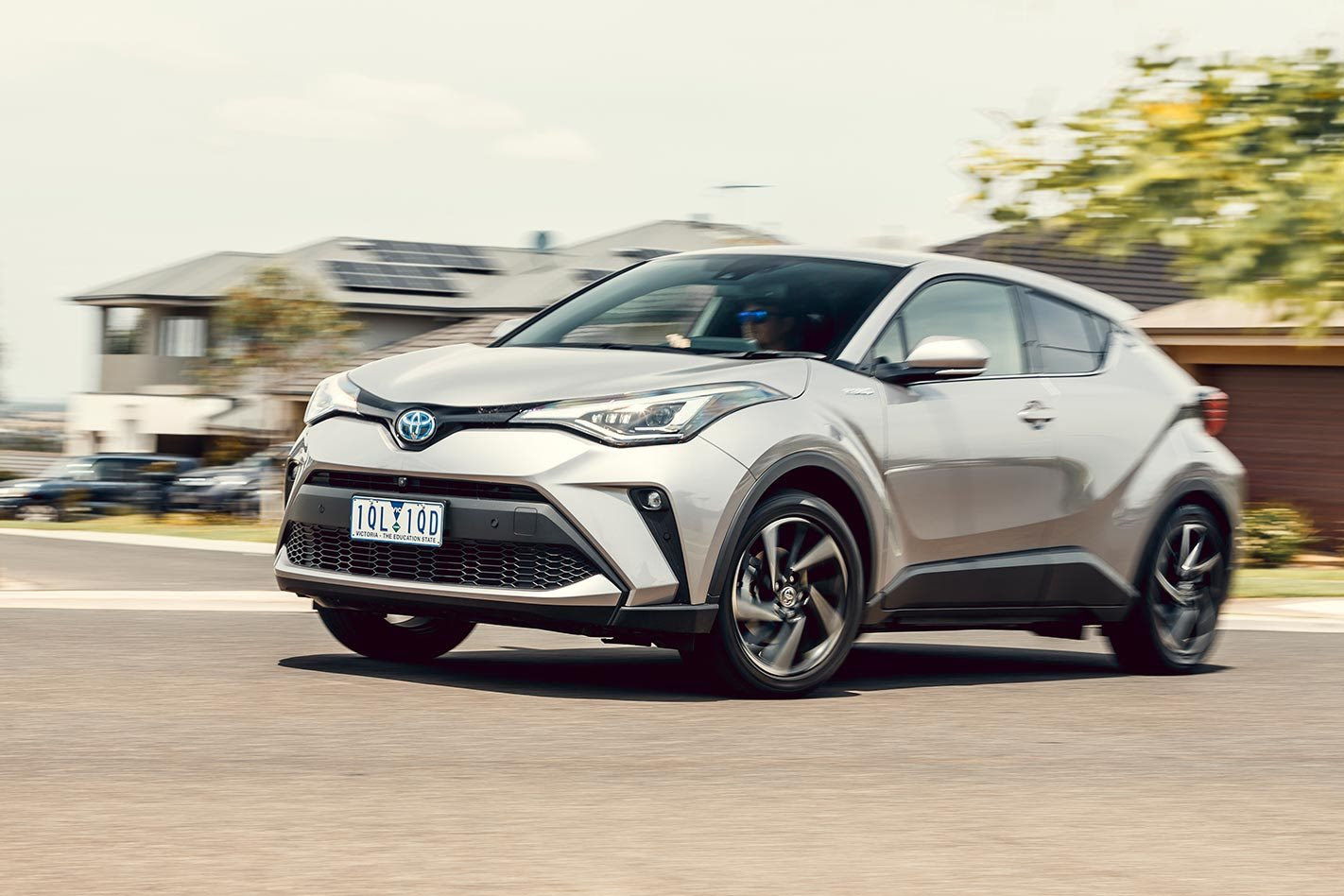 Rounding out this upwardly mobile triumvirate is the Kia Seltos GT-Line. At $41,990 (driveaway), the 130kW/265Nm Korean is the biggest vehicle here, and the only one to sport a turbocharger and all-wheel drive. It’s also notably the best equipped. None of the others have a Qi wireless charging pad, electric adjustment on both front seats, heated and cooled front seats or roof rails as standard. Jump in the back and it feels half a class bigger, with 70cm of rear passenger legroom versus 65cm for the Mazda and 62cm for the Toyota. Those positions are reflected in height from the rear seat cushion to the roof, whereby you get 98cm in the Seltos, 94cm in the CX-30 and 90cm in the C-HR, its nickel-metal hydride battery housed beneath the rear bench.

In almost every dimension that matters, the Kia is bigger. You sit higher too, the hip height of the front seat at its lowest setting being 65cm, compared to the 58cm of the C-HR and the 56cm of the Mazda. Therefore, it’s surprising to learn that it runs on a wheelbase 10mm shorter than the Toyota and fully 25mm shorter than the Mazda. 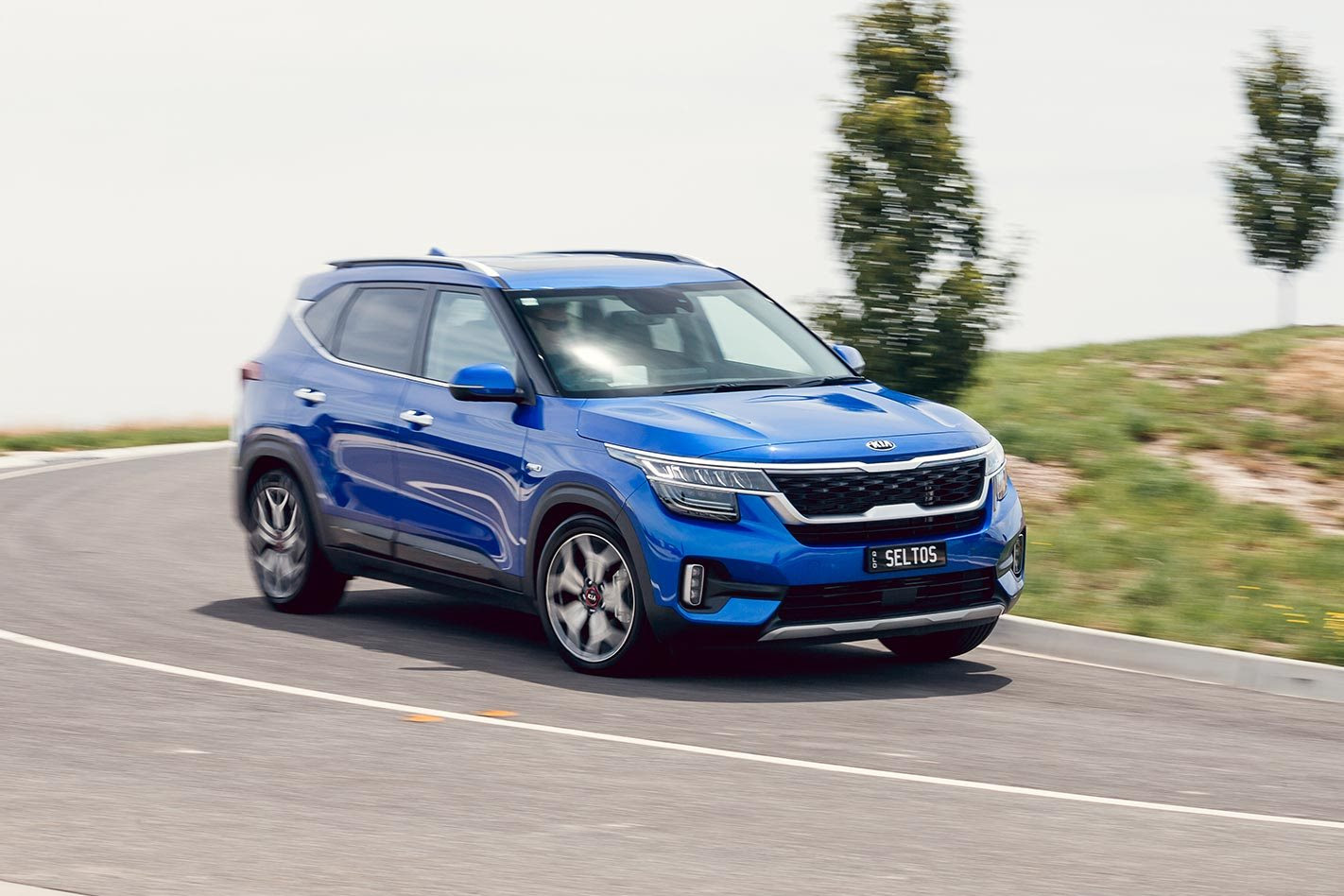 Flip open the tailgate and it’s advantage Kia again. The Seltos’s 498-litre boot aces the paltry 317 litres of the Mazda and the Toyota’s 318 litres. For family buyers, this comparison may be over at this point. Both the Seltos and the CX-30 feature electric tailgates, while it’s good old biceps power for the Toyota.

Numbers only tell you so much, though. The C-HR counters by being the sharpest steer of the bunch. The old C-HR was good, but the hybrid drive system just adds an element of polish that makes the Toyota feel more slickly engineered. The CVT transmission means that it’s hardly possessed of the most rewarding acoustics, but body control is excellent, the steering is crisp and its high-frequency bump absorption seems head-scratchingly good. In fact, so good is the ride and handling that it leaves you crying out for more power. Gazoo Racing, do the right thing and give us something with at least 150kW.The brakes, however, can feel awkward to modulate at crawling speeds, setting up a gentle nodding head action.

The CX-30 sits you low and hunkered, behind a near-perfect steering wheel; round, not too thick of rim, unobtrusive controls on its face and furnished with neat shift paddles. Power take-up is glossy and unfussed, the six-speed auto being the only torque-converter system here, and it shows in the way it easily slurs gears. 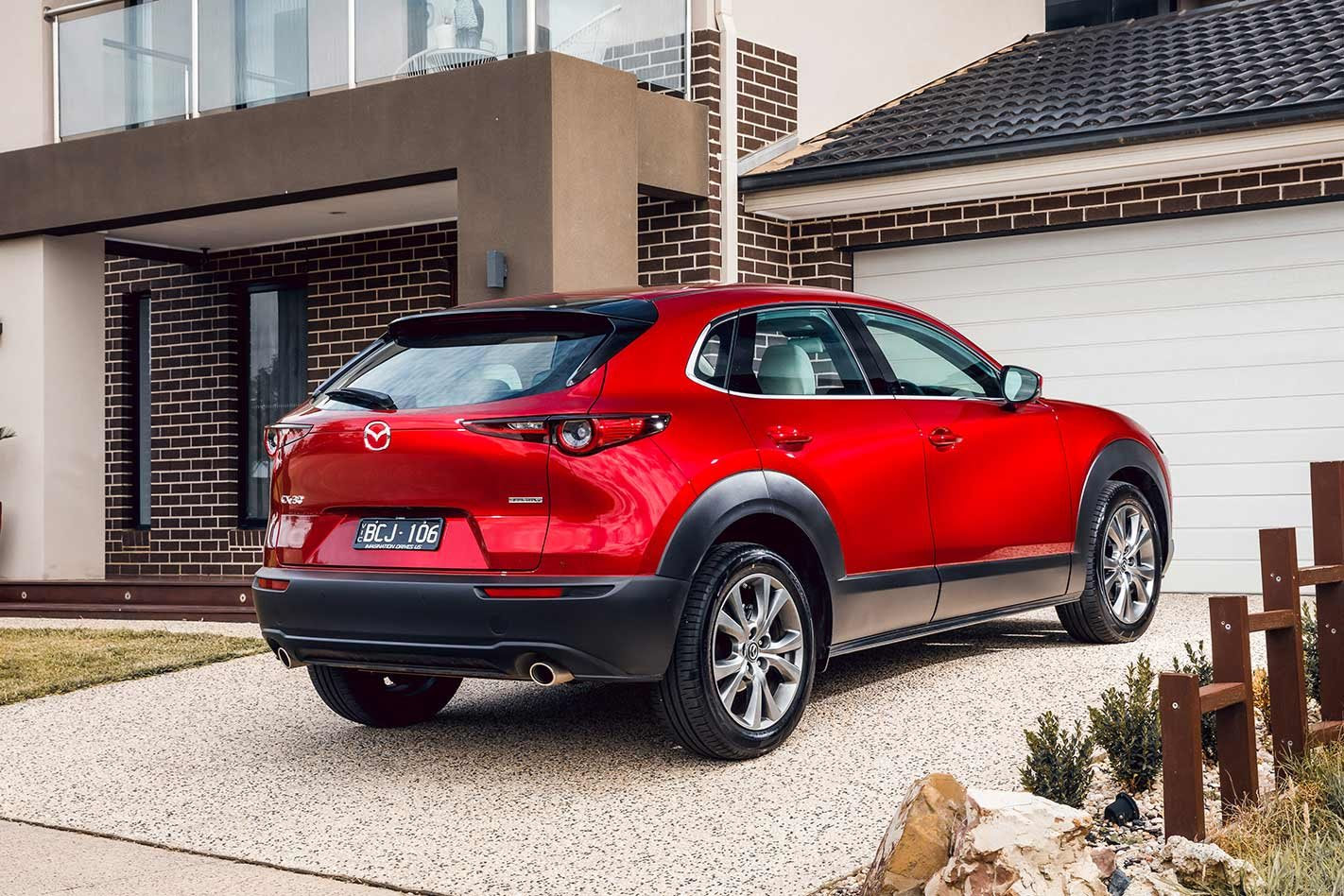 All of this lulls you into thinking that all aspects of the CX-30’s dynamics are similarly burnished, but that’s not always the case. The ride can be terse, with some suspension bump and thump entering the passenger cell and the front end is the vaguest of the three cars here on turn-in. It could perhaps benefit from a marginally heavier gauge anti-roll bar up front to prevent the feel of it leaning so heavily onto its outside tyre on corner entry. What’s more, the Sport mode holds a gear for a very long time and the 2.5-litre engine can be vocal. Without the aid of forced induction, you will occasionally need to give the SkyActiv-G lump a good prod to hustle it along and it’ll let you know it’s there.

By contrast, the Seltos’s turbocharged torque advantage means that at 1500rpm it’s making its full complement of 265Nm whereas the Mazda CX-30 is, with the same number of revs on the board, generating around 200Nm, or 20 percent less. Small wonder that the Seltos feels so unflappable at everyday speeds. The seven-speed dual-clutch transmission is a sweet shifter, responding crisply when switching the drive modes between Eco, Normal and Sport, but up the pace and the Seltos’s relaxed ride quality nevertheless conceals a pleasantly chuckable chassis. It’s the quickest of the bunch against the clock, just pipping the Mazda and easily gapping the relatively puny Toyota. That’s despite the fact that trying to get it off the line cleanly is a frustrating exercise, the dual-clutch ’box feeling flaccid and doughy upon initial engagement. Once into its stride the Seltos pulls cleanly, but there’s an inverse relationship between pace and fuel economy, the Kia drinking more than 50 percent more juice than the tardy but frugal Toyota on test.

The Seltos is the most practical and best equipped, while the Toyota is the most spirited through corners, the most adventurously styled, and easily the most economical. That leaves the Mazda CX-30, a car that could easily be dismissed as something of a compromise between these two extremes. 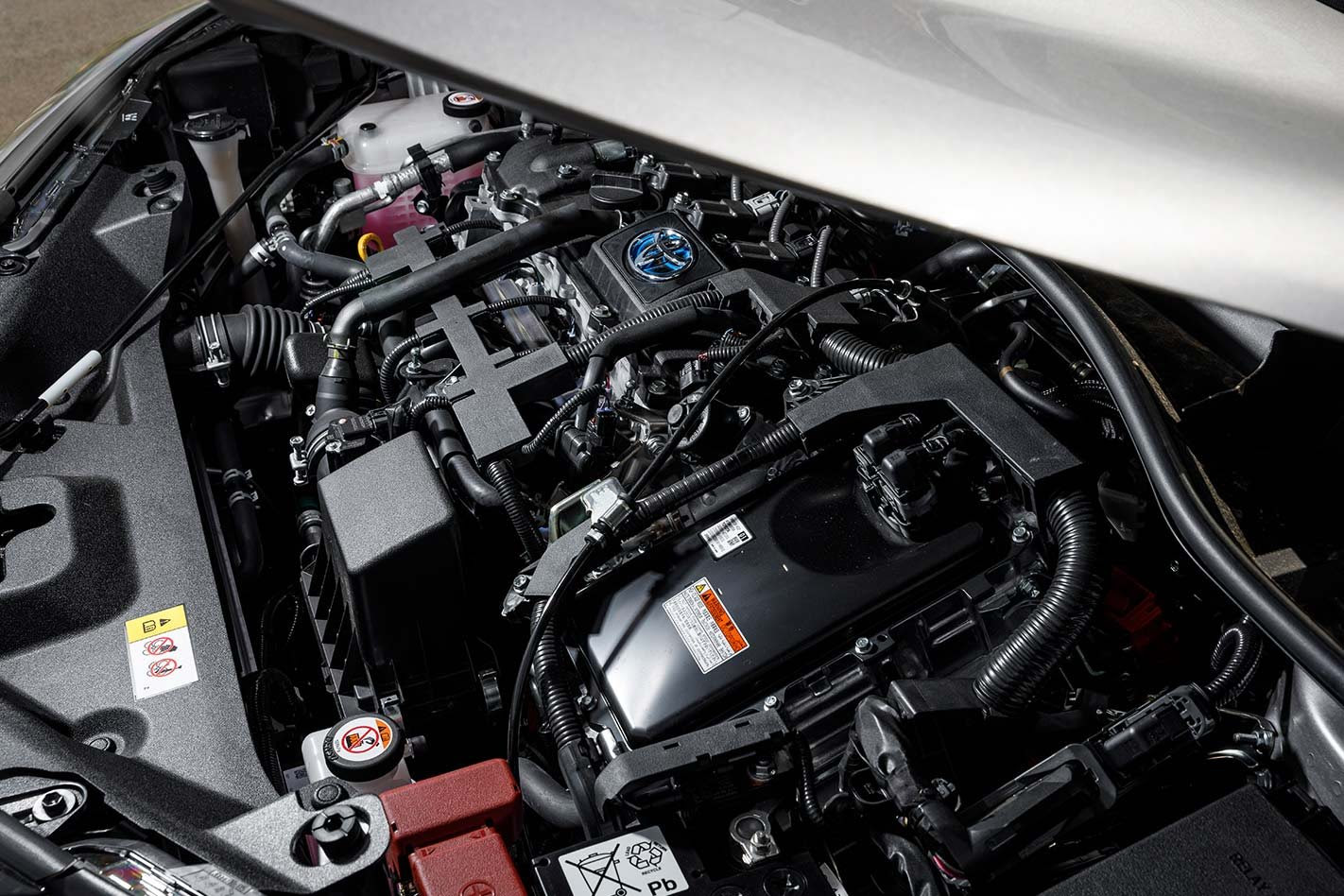 In truth, the Mazda does something neither of the others can quite carry off. It’s the only one of the three that feels comfortable in its own skin at $40,000. The Kia feels like a $30,000 vehicle with a lot of toys. The Toyota, despite its interior modernisation and slick hybrid drivetrain, still doesn’t possess a cabin that looks or feels some way removed from the norm. Both offerings run out of breath at around $35,000 and you shouldn’t be tempted to pay much more.

The CX-30 embodies another of Rams’ principles: Good design is aesthetic. The aesthetic quality of a product is integral to its usefulness. But only well-executed objects can be beautiful. No other manufacturer in the industry can surface a vehicle with the skill of Mazda. The way the light plays on the CX-30’s flanks is a world apart from its rivals here and the black cladding on its body has the effect of lengthening and removing bulk from the painted sheetmetal.

The cabin execution is also leagues beyond its immediate rivals and the attention to detail isn’t just meticulous. It’s borderline obsessive and evidenced in the quality of materials, of stitching, of understanding why keen drivers want to push the shifter forward to downshift, of positioning the pelvis in the seat to allow the spine to act as a natural shock absorber, and a thousand other things. 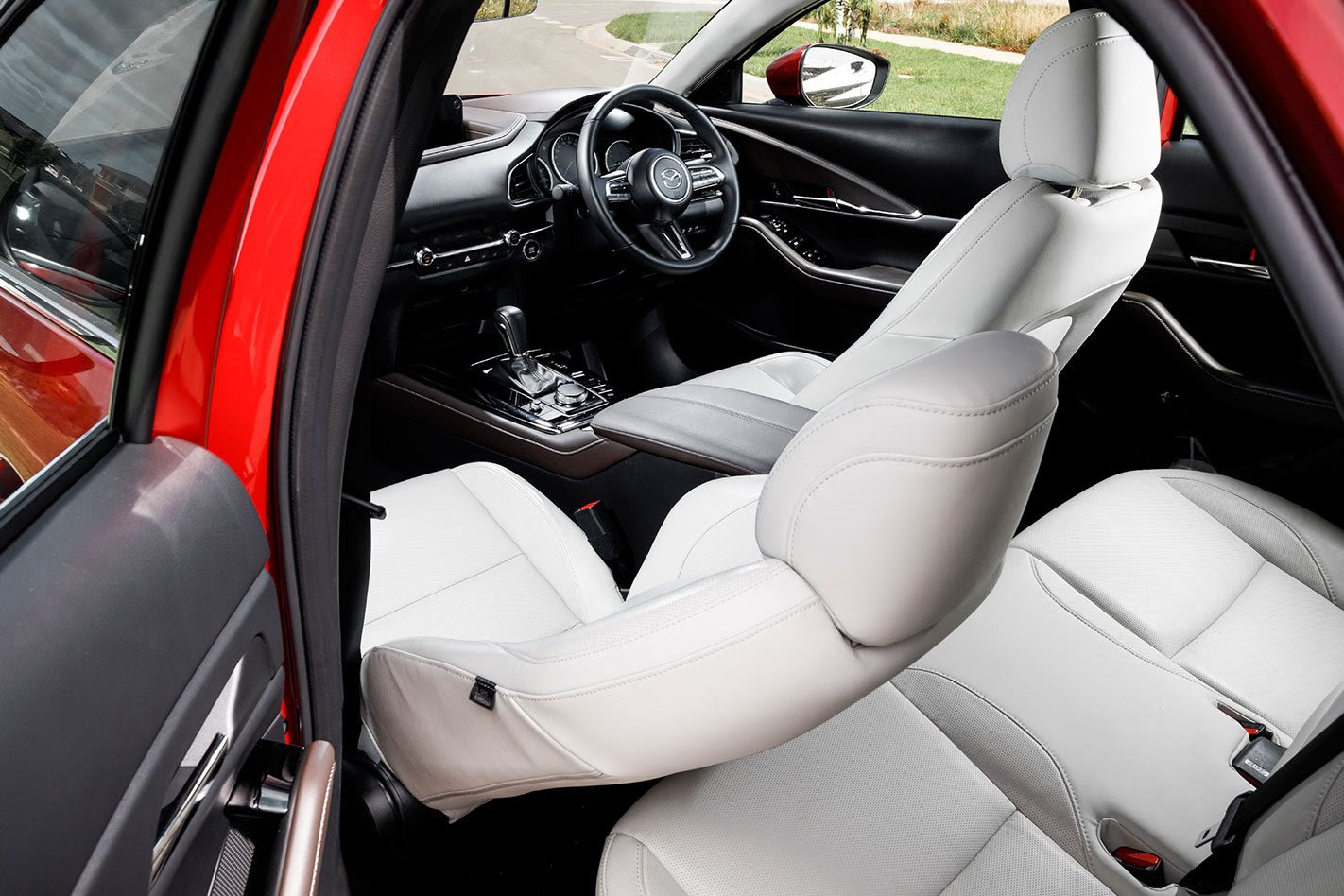 It’s floating the head-up display nebulously on the windscreen with neither too much nor too little information, where the Seltos has you peering at a vibrating plastic shard virtually on the same visual plane as the main dials. Behind it are the visual clutter of wipers and bonnet swage lines. Mazda understands that a HUD shouldn’t require you to refocus your eyes to take in the information.

Kia doesn’t understand this, and there are many other examples where Mazda understands the use-case instances in this specific market sector better. For instance? The CX-30 feels comfortably the most luxurious of the three but tips the scales the lightest while delivering the most power. We like that combination. 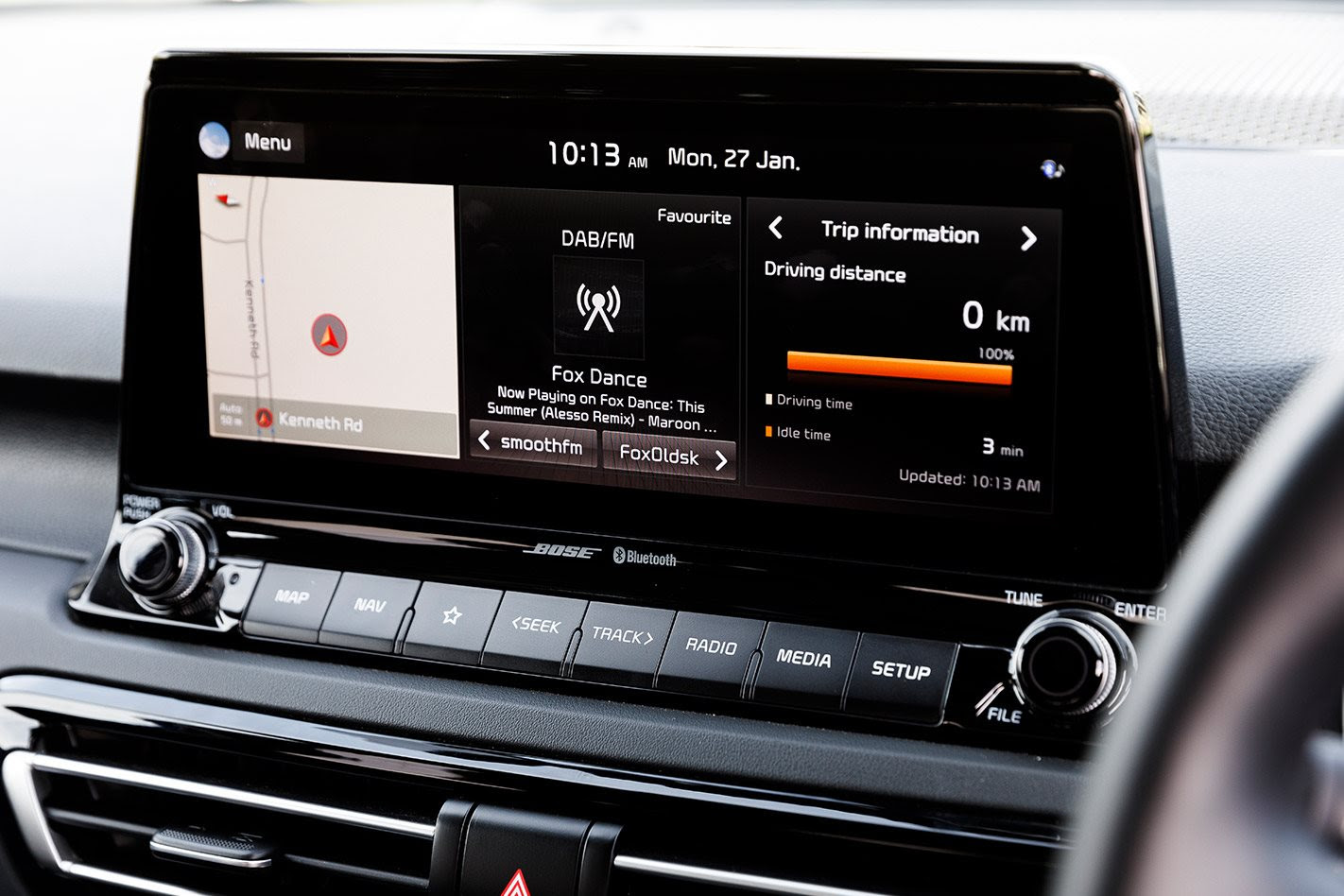 It’s not going to appeal to everyone, though. The Seltos’s superior space, generous kit list, turbocharged grunt and the not inconsiderable factor of a seven-year warranty will make it a no-brainer for those comparing spec for spec against both the Japanese cars here. It’s a well-rounded, fire-and-forget sort of proposition. What it’s not is a car to find any great sensory delight in. Does that matter here? We’d argue that it does, and more acutely at the top end of the range than when doing the maths at the entry level.

Ultimately, you’re buying a car in this class because you want something of a manageable size but without small-car compromises on quality. While there’s a lot to be said for both the Kia and the Toyota, the vehicle here that best fulfils that brief is the Mazda CX-30. There’s a delightful clarity in the way it understands its task. Less but better, if you like. 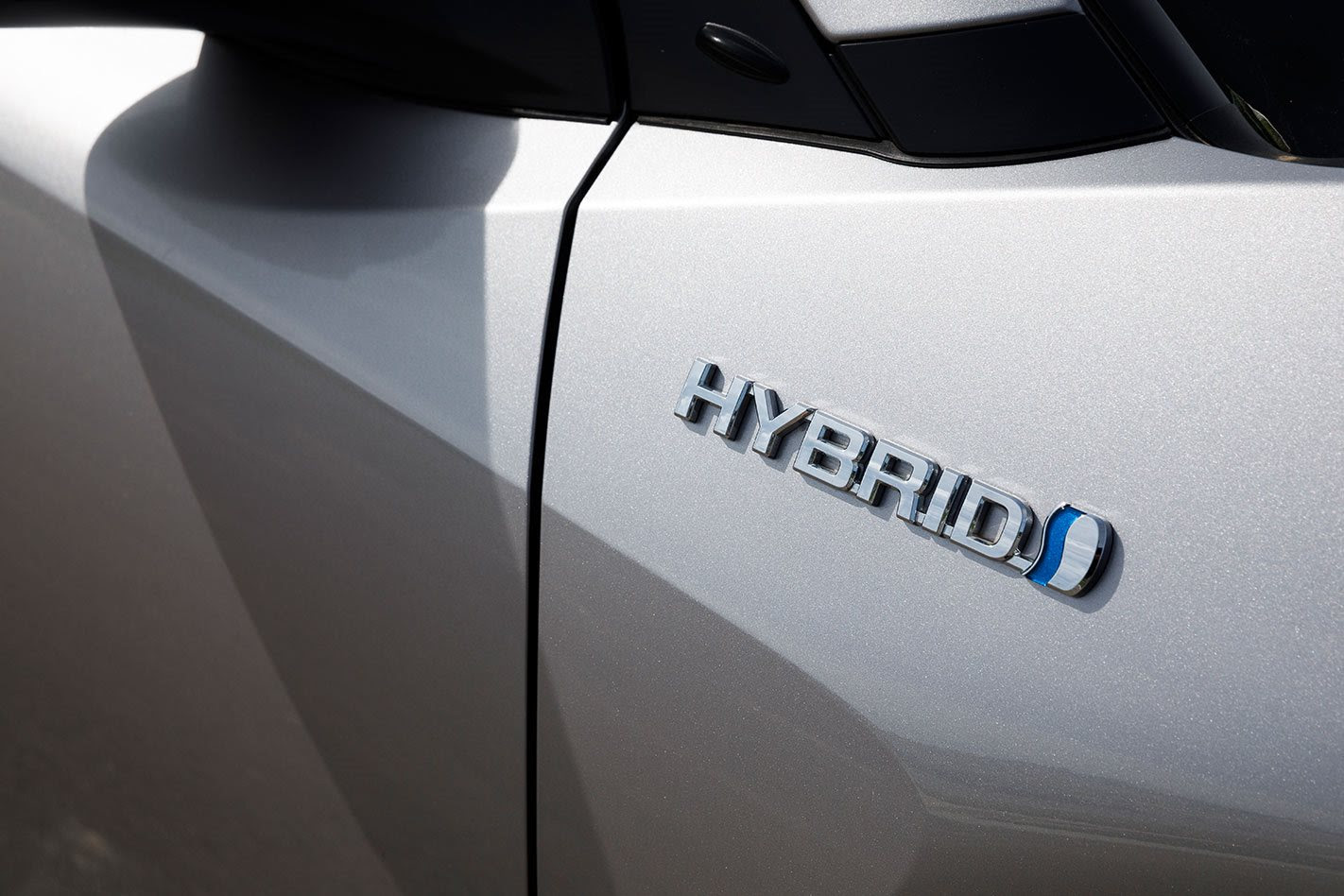 Toyota claims the greatest thermal efficiency of any mass-produced petrol engine for the C-HR hybrid. Due to the large-volume exhaust-gas recirculation system, improvements in combustion efficiency and innovative ways of managing heat and reducing friction, the 1.8 hybrid lump registers a maximum 40 percent thermal efficiency. That betters the 37 percent of the first Prius’s 1.5-litre unit and the 38.5 percent level of the 1.8-litre engine in the third-gen Prius.

You don’t need a long memory to recall a decent finish for the Seltos in January’s compact SUV megatest. That car had a 2.0-litre atmo engine, front-drive, a torsion-beam rear end and a CVT transmission. The one showcased here features a turbo 1.6, all-wheel drive, multi-link rear suspension and a dual-clutch gearbox. Although the sheetmetal looks similar, they’re chalk and cheese. 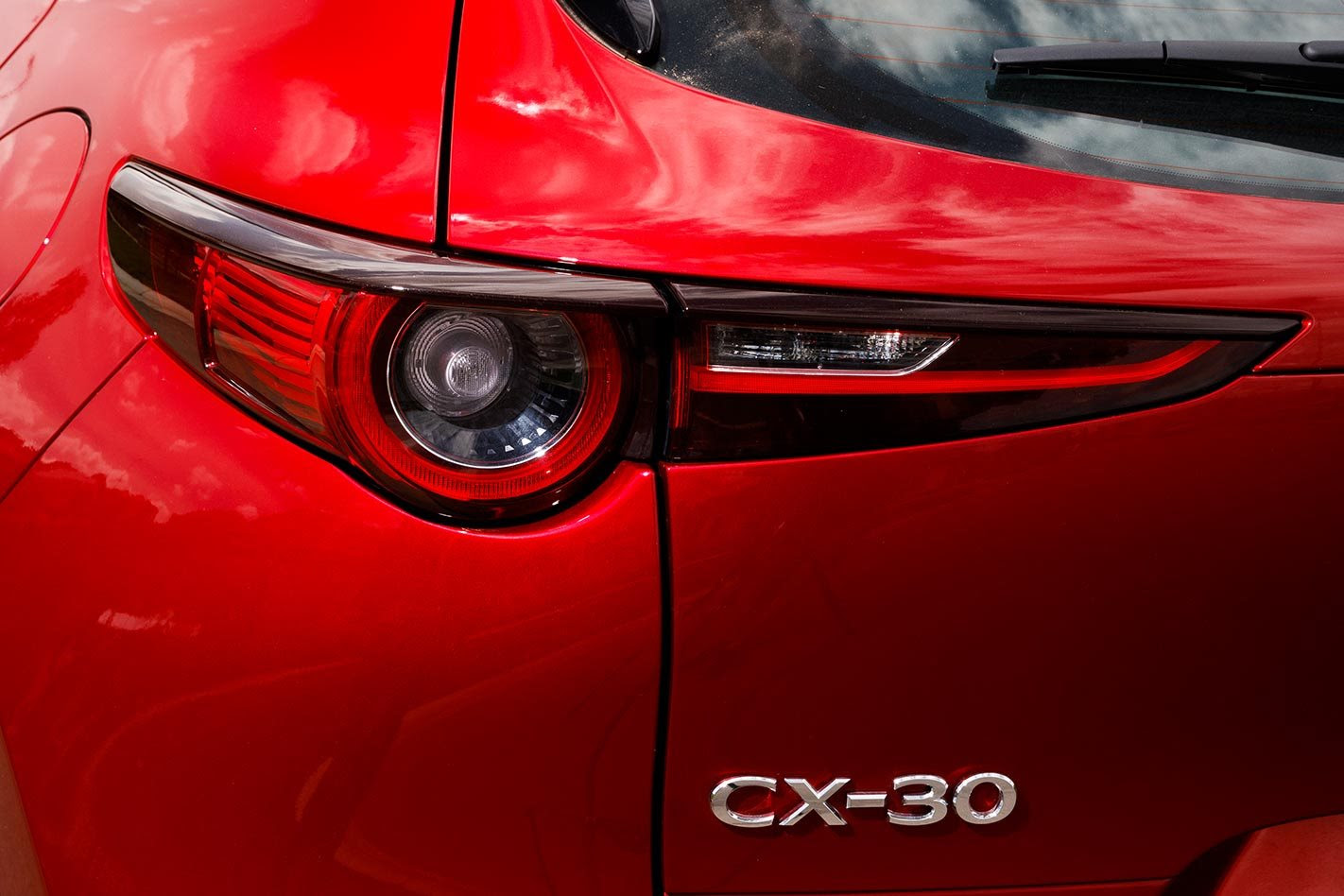 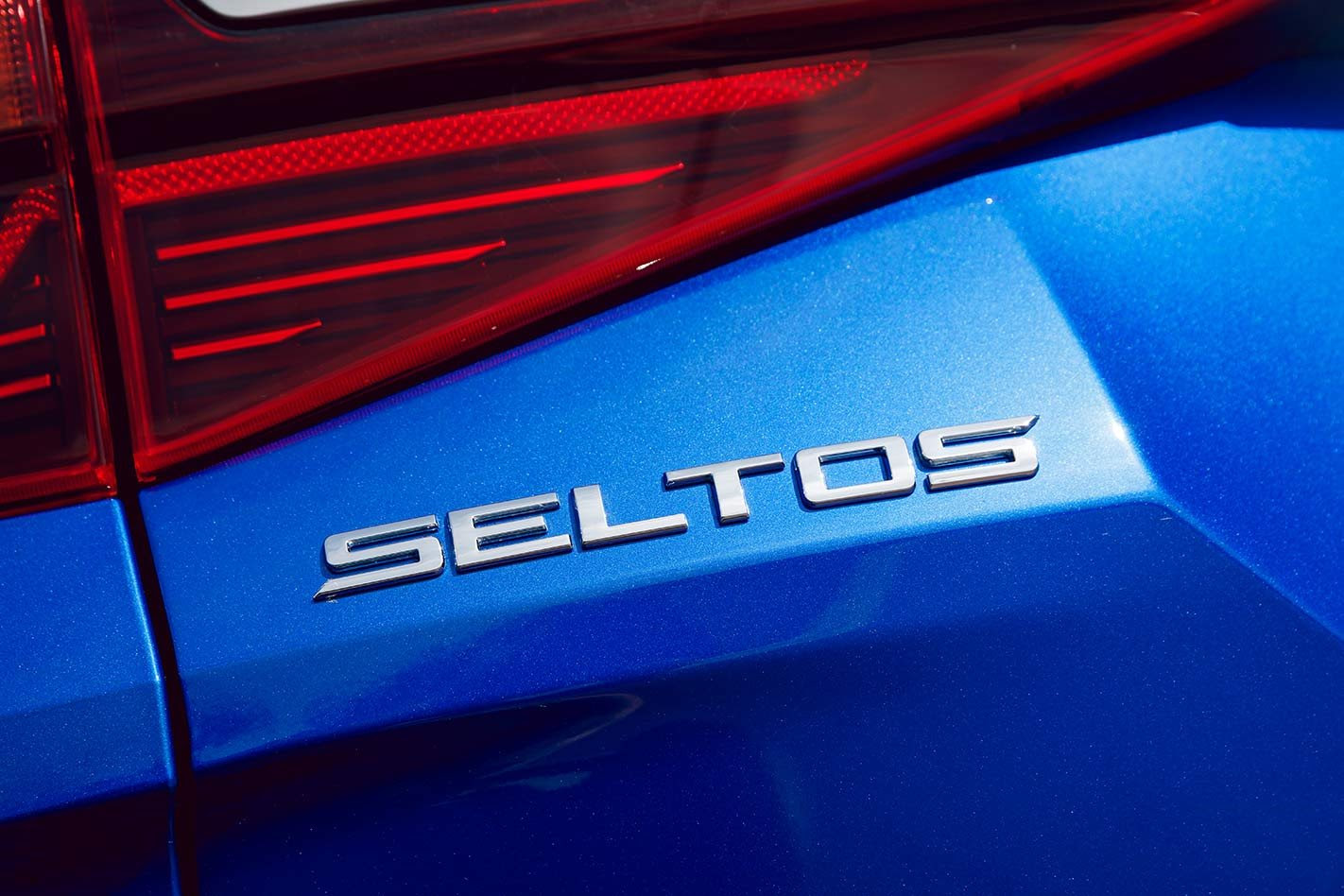 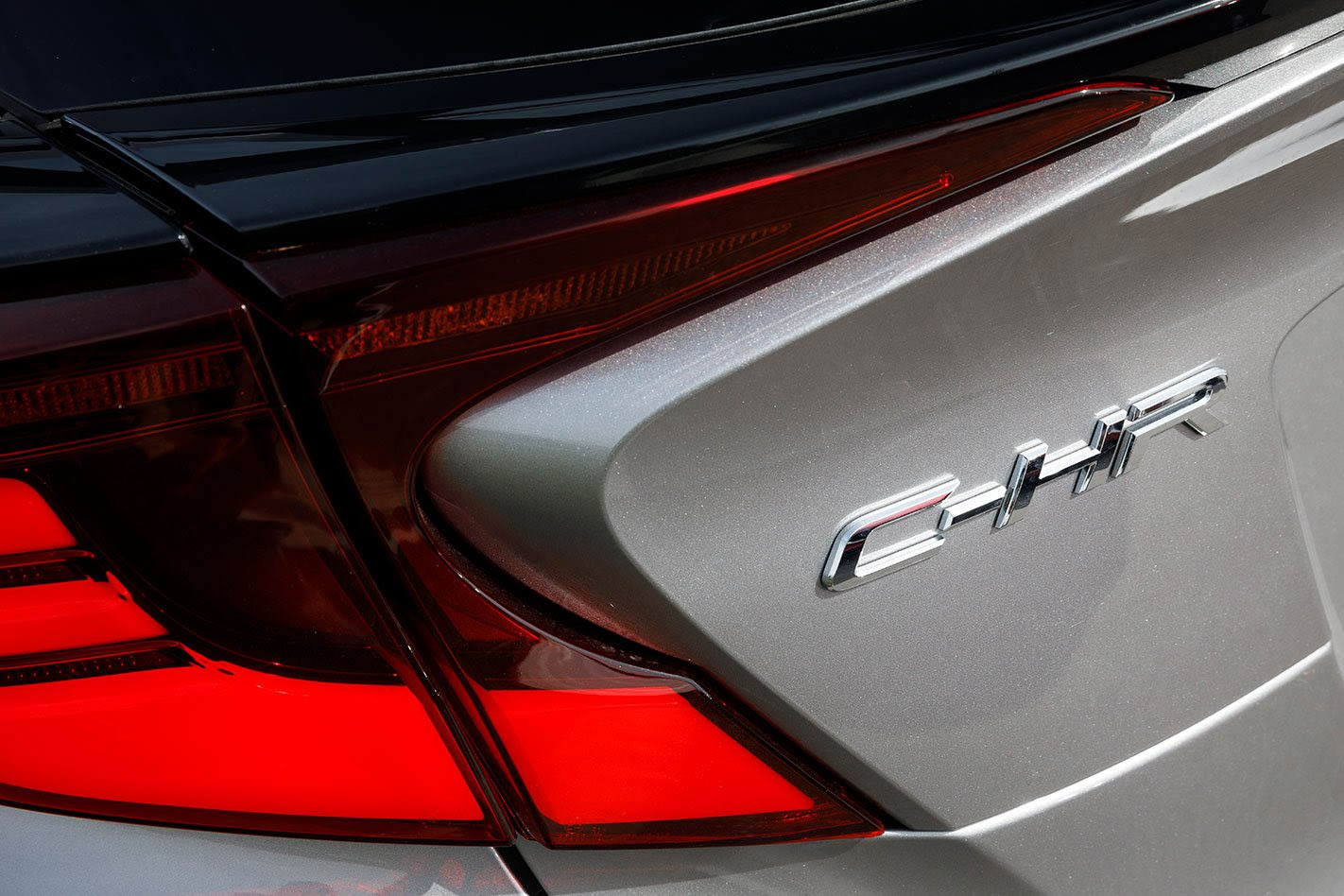