The 3 Series 6 cylinder – welcome back – you’ve been missed…

What’s in the garage?

We’re rubbish at suspense so, yes, it’s a BMW M340i xDrive. The Wheels garage has moved, albeit temporarily. The roller door we’re sliding up today is located in Gauteng province, South Africa. Or, to be more exact, the Kyalami Grand Prix circuit. This is wholly apt. BMW won its last F1 world title at this very circuit in 1983, Nelson Piquet just pipping Alain Prost to the driver’s crown in his Brabham-BMW BT52, the very first time a turbo car propelled an F1 driver to a world championship.

The turbocharged BMW we have here doesn’t quite make the same 630kW of the M12 engine that powered Piquet’s rocketship, but 285kW isn’t anything to be sniffed at in this M340i xDrive. More importantly, it’s the first time we get to sample a six-cylinder engine in the latest G20 3 Series. Factor in the grip and assurance of all-wheel drive and the flagship 3 – at least until the M3 appears in 2021 – has our full attention.

Thankfully it’s also a good deal more affordable than an M3 at $99,900, but that’s pretty much lineball with the BMW M2 Competition Pure, a model that’s shaping up to be one of the all-time great M cars. So is it worth going for something a bit bigger and more refined than the tearaway M2?

By most accepted measures 285kW is a decent slug of grunt. That’s 25kW more than the similarly priced Audi S4 and only 2kW shy of the Mercedes-AMG C43. These all-wheel drive, German, six-pot 3.0-litre sedans form a close triumvirate on paper, but the big-selling Mercedes is 10 grand more expensive, older and slower than the box-fresh Bimmer.

It’s helped by a hefty slug of torque. The full serving of 500Nm is available from between 1850 and 5000rpm thanks to the revised twin-scroll turbo, so you don’t get a torque curve so much as a mesa. And don’t think this is just an all-wheel drive carryover of the old 340i’s lump. This one packs 36kW more and feels far perkier.

The engine has a fairly purposeful growl towards the top end of the meter, and the exhaust has an addictively metallic zing as you wind the needle round the clock. The exhaust is a valve-controlled system, which duly amps up the pops and crackles when you switch into the sportier drive modes.

It’ll rev quite cleanly to 6800rpm, which is usually an exercise in futility in a turbocharged car, but the M340i will shift its 1670kg kerb weight with some elan, even in the upper registers. 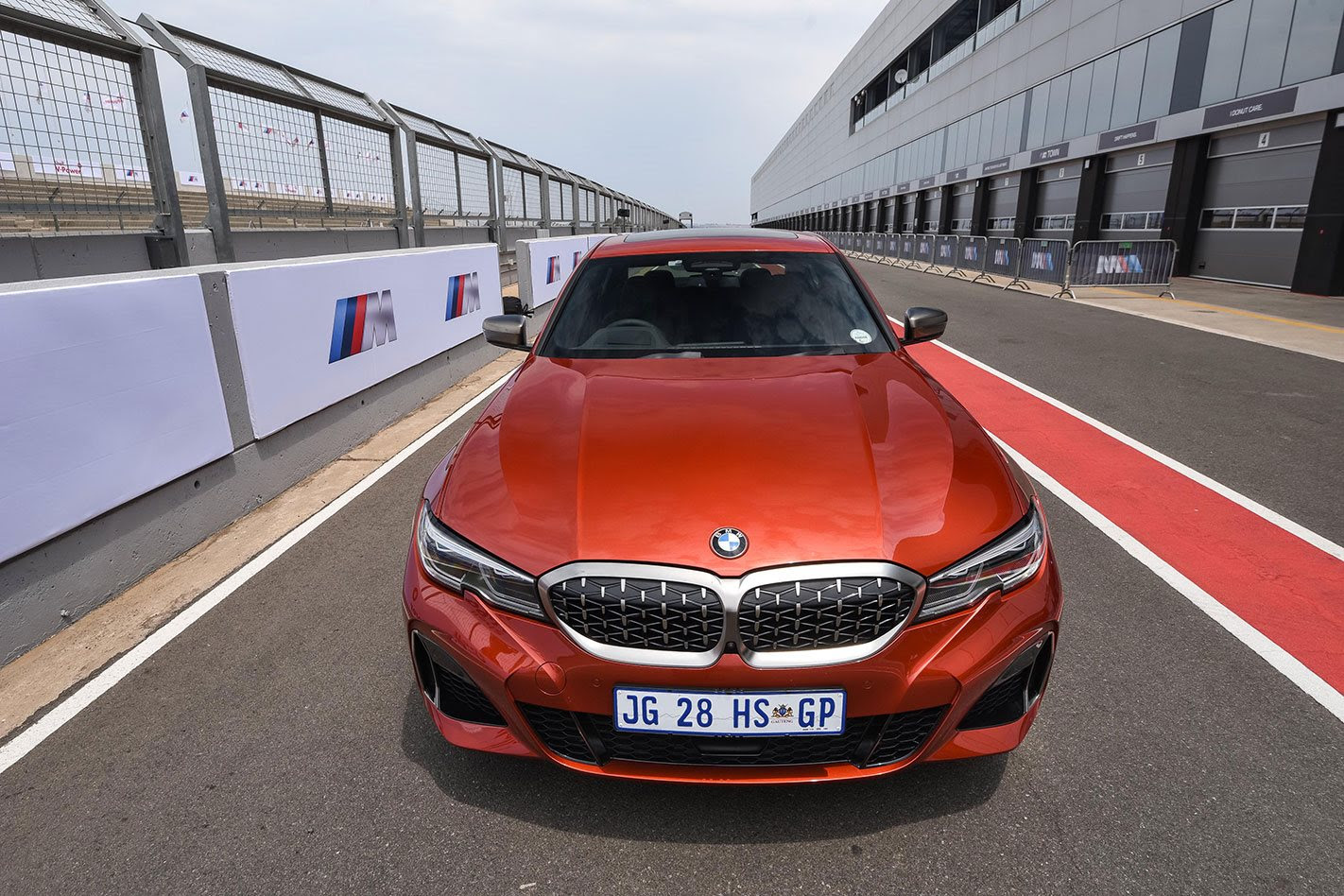 Despite the fact it’s quicker in the real world than an E92 M3 V8, the M340i xDrive never feels like a ‘proper’ M car. It just doesn’t have that unerring flintiness and attitude that distinguishes Garching’s peak performers. Is that necessarily a bad thing? No. In fact, for most of us, for most of the time, it makes it a better road car. I’m speculating slightly here, I’ll freely admit, as my drive was conducted on track. I took to bouncing the thing over every kerb in sight to get a gauge of its bump suppression qualities and didn’t come away disappointed. On surface changes, there’s occasionally a sharp vertical jolt through the cabin, which sometimes jars with the car’s otherwise polished demeanour.

The M340i xDrive rides on custom M Sport suspension, sitting 10mm lower than cooking 3 Series models. Our test car was fitted with the adaptive damping control, with four levels of stiffness via the Eco Pro, Comfort, Sport and Sport Plus modes.

The steering also feels a little more muted than you’d get in an M3, again no big demerit. It’s clean and accurate with no trace of kickback when the front tyres are asked to deploy torque mid corner. The variable sports steering features Servotronic assistance and can feel if not vague, then a little rounded in its responses on-centre. You’ll certainly value this quality on longer drives, and the long gearing in eighth gives this car genuine legs once you’ve broken clear of the city.

A fully variable electronic differential lock on the rear axle helps keep things neat when you’re trying to see exactly how much drive you can send to the rear boots. You can’t dial all the power to the rear via a menu, as you can in the latest M5, but in the Sport and Sport+ settings, the M340i becomes increasingly rear-biased.

Body control is excellent, particularly in dive and squat responses. The brakes (348mm/four-pot up front and 345mm/single-piston units at the rear) do a manful job until they don’t which, on a circuit like Kyalami, is understandable. This isn’t a trackday car and the stoppers are right-sized for fast road use.

The M340i xDrive is offered in the Australian market solely as a four-door sedan, although we’d love to see the Touring wagon make its way down under. Nevertheless, the three-box shape is practical and well finished.

The boot’s a decent size at 480 litres (partly thanks to run-flat tyres) and the longer wheelbase of this G20 generation remedies a perennial 3 Series Achilles heel; rear legroom. It’s actually fairly spacious in the back and the roof doesn’t impinge sharply on the coifs of taller passengers.

The 3 Series has often been somewhat de-contented in terms of tech compared to its bigger siblings, but the G20 car again addresses this. That’s why it has performed so well in previous Wheels group tests: it’s as easy to live with as it is to drive.

Having to pay a subscription to access Apple CarPlay is a black mark, but otherwise the infotainment setup is very smart. The iDrive 7.0 control system has evolved into something with genuinely thoughtful functionality and if you don’t fancy twirling and nudging the rotary controller, you can instead say ‘Hey BMW’ and access around a thousand voice activated functions. Unfortunately ‘Show me the fastest line around Kyalami’ wasn’t one of them.

There’s an automatic reverse parking system, a gesture control system that’s as overthought and underutilised as any other gesture control system, lane-keep assist and an app that allows you to use your smartphone as a car key. Given the number of times I let my phone’s battery go flat, I’d probably only ever use that as a backup in case I physically lost the key.

The dash features a curved 10.25-inch centre screen and a fully digital dial pack as well as one of the best head-up displays we’ve seen. Fit and finish is generally excellent, with cool aluminium shift paddles, supportive Alcantara/Sensatec seats and decent oddments stowage. Some of the interior trims can be a little questionable, so choose wisely when specifying the car. The chubby steering wheel has become almost a BMW trademark, but we’d prefer a more delicate, thinner rim. 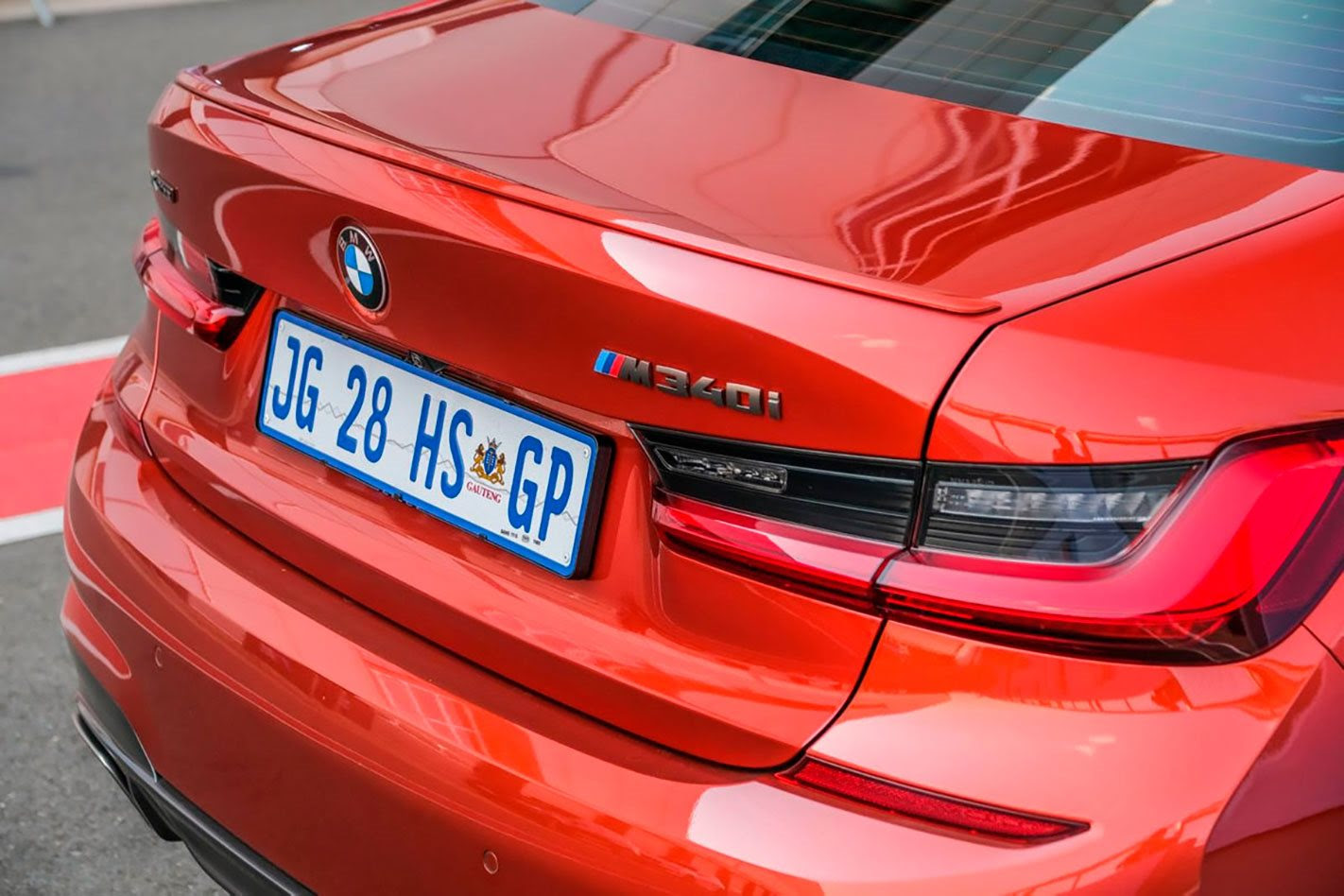 The BMW M340i xDrive is definitely a grower. Its charms are subtle, muted by a certain polished discretion, but it’s hard to argue with this car’s sheer versatility. It basically does the lot. It’s quick, slick, handles crisply and is even respectably practical. Those who value a more overt aesthetic might find it a little underdone, but the M340i targets those who might well have grown out of an M car and require something that’s not perpetually enraged. In the past, BMW might have lost those sales to Mercedes-Benz or Audi. Alpina, even. The M340i xDrive teases the 3 Series into a new, and potentially lucrative, niche. It’s a gem. Now sell us a wagon.