It’s over-size and about to be over here, so could BMW’s flagship SUV be your new luxo seven-seater family hauler? Ash Westerman delivers the Wheels verdict

WHY ARE WE DRIVING IT?

BMW’s USA-based launch program saw waves of journalists driving a fleet of X7s from Florida to Palm Springs in California over six weeks. Wheels was given the 550km leg from Baton Rouge in Louisiana to Houston in Texas. No alligators were harmed in the making of this review, but a couple of racoons were not so fortunate. 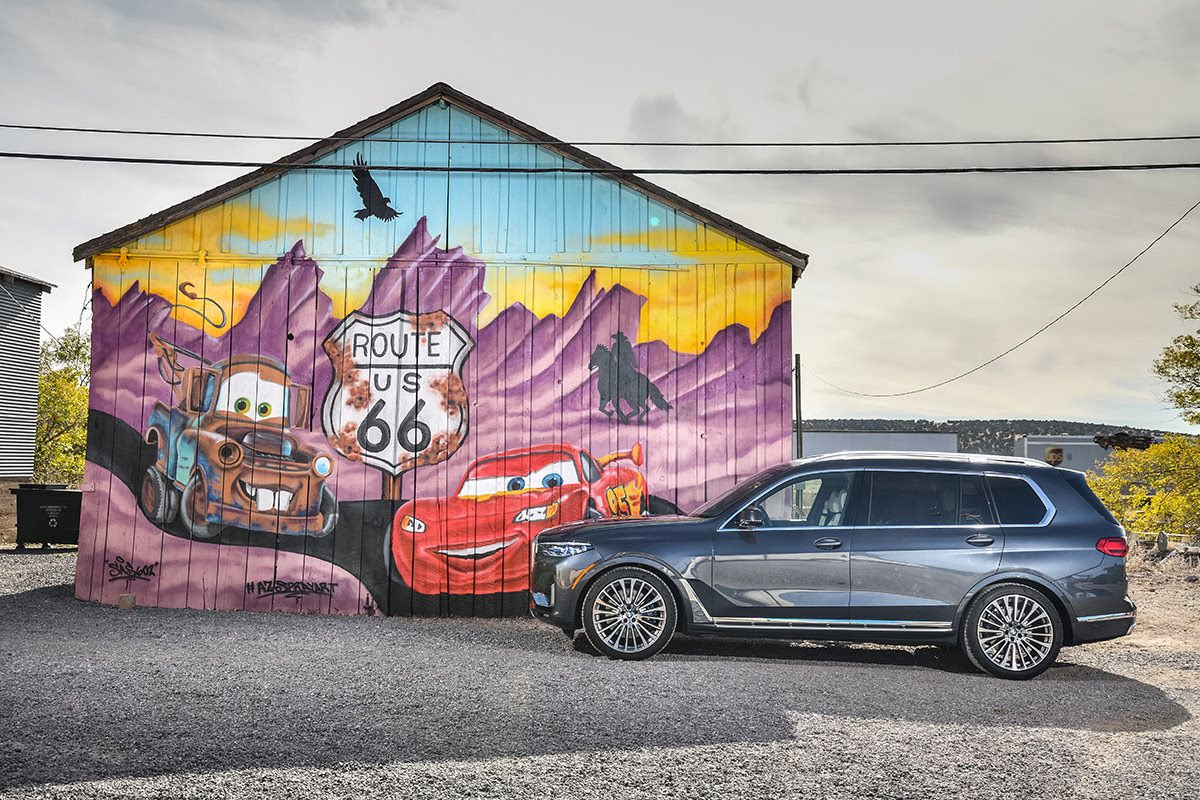 Whoever coined the adage about death and taxes being the only certainties in life clearly didn’t have much of a clue about BMW’s SUV range. With a line-up currently spanning X1 to X6, the arrival of a flagship X7, to give BMW a rival for Mercedes-Benz’s GLS and L-R’s Range Rover (and a larger, roomier alternative to Audi’s not exactly diminutive Q7), was a certainty waiting to happen.

You’ll need to crane your neck to take in all of the new model’s hulking exterior. At 5151mm, it’s around 230mm longer than the X5, and rides on a wheelbase stretched by 130mm. Make up your own mind about the styling, but its sheer presence, especially on the 22-inch wheels fitted to all the test cars at the launch in the USA, is indisputable. And aerospace enthusiasts may be interested to learn that NASA has confirmed that yes, the huge double-kidney grille can be seen from beyond the Earth’s atmosphere. 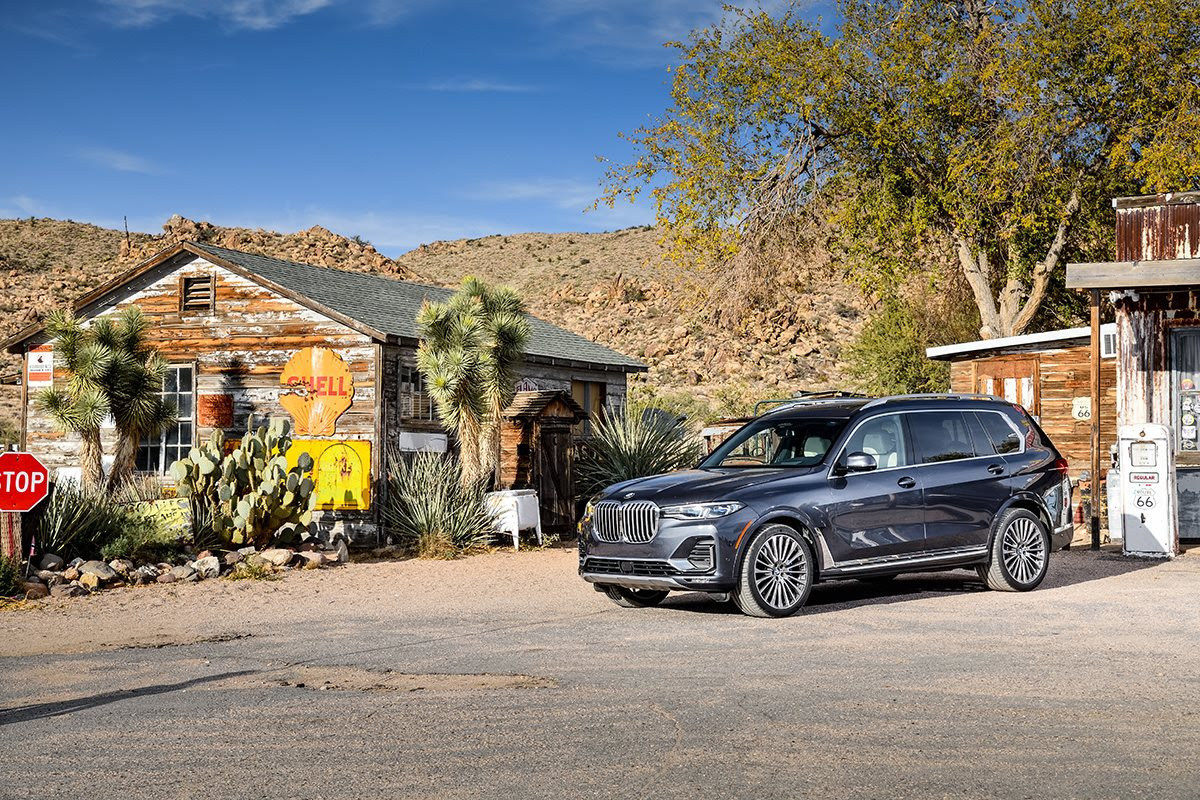 Don’t, however, be misled by the 7 in the nomenclature, as there’s really nothing specific to the 7 Series sedan that has found its way into X7. Instead, it shares some component sets with X5, but according to X7 project manager Dr. Jörg Wunder, around 60 percent of the underpinnings are new and specific to X7. Included in that is the self-levelling air suspension and a whopping 80mm of adjustable ride height. 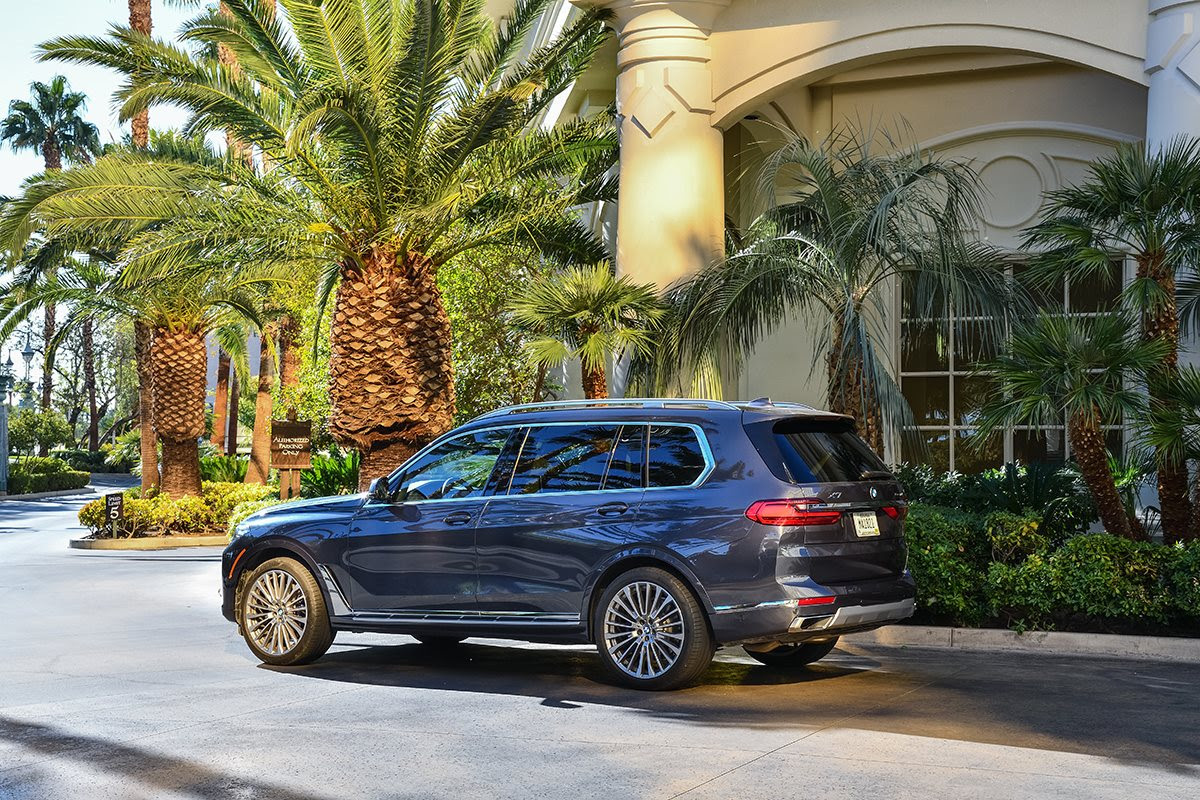 This latter engine employs two variable-vane turbochargers combined with two conventional huffers to extract those remarkable numbers, which are enough to hustle the circa-2500kg SUV from 0-100km/h in just 5.4 seconds.

Probably more relevant to most customers, though, will be the packaging of X7, given it’s pitched at those for whom the optional third-row seat in an X5 is just too squeezy. The first point to note is that electric adjustment for all seats is standard, and there are buttons specifically assigned to raise or lower both middle and third rows in one hit, making it simple to configure the cabin into 2120-litre hauler mode. Or, if you want to lower the third row to expand luggage capacity from 360 litres to 750 litres, sensors first check to ensure the adjustable second row isn’t too far rearward, and adjusts it if necessary. 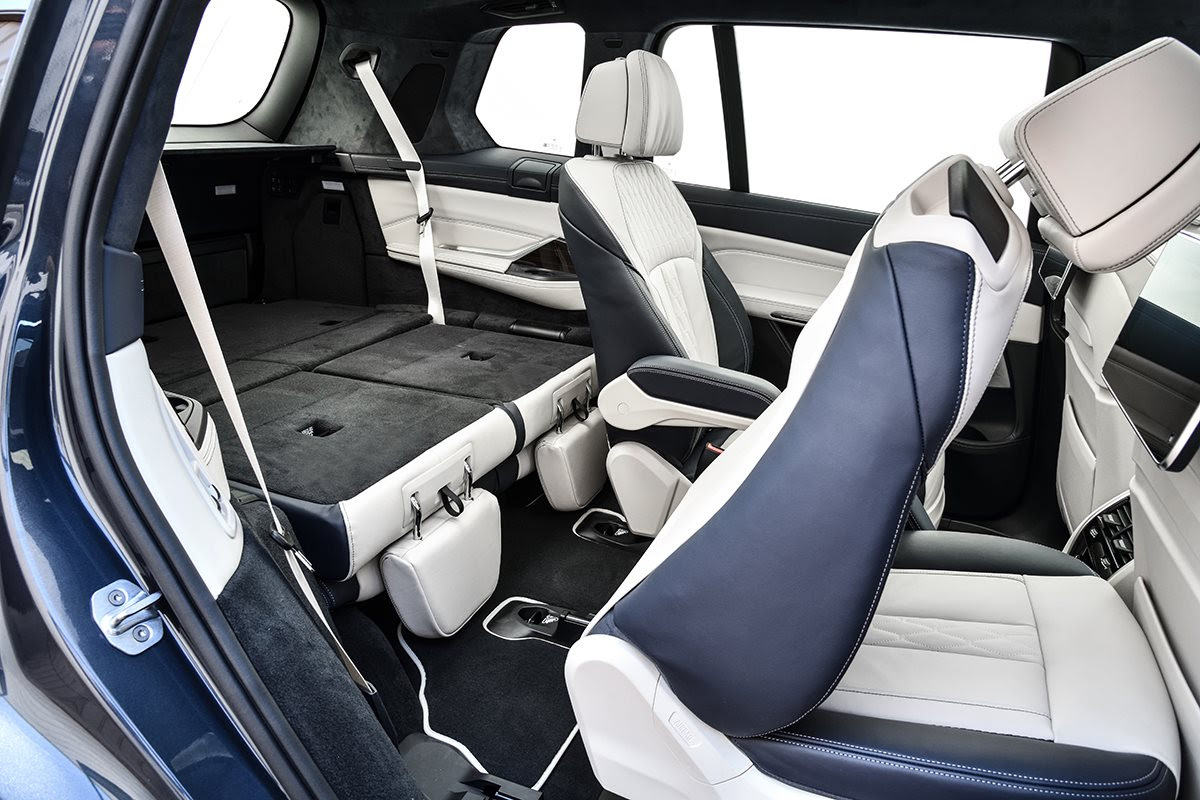 That’s good news. Less great is the time it takes to access the third row – 11 whirring seconds. Once back there, though, passengers can appreciate their own (optional) climate-control system, as well as USB ports and cupholders. A glass roof panel is also available, easing life for claustrophobes.

As for legroom, that really depends on the position of the second row. If it’s in its most rearward position, things are tight for average-sized adults. But if second-row passengers concede around 30-40mm, suddenly the third row becomes perfectly acceptable for adults, or very kid-friendly.

As for the rest of the interior, the test cars were highly specced with extended leather, Alcantara roof linings and sublime, multi-speaker B&W audio, but even without that stuff, the superb front seats, digital instruments, head-up display and 12.3-inch multimedia screen all create an impression of lavish luxe. 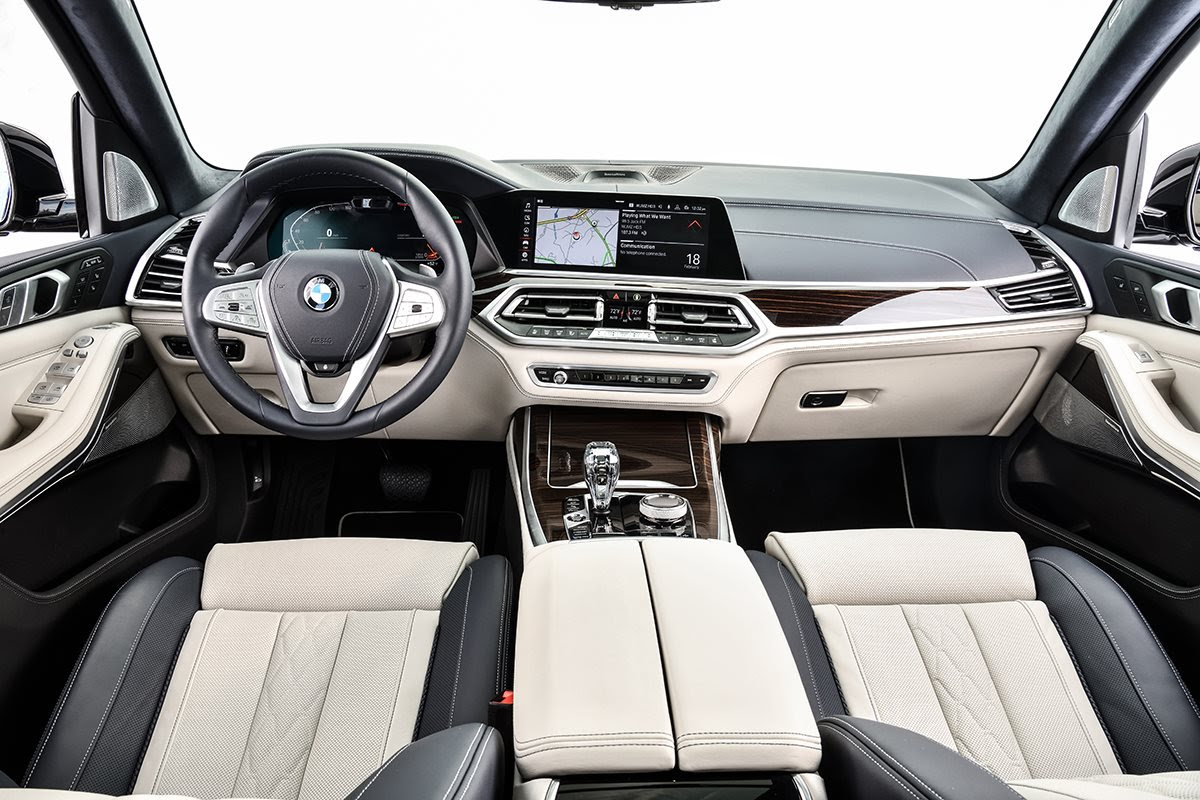 I ask Dr Wunder what was the biggest challenge faced by his team in creating the X7. “To make it still feel and drive like a BMW,” he says. “Despite the size and weight, it still had to have an identifiable BMW character.”

On first impressions, I’m unsure if he’s nailed it. The steering isn’t quick, at 2.8 turns lock-to-lock, and its change in weighting as speed rises is too obvious for my taste. The air suspension gives a wafting, pillowy ride, but is calibrated with quite a slow rebound damping in Comfort mode, so it all feels a bit languid and not especially alert.

The Sport mode goes a fair way to readdressing this without ruining the ride, but the reality is that managing this much weight and the vast unsprung mass of those 22-inch wheels means the X7 much prefers you to coax it into corners then exploit the lateral grip and power-down ability. Even with the addition of active anti-roll and rear-wheel steering, it doesn’t really dig being flung around. Given Aussies’ love of AMGs and performance variants generally, the M50d may be more to our tastes. Its firmer chassis tune, faster steering response, limited-slip diff and fruitier exhaust note has the potential to change the X7’s character significantly.

As it stands, BMW’s flagship SUV feels tailored to please mostly American and Chinese customers, rather than having a real crack at resetting dynamic benchmarks in the large-SUV segment. Generous accommodation for seven, loads of luxury appointments and a calm, compliant ride appear to be the primary targets of the X7, and first impressions are that it mostly nails them. The flagship M50d, which we didn’t drive but is coming to Australia, has the potential to be a far more connected, sporting driving experience, despite the broader market nose-turning towards oil-burners.