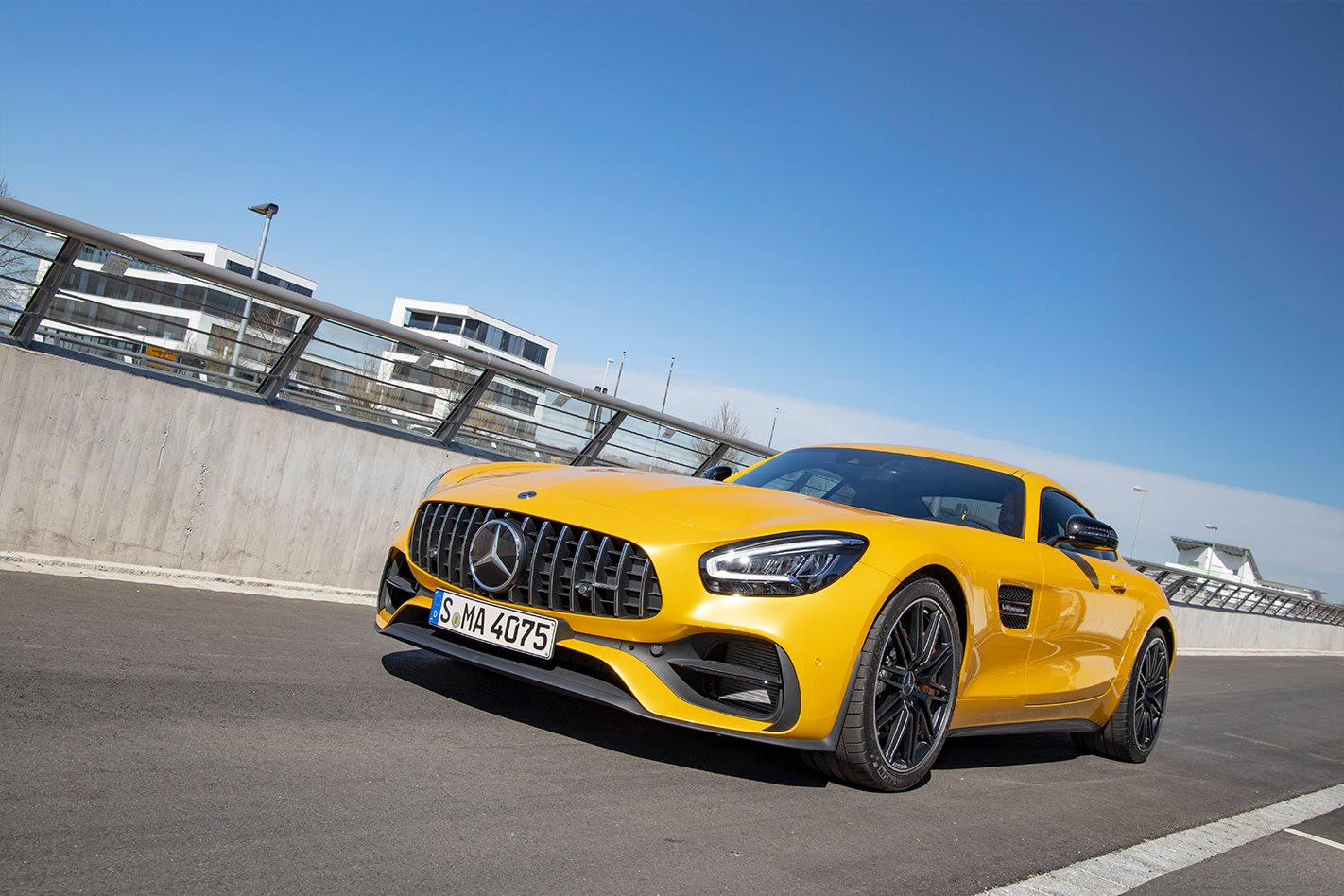 The AMG GT slides into 2019 with a slicker presentation but the dynamics haven’t stepped forward quite so markedly. For those who like a loud and slightly brash coupe or cabrio, that won’t matter. If you really extend the latest GT you’ll find additional layers of talent there, but that will probably best be reserved for exploration on a circuit. We still love it, but this big GT won’t be for everyone

WHAT IS THE MERCEDES-AMG GT?

AMG’s flagship coupe line has been a huge success in Australia since its introduction in 2015. But four years is a long time, especially in this corner of the market where customers are attracted to new and shiny. The brains trust at Affalterbach has given the car a keenly targeted makeover. 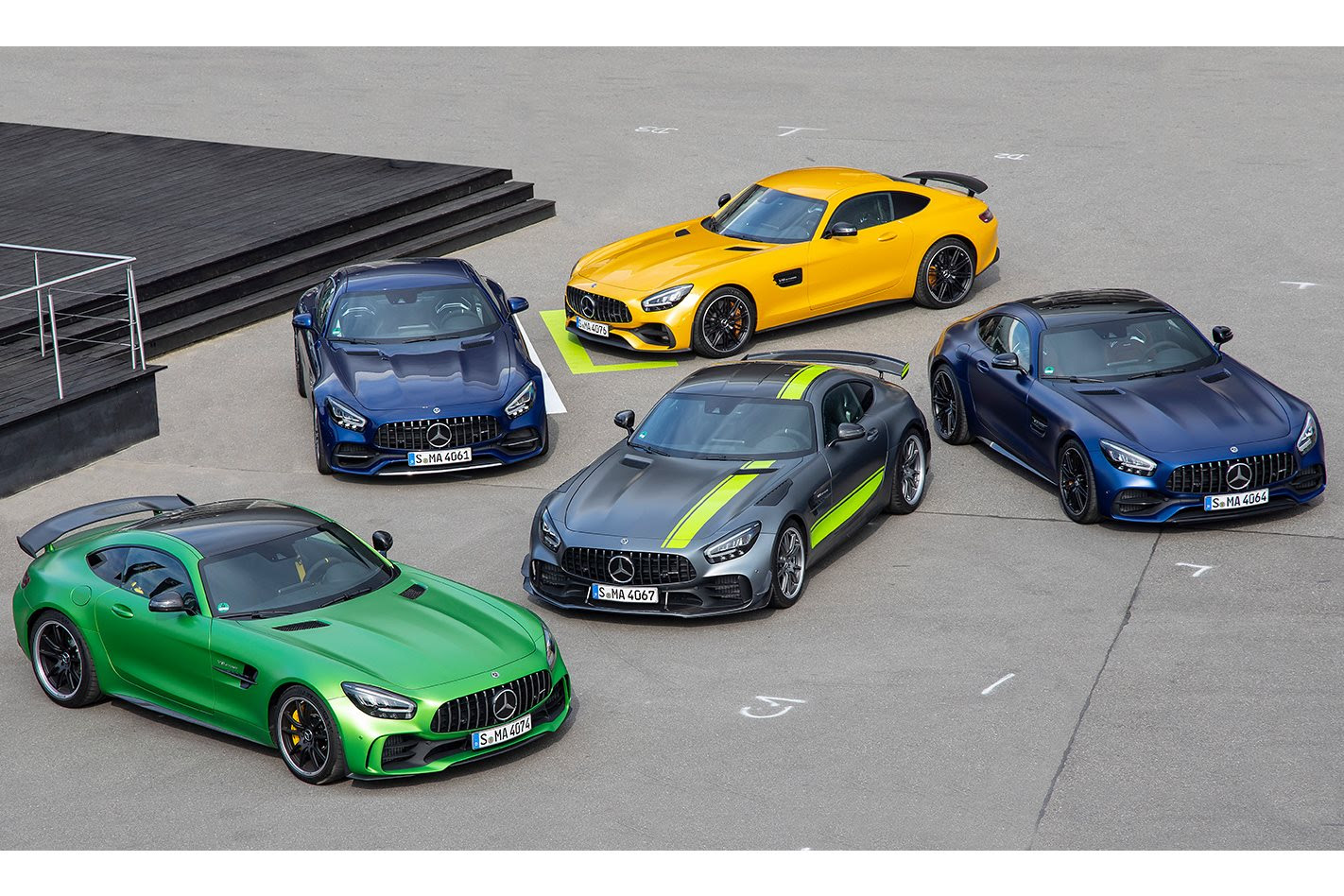 Mercedes dangled the carrot of an AMG GT drive while we were in Germany to test the CLA, so it seemed churlish not to take them up on the offer. It may ‘only’ be a facelift, but this is no grille and headlights nip and tuck. There’s a lot more to it than that. 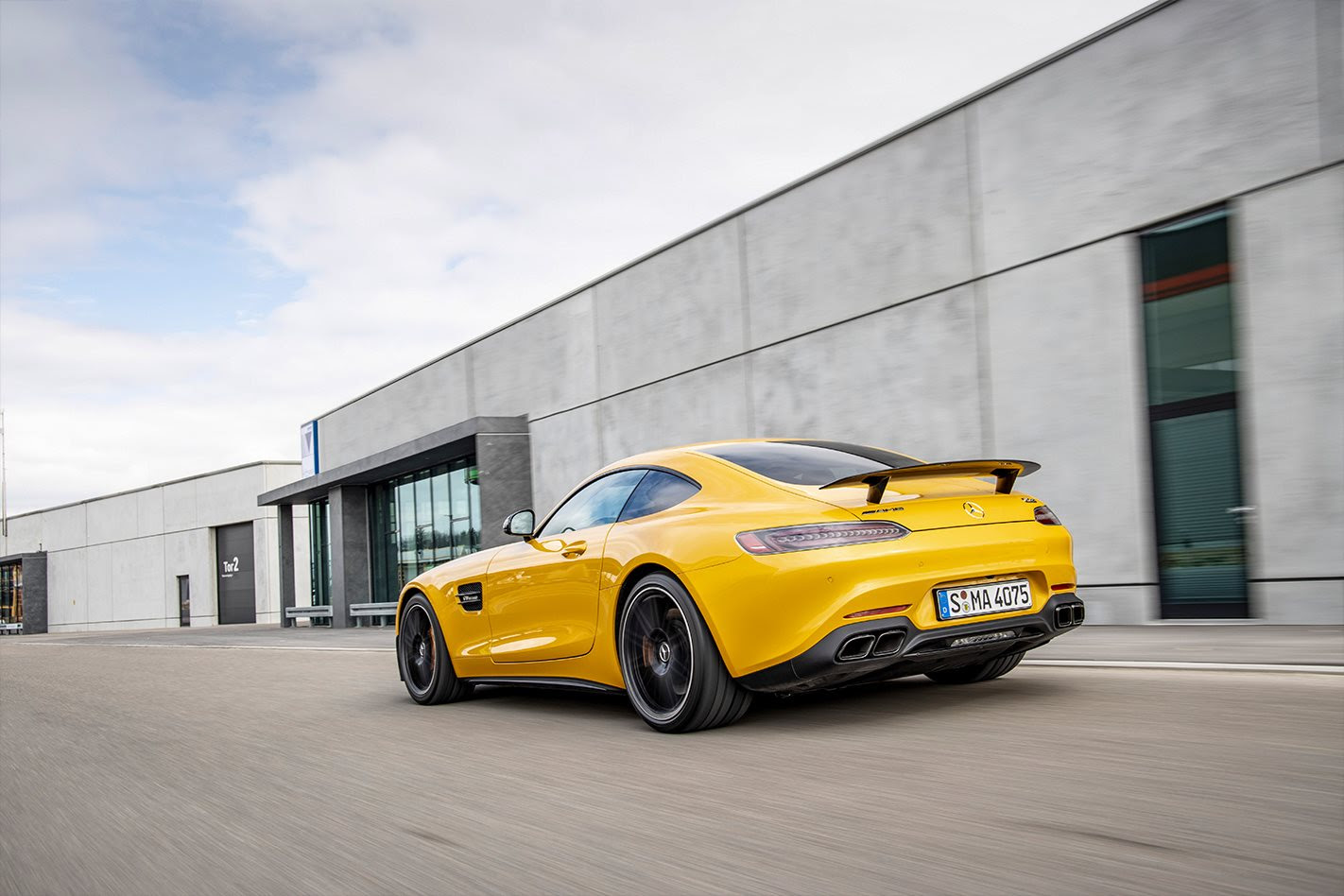 Let’s start by saying that the Mercedes-AMG GT is not coming to Australia. The Merc marketing people from Mulgrave have taken a look at it and put the red pen through it. Not enough demand, they say. So no 350kW 4.0-litre V8 coupe or cabriolets for us. Ample recompense comes with the fact that we’ve got the green light for the 384kW AMG GT S coupe, 410kW AMG GT C coupe and cabrio, and the ballistic 430kW AMG GT R coupe range-topper.

The GT range that is set to ship to Australia has been given a well-judged reworking for 2019. Greater athleticism, more aggressive styling and a better-quality, more feature-rich interior to bring it in line with the four-door extension to the GT line were the goals, and at least two of them have been achieved. Being a sports coupe, the dynamics are key. The GT now gets the AMG Dynamics system that we first saw on the C63 S coupe. This augments the electronic smarts of the steering and stability control to offer keen drivers more options and the choice between stability and agility. In other words, you can now taper off the control systems with real finesse. Like the C63, AMG Dynamics offers “Basic”, “Advanced”, “Pro” and “Master” modes, and the GT R gets the clever nine-point traction control switch.

We had the opportunity to drive on track at Hockenheim and the “Master” mode is uncannily good, making the steering sharp without feeling nervous and allowing heaps of mid-corner adjustability. What initially feels a bit of a truck-like point-and-squirt hot rod in fact delivers enormous high-speed stability. Downforce also has something to do with that. 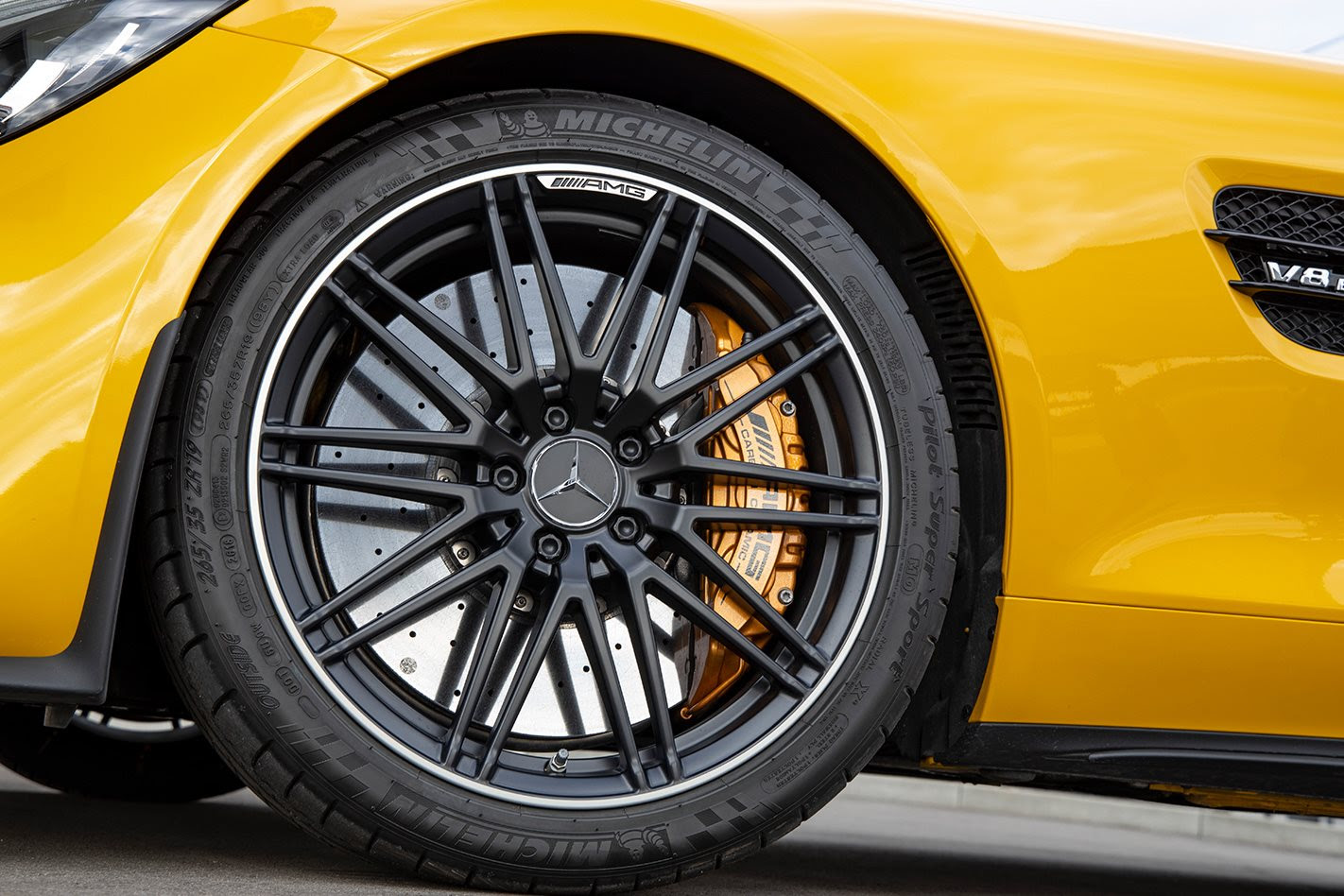 Unfortunately the car we were driving on the F1 circuit is another that won’t be coming to Australia. The AMG GT R Pro is an even more focused track-day special with an aggressive aero package delivering an additional 99kg of downforce at 250km/h, but if the rumours are correct, something even more extreme is in the works for AMG GT customers with patience and deep pockets.

When you’re not leaping the kerbs on the Sachskurve, the GT can still feel a big unit. Unlike a 911, you’ll start feeling very wary of width restrictors, multistorey car parks and drive-thru lanes. You still sit way back, almost on the rear axle, with that enormous prow stretching ahead. It’s undoubtedly suffused with a giant dose of drama ¬ especially in the Green Hell Magno paint of our GT R test car – but agility is not the first attribute that comes to mind in town. Go beyond that initial impression and really drive the thing and it has a genuinely talented chassis with superb body control, well-telegraphed feedback and a meaty steering system. The harder you drive, the better it gets. 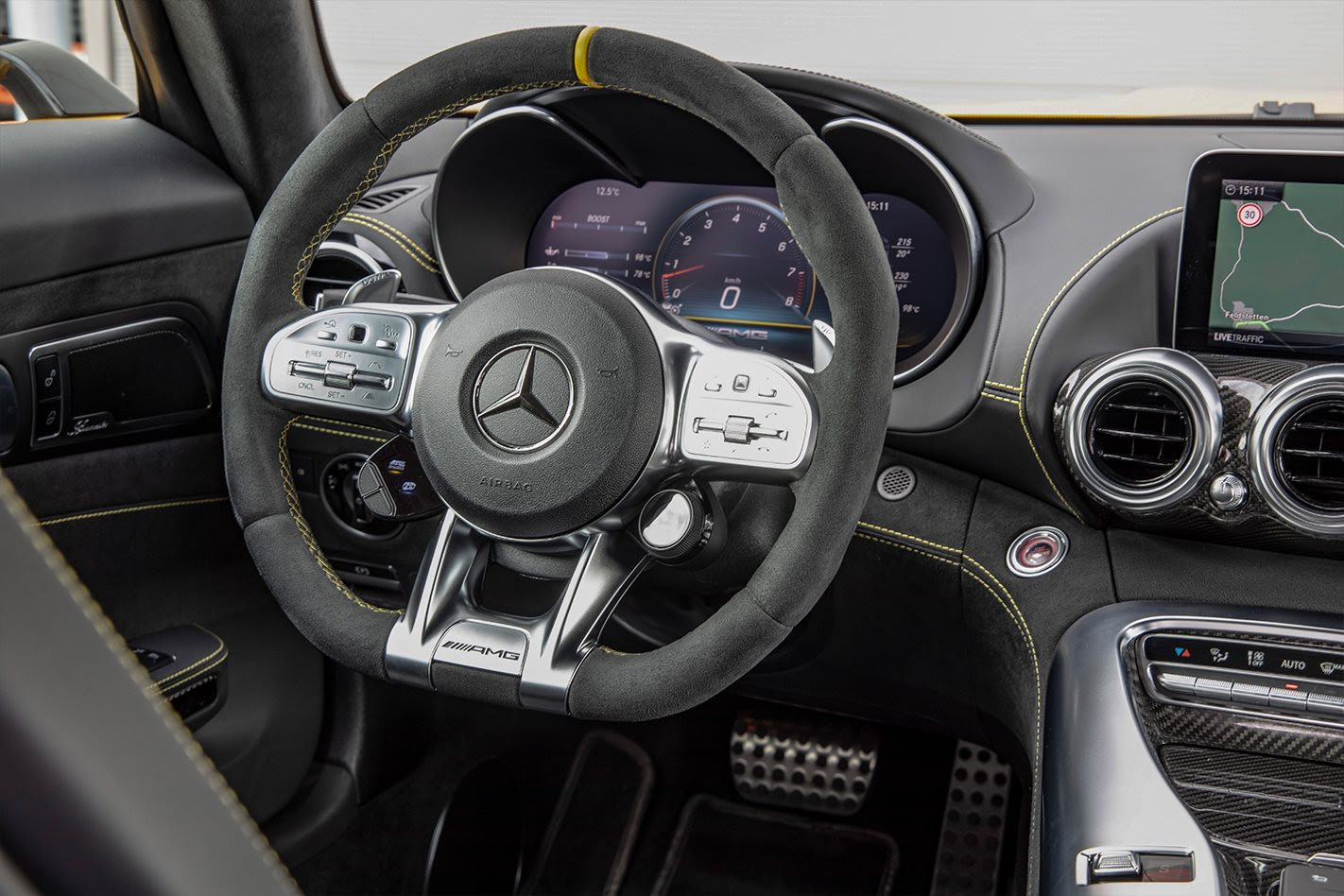 The design tweaks are relatively subtle, but help modernise what was already a handsome car. The daytime running lights now have a different LED signature, there are trapezoidal exhaust finishers, black background rear LEDS and a more extrovert diffuser on the GT S and GT C models, while revised alloy wheels in black and titanium finishes are now offered.

Drop inside the snug cabin and you’ll still be separated from your passenger by a vast transmission tunnel. You’ll still have to claw the GT into gear T-Rex style with a drive selector that’s set way too far back on the tunnel, but the ergonomics are otherwise good. There’s decent headroom in the coupe and, with roof in place, cabrio, a decent wheel-to-pedal alignment and even decent visibility in the mirrors. A new Parktronic system of sensors and cameras takes some of the anxiety out of sliding over two metres of width into a tight spot.

That centre stack is now indented with a series of TFT display buttons which mirror the functions on colour display buttons on the new steering wheel. There’s also a round mode selector that hangs off the right-hand spoke, allowing easy access to the six drive modes (Slippery, Comfort, Sport, Sport+, Individual and Race). The clocks are now a fully digital 12.3-inch pane which can be configured through three modes – Classic, Sporty and Supersport – the latter featuring shift lights for the seven-speed ‘box. In the middle of the dash is a 10.25-inch widescreen display that manages infotainment duties. 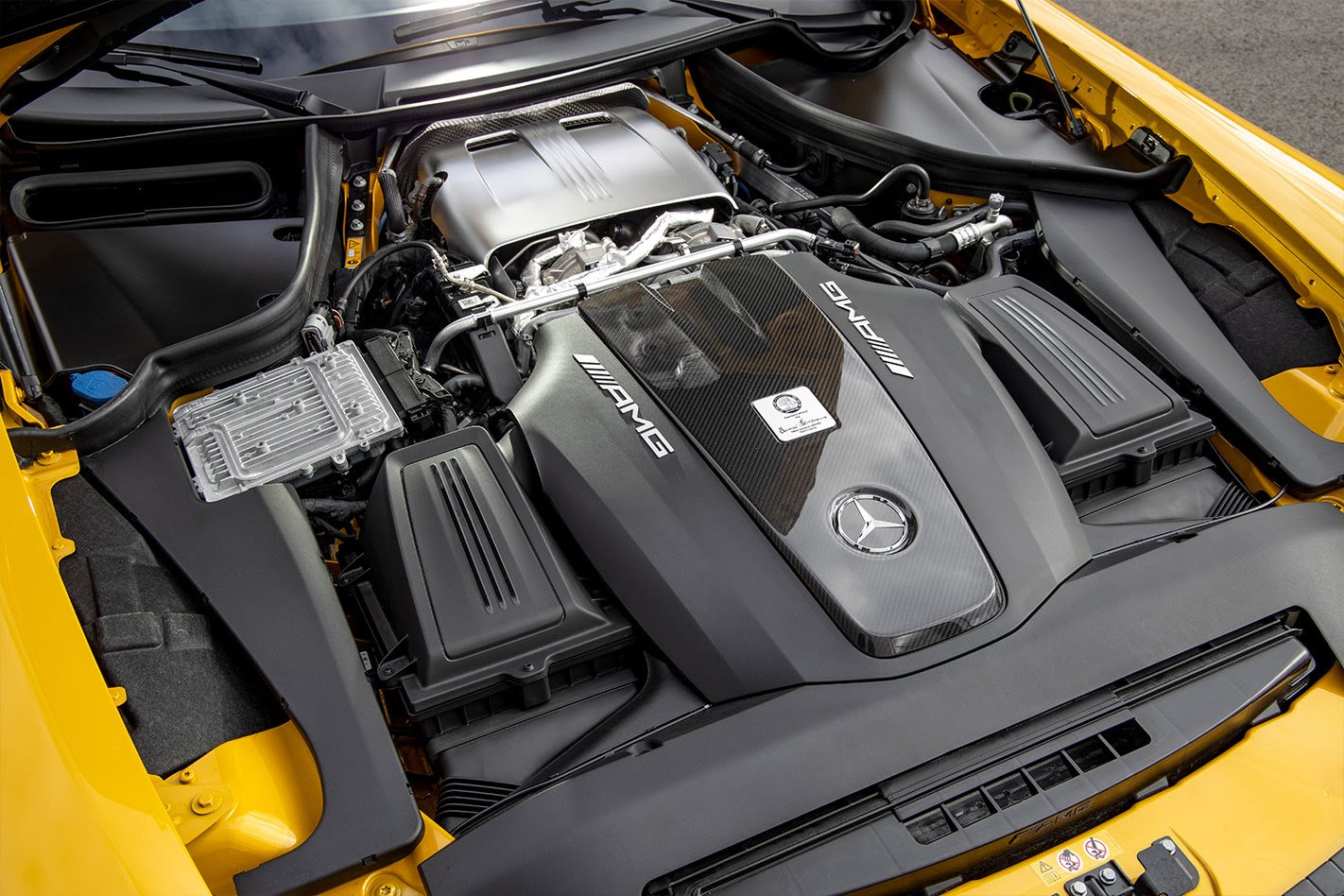 In fairness, the AMG GT range didn’t need a lot done to keep it at the forefront of customers’ attention. The changes improve certain elements of its functionality but don’t make significant changes to its dynamic character. For better or for worse, it’s largely business as usual there.