Which one is for You?

There was a time, in the not-so-distant past, where small cars from the premium brands could justify their dizzying prices because of not just their badges, but clear superiority in terms of design sophistication, perceived quality, higher grade materials, and extra safety and convenience features.

But that was then. In 2019 we’re dealing with a very different paradigm; the arrival of the new, fourth-generation Mazda 3, and the steadily refined VW Golf, are two small cars that give away little to much higher priced offerings in terms of those all-important attributes that can be summarised (perhaps a little awkwardly) as ‘premiumness’. This pair bristle with quality surfaces, seductive instrumentation, long standard equipment lists, and painstaking attention to detail. Separating their individual attributes isn’t difficult, but declaring a clear winner? That will prove not so simple. But let’s give it go.

We’ll kick off with the Mazda 3, as it has been a regular podium seller since bursting on the scene in 2004, and the series from Japan is today deeply ensconced in our national streetscape. Toyota’s Corolla might pip it for sheer sales, but more private buyers choose the diminutive Mazda, and – as a show of pride in their purchases – in higher model grades too. Aussies have been won over with high quality, driveability, efficiency, affordability, and – vitally – after-sales care. Consistency has been the key to the Mazda’s success. 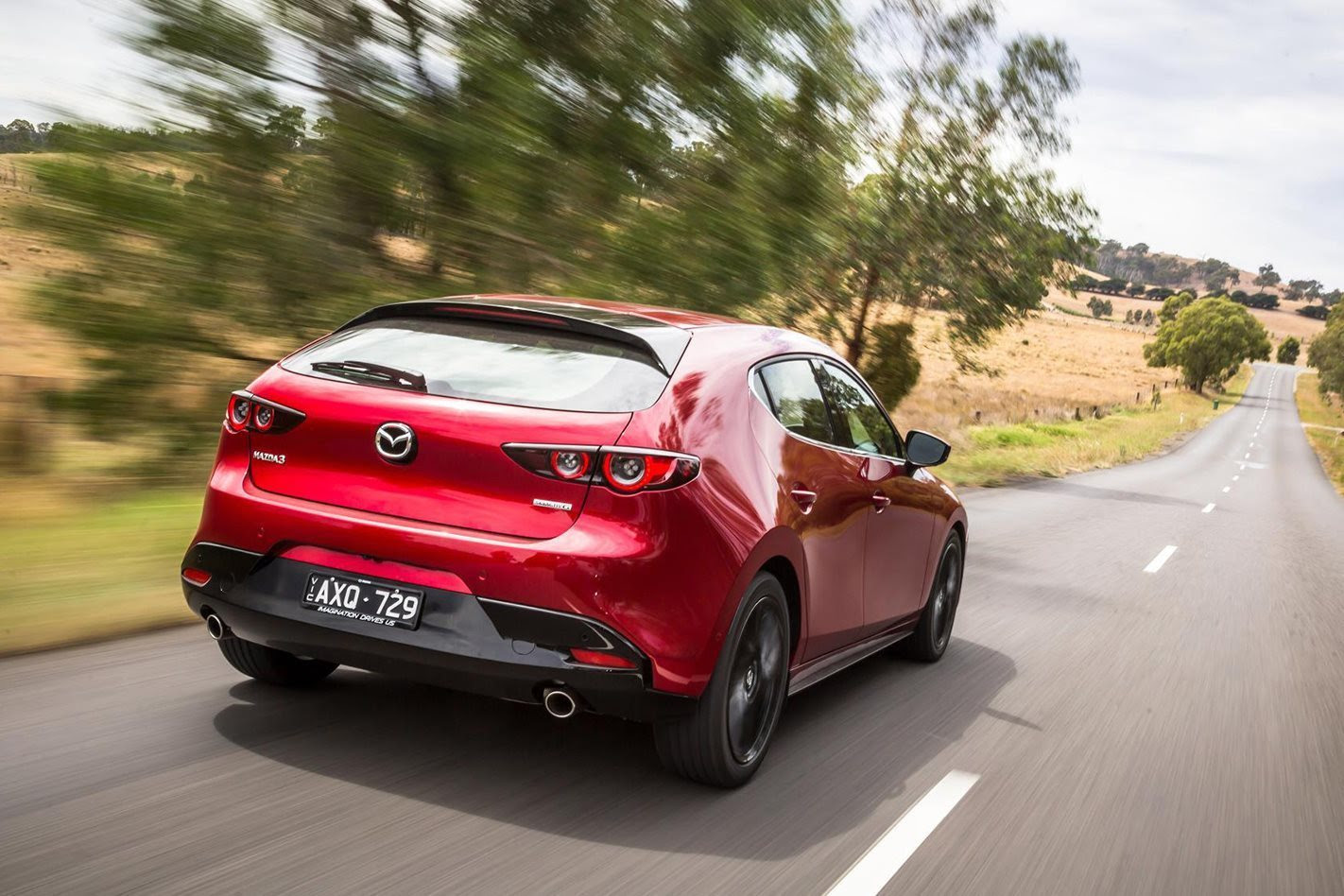 While not strictly all-new due to carryover powertrains and some other platform components, the striking fourth-gen 3 builds on such virtues with bolder yet cleaner styling inside and out, a stronger body, longer wheelbase, substantially more upmarket fittings, better comfort, greater safety, improved dynamics (despite ditching a multi-link rear suspension layout for more practical torsion-beam arrangement) and an obsessive drive to cull noise/vibration/harshness (NVH) pathways. The latter has long been a series bugbear.

Result? Mazda is so confident this BP-series redesign is the finest C-segment small car going, it has bravely pushed prices firmly into Volkswagen Golf territory. Here we’ve plumped for the richest of the six 3 model grades available. The range-topping G25 Astina from $37,990 (plus on-roads) is powered by a normally aspirated engine – a newly overhauled, 139kW/252Nm, 2.5-litre four-cylinder unit, driving the front wheels via the same six-speed automatic. Along with the usual luxuries like leather, powered and heated front seats, paddle shifters, sunroof, sat-nav, rear camera, smartphone-mirroring multimedia, DAB radio, adaptive LED headlights and driver-assist safety tech like AEB, the latest Astina ushers in adaptive cruise control with stop and go, 360-degree surround-view vision, front cross-traffic alert and projector head up display. The only option on our example here is metallic paint, pushing the price to $38,485 (+ORC).

The Golf we chose to challenge the new 3 is the mid-range 110TSI Highline guise from $36,490. Released in 2013 – though a thorough ‘Mk 7.5’ facelift brought worthwhile updates in 2017 – the former Wheels COTY winner has famously seen off most challengers since. Packing a 110kW/250Nm 1.4-litre four-cylinder turbo engine with seven-speed dual-clutch transmission, our Volkswagen mostly mirrors the Mazda’s spec, though with a $2300 Sound/Vision pack (bringing fully digital and customisable instrumentation, upgraded sat-nav and better audio) and $500 metallic paint, buyers are looking at $39,290. 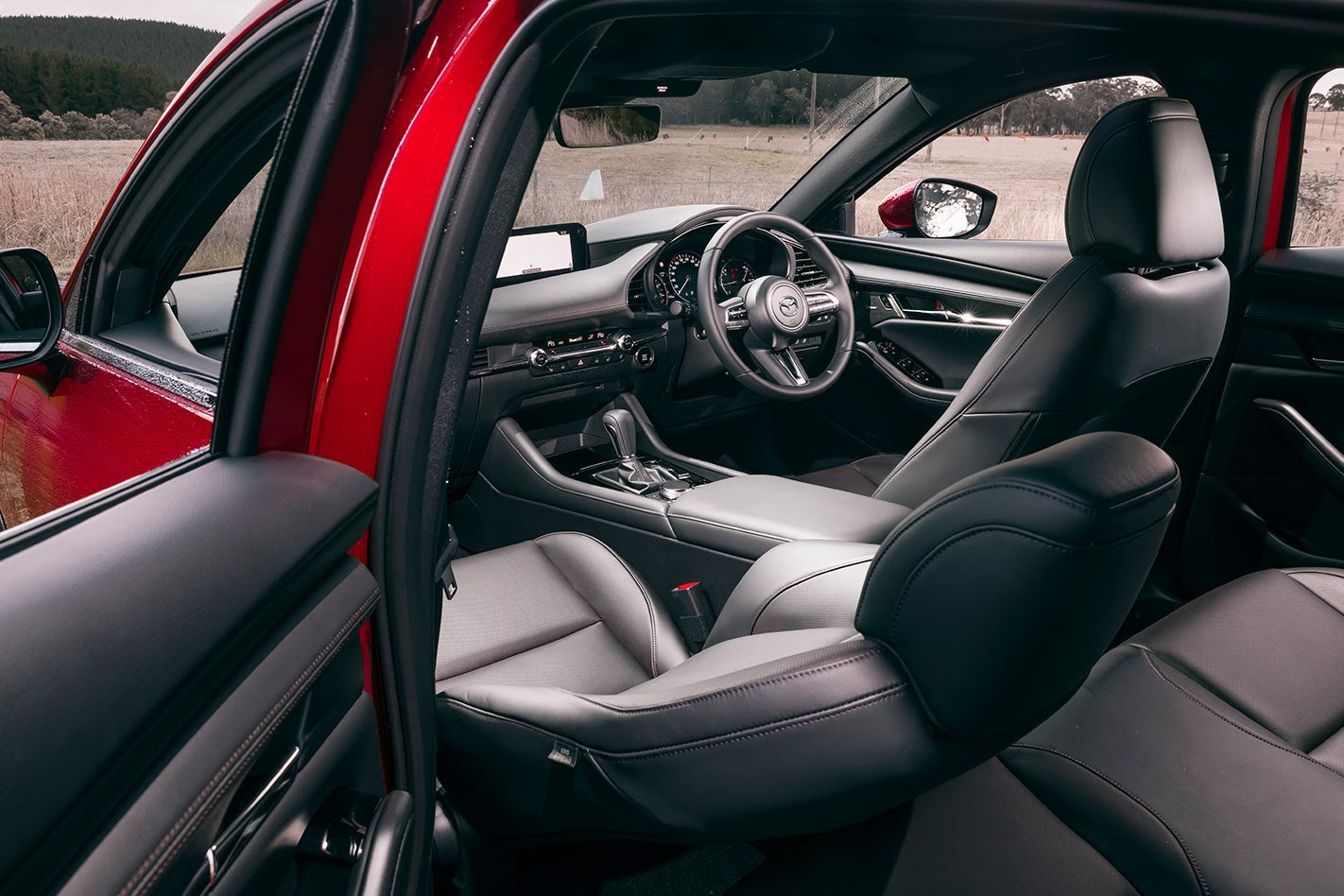 Additionally, the VW comes with the luxury of space. Entry and egress is easier than the Mazda, material quality remains unsurpassed, functionality is unimpeachable and the ambience draws you in. The facelift has kept the tech current and nothing here beats the Golf for all-round vision, seat comfort, room for five adults and overall utility. It is mind-blowing how ahead of the pack the Mk7 was in 2013. The sheer ubiquity of the VW’s dated cookie-cutter dash and some minor hidden switchgear are perhaps the sumptuous Highline’s only true shortcomings. 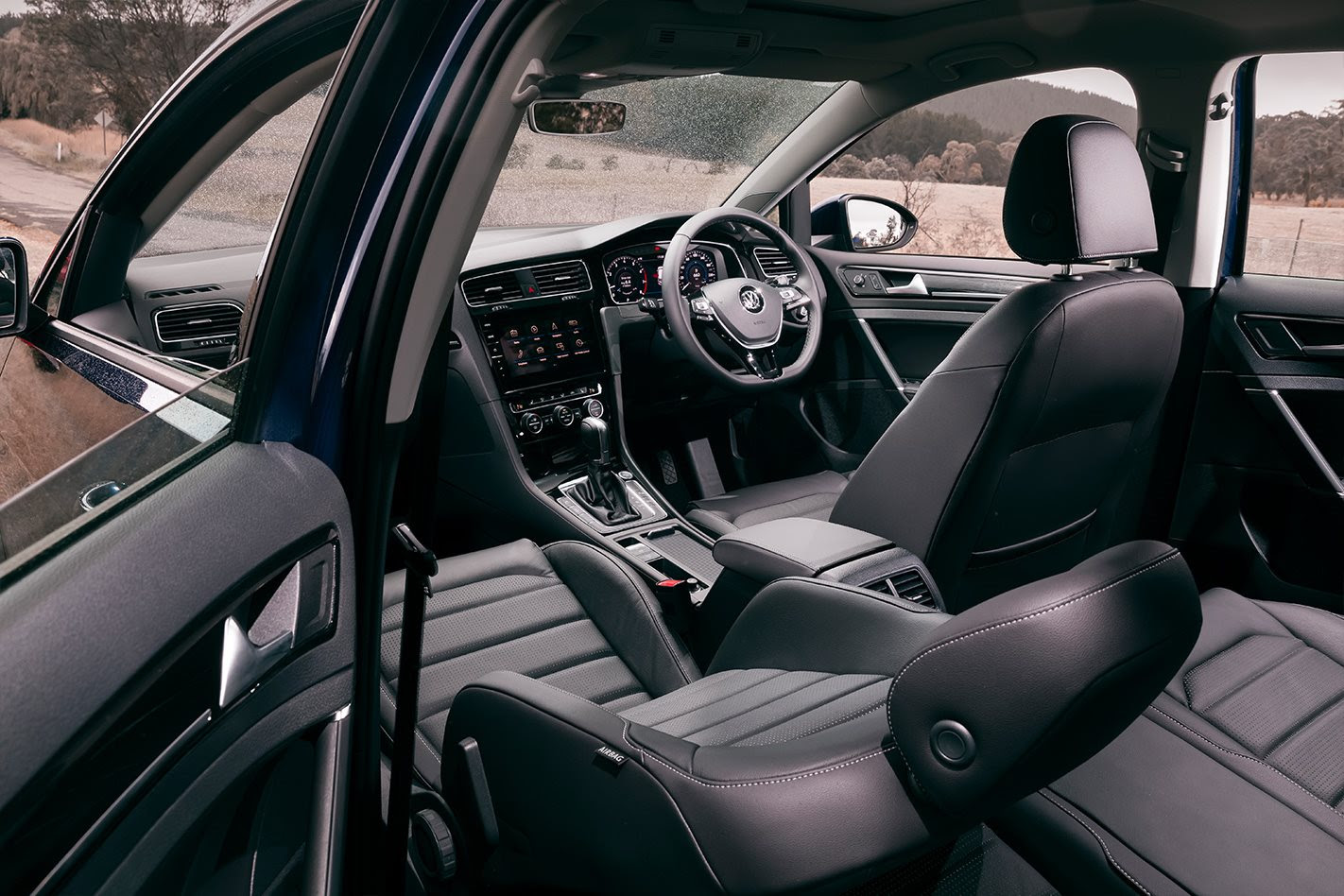 In some ways the latest 3’s cabin is more akin to the Golf’s more daring Audi A3 cousin, since it so obviously forfeits rear-seat access and headroom (both of which remain serviceable but noticeably inferior to the Golf) at the altar of style. Yet the Astina is very much its own, fiercely Japanese achievement too. Check out the Alfa Giulia influences in the flowing horizontal lines, lush surfaces, tactile switchgear and dramatically better-quality trim than before; they all help the cocooned, almost hushed Mazda achieve a sense of sporty opulence that eludes even most luxury-branded hatches. Attention to detail is also remarkable, as evidenced in the seductively thin-rimmed wheel, Cinemascope-esque instrument dials that could grace a Porsche and the flawless driving position. Jobs for this car’s successor would be limited to improving back-seat access, stretching rear legroom and fixing the dismal rear vision, but none are so bad as to be deal breakers. Otherwise, Hiroshima’s cohesive C-segment hatch leaps two generations forward.

In terms of performance, neither of our test examples achieved what we know them to be capable of, partly because both were very green in terms of ultra-low kilometres, and partly because our test strip was damp.

But the gap in the acceleration numbers is not substantial. The Golf hit 100km/h from a standing start in 8.3sec, the Mazda was just 0.3sec adrift at 8.6sec. Later, both grew exponentially faster as the kilometres piled on. However, the turbo-fed Golf always felt perkier as well as sweeter at lower speeds than our tight atmo 3, which required a concerted right foot and lots of revs for really rapid getaways. But in the 80-120km/h increment, there’s virtually nothing in it: 5.7sec for the Mazda; 5.6sec for the VW. It’s the Golf’s torque at lower revs that makes it feel the more responsive of the pair; only when fully wrung out does the gap between them close.

Likewise, there’s not a huge difference in fuel consumption. During our test period, the Mazda used 8.8L/100km, the VW a bit more frugal at 8.2L/100km.

But what about dynamic differences? After all, there are key hardware variations. The Astina uses a simpler torsion beam rear suspension and wears size 18-inch rubber; the Golf has independent rear suspension and runs on smaller 17-inch wheels and tyres. The 3’s steering is deliciously immersive and pitch-perfect in effort, ushering in newfound handling fluency and poise, remaining uncorrupted even at speed over tight, bumpy roads, and finally elevating the series up alongside greats such as the Focus ST-Line and Peugeot 308. The Mazda is also much, much quieter than the just-superseded model imparting a vault-like isolation from most road surfaces. That old, jiggly droning that defined (and defiled) previous 3s is history. 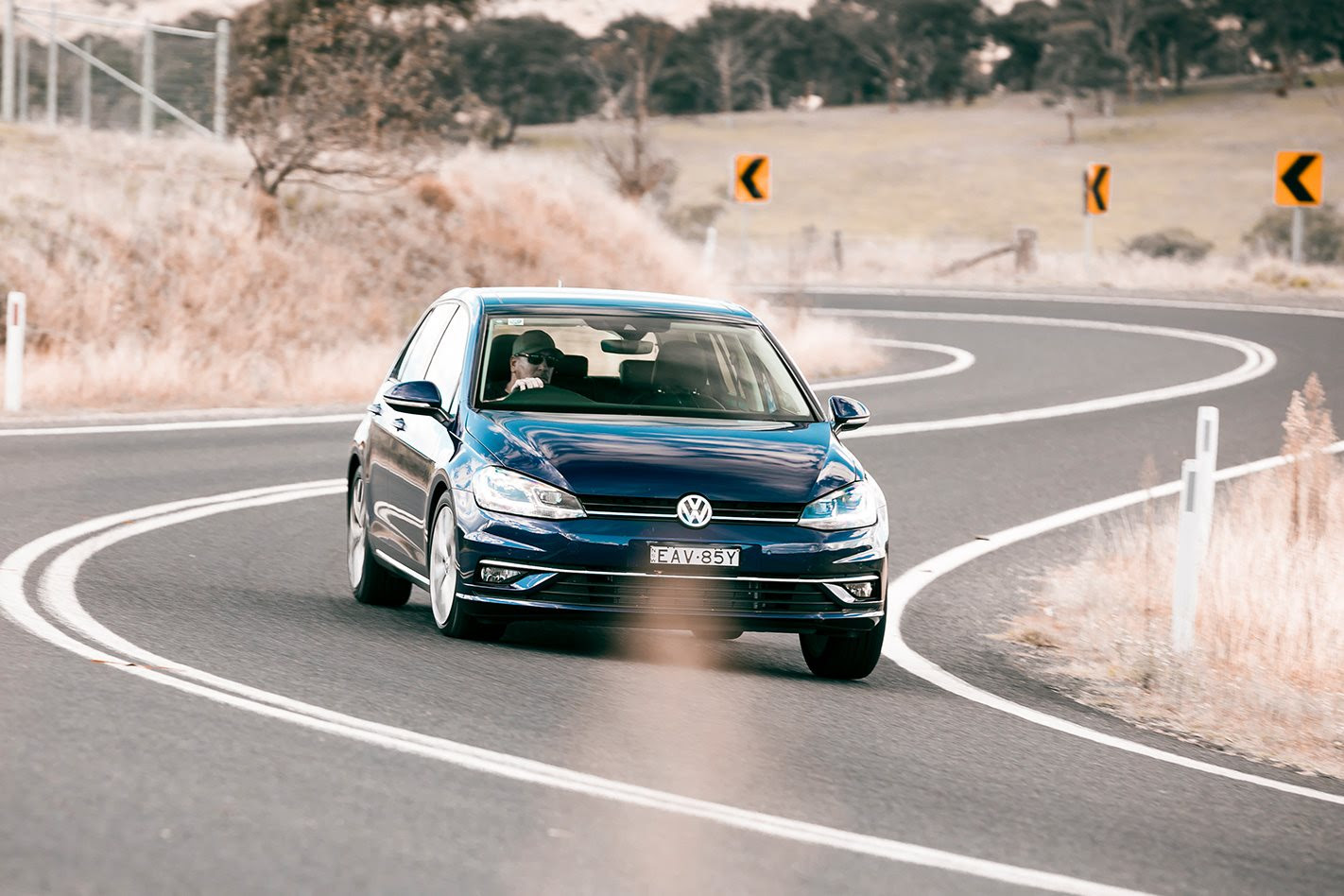 Riding on 17s, the Golf prevails with a softer ride, but the Highline’s body motion isn’t as contained as the Astina’s, and likewise the VW’s steering is both less instantly responsive and not quite as tactile. But only comparatively, for the ageing VW still steers sweetly, and is a supremely secure and relaxed high-speed grand tourer, carving through the apexes with entertaining precision, self-assurance and imperious dignity.

We’ve long said the seventh Golf iteration is one of the world’s best vehicles and all the car anybody would ever need, and little changes, highlighting the monumental achievements of this 2012 design. The 110TSI Highline may be marginally more expensive, but it brings Audi levels of tech, quality and desirability for much less. Yep, that’s why this VW is a bargain, despite the seemingly hefty sticker price.

And if you’ve regularly got passengers in the back – and you genuinely care about their comfort and visibility back there – that alone could be enough for the Golf to be the better car for you. Likewise, if you are a chronic over-packer and require every bit of available luggage space, that’s another area the Golf has a useful advantage over the new Mazda 3. No doubt the Golf 7 served as a muse for Mazda when developing the latest 3, for the result is its own brilliant interpretation of what a 2020s hatch should be, rather than yet another carbon copy. The latest 3 possesses possibly Mazda’s best-ever small-car cabin – it’s certainly the quietest. That lovely steering wheel, fine seating, great ergonomics, gorgeous instrumentation, premium controls and fastidious quality all set the cocooning Astina apart. However, entry/egress out back is limited due to a lower roofline and smaller door apertures, vision out is limited in every direction and back-seat legroom also lags behind the Golf’s despite scalloped front seatbacks. Spare is a space saver, but boot volume is just 295L. And yes, you need to work the engine enthusiastically to get the best out of it.

Yet even with the packaging caveats, the new 3, in G25 Astina guise at least, is good enough to (only just) nudge aside the previous class benchmark to take the top step of the podium.