Hyundai i30 New or a used Focus RS 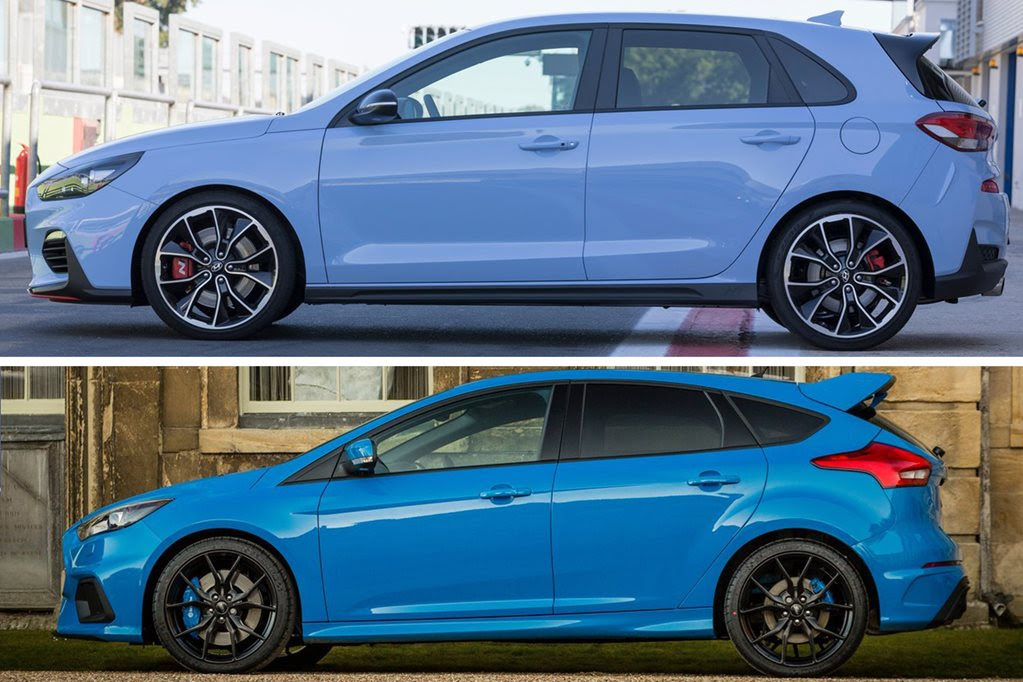 New vs Used? Head vs Heart?

Hot hatches can provide some of the biggest thrills of any performance car. Find the right road and they’re also devastatingly quick, something the two contenders here can attest.

Hyundai’s first foray into the world of hot hatches came as a bit of a surprise – and not solely because of its South Korean badge. It’s more the fact that the i30 N is such a sorted product for something that’s considered genesis for the fledgling sporty N brand. 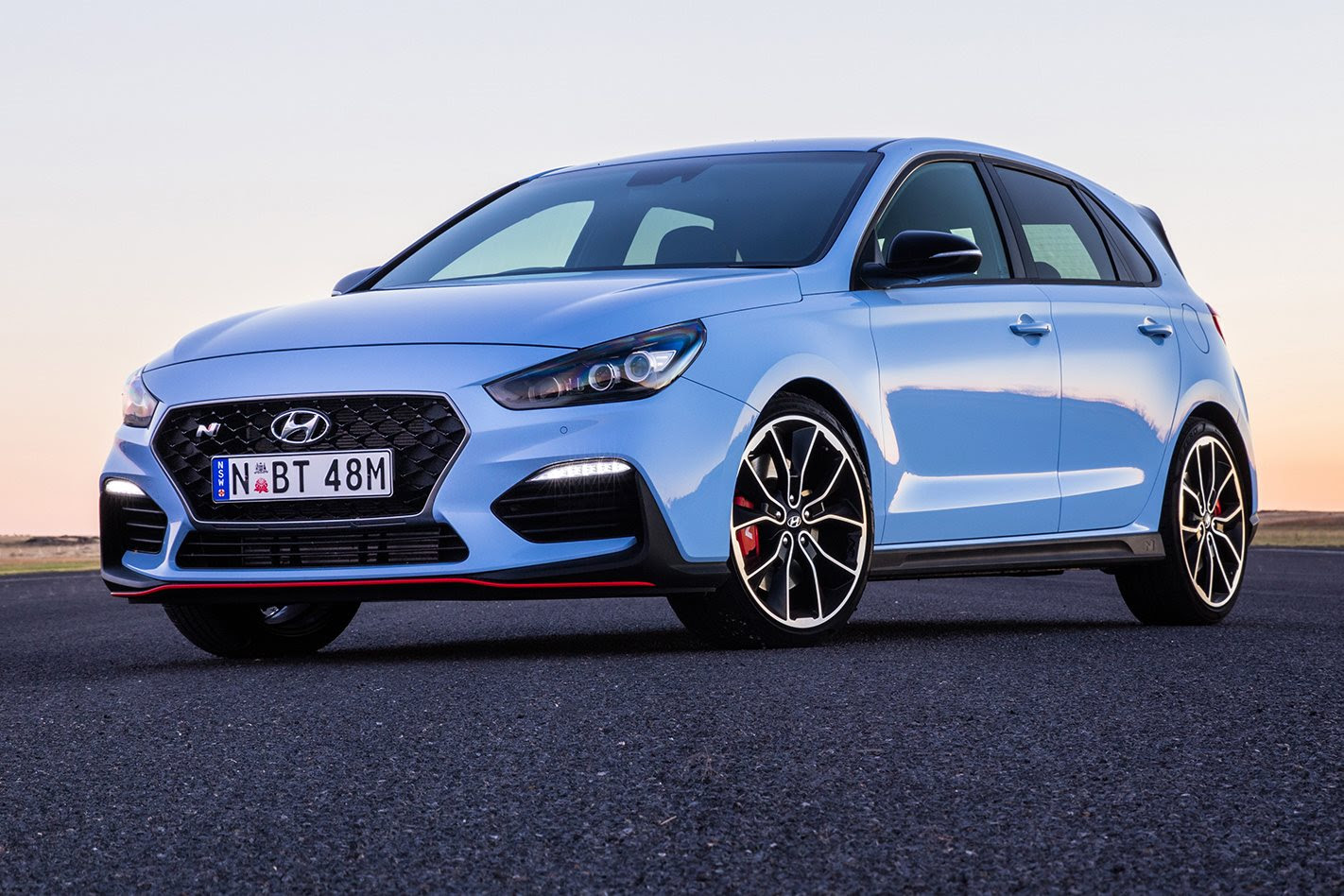 Flip the conversation to Ford, and it’s no shock that the Focus RS is an astonishing jigger. The Blue Oval has form and pedigree with this genre. But with both available at around $40K new (i30 N) and used (Focus RS), which would you have?

At $39,990 you’re getting a whole heap of bang for your bucks. And from the exhaust, sometimes there are literally bangs from the rally car-esque overrun. The i30 N certainly is theatrical in its raciest N mode. Hyundai’s hot hatch is one of those cheeky cars that gets under your skin in all the right ways. 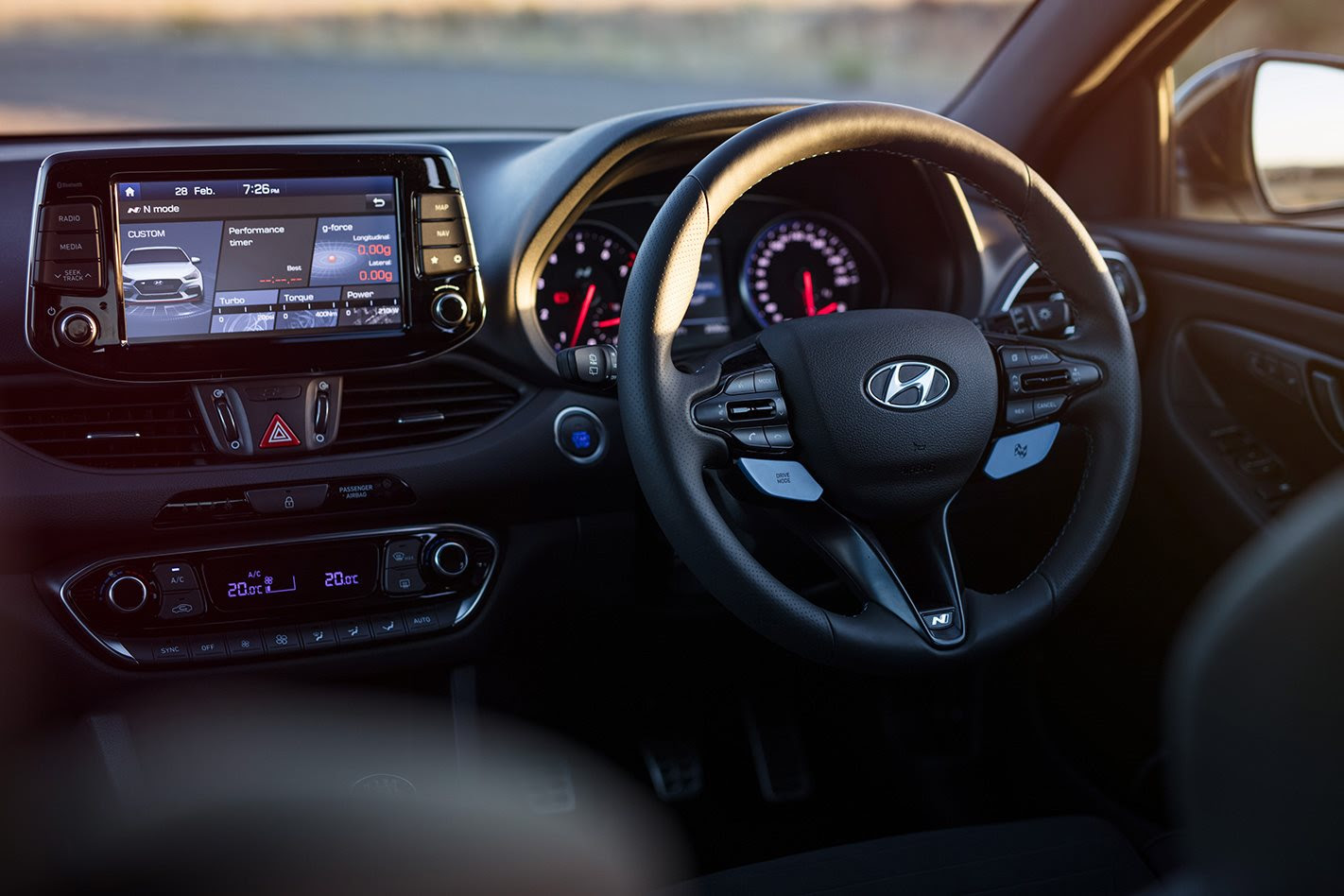 It’s no slouch, either, with the Theta-II 2.0-litre four-pot pumping out 202kW (6000rpm) and 353Nm (1450-4700rpm), or 378Nm on overboost (1750-4200rpm). The twin-scroll turbo offers meaningful punch throughout the rev range, but there’s little benefit taking the i30 N right to redline. You’re better off enjoying the meaty mid-range. Drive is sent to the front wheels only, the tricky E-LSD deals with wheel spin (shod with Pirelli P-Zero HN tyres) and torque steer well, while the six-speed manual is pleasing to use.

In terms of fun factor and dynamic competency, the 1429kg i30 N impresses. Thanks to adaptive dampers (and the adoption of the Fastback N’s suspension set-up) the i30 is comfortable in its softer settings. However, N mode should definitely be reserved for smooth roads or racetracks. Speaking of, it’s also worth noting that the i30 N has a five year track warranty – which could come in handy if you’re partial to pitting your hot hatch against the stopwatch. Inside the N is much like garden-variety i30s. Money has been spent on upgrading the tactile steering wheel, gear shifter and well-bolstered seats. There are also N motifs dotted around the cabin to remind you you’re in something a bit special. The infotainment system supports Apple CarPlay and Android Auto, while also allowing you to flick through myriad driving mode parameters, including full customisation of the settings. Overall it’s a truly impressive bit of kit.

Lots of power, lots of grip and a Drift mode… it’s a recipe for success. The Ford Focus RS scores a 257kW (6000rpm) and 440Nm (2000-4000rpm) 2.3-litre four-cylinder turbo, sticky Michelin Sport Cup 2 rubber, a sophisticated all-wheel-drive system and a slick six-speed manual. The four-pot certainly is a gutsy and linear unit, and you get an extra 30Nm to play with on overboost. While the Hyundai sounds like a rally car on steroids, the RS plays the forest-fighting card with slightly more discerning pops that sound a little more authentic. 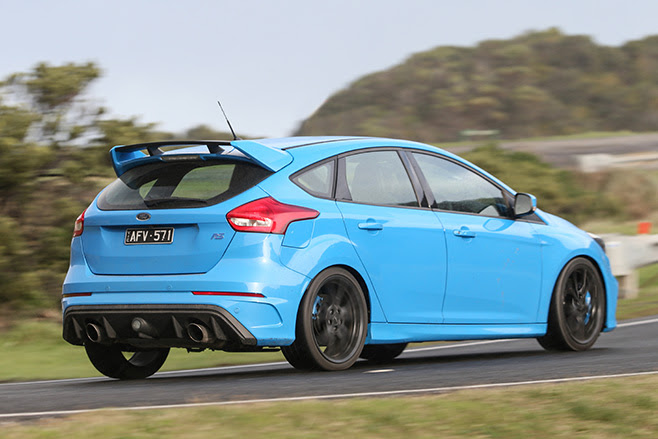 Interestingly, Ford’s third-generation RS switched from front- to all-wheel-drive. Up to 70 percent of the RS’s grunt can be sent rearwards to the wheel with the most grip, so purposeful movement at the back can be achieved. Or just flick it into the infamous Drift mode for even more slip angle. The front-end hangs on vehemently and also offers savage traction on corner exit to slingshot you out of apexes. Its downfall, though, is a ride quality that verges on tooth-rattling over really gruff tarmac, easing to something mildly agreeable in its softest setting.

The Focus-based cabin is one of the RS’s few flaws. You don’t really get many frills for the price tag. Although, like the i30 N, the money has been spent in the right areas – namely the optional Recaro bucket seats. However, if you’re tall, you might want to consider aftermarket options to lower the driver’s pew as it’s positioned far too high. Like the Hyundai, rear headroom is spacious and the five-door hatch body style ticks pragmatic boxes. 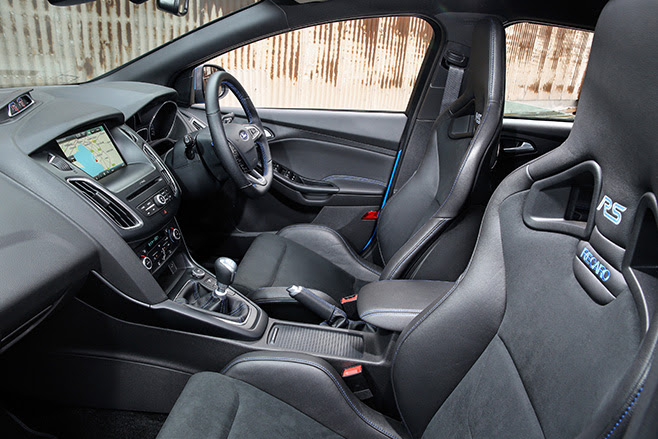 I once covered 1100km in 18 hours behind the wheel of a Ford Focus RS Limited Edition. It was epic and tiring in equal measures – especially when you factor in the terrain, which included Victoria’s glorious Alpine region. The Focus RS isn’t perfect, the body-hugging Recaro seats sit far too high and the ride quality is, ahem, harsh at best, but damn it’s talented. The chassis and rear-biased all-wheel drive-system is playful despite the monumental amount of grip available. To get one for i30 N money you’re going to be playing outside Ford’s three-year warranty, but for me it’s the one I’d choose.

Dynamically – where these two cars are designed to excel – the i30 N is not as talented and quick as the Ford, which sways me toward the Blue Oval. But below ultimate grip level, the N is hugely fun to drive, and more engaging at normal speed limits. Add in its overt exhaust sound and relatively mammoth five-year track-approved warranty and my head is swayed toward the Korean. Also, I prefer the i30’s racey blue paint… so the Hyundai it is for me.

It’s no great secret that I adore the Hyundai i30 N. I think it is one of the best affordable performance cars available right now. But the Focus RS is an absolute riot, and at just under $40K for a clean used example, a bit of a bargain (compared to the price when new). My only reservation in choosing the all-paw uber hatch is the well-covered head gasket issues that plagued the car. If I could secure one that had Ford’s fix completed that’d seal the deal for me, otherwise I’ll be content with my Hyundai with its rally car sounds and five-year track warranty. 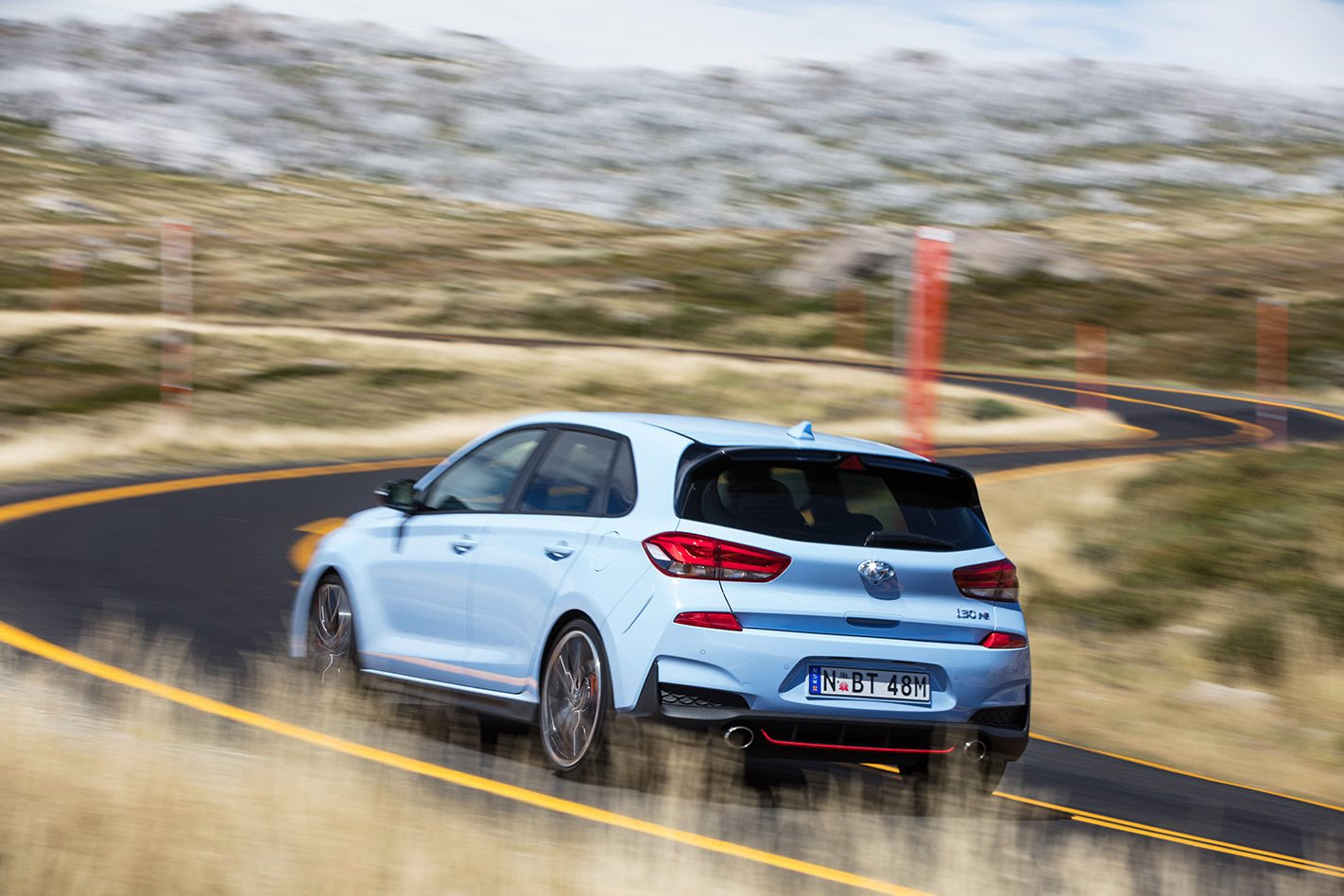