A favourite served with extra sauce…….

Over their various lifecycles, cars, much like people, tend to get bigger, fatter and more ungainly. But just occasionally, a model will buck the trend as if it discovered the chalice of eternal youth. That’s why the ND-generation Mazda MX-5 is one of the most astonishingly good sportscars in recent memory.

Instead of piling on the pounds and inches and following the lead of the NB and NC, the ND returned to first principles and, despite offering all the safety and convenience features any new car requires, is about the same size and weight as the original NA that launched three generations before it.

The little Japanese hero leaves a lasting impression not with massive power outputs and bone-shattering suspension, but with pure finesse in an admirable demonstration of restraint and minimalism. 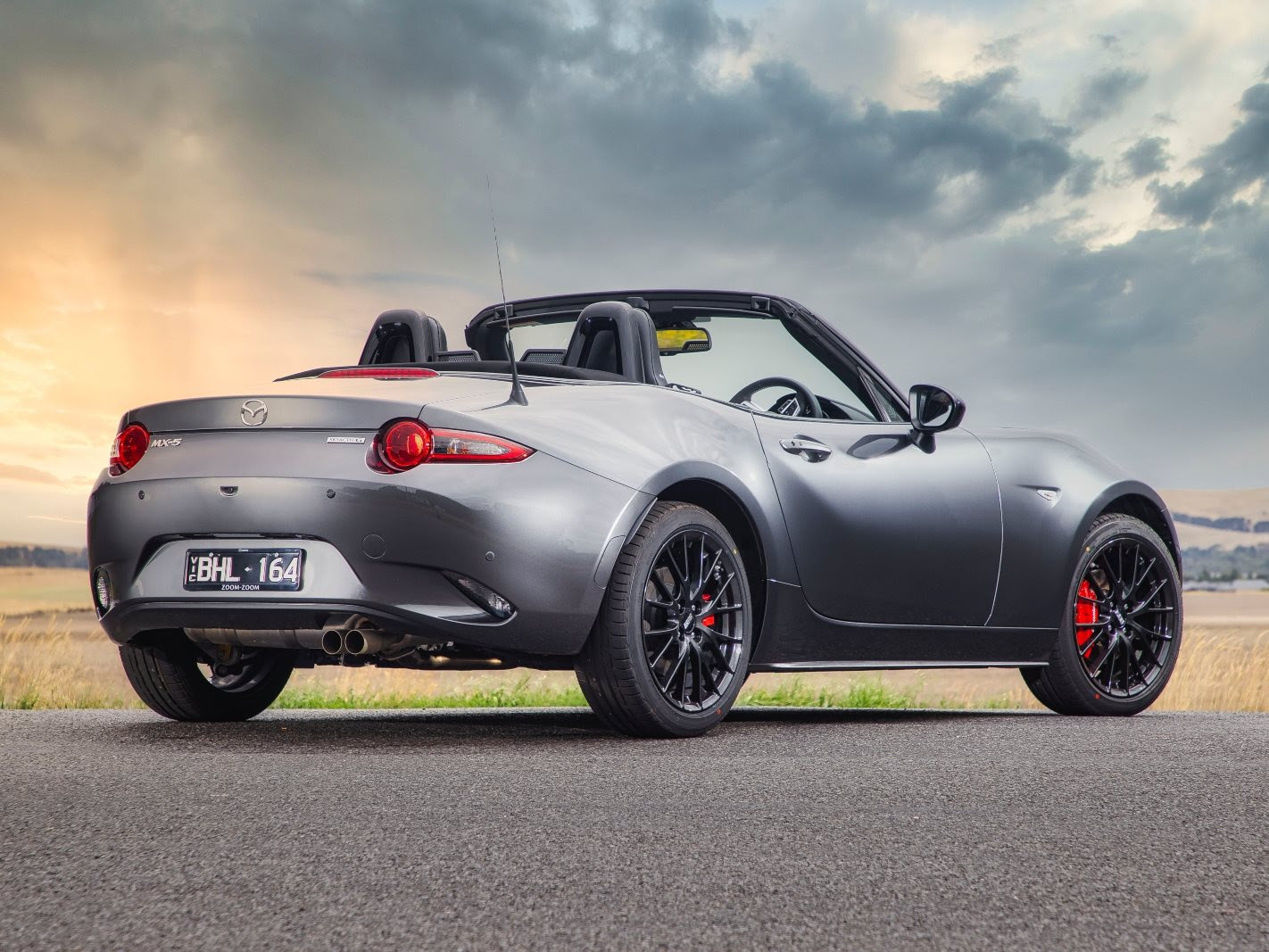 Which is why the addition of a new flagship variant might be cause for concern. It’s called the MX-5 GT RS and it has a number of modifications that, says Mazda, makes it more at home on a racing circuit.

In place of the standard alloy wheel, the RS has BBS forged rims with a new cross-spoke design, there are brembo four-piston brakes on the front axle and, most controversially, stiffer Bilstein dampers and a strut brace.

A more aggressively tuned chassis will doubtless make the MX-5 more adept on perfectly groomed track surfaces, but if it spoils the wonderful road ride, then this version will forfeit a little of the Mazda’s soul. 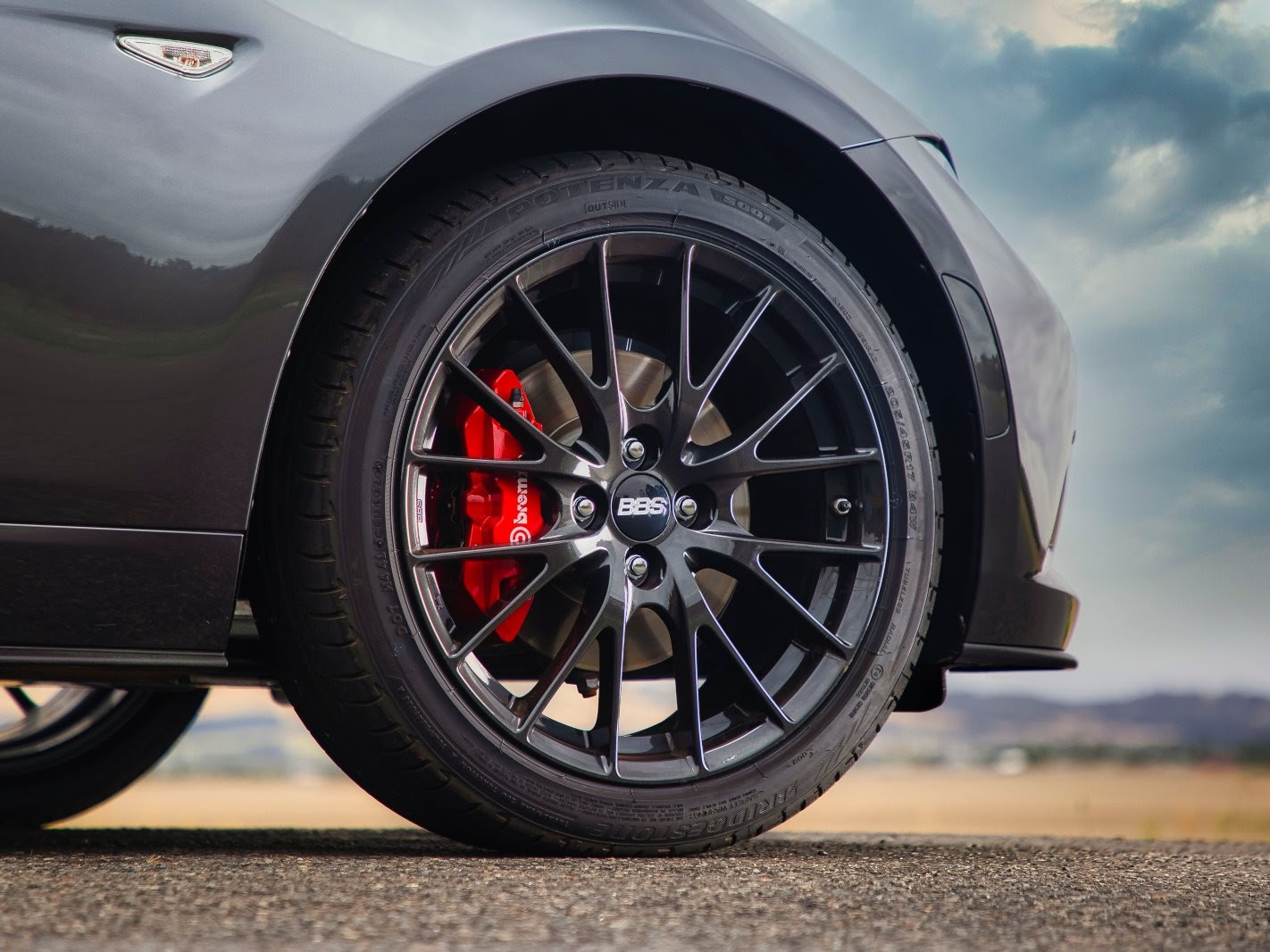 With an unchanged 2.0-litre under the RS’s bonnet and 135kW on tap, the Mazda is most at home on tighter technical courses where you can find its limits comfortably and its relatively modest power won’t feel breathless. To that end, the Broadford Motorcycle Complex in central Victoria is the perfect match.

Here, the full extent of the RS changes can be exploited and to the limit, and it doesn’t take long to remember why the MX-5 is lauded among driving enthusiasts. Its performance is remarkably accessible and there’s an immediate confidence in its ability. 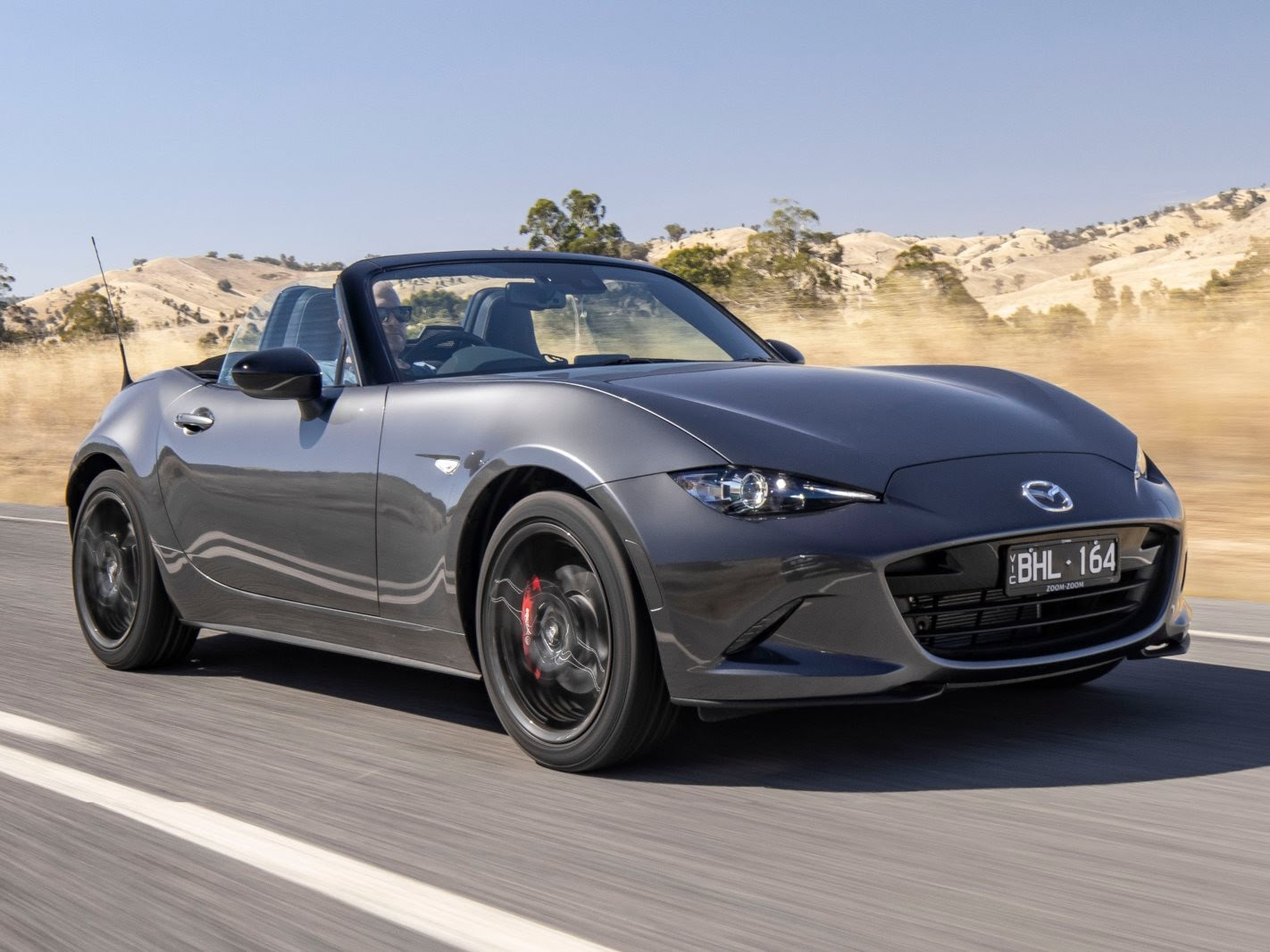 You don’t so much climb into the MX-5 but more slip it on like a perfectly sized brogue. The driving position adds to it with a snug supportive cabin and good view of the surroundings.

But even at low speed the MX-5’s chassis really shines. The skinny steering wheel is beautifully weighted and offers excellent feedback, the nose tips into corners with an obedience that would embarrass a kelpie and the tail end is just as lively.

With so much pliability engineered into the chassis, the MX-5 has a number of personalities. Its tail will step out under hard braking into a corner, it’ll do it again mid corner as the lock is wound on a little too much, and you can have one more oversteer experience on the exit if you keep the accelerator pinned.

That said, with more disciplined control, the MX-5 can carry surprising speed through corners. All the time its multilingual communication keeping the driver fully informed with the reserves of grip in all corners. Carry too much speed though a faster bend and a progressive lightness to the steering warns that the limit is near, brake too deep and the front tyres will howl at you, get on the gas too early and the skinny seats feel like they’re plumbed directly to the differential.

But most importantly, the deft chassis tuning has numbed none of the Mazda’s playfulness. In fact, an opportunity to drive the sub-RS version back to back, made the changes stand out.

While the RS still has the same charisma and vitality in corners, the combination of beefier dampers and a strut-brace allows the MX-5 to lock onto a line and hold a more constant course through bends. There’s less correction necessary mid-turn unless you like that kind of drama in which case the sharper chassis enables easier provocation of oversteer. 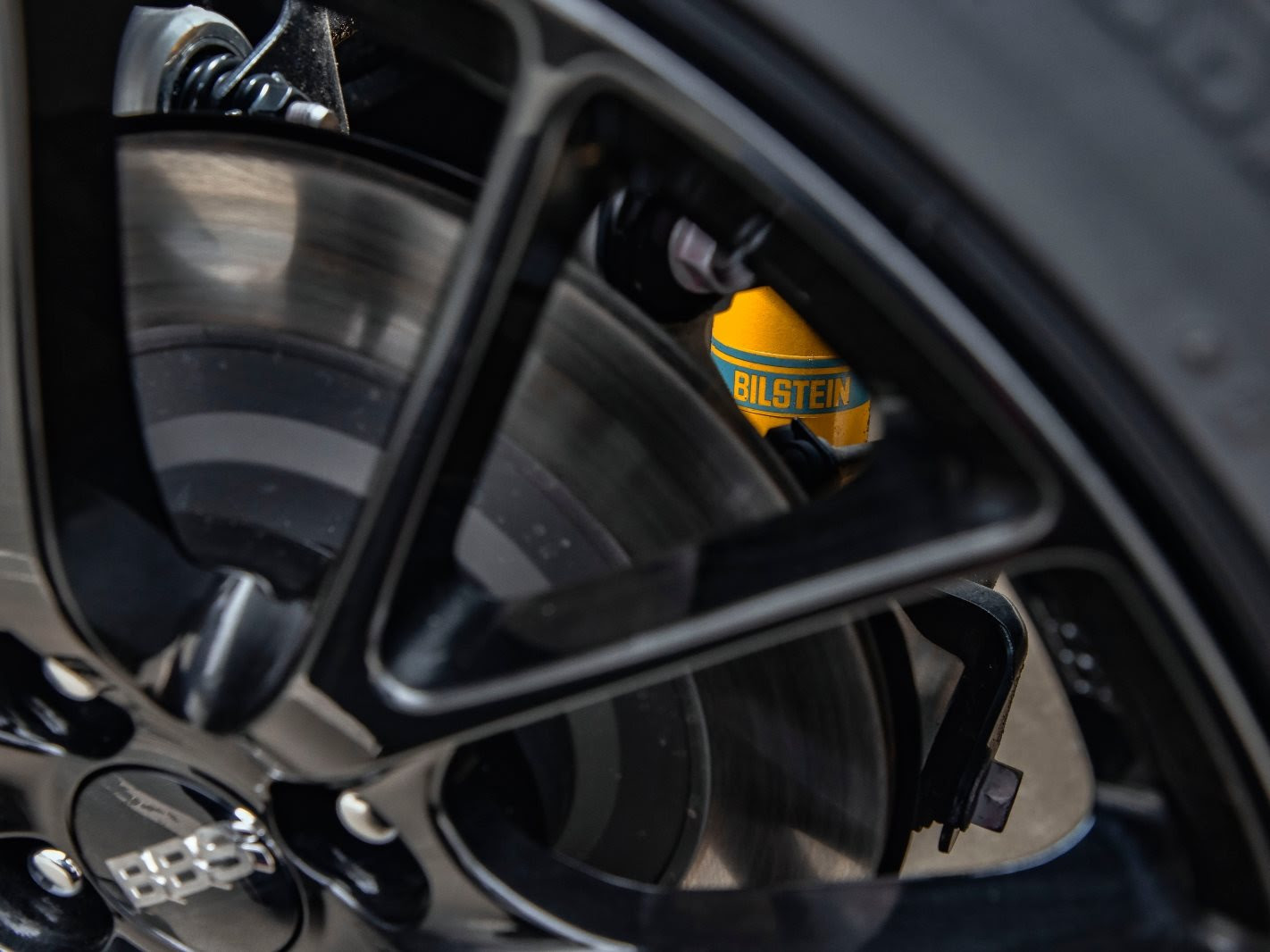 And while the standard brakes were starting to give off the unmistakable scent of tortured graphite by the end of the first lap, the Brembos and special pad compound remained odourless for two or three. A more consistent pedal feel was the most notable performance advantage with neither set up fading under the track conditions.

Unless you are lucky enough to have regular access to a race track, it’s likely a majority of the MX-5 kilometres will be clocked up on public roads and, while the RS is undoubtedly the favourite for circuit work, if it compromises on-road ability then its purpose is a little flawed.

Thankfully it’s actually a bit of a gem. The combination of firmer ride and reduced body roll makes the RS even more like its mechanically related Abarth 124 Spider. In a word, the new version feels more serious. 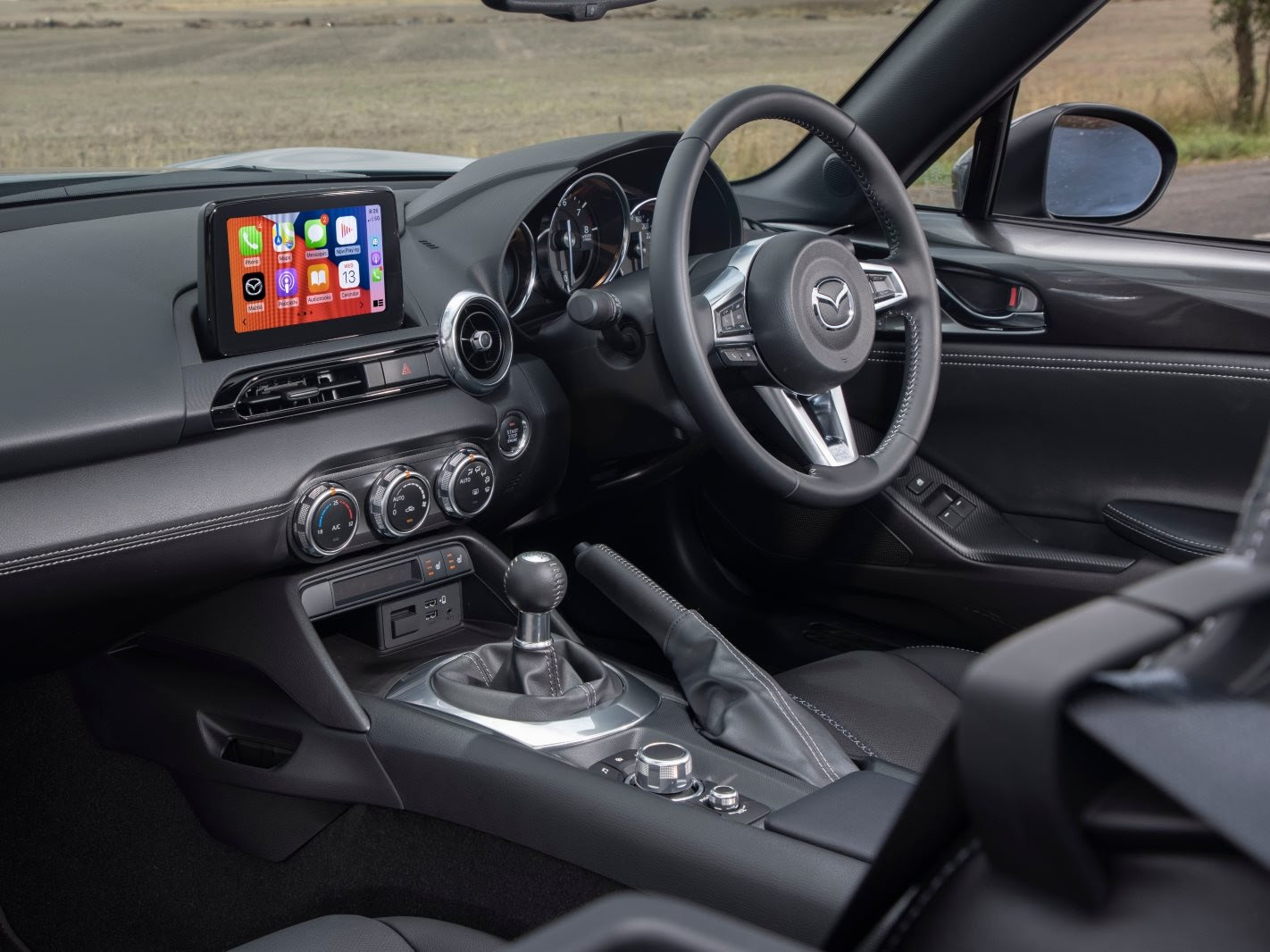 That might not sit comfortably with those purists who love the pitch, dive and roll you get from the unfettled version but neither versions are a clear favourite for road use. It’s very much a matter of taste and choice.

There’s still enough compliance in the springs to be comfortable and the beautiful steering on track translates perfectly to imperfect roads. The odd Armco-lined hairpin also made the big Brembos welcome on the road too.

Thankfully though, the RS still feels like the MX-5 with a strong, free-revving engine, a superb manual gear-shift, and the choice of soft top or RF folding tin-top. Only the auto army will be disappointed with no six-speed automatic available.

While its price is a significant step up over some lesser variants, it does represent good value both pragmatically and emotionally. If you wanted to create your own interpretation of the RS with off-the-shelf parts, you certainly wouldn’t find a set of forged alloy wheels, German-engineered dampers, brakes from one of the world’s most trusted brands and a strut brace for $3200. But the value equation makes perfect sense if you intend to spend a majority of your time at the wheel of an MX-5 on either very good roads or a track. The RS proves the theory that a few small changes can make a big difference.

The chassis tweaks have robbed some of the MX-5’s charming nature on more inconsistent roads. However, its firmer ride is certainly not uncomfortable and the resistance to roll not unwelcome so the new RS simply presents a choice. If you prefer the more compliant suspension and animated body control that the ND MX-5 showcased, there are still eight options in the line-up to choose from. But if a sharper, more focused specimen is what you’re after, the RS still offers almost all the attributes that put the MX-5 on the map, but with a little extra sass.