Plus – Prodigious power; stunning dynamics for an SUV; premium interior

The Wheels Verdict: If you desire a design-driven SUV with coupe pretences and devastatingly capable performance, the Cayenne Coupe fits the bill. However, if ultimate practicality and a cheaper price tag mean more, stick with the traditional wagon. Either way, the Cayenne Coupe is an impressive proposition that defies all the laws of physics. ‘Fun’ and ‘SUV’ can now be said in the same sentence. 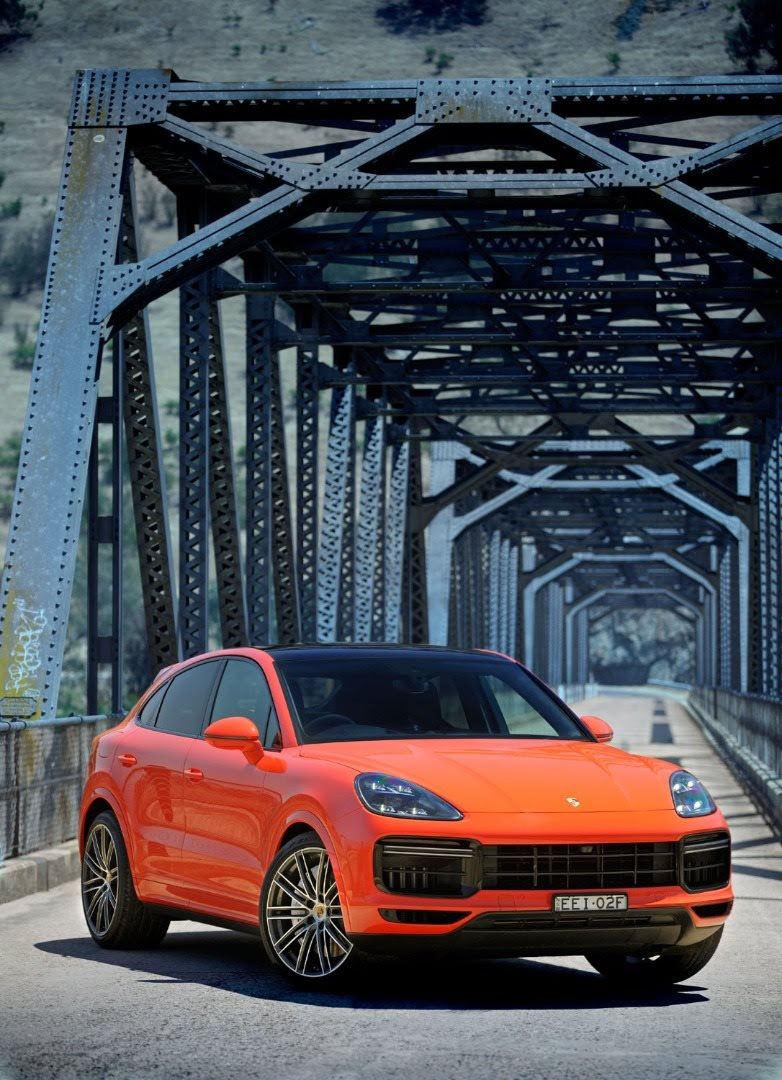 WHAT IS THE PORSCHE CAYENNE COUPE?

It’s a Porsche Cayenne, just with an in-vogue coupe silhouette with 18mm-wider hips. It comes as a four-seater as standard, but you can option a rear middle pew. So it’s the Porsche SUV to be seen in rather than the one to take the kids to school. Oh, and the Turbo is very fast and dynamically talented – it’s a Porsche after all.

We got behind the wheel overseas, but this is our first chance to test the ‘stylish’ Cayenne on Aussie soil, in Canberra. Porsche has speculated that about 20 percent of Cayenne sales will go to the Coupe, but if early interest is anything to go by, that portion could easily increase. 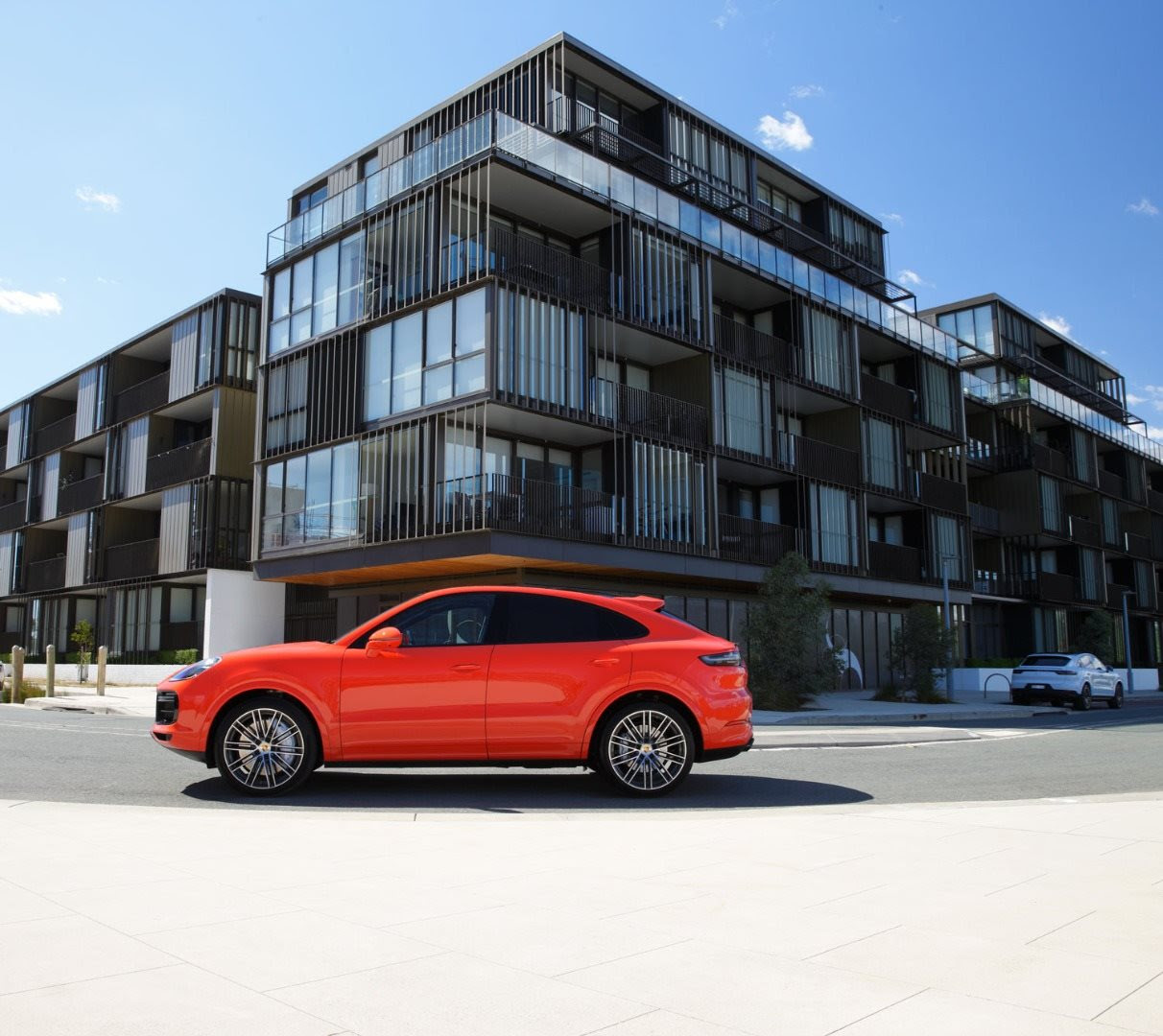 Brand identity is incredibly important. Gaining a favourable one is vital. Simply reference Porsche, or see the famed badge, and it is high-performance road cars and on-track success that immediately come to mind; not a style and market-driven SUV. And no, I haven’t been living under a rock. I’m aware the Cayenne has been with us since 2002. Its success, paired with the smaller Macan, facilitates the halo models we know and love.

However, the Cayenne has proven it fits Stuttgart’s USP. If you want a sporting SUV with enough grunt to scare supercars, a modicum of off-road ability and enough space to carry the kids, few rivals do it better and with this much cachet. Now there is a swoopy, coupe-like version that, according to Porsche, was part of the planning from the inception of the third generation. Opinions on the design vary, but it’s safe to say that Porsche’s attempt at the genre BMW’s X6 created is a good one. Oh, and that Lava Orange hue is a $5000 option. Interior opulence is high, with an array of luxurious materials and tactile controls. The instrument cluster, which favours the tacho like all Porsches do, is a highlight, with the prominent analogue clock signifying the Sport Chrono package (standard on all Coupes). The 12.3-inch touchscreen is intuitive to use and features Apple CarPlay integration – but not for Android Auto. The steering wheel is near perfect and makes you feel like you’re sat in a 911. All the controls are logically laid out, especially the dial for mode selection, but the cruise-control stalk is slightly antiquated.

The eight-way adjustable leather front seats are very comfortable (heated and ventilated), while rear-seat legroom is abundant. Headroom, with the fixed-class panoramic roof, is noticeably tighter than the wagon despite the rear seats being lowered 30mm to account for the 20mm drop in roof height. Boot space has decreased to 600 litres for the Turbo.

Under the Turbo’s bonnet is the ‘hot vee’ twin-turbo V8 producing 404kW and 770Nm. It is an absolute powerhouse and it gathers speed in truly staggering fashion. It’s enough grunt to propel the 2200kg Turbo to 100km/h in 3.9 seconds (all Coupes come with Sport Chrono as standard) and on to a top speed of 286km/h. Combined fuel consumption is a rather thirsty 12.3L/100km, but if you’re worried about that, you’re buying the wrong SUV. It sounds good, too, although it could be louder from within the cabin, and the optional sports exhaust system is $5970. 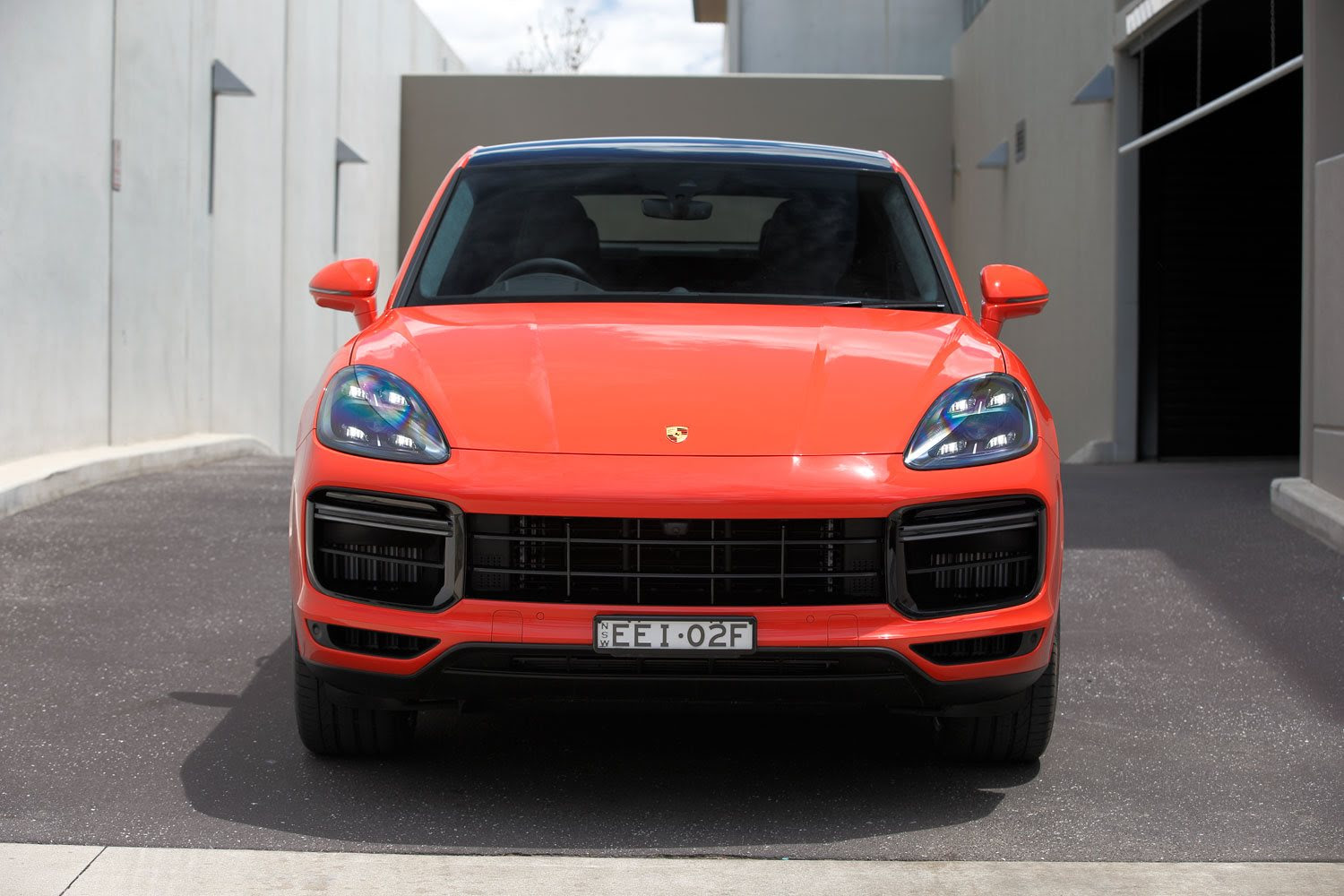 Built on the same MLBevo platform that underpins the likes of the Lamborghini Urus, Bentley Bentayga, Audi RSQ8 and Volkswagen Touareg, the Cayenne Coupe is in esteemed company. And it shows. The way in which the Coupe disguises its heft defies the laws of physics. Seemingly no matter what the velocity, pitch the two-tonne-plus behemoth at an apex and it will hold on vehemently while remaining flat through the arc of the corner.

This is thanks to the three-chamber air suspension and new electromechanical 48-volt roll stabilisation system which keeps body movements in check. Four modes are available – Normal, Sport, Sport Plus and Individual – while you can tailor parameters via the touchscreen. However, the Turbo isn’t infallible, with the large 22-inch alloys skipping over closely stacked, sharp imperfections. It doesn’t deal with our often second-rate roads as well as smooth European surfaces. Still, the damping is well controlled, quelling unwanted vertical movements.

With the optional rear steering ($4300) and Porsche Torque Vectoring Plus ($3120), the wheelbase essentially shrinks around you. The way in which the Coupe can stop, turn and power out of tight bends beggars belief. It feels like a properly sorted hot hatch, not a near five-metre-long SUV (4939mm) that’s 1653mm tall.

Grip is never an issue, especially with 315-section Pirelli P Zero hoops to dig into the tarmac. Yet, it’s not always totally tied down, with ample grunt to induce subtle yaw movements. The steering, in any mode, is somewhat remote, but the brakes are mega. How about 415mm discs with 10-piston calipers up front and 365mm rear discs with four-piston calipers at the rear for size?

Some might say that the heavy, style-driven coupe SUV dilutes Porsche’s hard-earned reputation. However, the Cayenne Coupe disproves this as so much of the company’s traditional DNA courses through its plunging profile.