All New Mazda CX-30 – the Inbetweener

Plus – Striking design inside and out; high level of equipment; positive ownership proposition

Minus – Suspension firm on Aussie roads; getting expensive; no SkyActiv-X… yet

The Wheels Verdict: Mazda’s upmarket push is continuing at pace, and the stylish CX-30 bolsters this movement. Yes, you pay a premium for it, but the luxurious cabin belies the Japanese brand’s traditional badge status, the exterior is visually appealing and the driving experience is pleasing. It’s a shame a more advanced powertrain isn’t offered, but that should change in the future. Ultimately, the CX-30 is yet another example of why Mazda is so popular with private buyers. 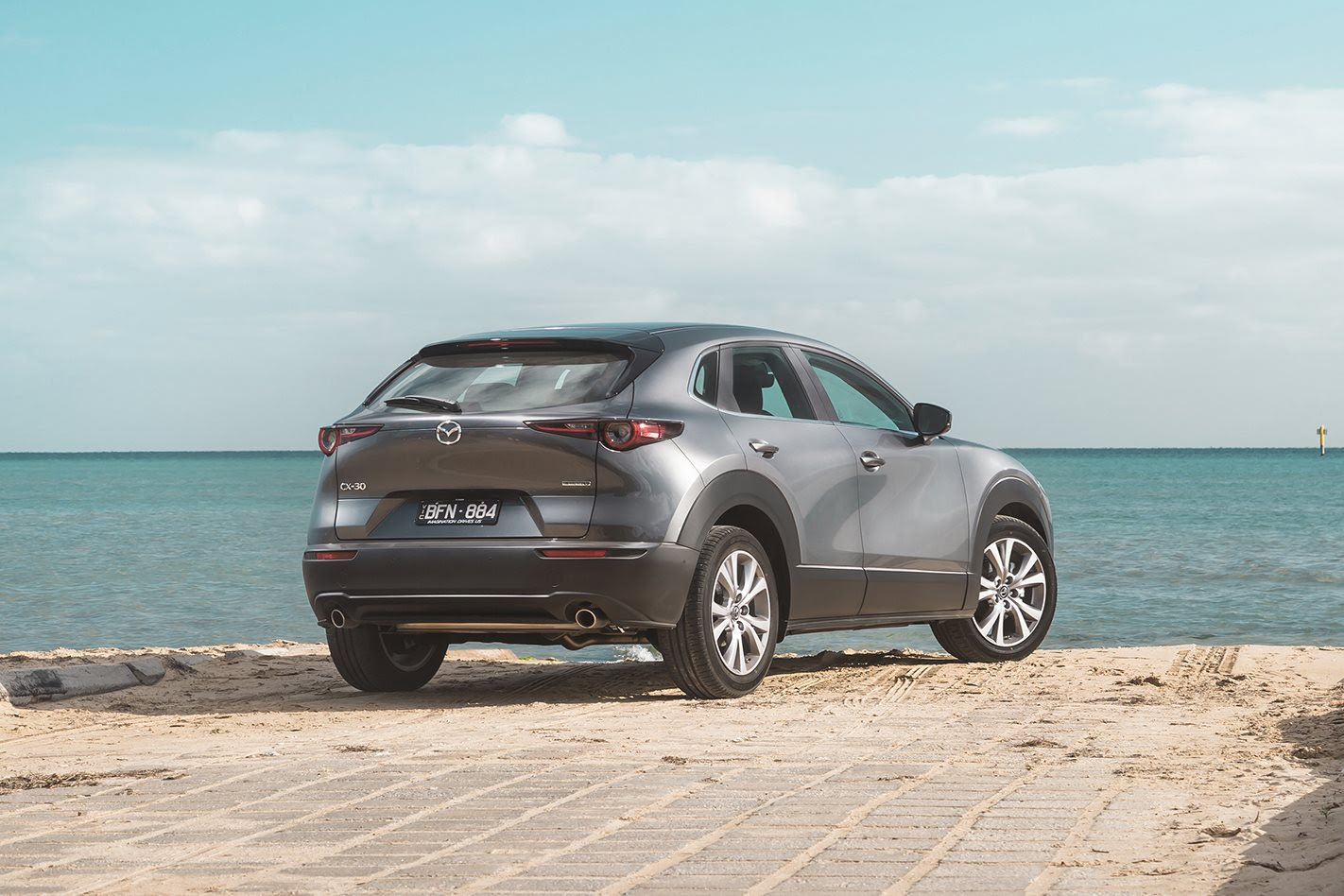 Essentially, it’s Piggy in the Middle. If the CX-3 is too small and the CX-5 is too big, the CX-30 provides a meaningful bridge between the two. Thanks to the ‘Charge and Release’ update to the Kodo design language, the CX-30 combines style with a plush cabin, engine and driveline options as well as a healthy mix of form and function. It’s the compact SUV that might also convert a few Mazda 3 buyers into the land of crossovers.

Australia’s appetite for SUVs seems to know no bounds. The CX-30 is the latest offering to enter the ring and this is our first opportunity to test it on home soil. And its popularity might already be proven, with Mazda taking customer orders before it even rolled into showrooms. 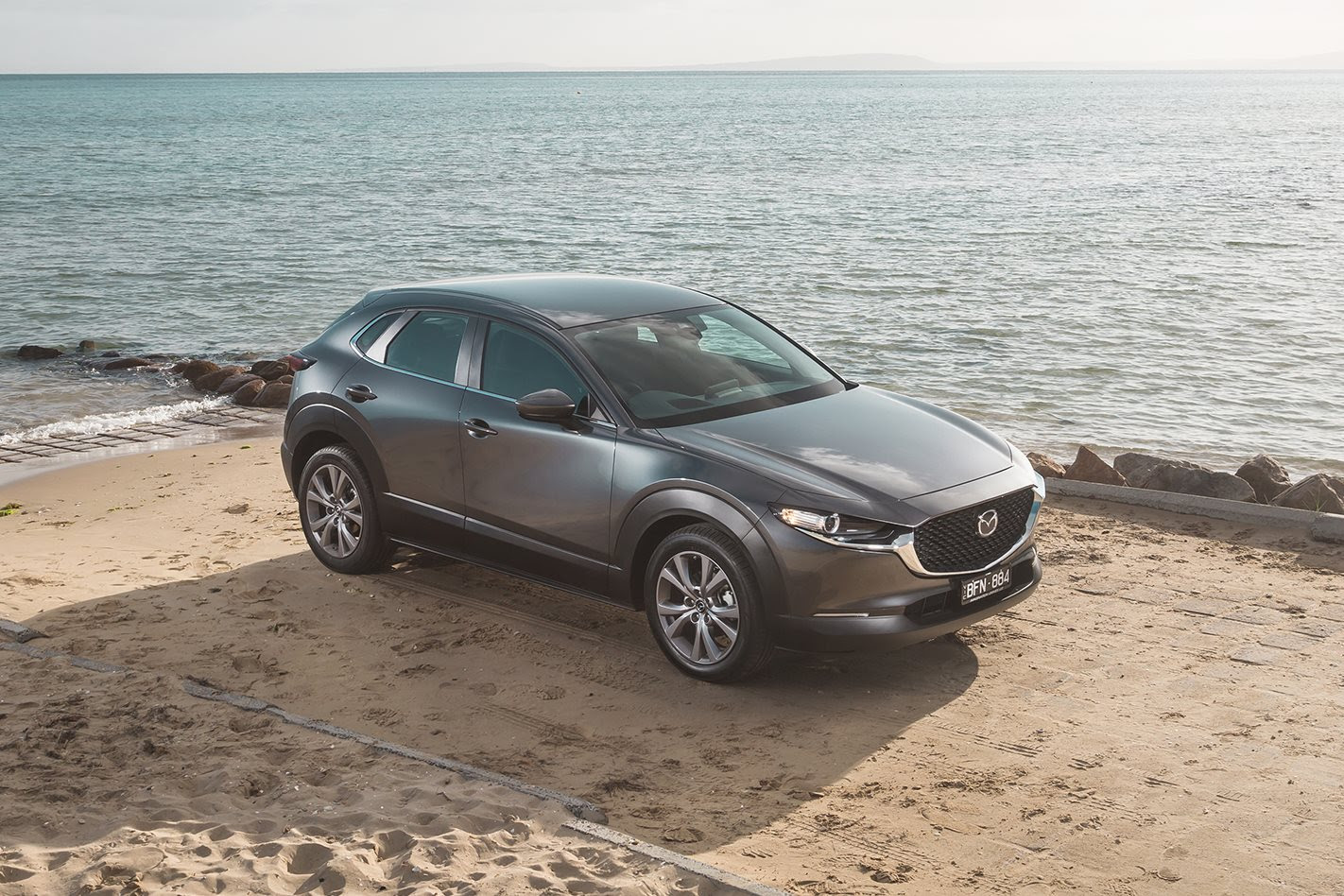 Most people are inquisitive by nature, which makes it interesting when driving a car that is yet to be released. Often the ‘I’m looking, but I’m not looking’ gazes ensue, while a few are brave enough come up and ‘take a geeze’. Thing is, it usually happens with the likes of sports cars, not a mid-$30K compact SUV. The fact a punter is asking, “Oi mate, is that the new CX-30?” before its on-sale date says a lot about Mazda’s brand equity down under.

On this occasion the probing goes further, with questions regarding spec levels, drivetrains and prices flowing thick and fast. Even availability of the revolutionary SkyActiv-X compression-ignition engine is thrown into the mix. Such inquisitiveness proves that Mazda’s projection of selling 800 units a month seems feasible.

Oh, and the answers; there are four variant grades (Pure, Evolve, Touring and Astina), two engines at launch (2.0-litre and 2.5-litre four-cylinder petrols) as well as front- and all-wheel drive. Prices start from $29,990 before rising to $43,490 for the top spec version. The SkyActiv-X unit is slated, but not until much later in the year – such is the global demand. 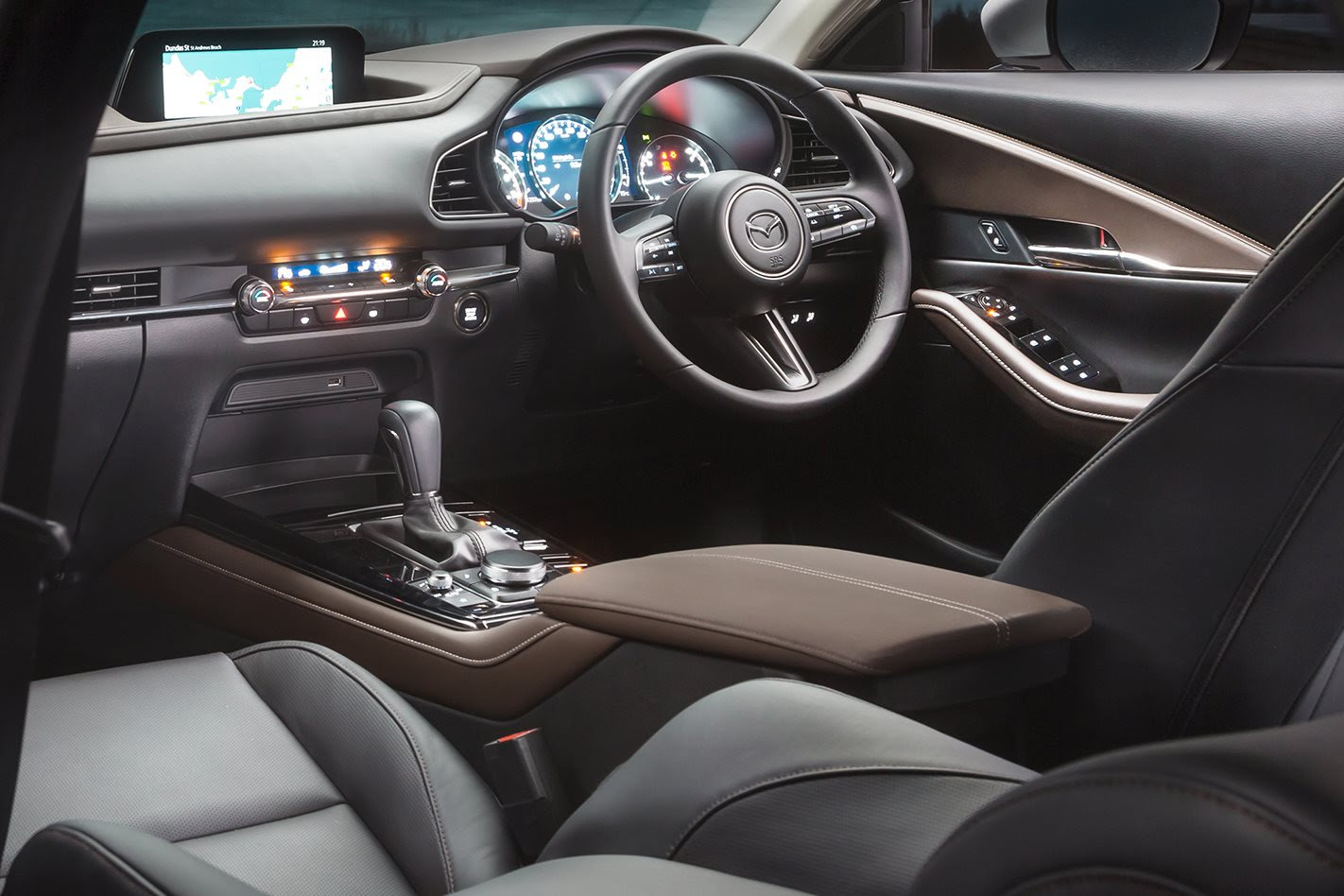 Surprisingly, the querying continues; “So which one is this, then?” Well, it’s the mid-to-high spec $34,990 G20 Touring with front-wheel drive (all-wheel-drive variants will be available from March 2020) and a six-speed torque-converter automatic. G20 designates the 2.0-litre engine, while the 2.5-litre gains a G25 moniker.

And then came the kicker; “Why does it exist?” It’s a great question. And the answer is found within Mazda’s SUV hierarchy. The CX-3 sits at the compact end of compact SUV segment it plays in, but conversely, the CX-5 has eased its belt out a little. Enter the CX-30. So why isn’t it called the CX-4? That nomenclature is already used on a swoopy, Chinese-market-only SUV under the joint venture FAW Mazda. Long story short, the CX-30 nestles into a gap in the Japanese marque’s range that, as it turns out, is unexpectedly worthwhile.

Inside Mazda’s premium push is evident. It might be an almost carbon copy of the 3 hatchback and sedan, but the materials used remain rich in colour and pleasingly tactile. In fact the interior execution probably exceeds what we consider premium marques in this corner of the market. Simplicity and elegance meet in remarkable fashion. The 8.8-inch infotainment screen feels at home within the design, the climate controls scream quality and the well-resolved marriage between the dash and door cards create a cocoon-like effect. The head-up display is crystal clear – it’s one of the best in the business – while there’s a long list of standard safety features. 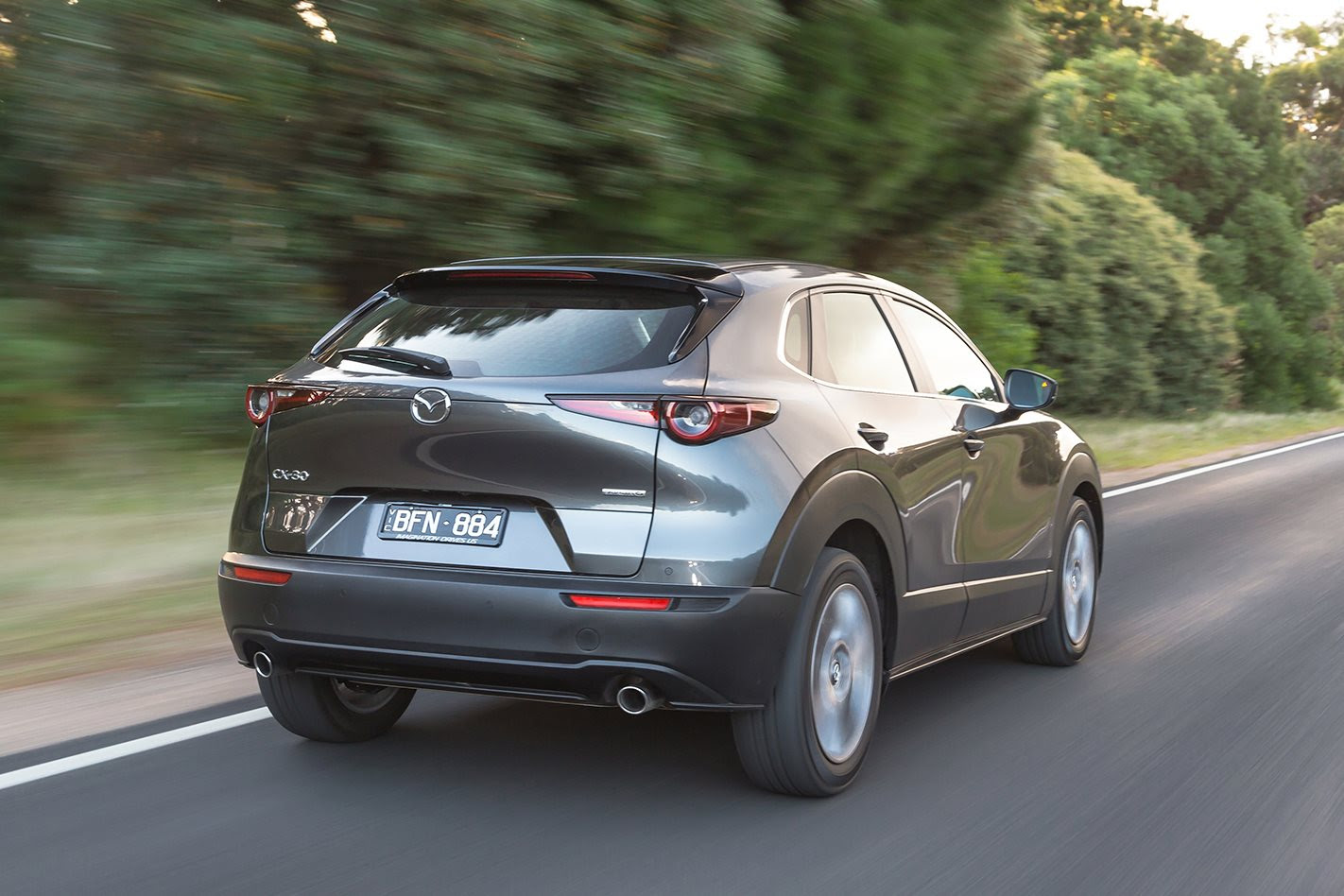 Sitting behind the superb multi-function steering wheel it becomes apparent that this isn’t a tall-boy SUV. The driving position is low-slung, exacerbated by the rather high waistline. It feels like a raised hatchback far more than an off-roader. However, the bigger body hasn’t generated a plethora of extra cabin space. Rear-seat knee and toe room is tighter than expected, while headroom can be described as adequate rather than abundant. Boot space is respectable at 422 litres, while the 60/40-split rear bench aids practicality for chunky loads.

Under the bonnet it’s more about mechanical status quo given SkyActiv X is yet to arrive down under. Hence the G20 is endowed with 114kW and 200Nm, with both figures being produced high in the rev range (6000rpm and 4000rpm respectively). And while the front-driven CX-30 isn’t any great porker at 1339kg, the SkyActiv-G powertrain needs a thorough accelerator prod for meaningful progress. Mazda counters this by claiming that this naturally-aspirated engine returns better real-world fuel figures than the typically torque-rich small capacity turbo lump. In reality all is okay as the 1998cc powerplant spins freely. But it’s vocal while doing so and few will see the claimed combined fuel consumption of 6.5L/100km. You can step up to the G25 and gain a 139kW/252Nm 2.5-litre four-cylinder, but the reward versus monetary outlay is questionable. Also continuing on is the six-speed torque converter automatic, which despite its age, performs adeptly in most situations.

While the CX-30 uses the Mazda 3’s next-gen SkyActiv-infused platform as a base, it isn’t quite the jacked-up hatchback we were expecting in terms of dynamics. On smooth surfaces the G20 Touring displays a level of body control and eagerness you’d expect from a Mazda. The steering almost reaches the same fluid level of the 3, while grip levels are sufficient with the 215/55 Dunlop SportMaxx tyres. However, push the envelope and there are some dynamic foibles. The CX-30 uses all of its suspension travel (MacPherson struts up front and a torsion beam at the rear) through big undulations, yet there isn’t enough control on rebound to quell the flow-on effect. Pull back the tempo and this is less of an issue, but the 18-inch-alloy-shod G20 Touring’s ride quality is also fussy over sharp, consecutive imperfections. A short stint in the G20 Pure, with chubby-tyred 16-inch alloys, cancelled out that sensation almost entirely. Road noise and NVH levels are well suppressed, with only the occasional disturbance from the suspension over significant potholes. Still, drive the CX-30 as sedately as most owners will and it’s a more than competent package.

Ultimately, this is an SUV that offers desirability and a level of luxury that embarrasses more fancied badges. It puts the on-paper prices, which can get quite expensive if you venture above the G20 Touring FWD, into stark perspective. For an SUV that could have easily slipped through the cracks and into obscurity within the Mazda line-up, it seems the CX-30’s place between the CX-3 and CX-5 is, ahem, just right. 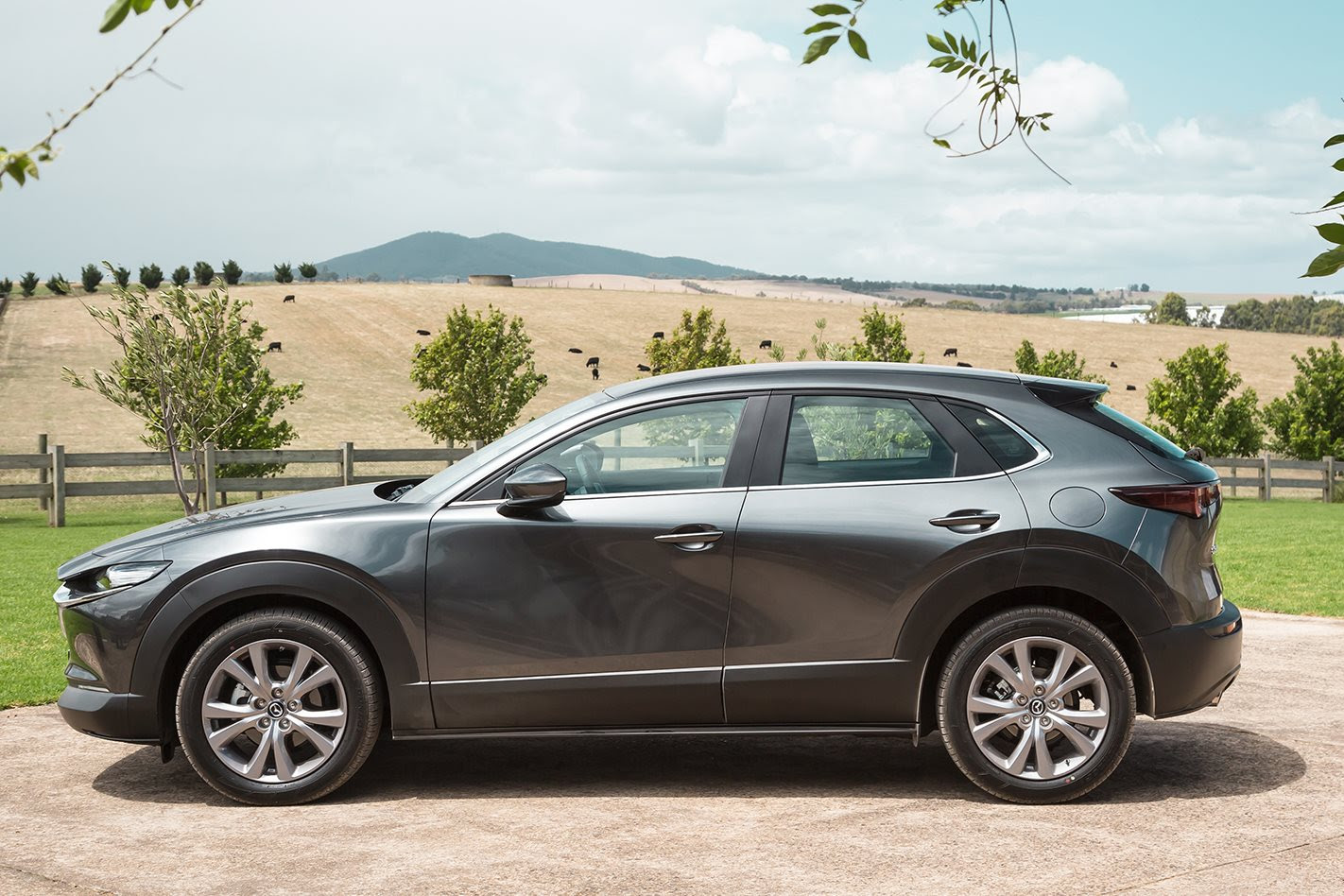