A little dash of sportiness

What is the Subaru Forester 2.5i Sport?

Introduced in October 2020, this latest variant of Subaru’s popular all-wheel-drive SUV bridges the gap between the mid-range 2.5i Premium and range-topping 2.5i-S spec. 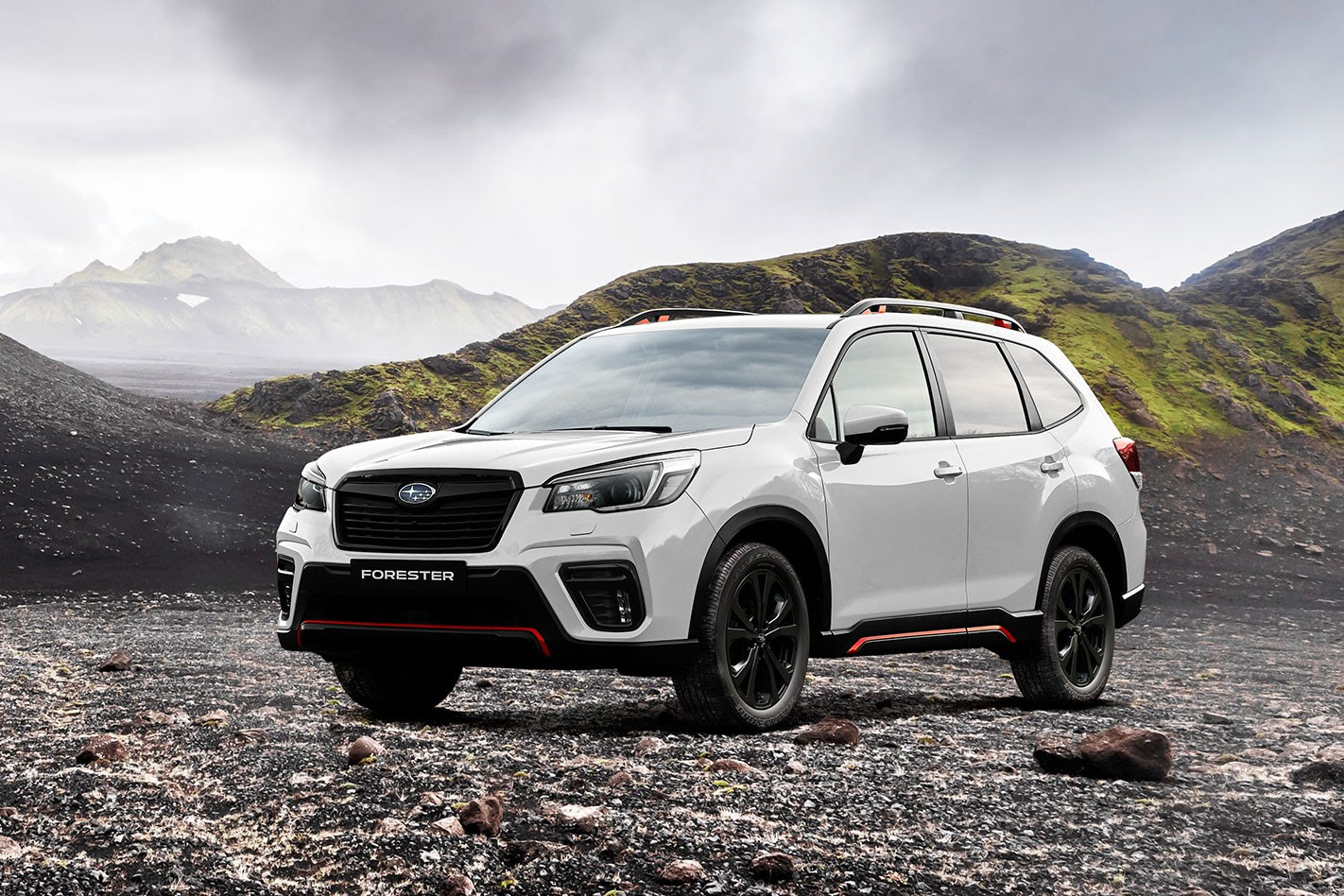 The result is, as the name suggests, a more sporty-looking Forester with decent off-road capability that appears to have been styled to compete with Toyota RAV4 Edge.

What is the Subaru Forester 2.5i Sport like to live with?

This is a well-equipped SUV that, sporty trim aside, has the same equipment-level as the mid-spec Premium, which includes Subaru’s Driver Monitoring System that uses facial recognition to detect if you’re drowsy or distracted and also personally greets you when you get in the car, sets the climate control to where you had it last and the driver’s seat and door mirrors to your preferred positions. 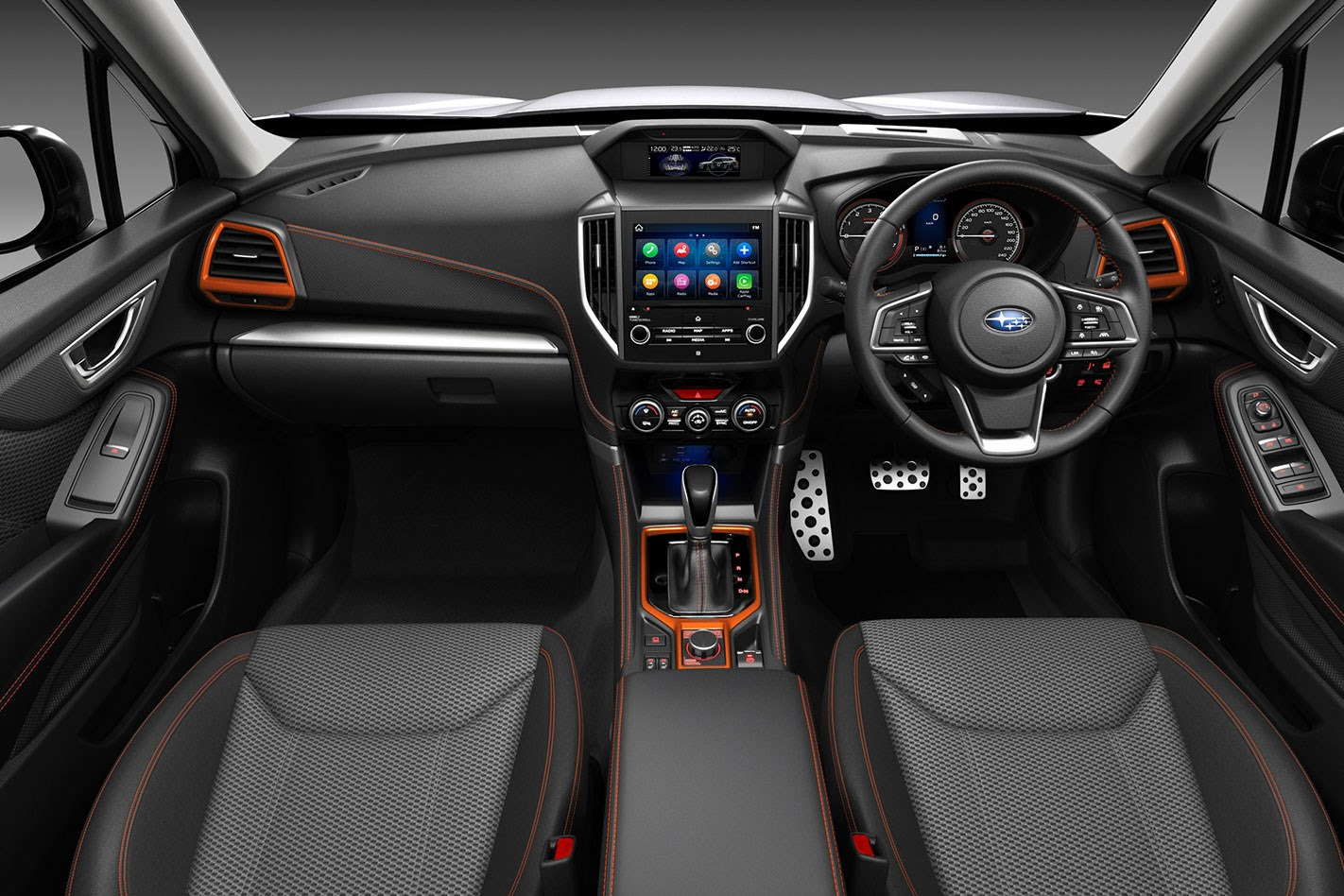 Other features include in-built satellite navigation, powered tailgate, eight-way powered front seats, front seat heaters and a tilting passenger-side door mirror that lets you see the kerb and other obstacles when you’re in reverse.

The Forester has a comfortable, roomy cabin with quality fit and finish. The Sport’s durable cloth seats are very comfortable and offer great back and hip support – I actually prefer Subaru’s cloth seats to the leather-appointed ones in the range-topping Forester 2.5i S. The driving position feels very natural, and there’s excellent all-round vision. 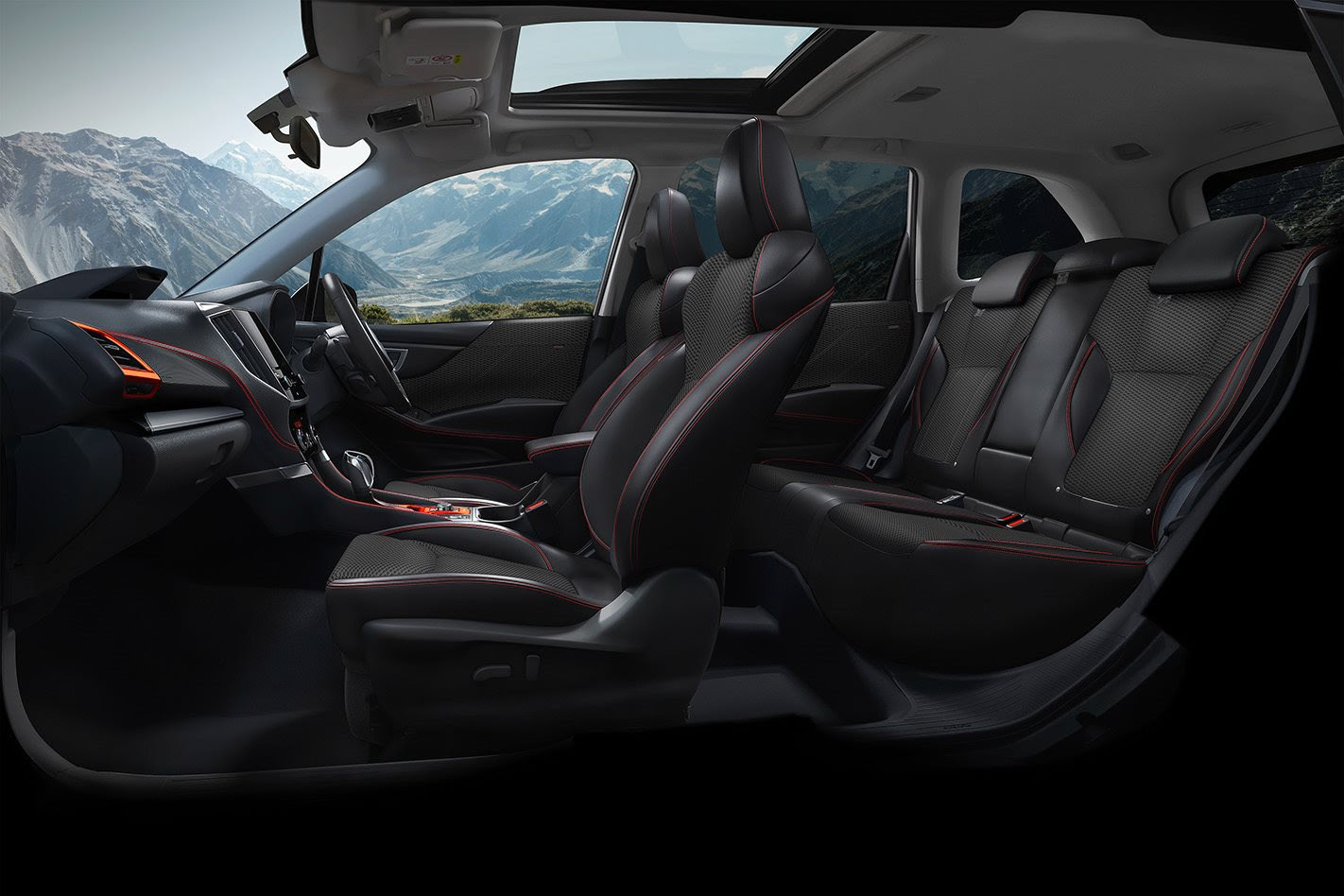 Down back, the Forester’s rear-seat legroom is plentiful even when the front seats are pushed back and there’s plenty of headroom too. The seats themselves are ergonomically well finished, though putting someone other than a child in the middle seat might be asking a bit much on extended trips.

Rear-seat occupants get their own air vents and two USB sockets to charge their electronic devices.

The Forester’s boot accommodates 498 litres of cargo, about average for a medium SUV, which expands up to 1768 litres with the 60:40 split seat-backs are pushed down. 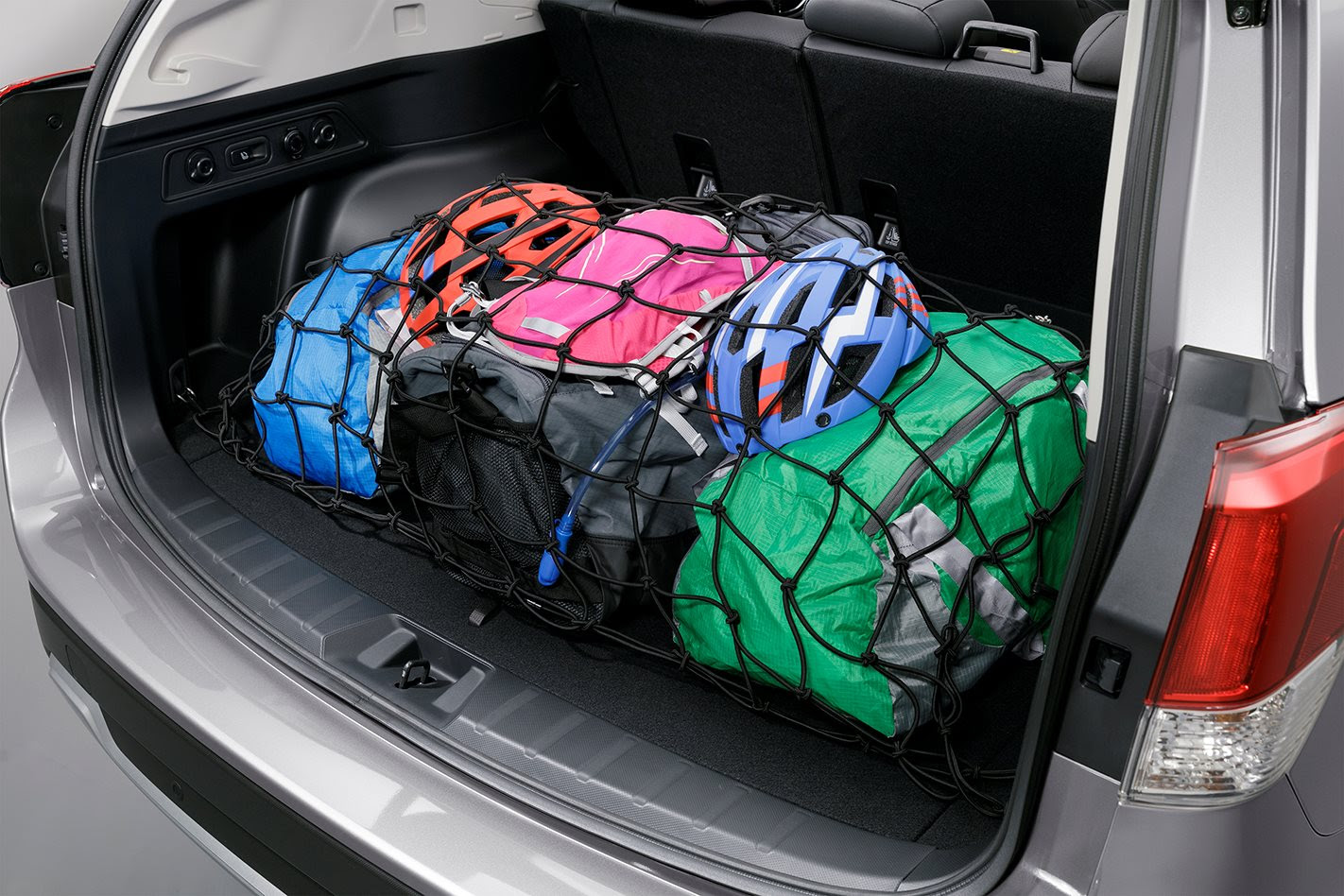 The load opening measures 1258mm wide between the tail-lights and the widest point of the luggage area is up to 1300mm – enough to fit a golf bag sideways.

The 136kW/239Nm 2.5-litre ‘Boxer’ engine, so-called because its four cylinders are laid flat in pairs and oppose each other, is mated to a continuously variable transmission (CVT) that drives all four wheels. 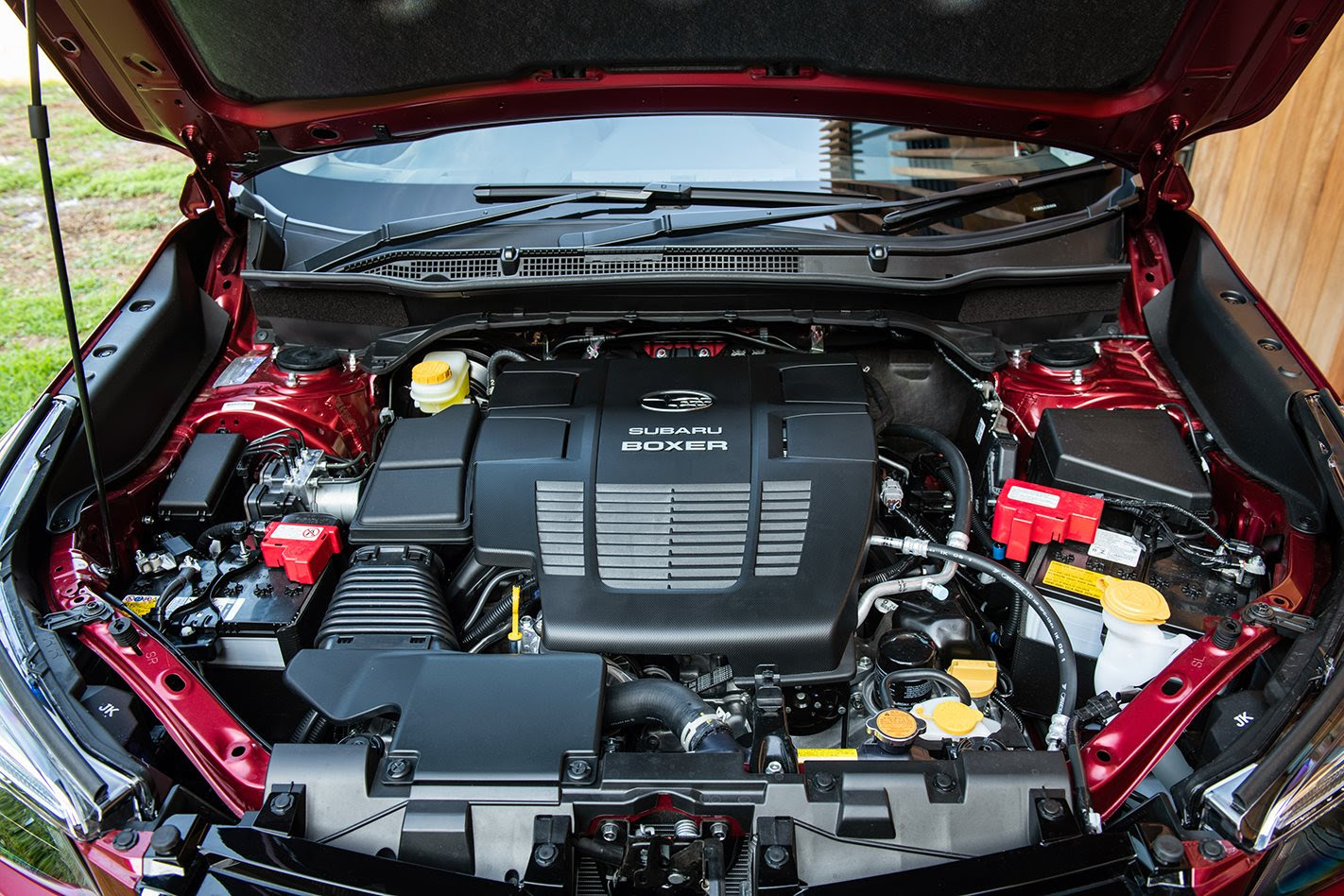 It has an official fuel economy rating of 7.4L/100km for combined urban and country driving, which is quite frugal for a non-turbocharged mid-sized SUV.

Also worth noting is that fuel consumption is just 0.7L/100km more than the lesser-powered 2.0-litre Hybrid Foresters, which in my opinion aren’t worth the additional outlay.

Foresters require servicing every 12 months or 12,500km, whichever occurs first, with reduced fixed pricing if you select a three or five-year service plan that cost $1269.15 and $2413.63 respectively. The five-year plan includes the major ‘D’ service that costs $794.17.

All Subaru Foresters are covered by the brand’s five-year, unlimited-kilometre warranty.

What is the Subaru Forester 2.5i Sport like to live drive?

The 2.5-litre Boxer engine is in its happy place when cruising. It feels smooth and is reasonably responsive but can struggle a little when fully loaded with cargo and passengers.

Performance is enhanced by ‘Subaru Intelligent Drive’ that offers two driving modes including Sport that changes the gearbox settings to upshift at higher revs for quicker take-off acceleration. Even then, the CVT automatic gearbox isn’t as revvy as other such units as it uses synthesised steps to feel more like a conventional torque-converter automatic.

Because the ‘Boxer’ engine’s four cylinders are laid flat, there is a reduced centre of gravity that, along with excellent steering and chassis compliance, helps achieve an excellent balance between ride comfort and handling without having to stiffen the suspension.

The result is an incredibly smooth ride on most road surfaces. The Forester’s all-wheel-drive system and 220mm ground clearance gives it better off-road capability than most SUVs too. It is excellent on gravel roads and handles sand well, and you can negotiate very steep and slippery terrain with the help of the X-Mode traction system.

How safe is the Subaru Forester 2.5i Sport?

The Forester has one of the better active safety systems in its price range in the form Subaru’s ‘EyeSight’ package that relies on stereo cameras. It brings AEB, which works at city and highway speeds and detects pedestrians, warning you first and then braking automatically to prevent or mitigate the impact if a collision seems imminent.

EyeSight also supplies adaptive cruise control, lane-keeping assist, brake light recognition that provides an additional sign that the car in front is stopping, and lane-drift assistance – alerting you if you start to drift out of your lane on the highway, perhaps from distraction, and gently attempting to steer the car out of trouble.

Other active safety features include blind-spot monitoring and rear-cross traffic alert. The Forester takes the latter a step further with reverse automatic braking that stops the vehicle to help prevent collisions while parking or when backing out of a driveway. 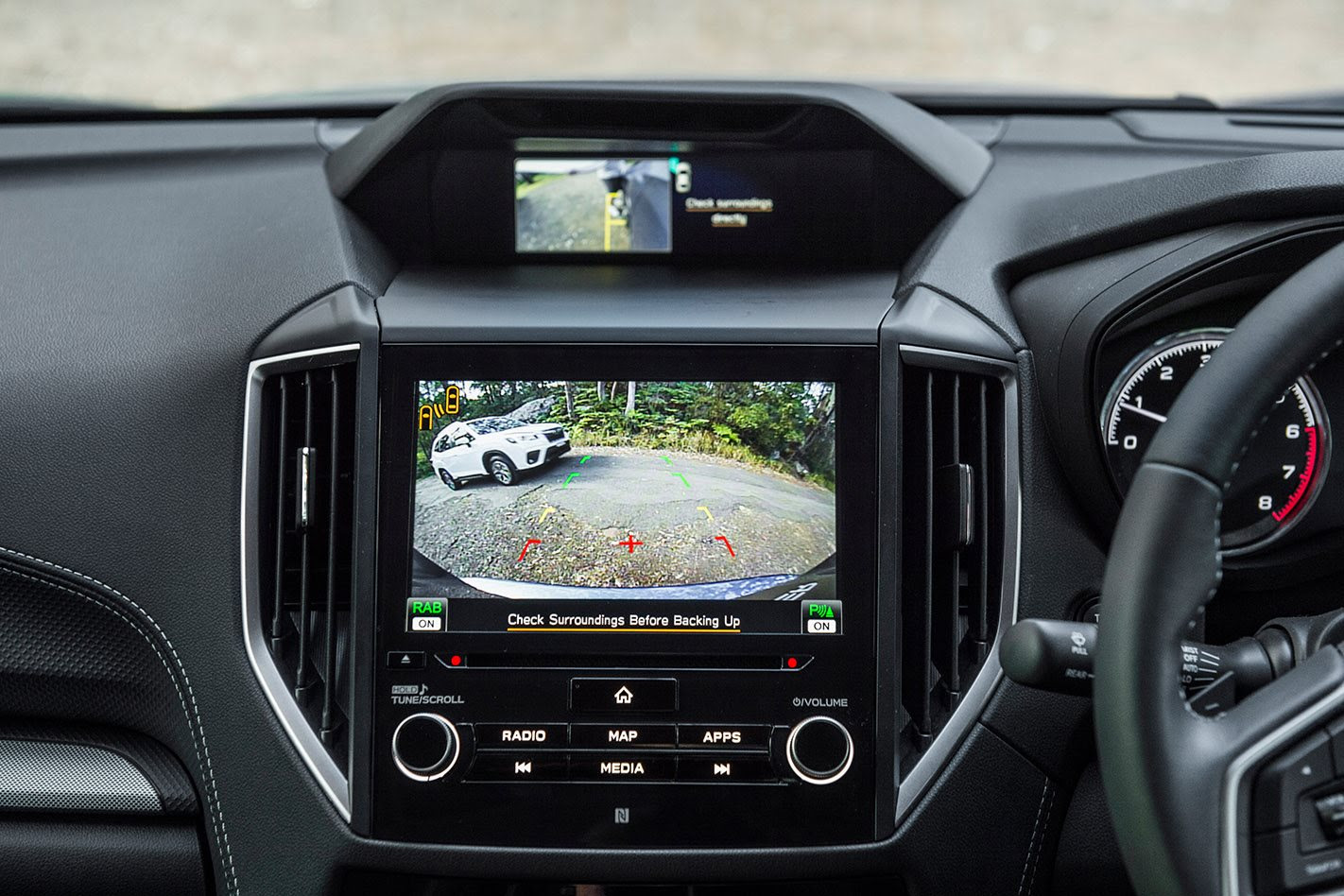 A passenger-side mirror that dips to allow you to see the kerb or hidden obstacles is also a great help when reversing in tight spots (especially as you don’t want to scuff those black alloy wheels) and likewise the reversing camera with guidelines and front-view monitor.

The Forester also employs facial recognition technology to detect if the driver takes their eyes off the road or is becoming drowsy.

Another feature, new to the 2021 Forester range, is the ‘collision detection unlock’ function that unlocks the doors and tailgate in the event of a heavy collision, reducing the possibility of occupants being trapped in the vehicle.

The new-kid on the Forester block offers excellent value. Until now, we considered the Forester 2.5i Premium to be the sweet-spot of the range, coming with most of the important features available in the pricier 2.5i-S.

The 2.5i Sport comes will all the Premium’s features and then some for just $1500 extra, which certainly gives it bragging rights as the new pick of the Forester bunch. At just under $42,000 before on-roads you get plenty of medium SUV for the price, and it compares very well against similarly powered AWD medium-SUV rivals such as the Mazda CX-5 Touring, Nissan X-Trail ST-L and the pricier RAV4 Edge.