Assumptions are fraught with danger. When presented with a one-or-the-other choice, often the option you think is a no-brainer could, in fact, garner the complete opposite response from someone else.

Hence when the updated fourth generation Hyundai Santa Fe launched at the tail end of 2020 sans V6 petrol power, it didn’t present as an issue for some. That’s because, in terms of frugality and driveability at least, the 2.2-litre four-cylinder turbo diesel is the better choice.

However, after conversations with punters looking to buy in this segment, momentum started to build a case against the torque-laden oiler and for the 3.5-litre V6. The most robust argument point centres around the diesel particulate filter (DPF) and the fact that, while the Santa Fe is an SUV, its main kid-hauling duties will see the seven-seater largely resigned to the school run.

And that’s not conducive to a long stint in the country, something the DPF needs regularly to cleanse. Monetary concerns also come into play, with the R Series diesel costing more to initially purchase and service. Admission rises by $3500 for the all-wheel-drive turbo diesel in every spec bar the Highlander, which increases by $4200.

The V6 will also accept cheaper 91RON fuel and, at $399 per service for the first five years (12month/15,000km intervals), its $60 less expensive each time you visit your local Hyundai dealer. The brand’s five-year, unlimited-kilometre warranty also applies.

MORE – Which manufacturers have the longest warranties?

A rather nondescript design has been revamped with striking details, big wheels and a cascading grille flanked by stacked headlights. At the back, an in vogue tail-light bar connects LED brake lights. Sounds like music to the ears of family buyers, then, with ample room for heads, shoulders, knees and toes. The sliding middle row gains 39mm of legroom (the backrest can also recline), while both the middle and third rows fold for a flat load area. Speaking of cargo capacity, it has increased from 547 litres to 571-782 litres (depending on the position of the sliding middle pews) in five-seat configuration or 130 litres with all seats in place.

A commodious 1649 litres is available with all but the driver and front passenger’s seat stowed. There’s a provision for the cargo cover beneath the boot floor, while the full-size alloy spare wheel is located under the chassis. However, the cabin isn’t only roomier, it’s also received a new look. Premium, quality and upmarket are all apt adjectives with myriad plush materials making it a nice place to be.

Fit and finish also feels solid and the Cognac Brown leather adds visual appeal to our test car. General ergonomics are well thought out and NVH levels are reasonably low in the insulated cabin.

However, if you don’t want to wake the kiddies in the back, Quiet mode cancels the rear speakers and limits the speaker volume up front to allow passengers some sleep. Although a design misstep has to be the control-wheel-style drive-mode selector, which has been made a focal point of the overhauled centre console that is now without a traditional gear selector.

Given how infrequently the selector will be used, especially without much off-road capability, it strikes out as an odd decision.

There are also four blanked-out buttons which are used for the seat heating/cooling controls, but they’re only fitted to the Highlander – as is the cool ambient lighting with 64 different colours to choose from. 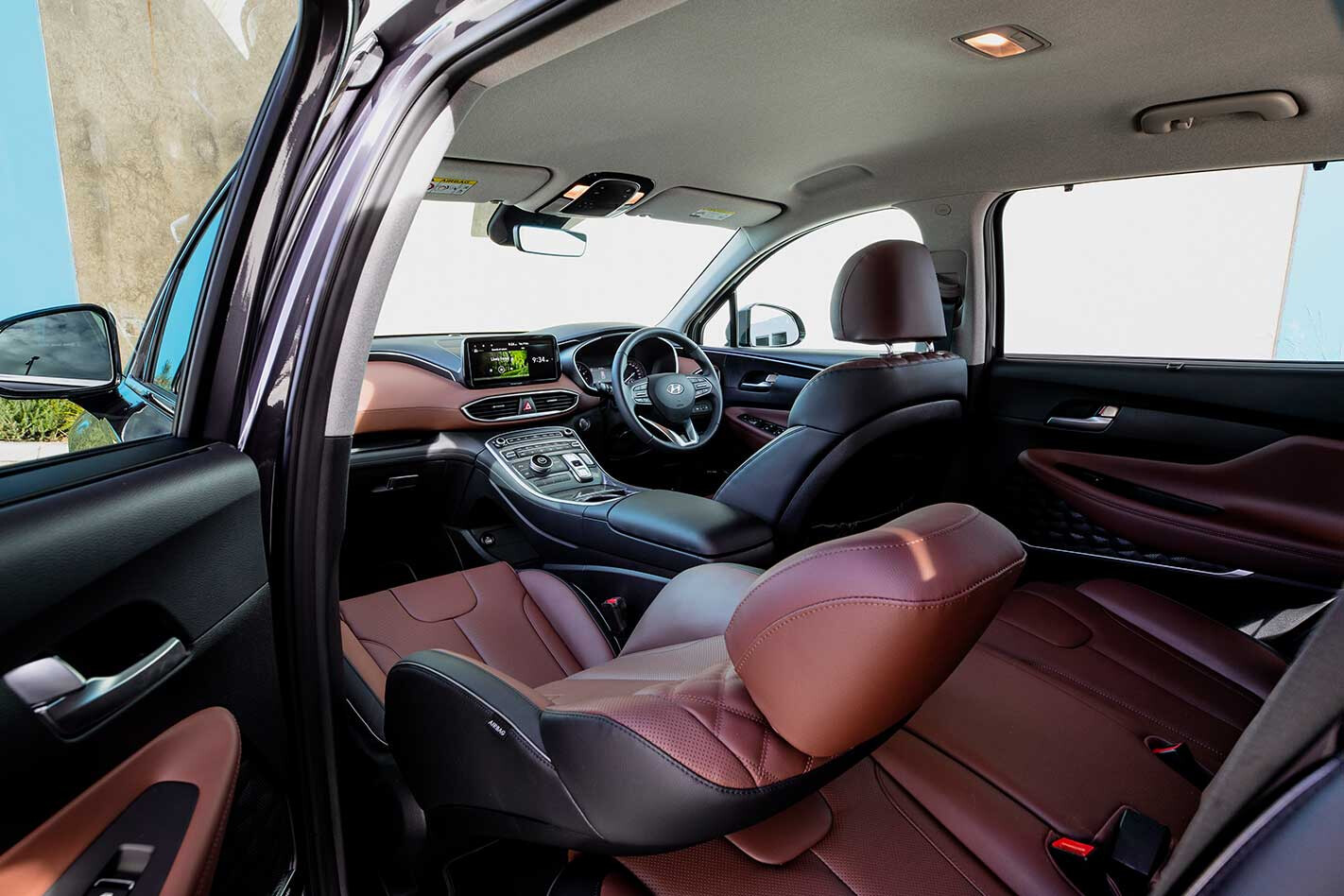 Infotainment receives an upgrade, too, with the Elite and Highlander gaining a 10.25-inch touchscreen while the base model and Active receive a smaller 8.0-inch unit.

It’s an intuitive system with attractive graphics, while the screen quick to react to inputs. Only the Highlander gets the 12.3-inch LCD instrument cluster, which displays the Blind-Spot View Monitor technology and utilises virtual dials in an array of configurations.

There’s an array of USB ports and 12V power outlets throughout the cabin, while even the rearmost row has its own climate controls (and buttons to stow seating).

Rather annoyingly, while the smaller 8.0-inch screen offers wireless Apple CarPlay and Android Auto (like the updated i30 and Kona), the larger display fitted to the two range-topping variants does not – it’s wired. Wireless Qi smartphone charging is standard on all Santa Fes.

In terms of safety, the revised Santa Fe achieves a five-star ANCAP rating – which is carried over from the fourth generation. 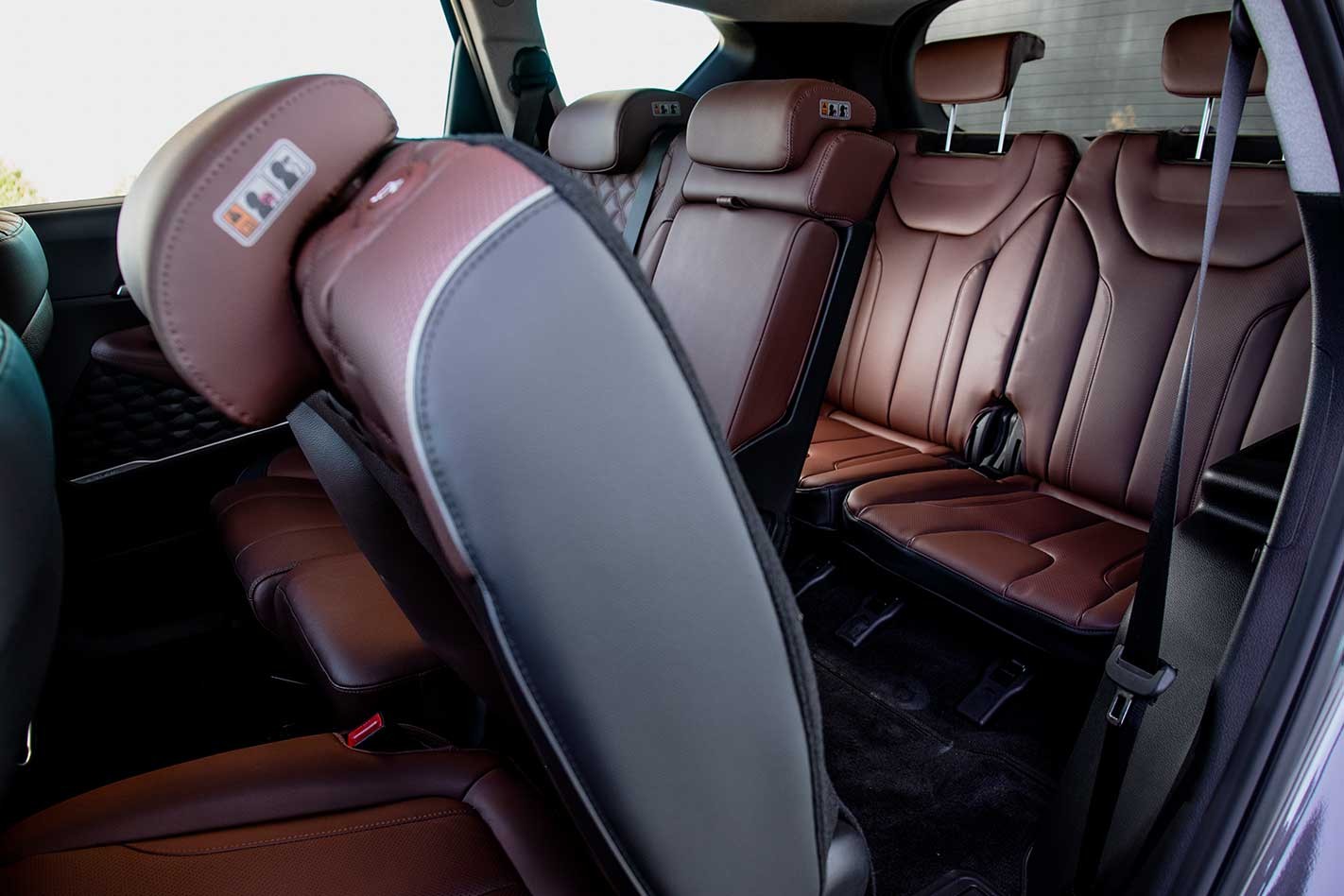 As a part of Hyundai’s SmartSense safety suite, which is fitted as standard, the Elite is packed with tech such as Forward Collision Avoidance Assist with Junction Turning, Driver Attention Warning and Blind Sport Collision Avoidance.

While the pragmatic qualities of the Santa Fe feature no matter what engine you choose, it’s the updated Lambda II petrol V6 in the spotlight here. It falls under Hyundai’s SmartStream family and the 3470cc unit has seen a reduction in weight and internal friction losses due to the use of an alloy head and block – mid-range power and an increase in driveability being the desired outcome.

Its 200kW and 331Nm is sent to the front wheels alone via an in-house eight-speed torque-converter automatic (the diesel uses a new eight-speed dual-clutch gearbox).

On paper those figures would suggest spirited performance. However, both peak power and torque are developed high in the rev range, 6400 and 5000rpm respectively, meaning you need a strong prod of the accelerator to gain meaningful progress. And while it generates a surprisingly pleasing tune doing so, it only hurts the already thirsty 10.5L/100km combined fuel consumption (we saw 11.2L/100km on test).

To this end, the diesel makes more sense for CBD driving in both raw figures and performance. While it might produce just 148kW, its 440Nm of torque is delivered in a meaty 1750-2750rpm mid-range and hauls the circa 1800kg mass effortlessly.

Dynamically the Santa Fe V6 Elite acquits itself well with confidence-inspiring handling, thanks largely to the impressive body control (for an SUV) as a result of the monocoque construction. The steering is vague and light, however, the latter is appreciated in car parks. The brakes (325mm ventilated discs front, 305mm solid discs rear) offer decent feel though the pedal.

What doesn’t work is the front-wheel-drive layout as the V6 all too easily produces wheelspin off the line and falls foul to torque steer when throttle and lock is applied concurrently. At speed this isn’t an issue and the fact power isn’t being sent to the rear axle is unlikely to even register with most buyers.

The new N3 platform, which is shared with the latest Kia Sorento, houses MacPherson struts up front and multi-link suspension at the back.

Paired with passive dampers, the setup delivers commendable control on rebound. The Elite V6 doesn’t bobble after mid-corner bumps and generally remains composed without much head toss despite the tall frame. However, there’s a price to pay for the stylish 20 x 8.5-inch alloy wheels – and that’s low-speed ride quality. It’s never harsh, crashy or uncomfortable, but sharp potholes can be felt from within the cabin.

Both powertrains are endowed with a 2500kg towing capacity and a maximum of 200kg towball weight.

Ground clearance sits at 176mm, but without all-wheel drive or dedicated off-road modes, a smooth dirt track to camping grounds is about all the Santa Fe V6 Elite will be tasked with – especially given the design of the big wheels, which are wrapped in road-focused 255/45 rubber. It’s a shame Hyundai can’t make its HTRAC all-wheel-drive system work with the V6 for right-hand-drive applications as such a variant would be a compelling option for many buyers in the market – just look at the success of the Toyota Kluger.

However, there is a third way. A hybrid powertrain is imminent (second half of this year) for the Santa Fe, with a 1.6-litre four-cylinder turbo petrol engine pairing with an electric motor and battery pack – the former powering the front axle and that latter the rear to effectively create all-wheel drive. Combined power and torque is expected to be around 169kW/350Nm. Still, both the current powertrains generate valid cases and only add to the compelling Santa Fe package when cross-shopped with the likes of the Kia Sorento, Mazda CX-9 and Toyota Kluger.

The Elite V6 occupies a happy middle-to-high ground within the lineup where you receive all the design/spec elements you want, paired with the cheaper bent six. It’s safe to assume that this seven-seat SUV should be on all shopping lists.