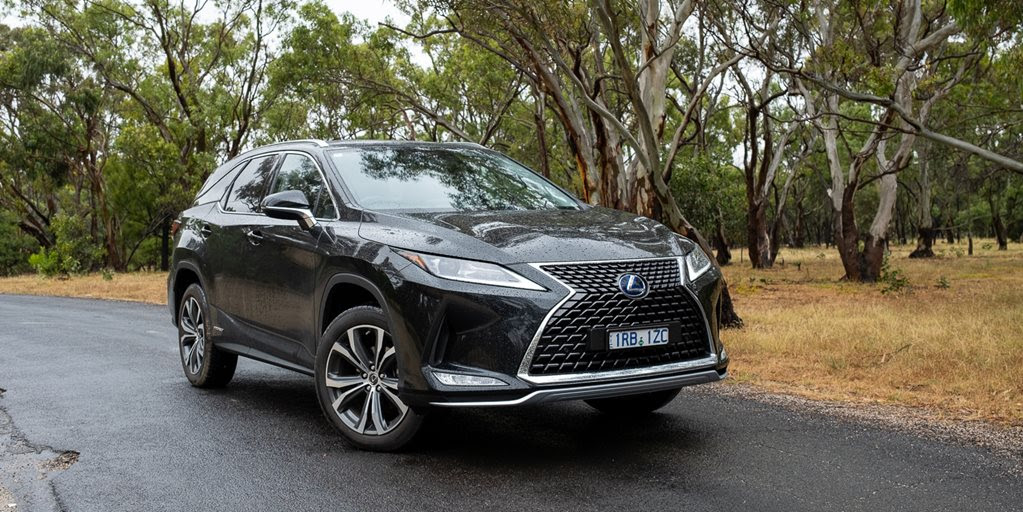 A luxury prestige hybrid SUV that delivers what you expect?

Like most SUV categories on sale in Australia, there’s no shortage of choice in the large premium SUV segment.

The Lexus RX trades in this space, and while not representing the traditional German brand of luxury that many flock to for high-riding grandeur, the Lexus RX still trades punches in the sales race amongst the BMW X5, 2019 Mercedes GLE-Class and Audi Q7. 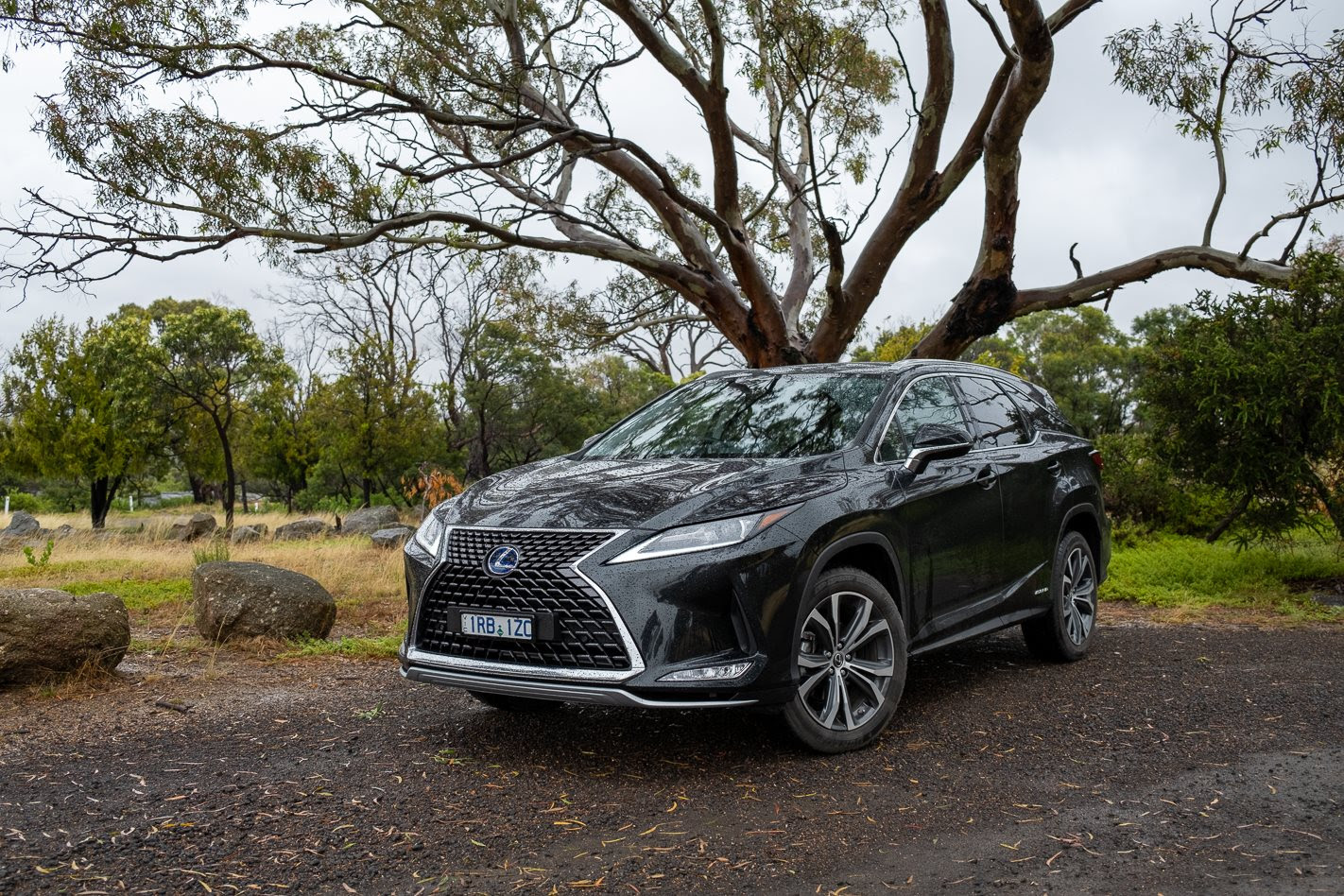 It finished 2020 as the third best-seller in its segment, beaten by the Mercedes GLE and BMW X5.

It’s a respectable result, considering it jumped from sixth best-selling the year before, but what’s the drive behind the come-from-behind strong sales showing?

The allure of reliability and serviceability might have something to do with it or the fact that it’s one of just a few premium large SUVs to offer seven seats.

It also received a light refresh in 2020 which saw technical and mechanical upgrades applied to the five-year-old platform.

With this in mind, I saddled up …  for testing the Lexus RX450hL Luxury over the holiday break to find out what this German alternative offers premium SUV buyers. 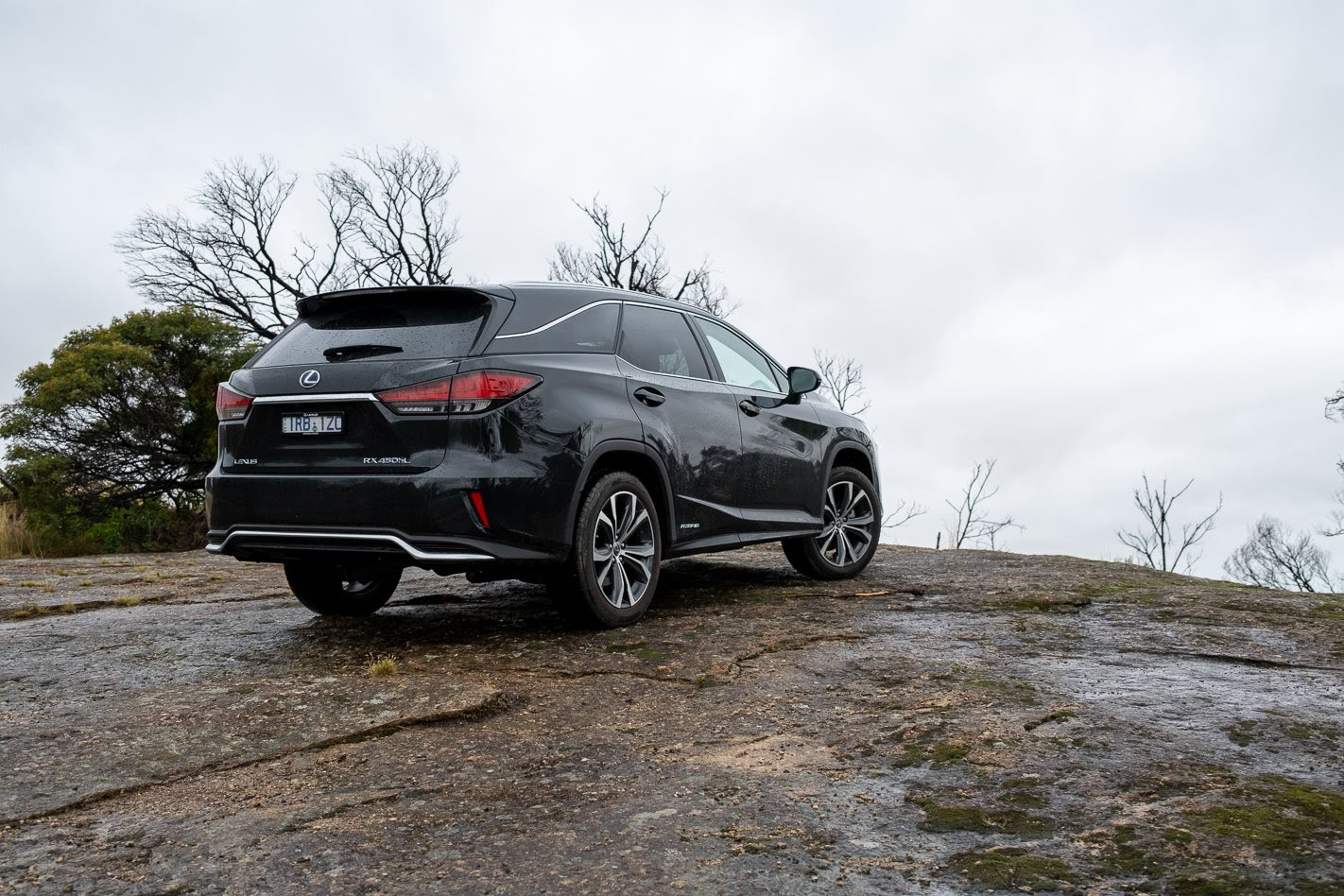 The Lexus RX SUV range is expansive. Not only is there a choice of three engines, but each engine variant can also be had with a choice of three trim levels and the two more expensive powertrains can be had in seven-seat guise.

Our tester is an RX450hL Luxury, the seven-seat version of the high-end powertrain. With Luxury trim level (which is standard), this car is $95,888 (before on-road costs). 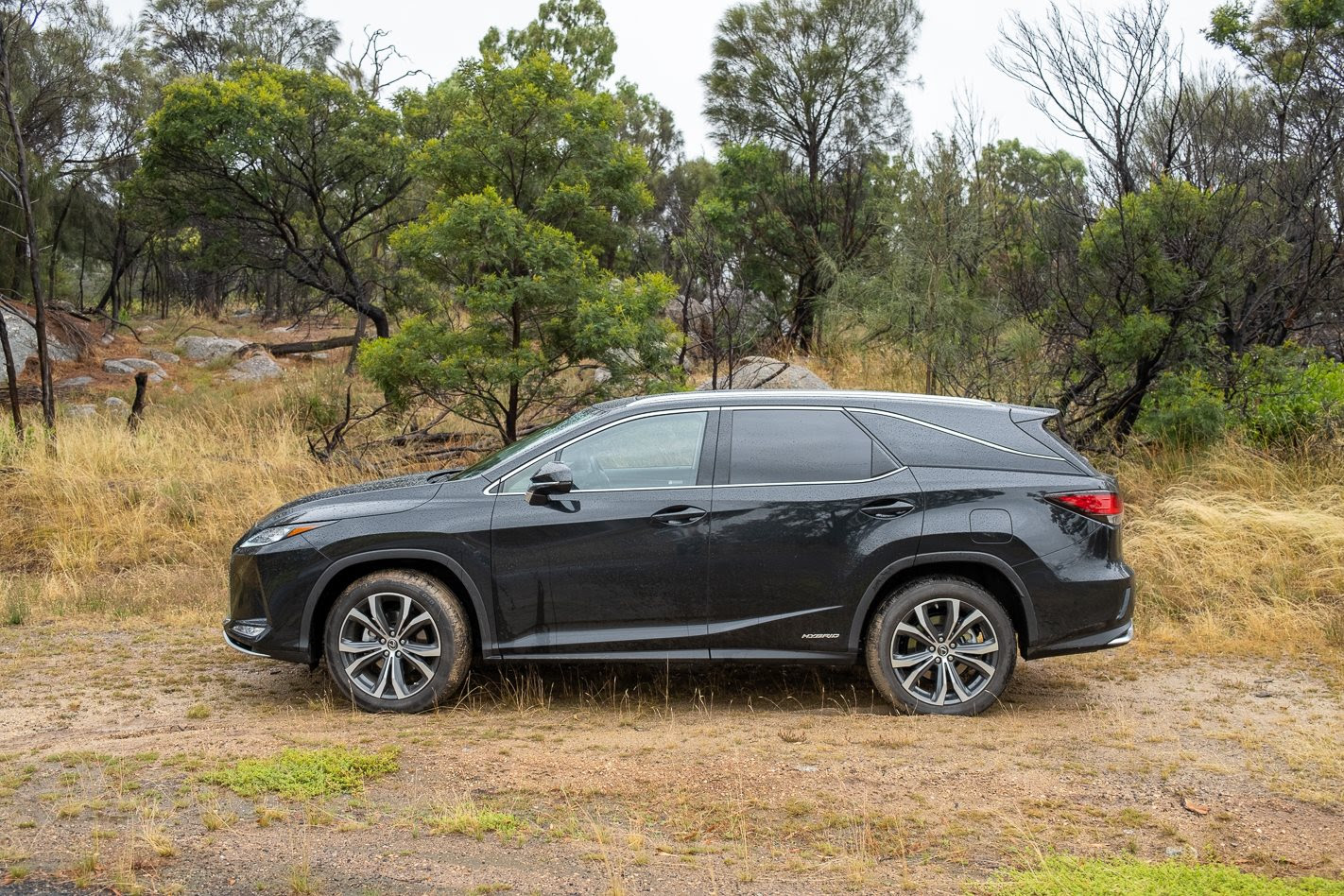 Considering the range begins at just over $70,000 and stretches to over $110,000, the RX450hL is in the upper-middle segment of Lexus’ pricing scheme.

Getting down to the nitty-gritty, our car also had a $3500 enhancement pack (which adds a sunroof and colour head-up display) and $1500 Graphite Black paint which pushed it to a $100,888 (before ORCs) as-tested price.

It misses out on items like adaptive sports suspension, panoramic parking cameras, 15-speaker Mark Levinson sound system and wood trim inserts which are all reserved for the Sports Luxury trim grade. 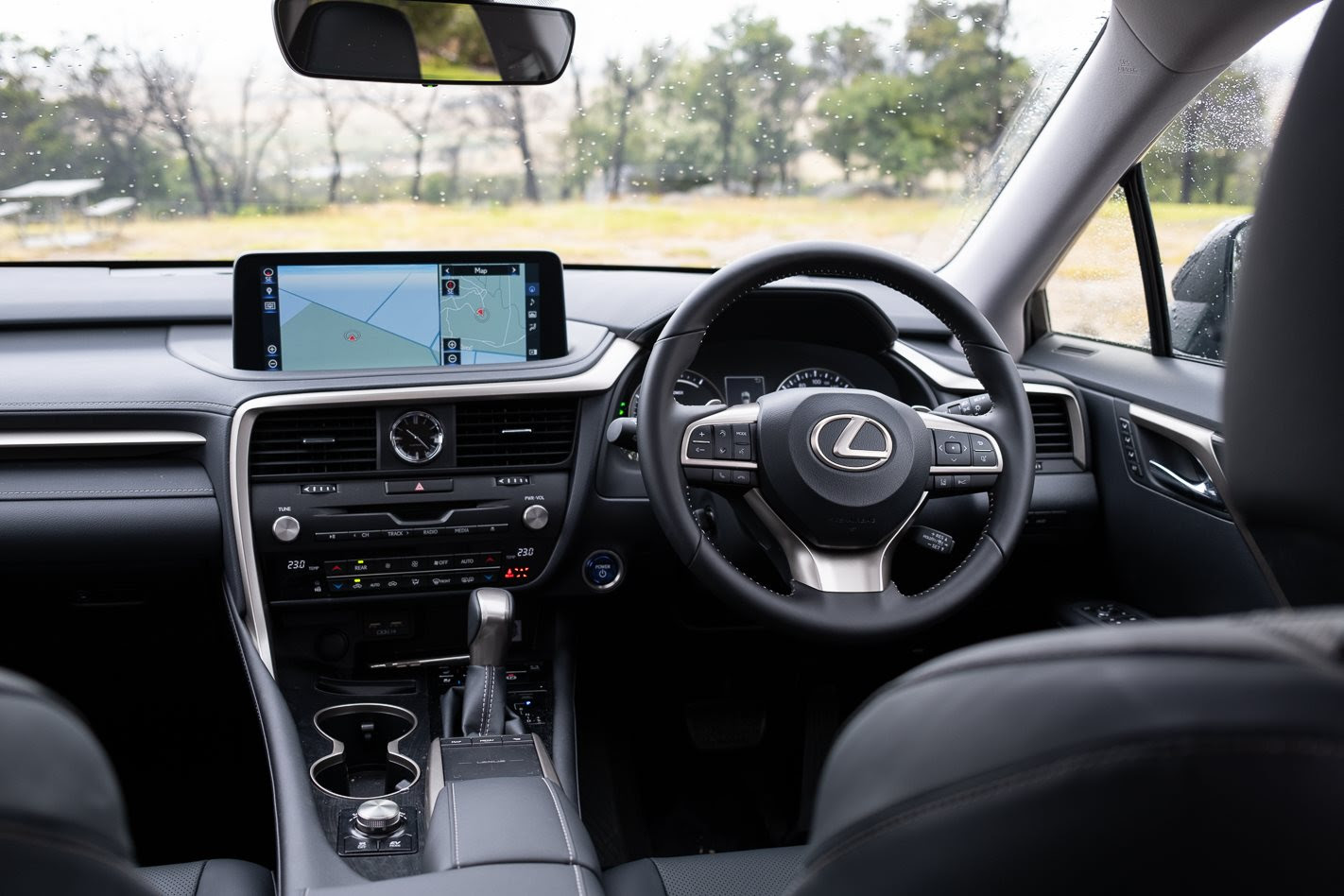 Power is drawn from a 3.5-litre hybrid six-cylinder engine, the most powerful of three petrol engines options for the RX range.

That engine sees it priced well into premium territory, though few others can claim hybrid powertrains for a comparable price. 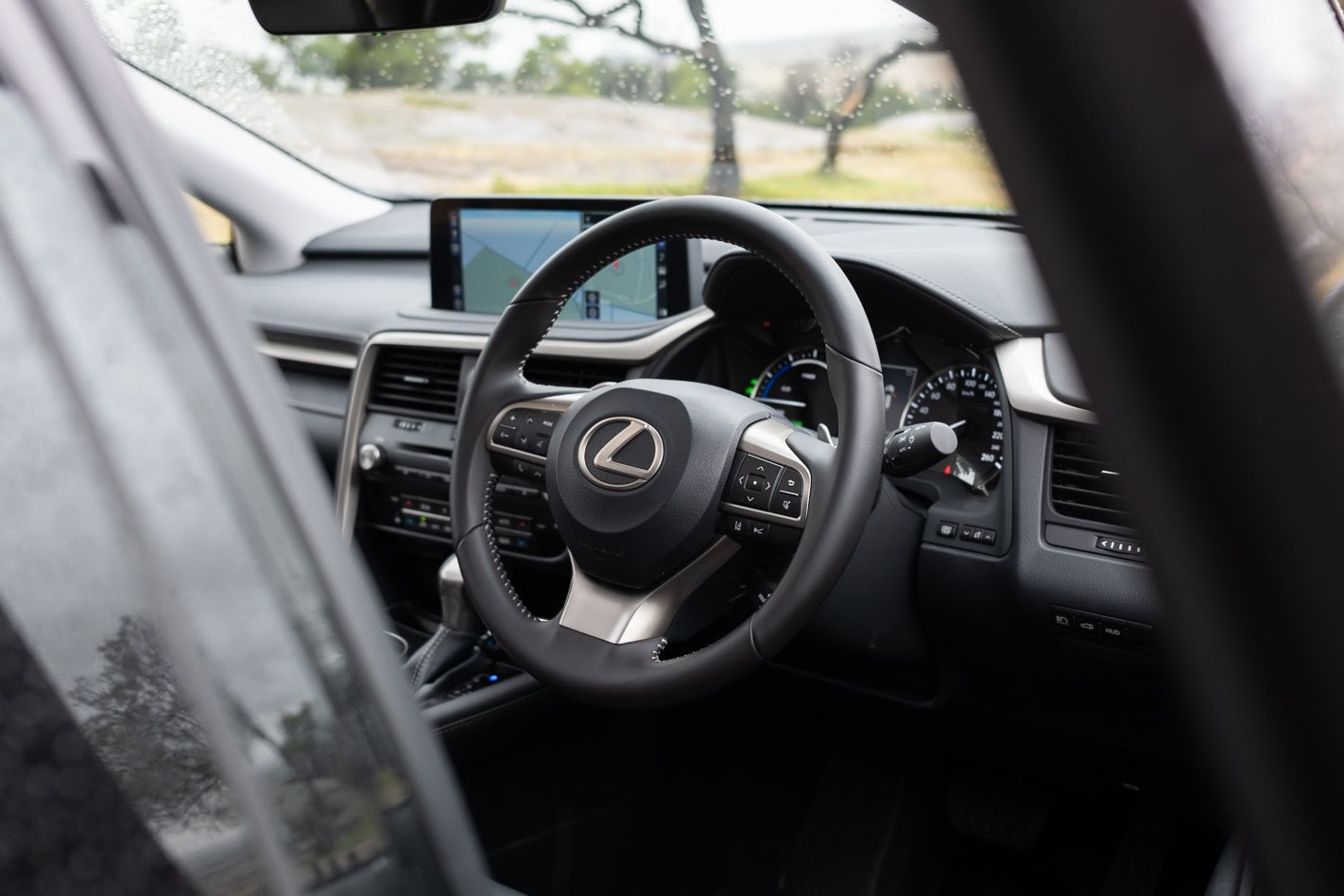 Living with the Lexus RX450hL

The lasting impression that I am left with after spending time in the RX450hL is one of supreme comfort.

In this tester’s opinion, Lexus does some of the best standard specification seats in the automotive business and the RX450hL was no exception.

The seats are soft and supportive (even on long journeys), the carpet is thick and plush, and electric-adjustment convenience for the seats and steering wheel made re-acclimatising to the big SUV a breeze. 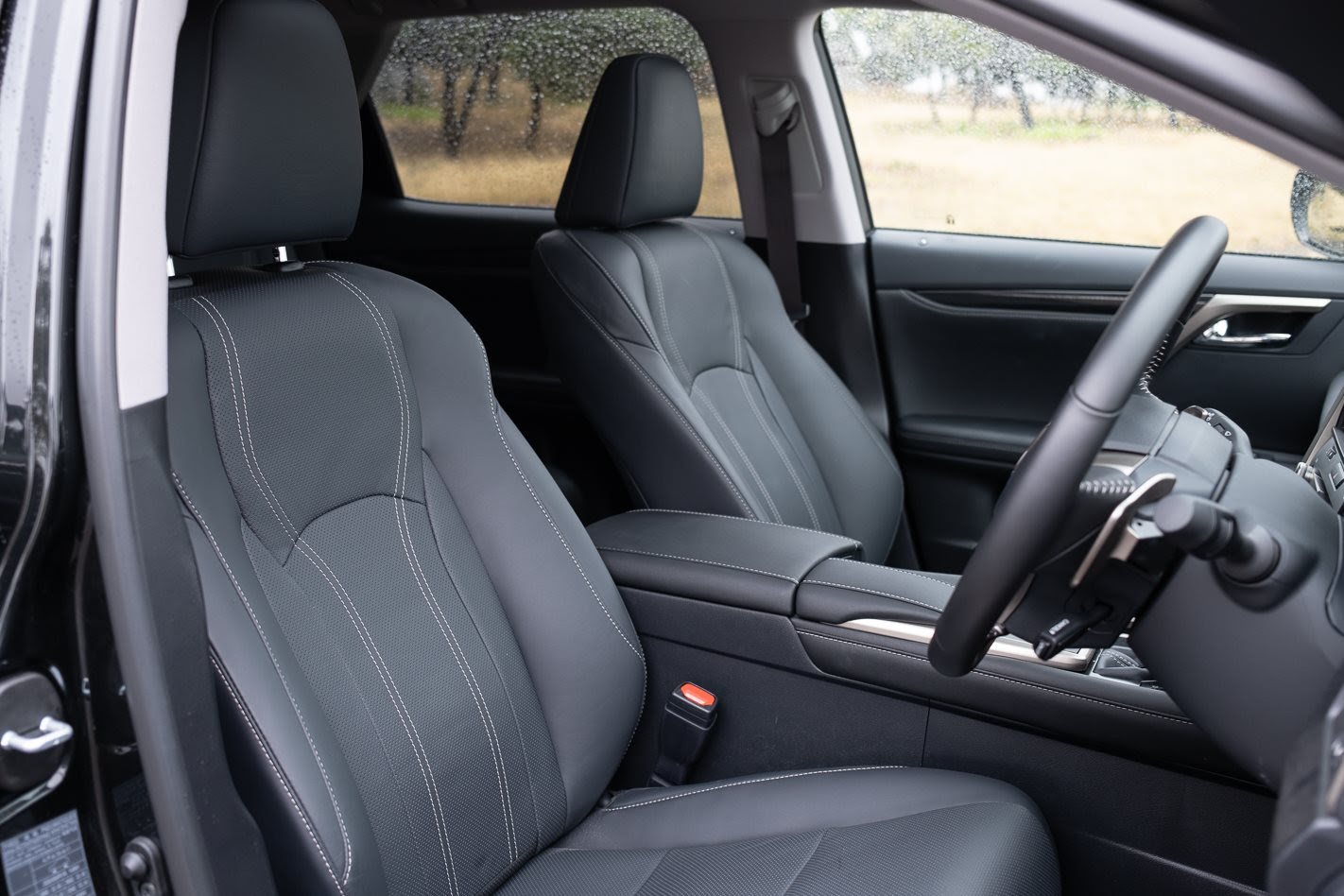 So too, the seats’ ventilation/heating feature are a welcome inclusion for summertime road trips, and the extensive tri-zone climate control system (which third-row seaters can control for themselves) keep the cabin comfortable at the requested temperature.

The cabin stocks a number of storage spots; door bins extend for larger bottles, two cupholders in the centre console are handy for keys and wallets and there’s a wireless charging tray aft of the shifter.

There’s also an upright cushioned slot for your phone next to the shifter. 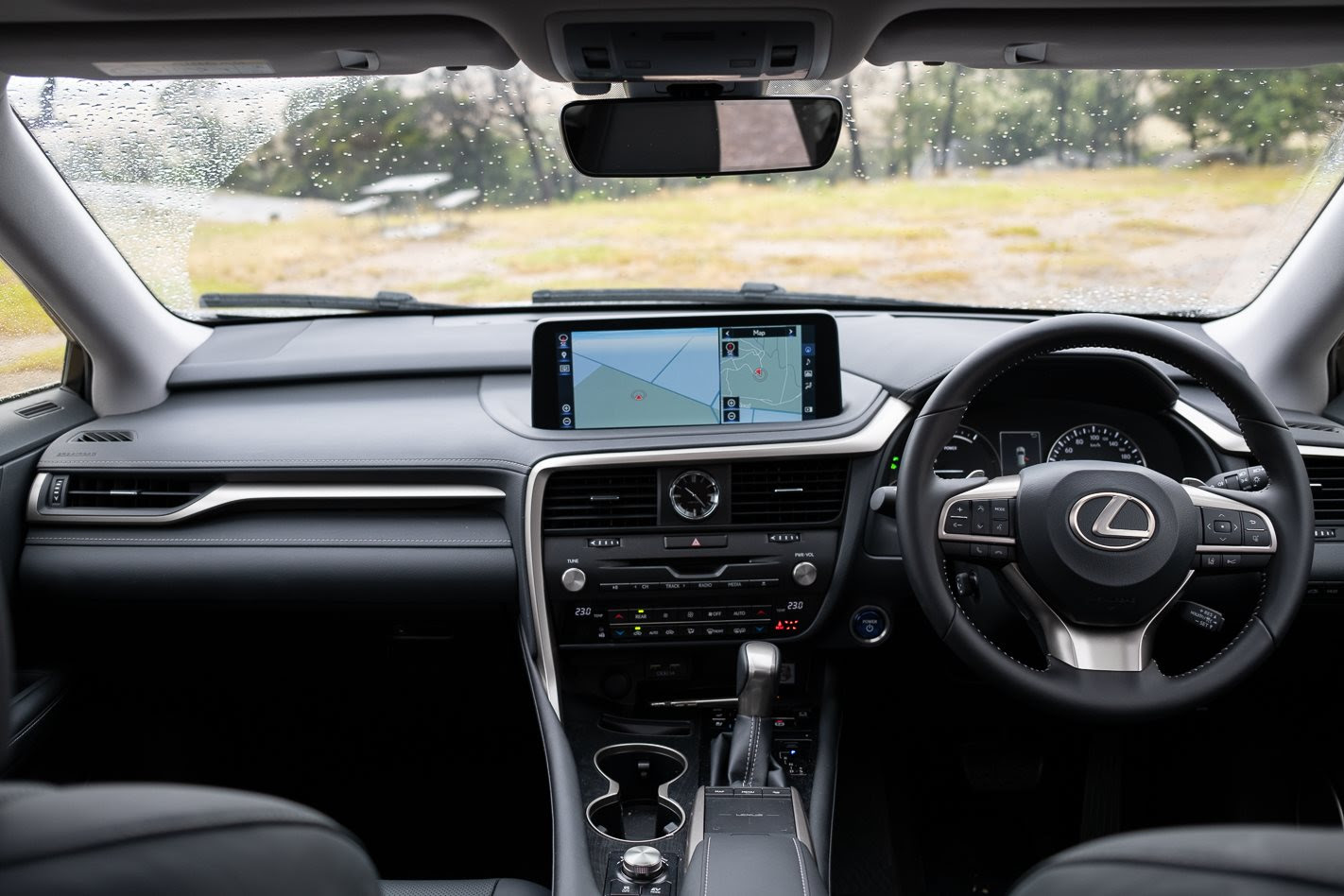 A lot of criticism is thrown Lexus’ way for its persistence with its touchpad-controller which guides the 12.3-inch infotainment screen.

It’s not the most intuitive system to use, especially while trying to change radio stations while on the move, for example, though you do get used to the controls in time.

If it does turn into a bugbear, rest assured that the screen is now touch-sensitive, which comes in handy to control Apple CarPlay and Android Auto.

The 12-speaker sound system paired to the infotainment system was adequate, though I would kick myself for not getting the fantastic Mark Levinson 15-speaker system – which only comes as part of the more expensive Sports Luxury model grade. There’s a wide view and narrow view reversing camera to help guide you backwards, but both are low-resolution displays which is a shame to see on a high-end product.

Surround-view 360-degree cameras are available, but only on higher-spec cars. Space-wise, there’s a great amount of room in the first row with enough adjustment to get a good, high driving position.

On that, vision is great from the driver’s seat, with enough glass around to comfortably see out in order to guide the big car in town.

Second-row passengers are also well-catered to. The seats fold in a 60/40 fashion and slide back and forward as such; but there’s also good foot, head and knee room across the second bench. 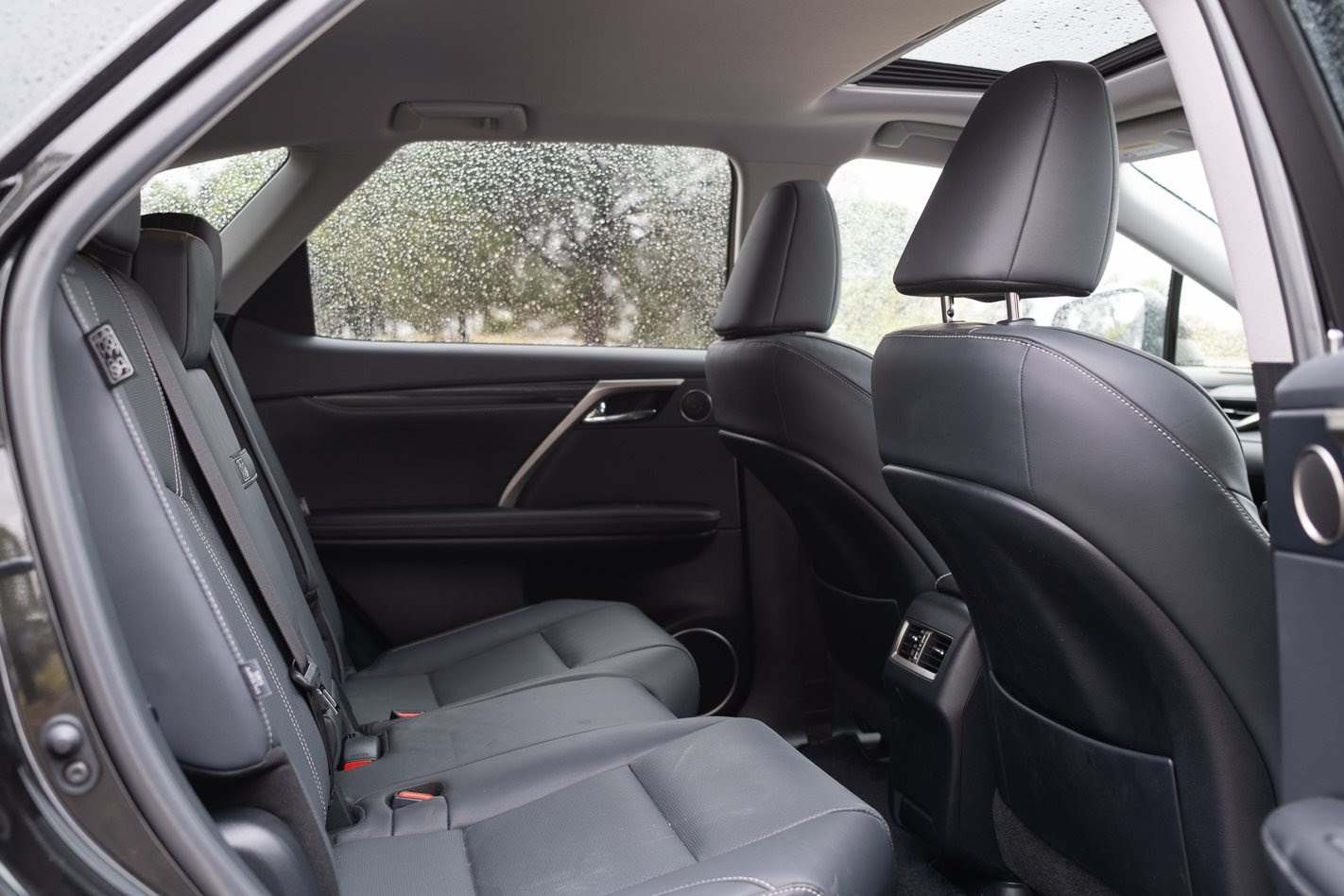 Getting into the third row is a bit tricky for taller adults – the experience is best reserved for kids or your least-liked adults.

It’s better described as a five-plus-two seating arrangement, only reserved for the odd occasion where capacity exceeds five.

The roof is sculpted for decent headroom, but knee space is tight and you’re unlikely to fit without moving the second row forward.

With the third row up, there’s still a good-sized 176 litres of boot space for a couple of backpacks. Put the third row down and that number grows to 432 litres.

This space can be accessed through a power-operated boot which can be opened with a wave of your foot under the bumper, but I could never make it work and ended up looking a fool in front of friends. 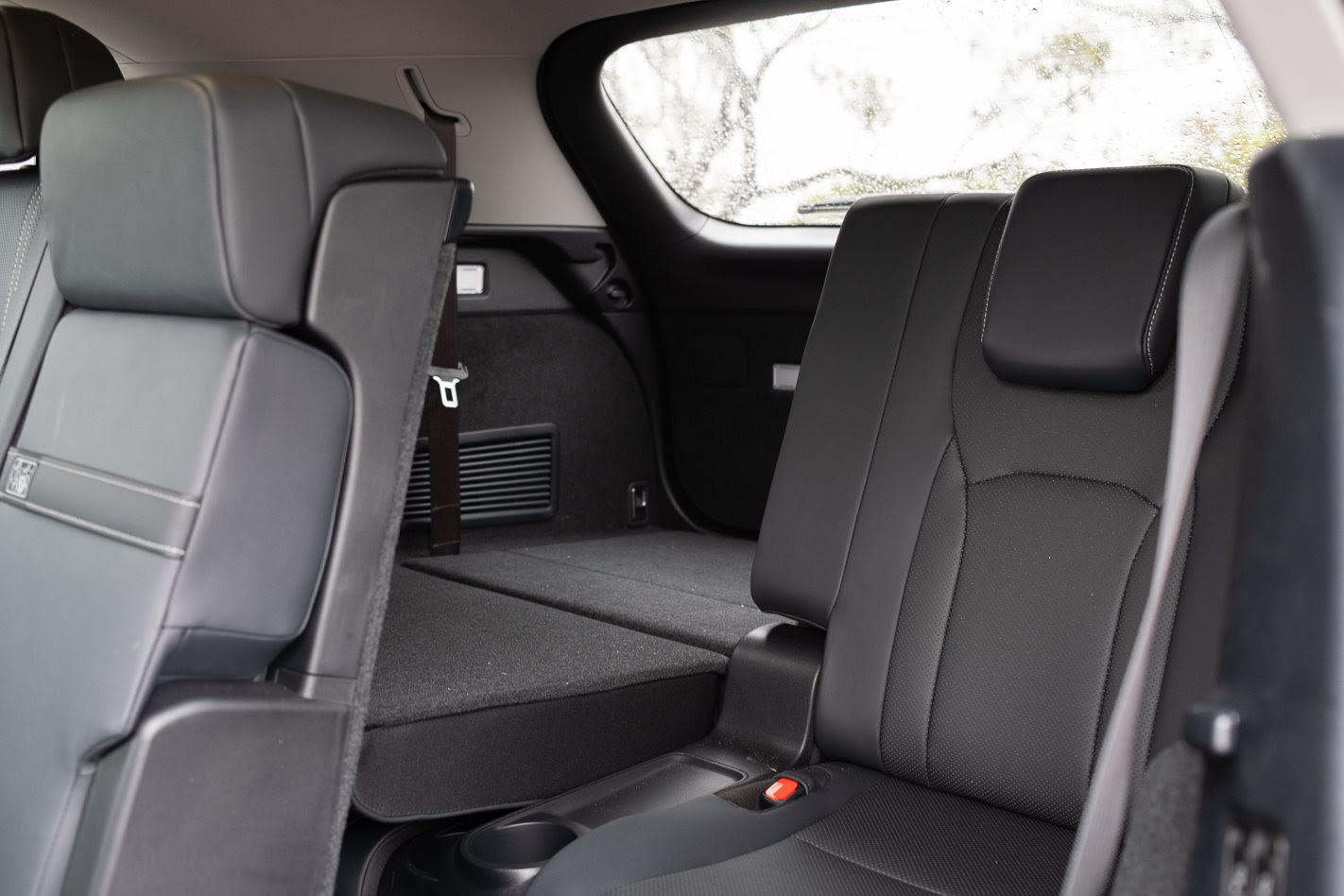 On the whole, the cabin is a well-equipped and comfortable place to spend time whether it’s a long trip or short city jaunt.

While there’s little in the way of thrills, such as accented trim or ambient lighting, the materials used throughout are pliant and yet hard-wearing.

As the most economical Lexus RX, the 450h features a 3.5-litre V6 hybrid engine with a 650-volt battery system and twin electric motors. Collectively, it outputs a combined 230kW/335Nm.

Power is sent through a continuously variable transmission (CVT) which has six stepped ratios (can be changed via paddle shifters) and traction is handled through a part-time all-wheel-drive system which favours the front axle. 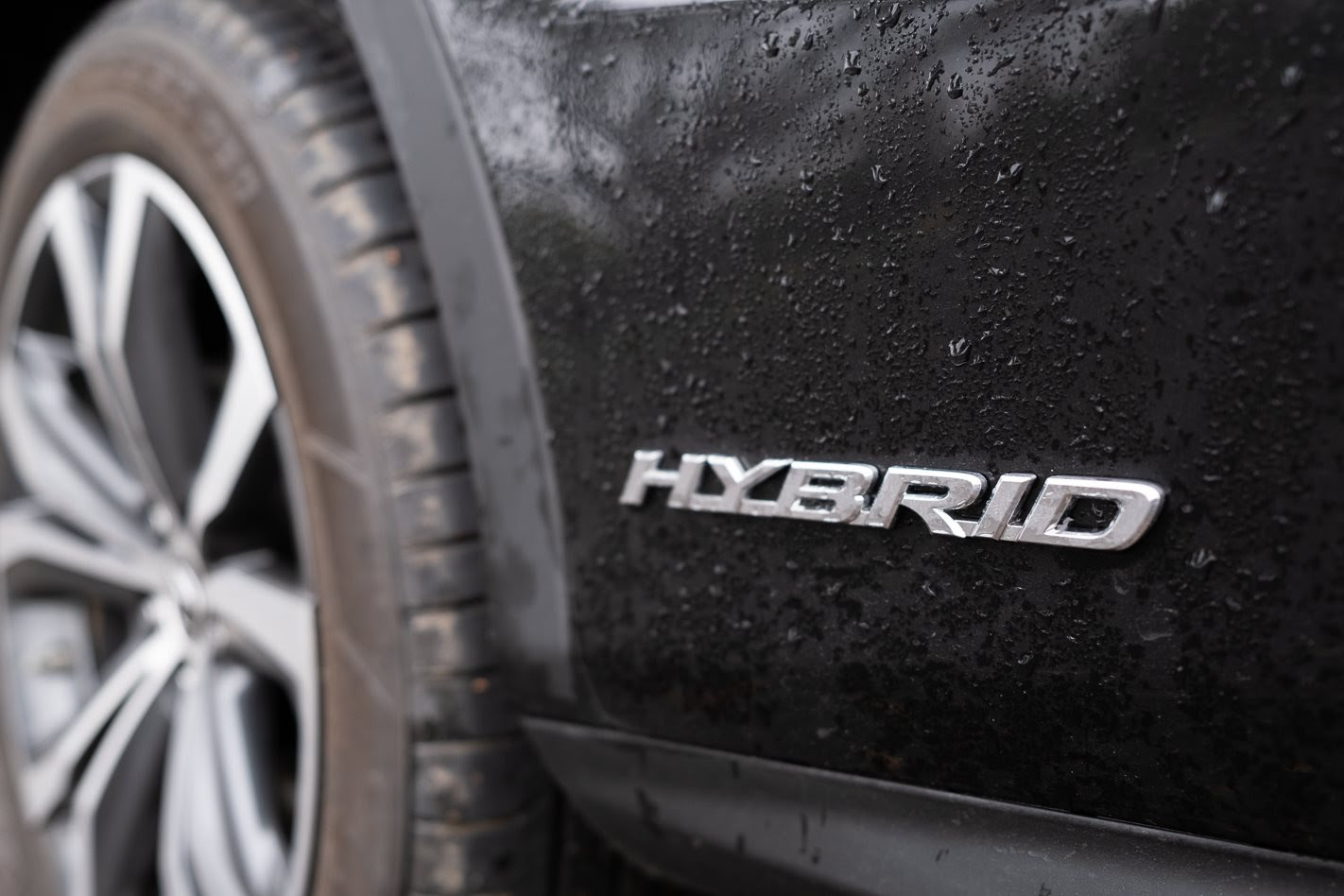 Lexus says the RX450hL will return a combined fuel consumption figure of 6.0L/100km in an ideal scenario, though I never saw less than 8.2L/100km.

This is still a respectable result, but carting around a hefty 2235kg (tare) of weight does take its toll.

Despite the most-powerful 230kW/335Nm powertrain, that weight does make itself known when driving the RX450hL.

It’s not a particularly slow car – it can run from zero to 100km/h in 7.7 seconds – but after an initial off-the-line kick thanks immediate electric torque, it does run out of puff when you need to accelerate up to speed. 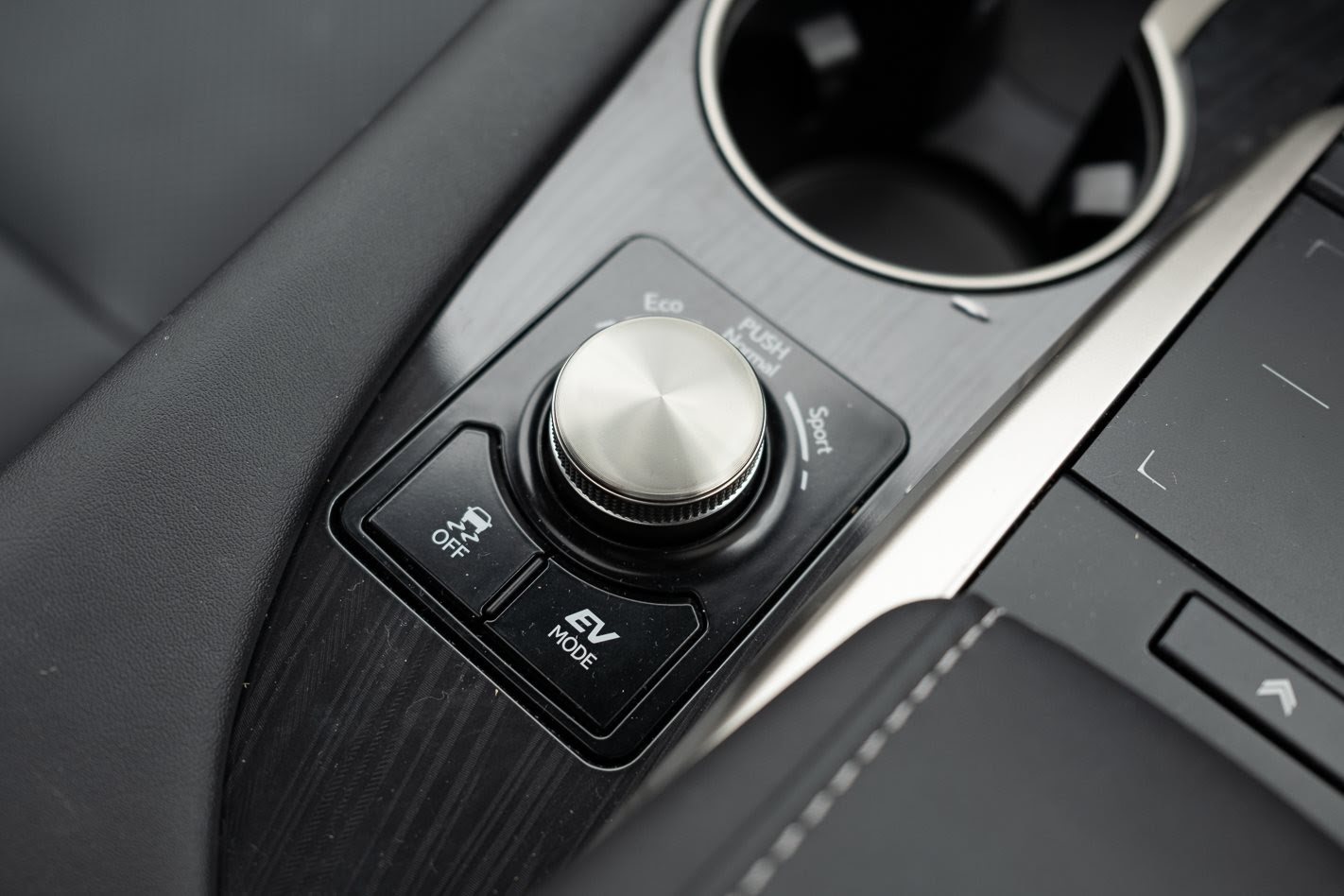 This is most commonly felt when overtaking on a freeway or merging, an annoyance I became accustomed to when driving down the M1 freeway towards the Victorian Surf Coast.

While the naturally-aspirated RX350 isn’t as powerful as the hybrid RX450h, crucially, the 350 feels faster because of its 370Nm torque figure.

Its fuel-saving benefits notwithstanding, the powertrain does feel somewhat underdone for a large seven-seat premium SUV. It stings when a number of competitors use turbocharged technology, too.

That said, its naturally-aspirated/CVT combo does make it exceptionally smooth to drive.

The transition from electric to petrol power is unnoticeable and it pulls you comfortably up to speed, as one would expect from a Lexus. 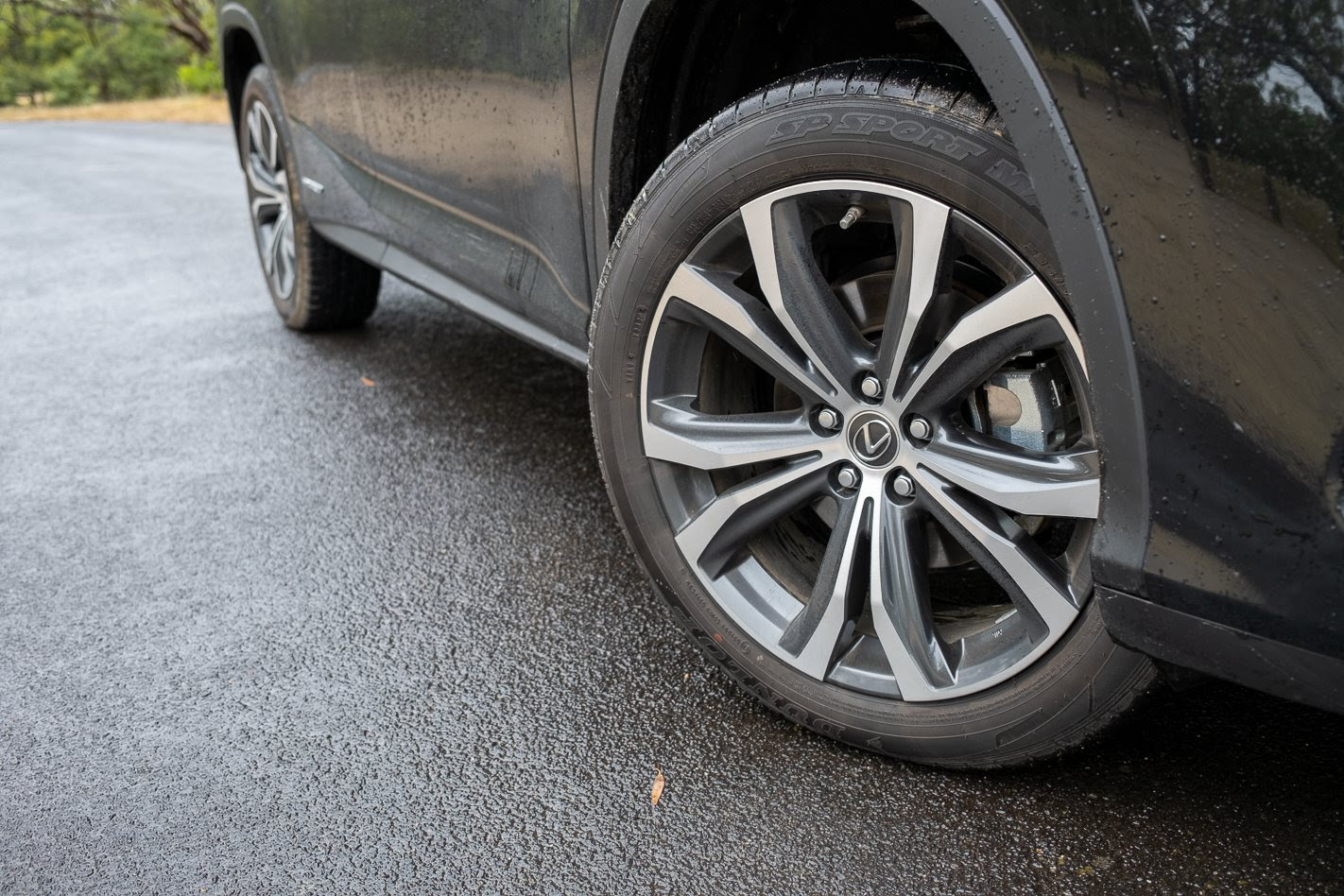 There is the option to drive on full electric power, though only when the car’s energy reserves are full and only up to 40km/h or so before it reverts to petrol power.

Much like its plush carpet and soft seats, the RX450hL’s ride profile is extremely comfortable in all situations.

Around town, it negotiates speed bumps and potholes with ease, and further afield it smooths over pockmarked roads and large bumps without fuss. 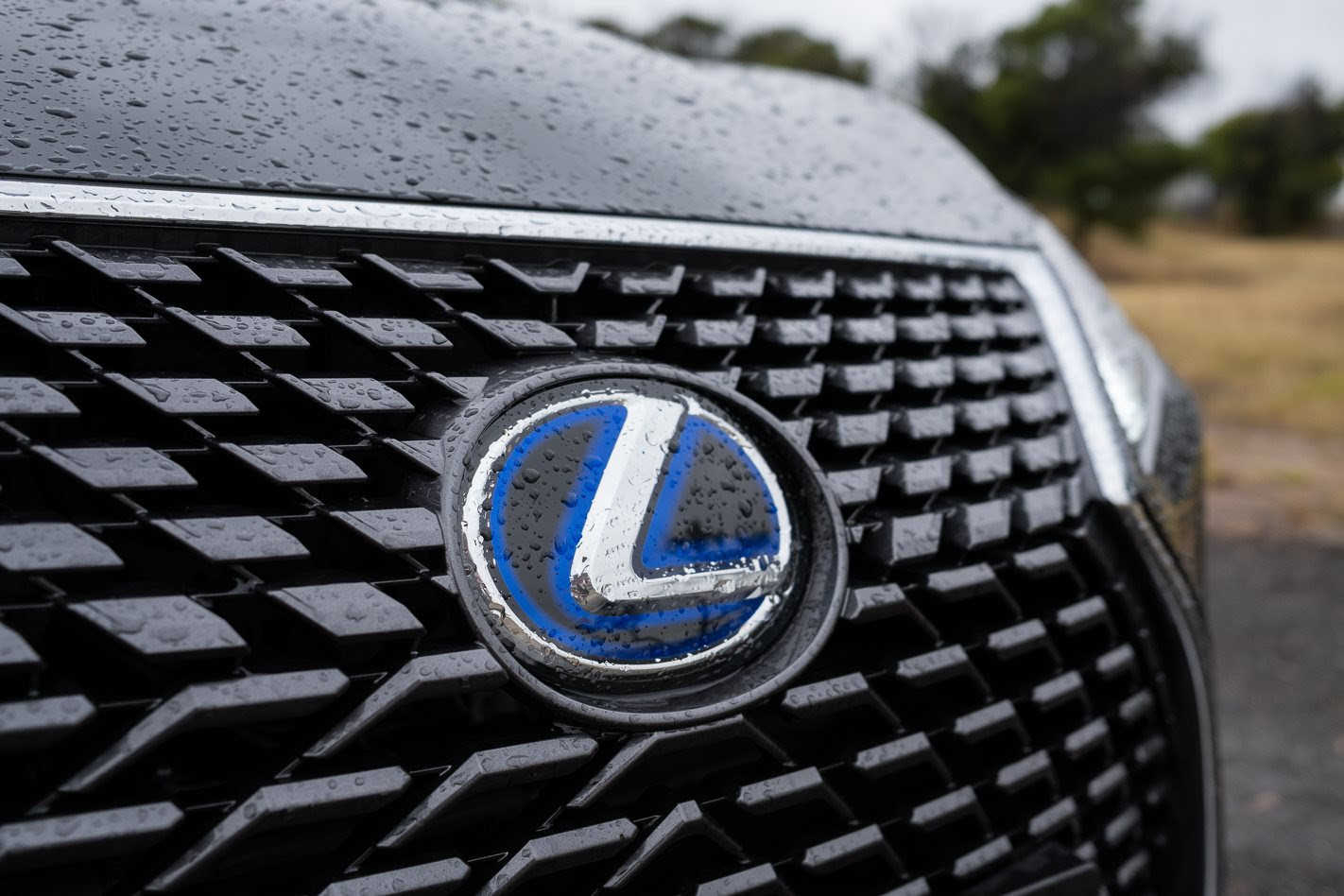 That soft suspension tune does cause it to roll around a bit as you round corners, but not worryingly-so – it is a large seven-seat SUV after all.

Its feather-light steering makes city driving and parking a simple manoeuvre, and manages to retain enough feel to let you know what’s under the tyres when driving rural.

Comfort and convenience is key in the RX450hL, two attributes it delivers in spades.

How safe is the Lexus RX450hL? It misses out on a four-camera panoramic view camera and adaptive high beam system which are reserved for the more expensive Sports Luxury spec.

The Lexus RX was last safety tested by ANCAP in 2015 when it scored five stars, though no updated rating has been given for this car; the facelifted seven-seat version.

How much does it cost to run the Lexus RX450hL?

Capped-price servicing is on offer. It needs to be serviced every 12 months or 15,000km, with each trip costing $595.

Though it does use less fuel than its sub-spec RX350 sibling, we analysed the cost/benefit outcome last year and discovered it would take a long time before the added cost in purchase price would be amortised through fewer visits to the petrol pump.

Read through our long-term loan report for the full run-down. 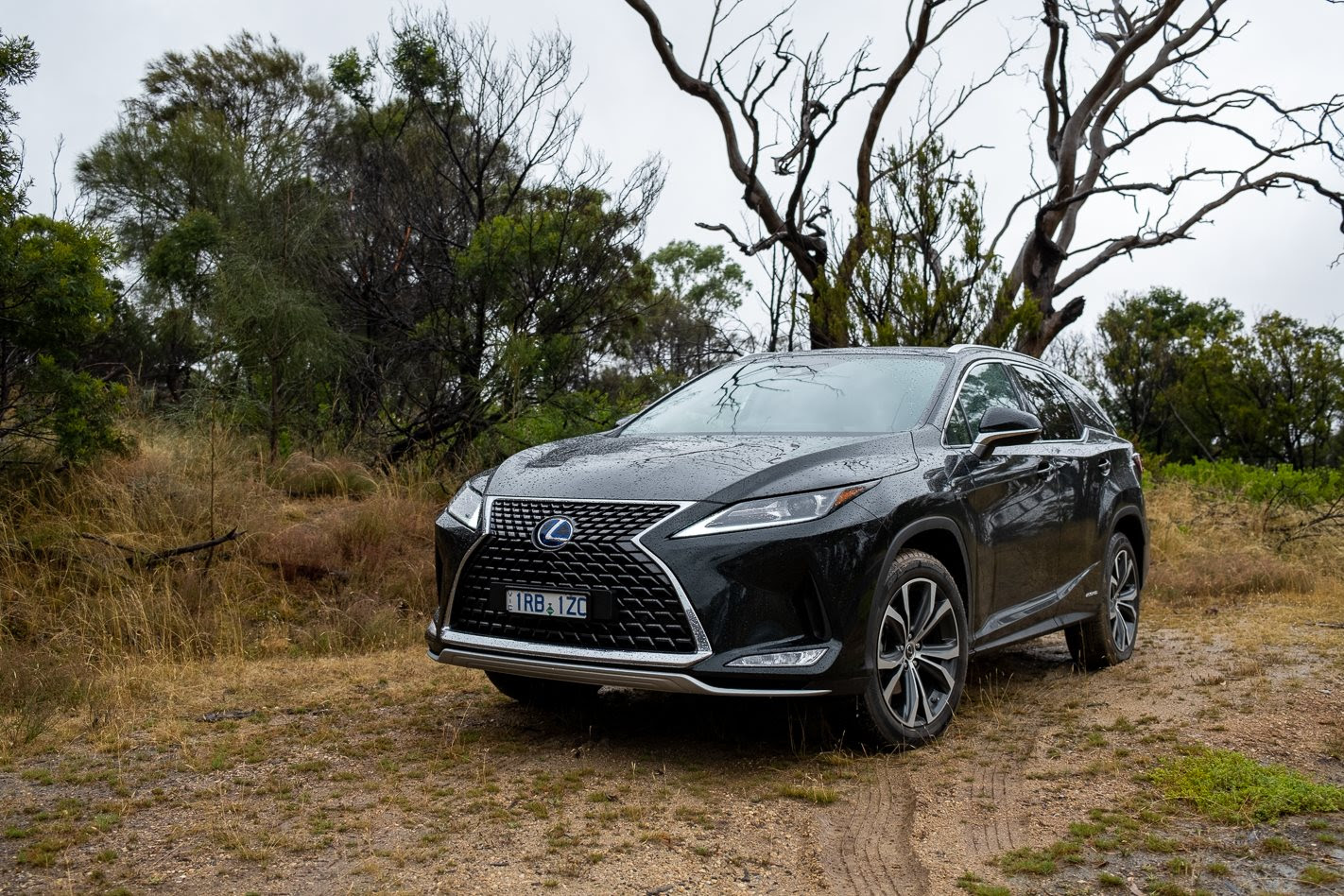 A decent benefit of Lexus ownership is the Encore program which offers a number of benefits like service loan cars, hotel offers, exclusive events and fuel discounts.

As a comfortable cruising SUV, the RX450hL delivers in its brief and then some.

It might not have the bells and whistles of its rivals, but what it does offer is a great set of baseline features and space that will make an ownership experience pleasant. 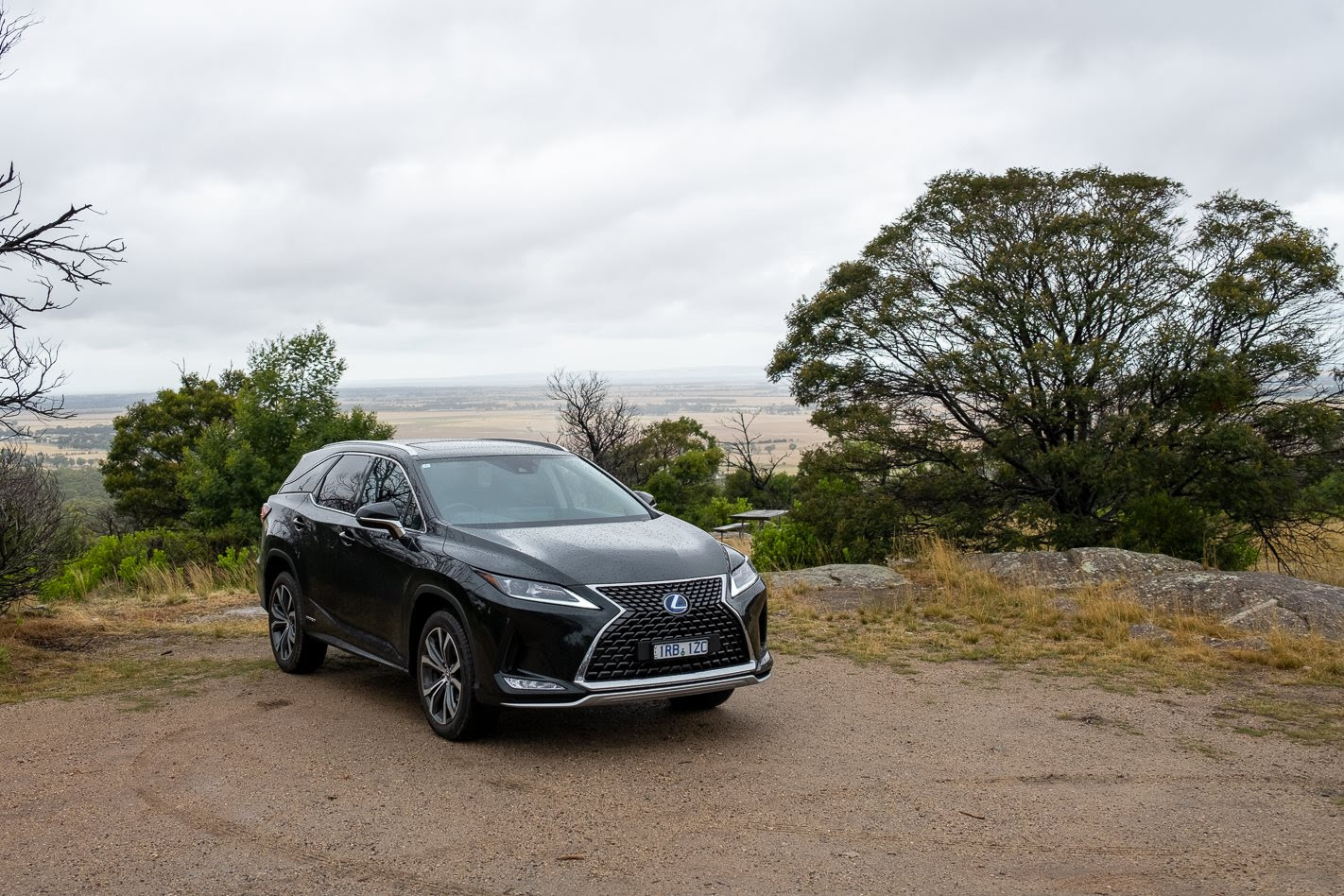 As consumers turn towards hybrid and electric powertrains in the future, the Lexus RX450hL offers a fuel-saving option that’s not really matched by anything within its competitive subset.

After its most recent 2019/20 update that genuinely brought tech, safety and dynamic enhancement, it’s little wonder how the RX was able to jump from sixth best-seller to third in the space of a year.