The Wheels Verdict: We’re not afraid of an unpopular verdict at Wheels and the Audi TT S is one of those sports coupes that ‘real drivers’ find unfashionable. Drive the latest car back to back with its key rivals and you’ll discover that most of the time it’s quicker, just as capable, nearly as much fun and a whole lot better inside. If you’re not afraid of thinking a little outside your lane, there’s a lot to like here. Put simply, the Audi TT S quattro coupe could well be the most convincing sports car Audi makes with an engine at the front. Pitching into the market at a squeak below $100K, the TT S coupe significantly undercuts the Porsche 718 Cayman but is quicker and better finished. So why doesn’t it sell like hot cakes? Read on. 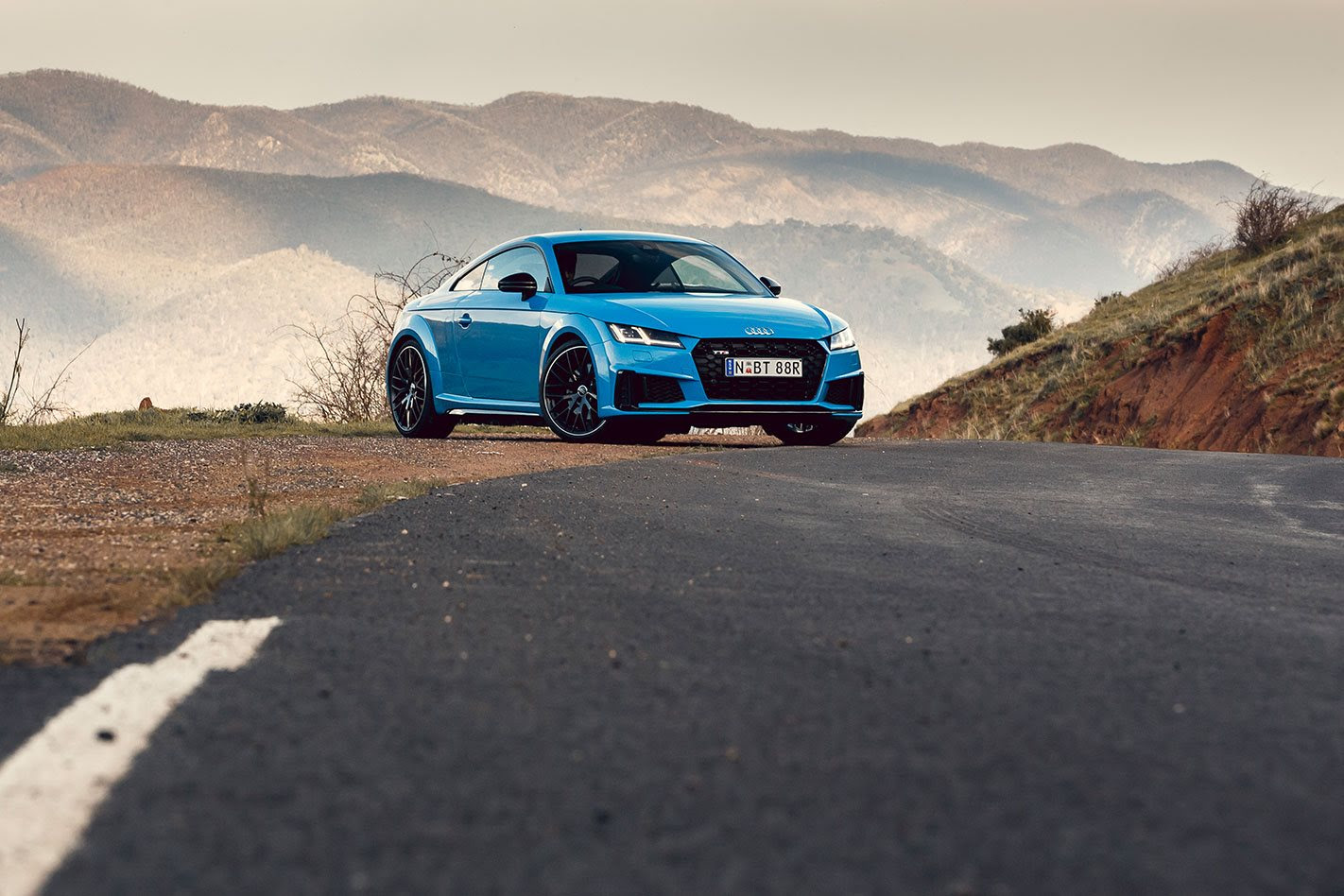 Audi has refreshed the TT S for the 2020 model year, and we managed to grab the very first one in the country. We drove it on some of Victoria’s finest mountain roads and flogged it down a drag strip to bring you the definitive news on the hottest four-pot TT.

It’s easy to get a little conflicted about the Audi TT S quattro coupe. Part of you figures that it shares its underpinnings with a VW Golf R, a well-regarded driver’s car, so why does the TT get saddled with the image of a coupe for people who just don’t get it? Then, convinced that Audi has been done a disservice, you begin to wonder why the ‘coupe version of a Golf R’ should cost almost double the price. This was never going to be straightforward.

The TT S is a nameplate that first appeared on the second-generation TT back in 2008. It became familiar over time as playing second fiddle to the slightly deranged TT RS sports flagship, always powered by a 2.0-litre four-cylinder engine with all-wheel drive. The third and final-generation TT debuted in 2014, with the TT S powered by a 210kW turbo four. 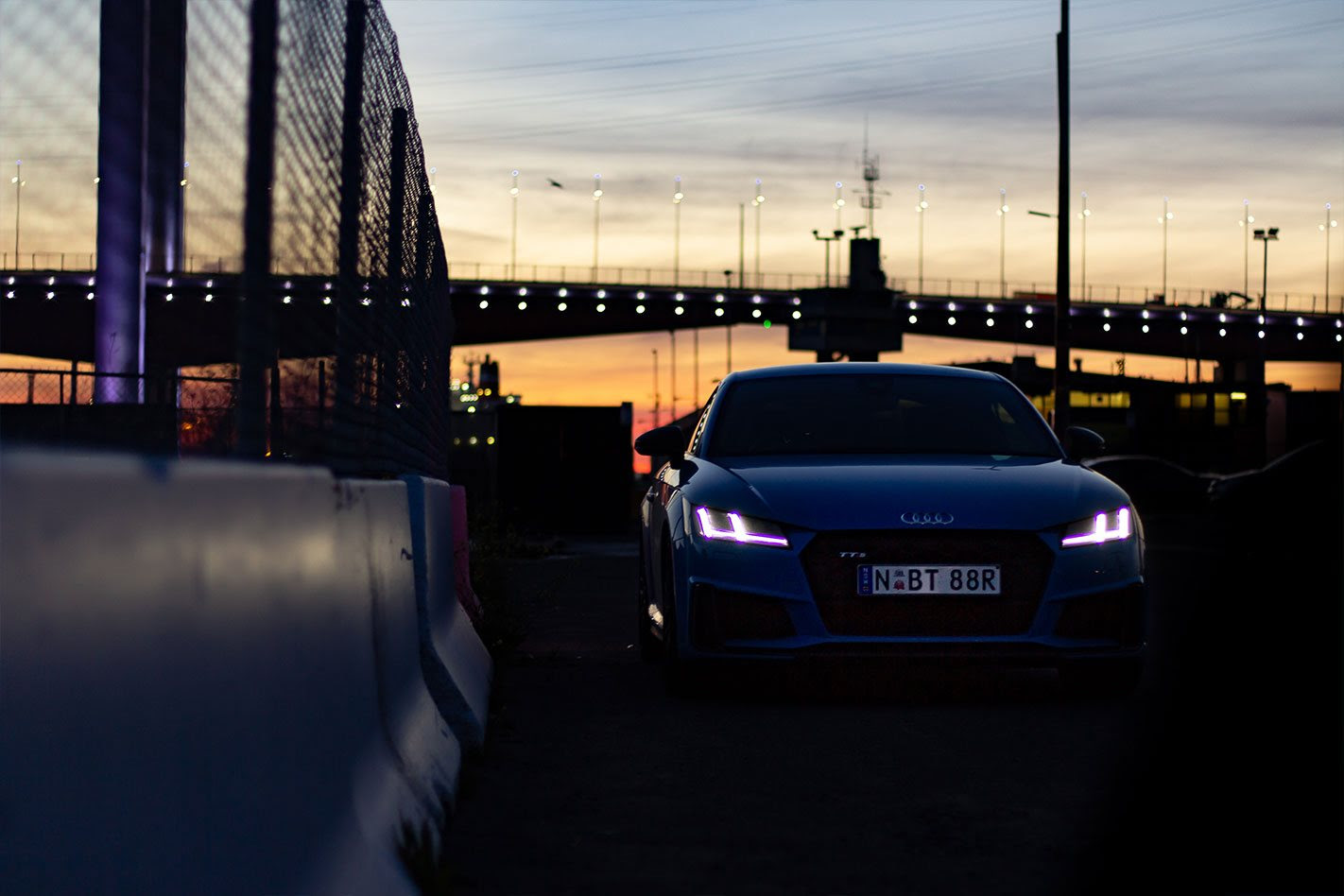 That hasn’t changed with this updated model. So what has? The front end looks a bit sharper, with a three-dimensional single-frame grille, and Audi has ladled on a stack of extra equipment to sweeten the deal. It claims that $8500 worth of gear that previously resided on the options list are now standard fare, including metallic paint, red brake calipers, heated front seats, Nappa upholstery and a punchy 680W 12-speaker Bang & Olufsen stereo.

First impressions of our test car are of beautiful paint and questionable wheels. Both are options. The Turbo Blue paint finish will set you back another $550 and the 20-inch Audi Sport 10Y alloys are part of the $4900 S Performance package, which also includes matrix LED headlights, black high-gloss exterior bits, carbon twill seat inlays and interior elements in satin-finished body colour. Opinion was divided among the test team on whether the latter inlays looked great or dreadful. The rest of the cabin is beautifully finished, with some of the prettiest HVAC controls around and, unusually for a modern car, no centre screen. All of the digital displays are incorporated into the fully virtual 12.3-inch dash, and while it rewards some familiarity in order to seamlessly flick from music controls to nav and then car functions, a programmable hot key on the steering wheel helps speed things up.

Thumb the starter button and the engine fires up into an inoffensive thrum. Click the Drive Select switch over into Dynamic mode and it transforms into an eerily convincing facsimile of the five-cylinder 2.5-litre lump found in the TT RS. It’s uncanny. It’s also seriously quick out of the blocks. At Heathcote Park, we timed the TT S from 0-100km/h and the 4.5 second figure was 0.2sec better than Audi’s claim. In other words, if you’ve just splashed out for a 250kW Toyota Supra GTS and find a TT S next to you at the lights, we’d advise you not to bother getting all Dominic Toretto. The TT has often raised more questions than answers when pointed at a seriously challenging stretch of bitumen though. We found the perfect hill route to put the TT S through its paces and came away broadly impressed. The ride quality has come in for some criticism but there’s an individual mode in the Drive Select system which allows you to set the adaptive dampers into their more comfortable setting and wick up the rest of the car’s responses.

It corners flat and hard, the big 255/30 ZR20 Pirelli P Zeros finding plenty of purchase in the dry. The steering at first feels disappointingly light, but get used to the weighting and it’s a very high-quality electrically assisted set-up. Too many such systems attempt to artificially inject weight and fake feedback. The Audi’s steering feels clean, despite the front wheels always being driven, and allows you to concentrate on the important job of positioning the front end. When you do overcook it and push the front into understeer, there’s enough early warning coming through the wheel rim to prompt you to trim the line a little.

The front end of the TT S turns in sharply, the four-cylinder engine making the nose latch onto a line far more adroitly than the weighty five-pot in the TT RS. In the wet, it’s an absolute weapon. Brake late, ride the split second of scrub and then just give the throttle the treatment as you sight the corner apex. We ran the TT S against a Supra and a BMW M2 Competition for a forthcoming Wheels feature and, without issuing too much in the way of spoilers, it utterly demolished the pair of them when the heavens opened. Unlike certain rear-biased coupes, the TT S isn’t about managing traction on the way out of a corner. Instead, you need to monitor the available grip on the way in. Get it right and you can pivot the rear end neatly on the brakes, pointing the nose exactly where you want to go. One complaint was that the 338mm front brake discs lacked the cooling required to stand up to some serious abuse. After one run down the hill into our test venue, the smoking brakes were registering over 300 degrees on an infra-red thermometer.

The six-speed DSG transmission of the test car shifted as crisply as you’d expect, although the drive logic, even in Dynamic mode, was a little off. You’ll want to take control of the paddles yourself on a truly challenging route. And that ride quality? You tend to notice it when you’re not actively driving the car, but attack a challenging road and it settles into a flow. Leave the dampers in their comfort mode and the TT S will brake cleanly into a corner without the front end bucking noticeably.

So are we convinced by the TT S as a genuine sports coupe. Almost. There are still a couple of issues, such as the transmission calibration and the underspecified brakes that still betray a hint of Audi not quite understanding what demanding drivers want from a sports coupe. It’s hard to argue with the TT S’s speed and poise on a challenging road. Anyone who feels that this car lacks involvement probably thinks that ‘involvement’ and ‘doing powerslides’ are Venn circles that totally overlap. Real world? Thanks to all-wheel drive, it’s quicker than its similarly priced rivals.

The longer we spent with the TT S the more we appreciated its other charms too. The interior is beautiful, and easy to live with on a daily basis. It has (small) rear seats for bags and jackets. There’s decent headroom inside and even a useful 316-litre boot. If you buy a sports coupe for what it can do for you rather than what it can do for a road tester on a closed circuit, the TT S merits serious consideration. 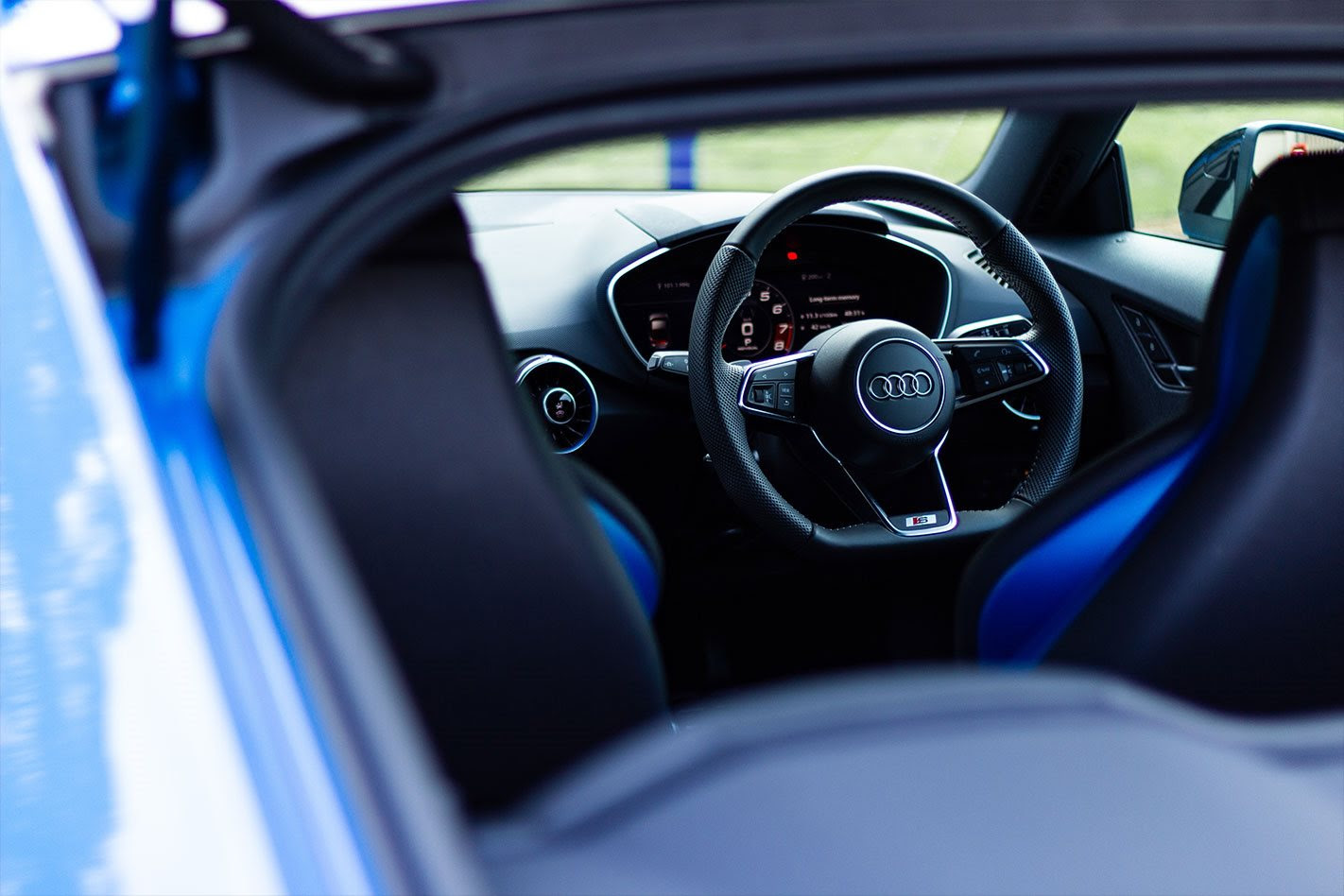