Is the Hyundai eight-seater good enough to knock off Toyota’s segment hero?

Hyundai has drummed up enough reason to wedge in another SUV to its Australian range, with the Palisade eight-seat SUV also representing the brand’s flagship product.

Seldom do we see eight-seater SUVs gracing the Australian new car market, marking a distinction between the Palisade and the current seven-seat load-lugger of Hyundai’s line-up, the Santa Fe.

It may appear that there’s little difference between the two at first glance – save for the option of an extra seat – though Hyundai says the Palisade is noticeably larger than the Santa Fe and it will come better appointed.

Standing in its way of SUV range dominance, though, is Toyota, which is a brand that commands a comfortable lead over its rivals in the large SUV segment.

The model that the incoming Palisade really has to worry about is the Kluger.

One immediate way that the Palisade stands out among its competitors is that it offers both seven and eight seats; an uncommon occurrence in the large SUV market.

It’s based on the same platform as the Santa Fe, but presents 210mm longer and 85mm wider. That extra size translates to extra space inside for passengers, and extra storage space with 704 litres of volume in the boot with the third row stowed.

We’ll know more once we get hands-on with the new Palisade later this year, but space in the third row is said to be generous and not solely an afterthought to banish naughty kids to.

Eight-seat versions have a three-up second row (seven-seaters use two captain’s chairs in the second row), while the third row always has a three-wide bench in place. 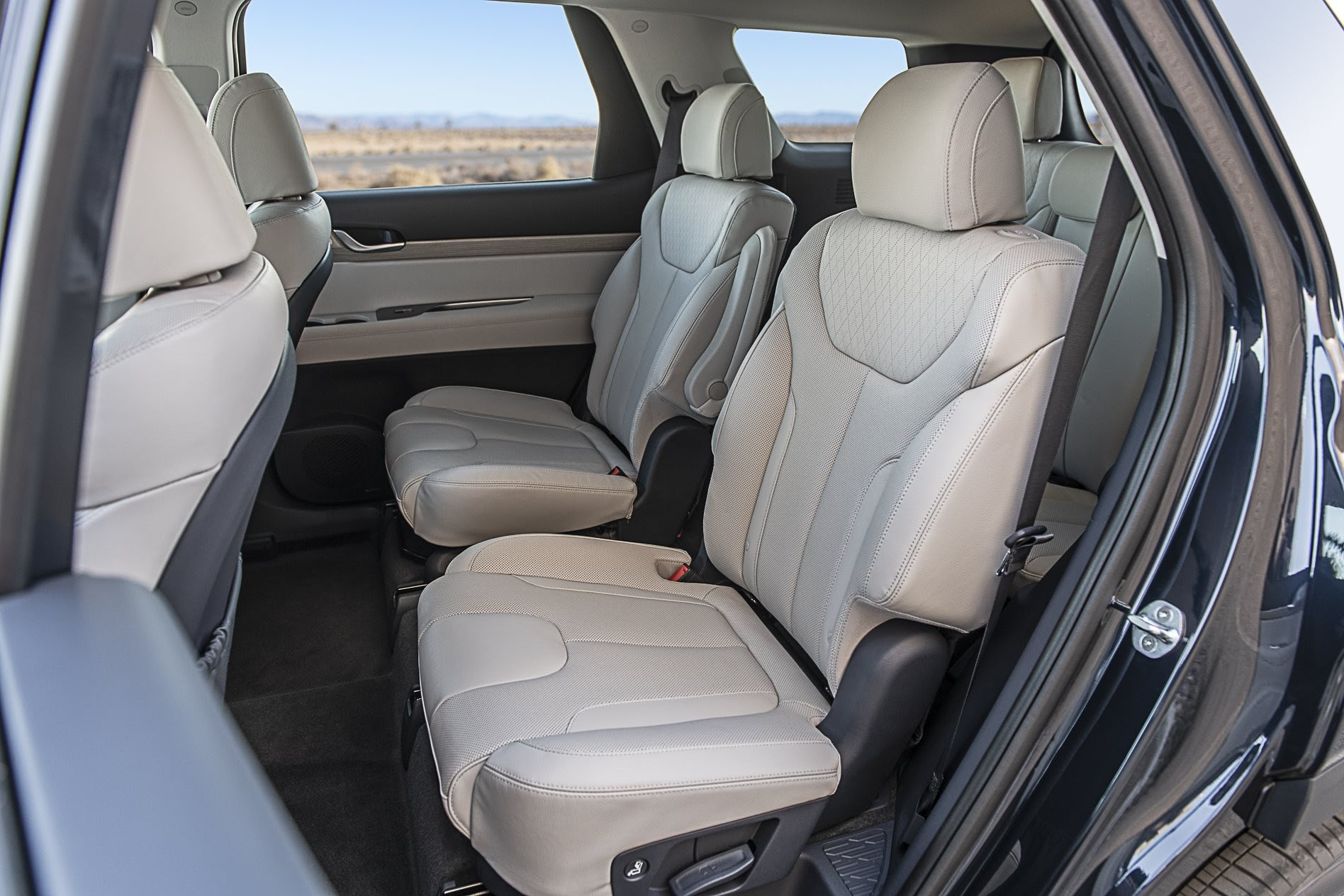 It’s a big car – expect nothing less for something designed for the American market.

The Toyota Kluger is also designed for the American market, but still finds considerable success in Australia, regularly notching up more than 1000 sales a month.

While a new Kluger has been released overseas, we’ll have to make do with the current generation – near-on seven years old – until 2021. 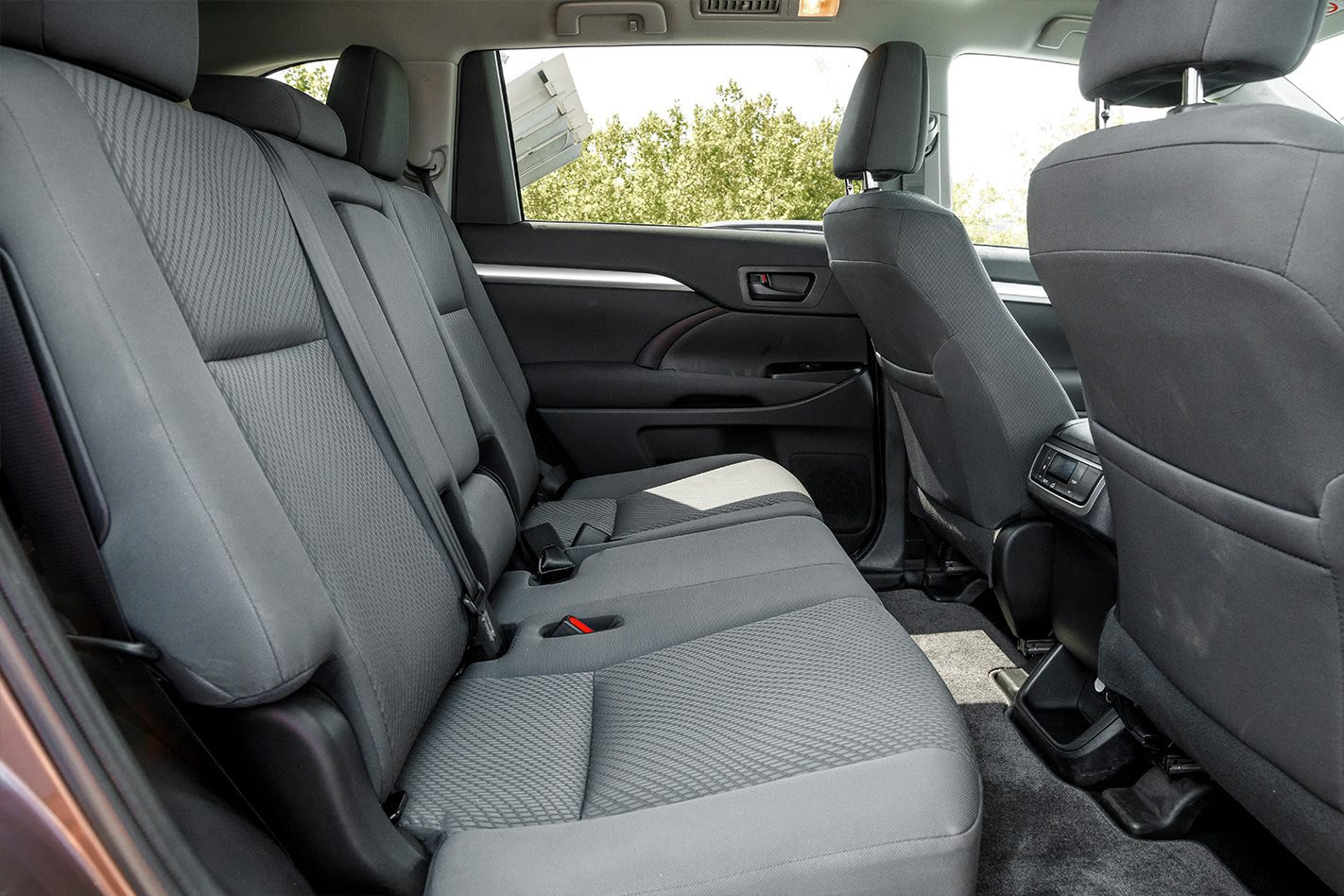 That said, it’s a value-driven proposition that fits seven people and has a deep enough boot with 529 litres of space with the third row flat.

Space in the Kluger is great for both first and second rows, but filling it full of adults can be squeezy. 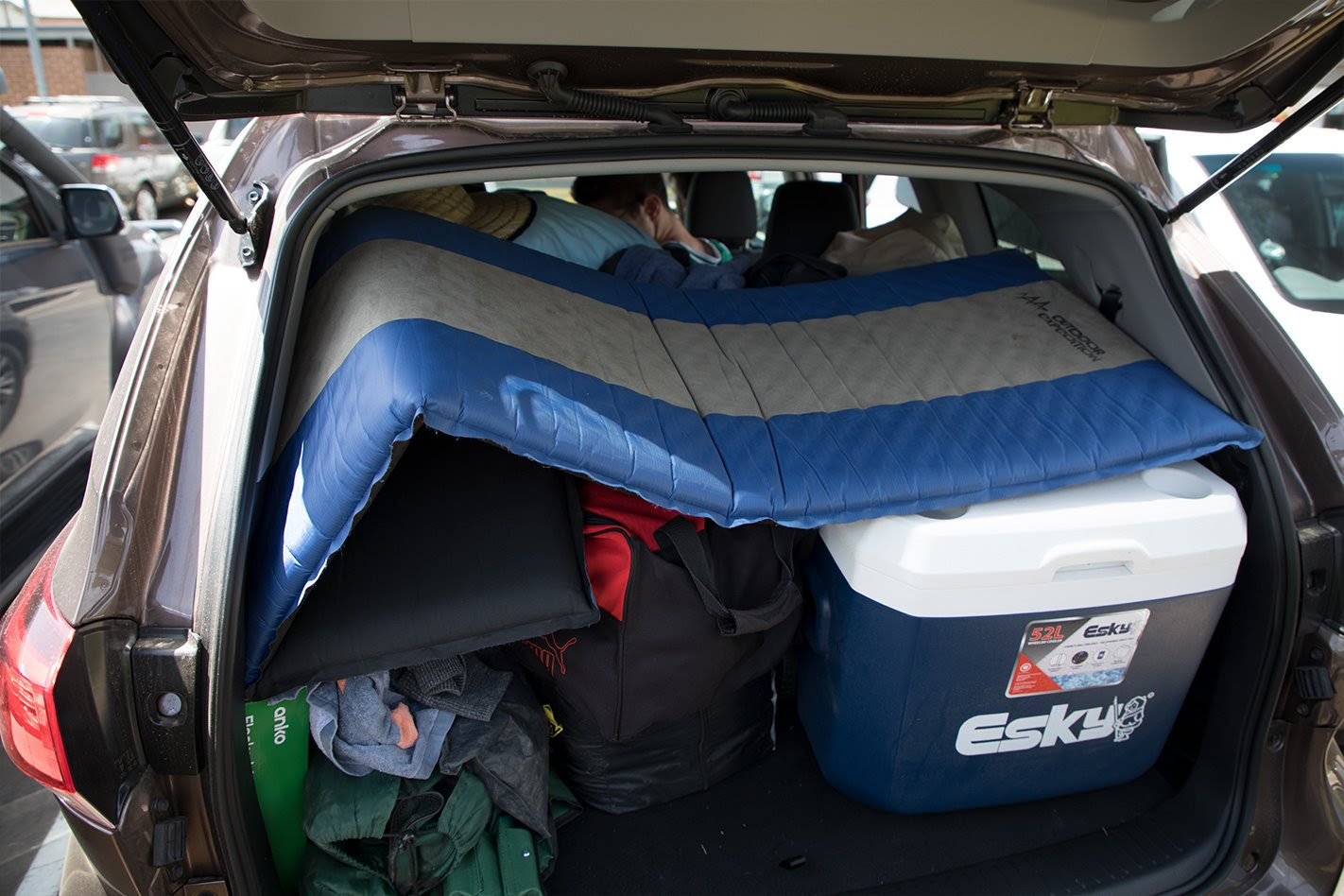 The Kluger is an accomplished cruiser and has an abundance of space for a family, though we reckon the Palisade might just pip it and cater more comfortably in terms of space – especially with that bigger boot.

Hyundai is going big on catering for the whole family with the Palisade. It’ll get a whopping 16 cupholders, seven USB charge points, a push-to-talk intercom system to address wayward third-row occupiers and air conditioning for all three rows when it goes on sale. 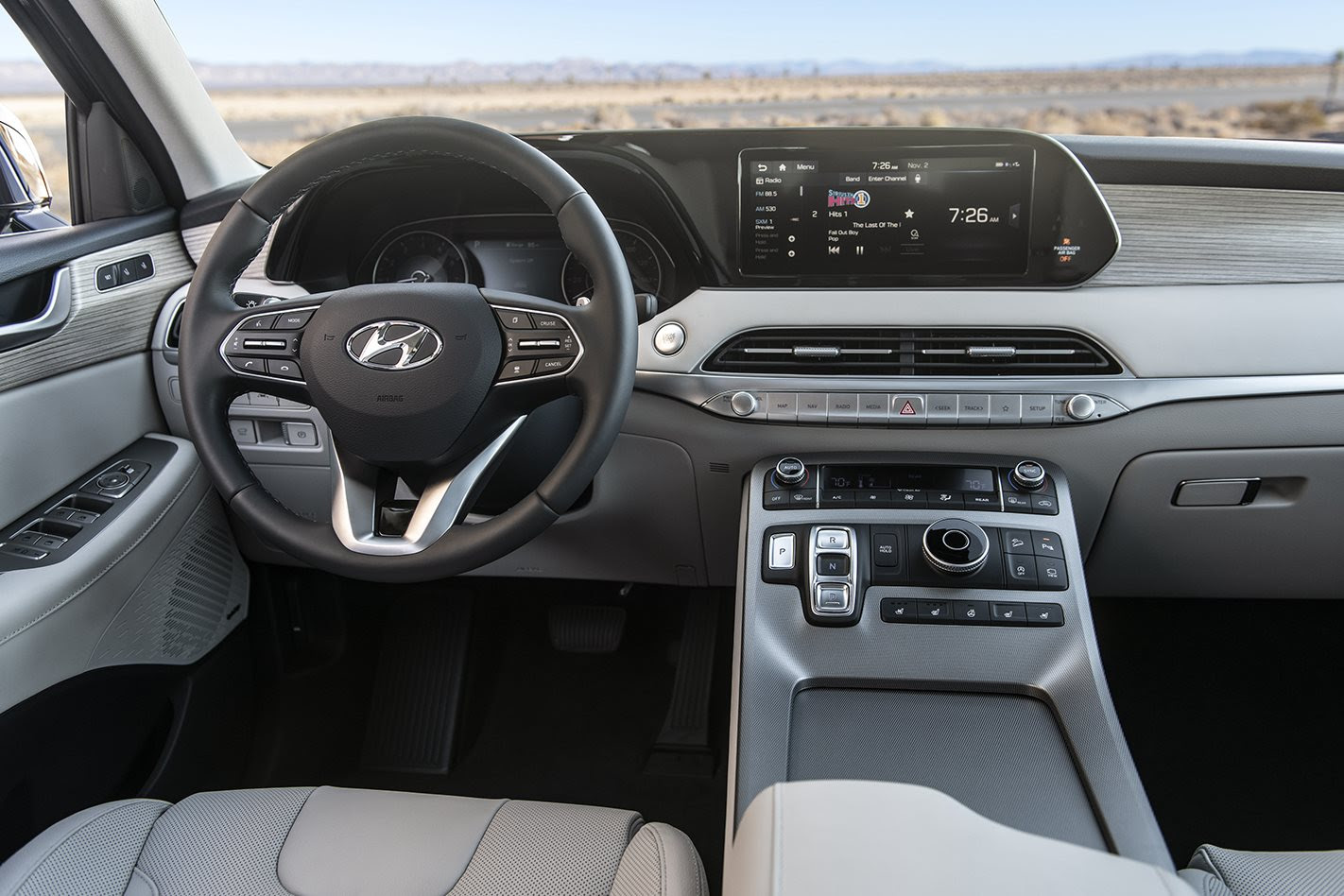 Additionally, it gets a 10.25-inch touchscreen infotainment system (with Apple CarPlay and Android Auto) and a 12.0-inch digital instrument cluster that can display side mirror images, prompted by the flick of an indicator to change lanes. 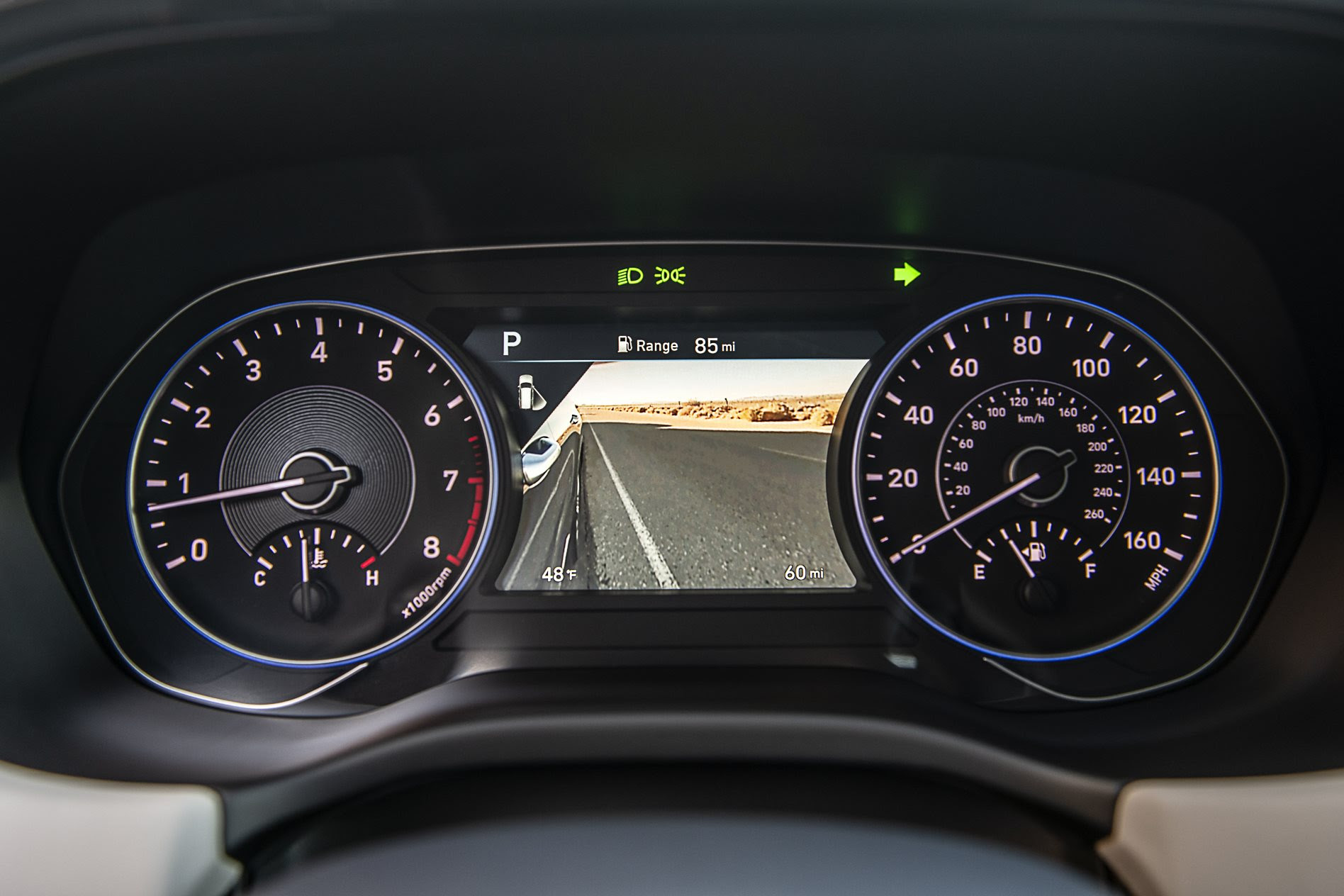 Comparatively, the Toyota Kluger looks a bit old-hat. Despite some mid-life updates it still makes do with an 8.0-inch infotainment screen for the top models, misses out on smartphone mirroring tech for Android Auto and Apple CarPlay and some of the materials feel a generation behind.

That said, it does have a respectable amount of safety equipment including rear cross-traffic alert, lane-keep assist, autonomous emergency braking and active cruise control on all model variants. 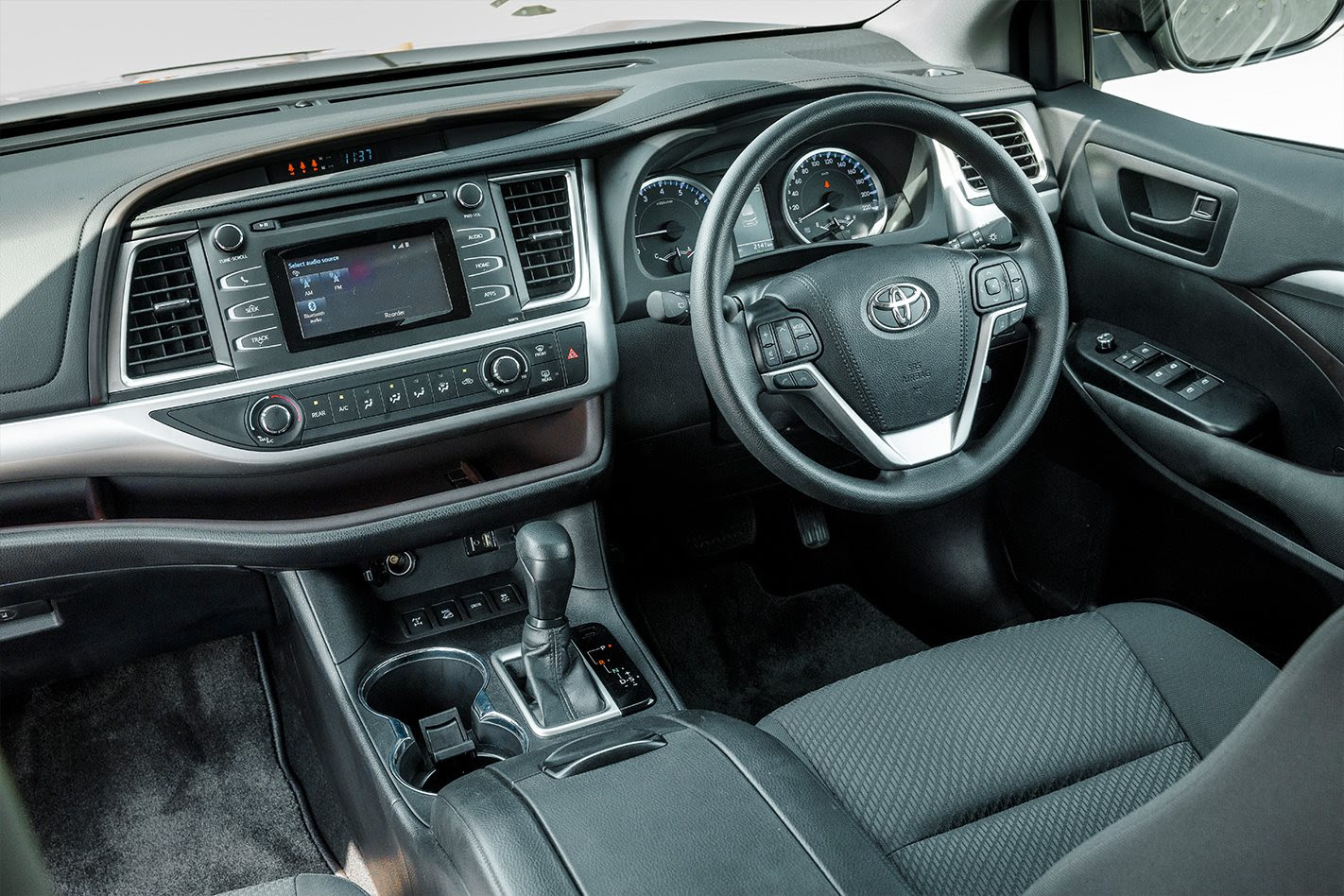 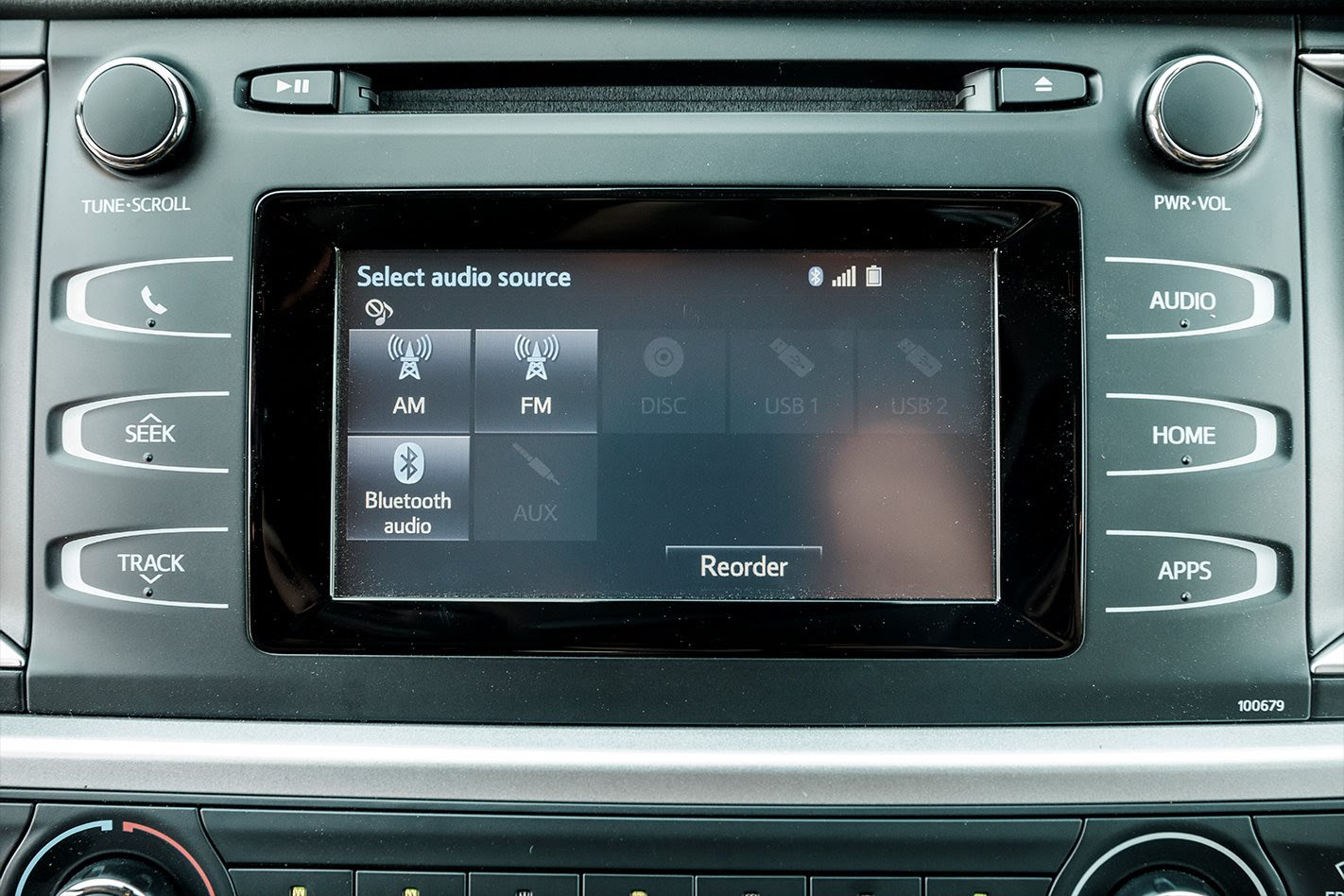 Palisade will come to Australia with a new naturally-aspirated 3.8-litre V6 engine with 213kW and 355Nm sent to the front wheels. That powerplant will be joined by a second diesel version which utilises a 2.2-litre turbo-diesel four-cylinder for 147kW/440Nm – that will power all wheels.

Both powertrains will use a traditional eight-speed automatic transmission; there will be no manual transmission offered in the Palisade range. 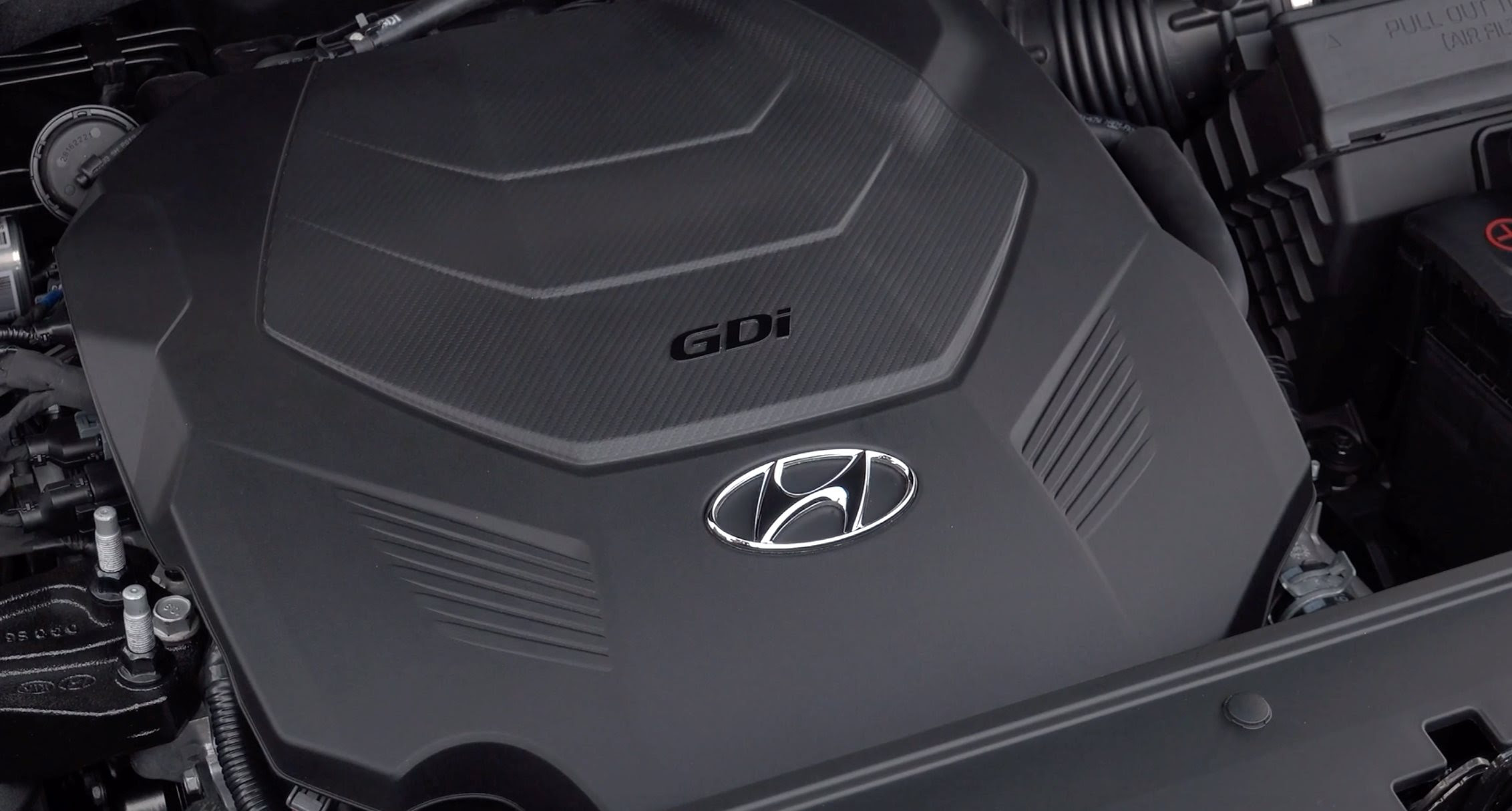 Usually, Hyundai Australia lends its local-tuning expertise to new models to tweak its cars for our unique roads, but Hyundai says the Palisade is already handling and riding at an acceptable level.

The Toyota Kluger uses just one engine across its range: a 3.5-litre naturally aspirated V6 that’s good for 218kW and 350Nm. An eight-speed transmission sends power to either the front or all wheels, depending on which model grade you opt for. 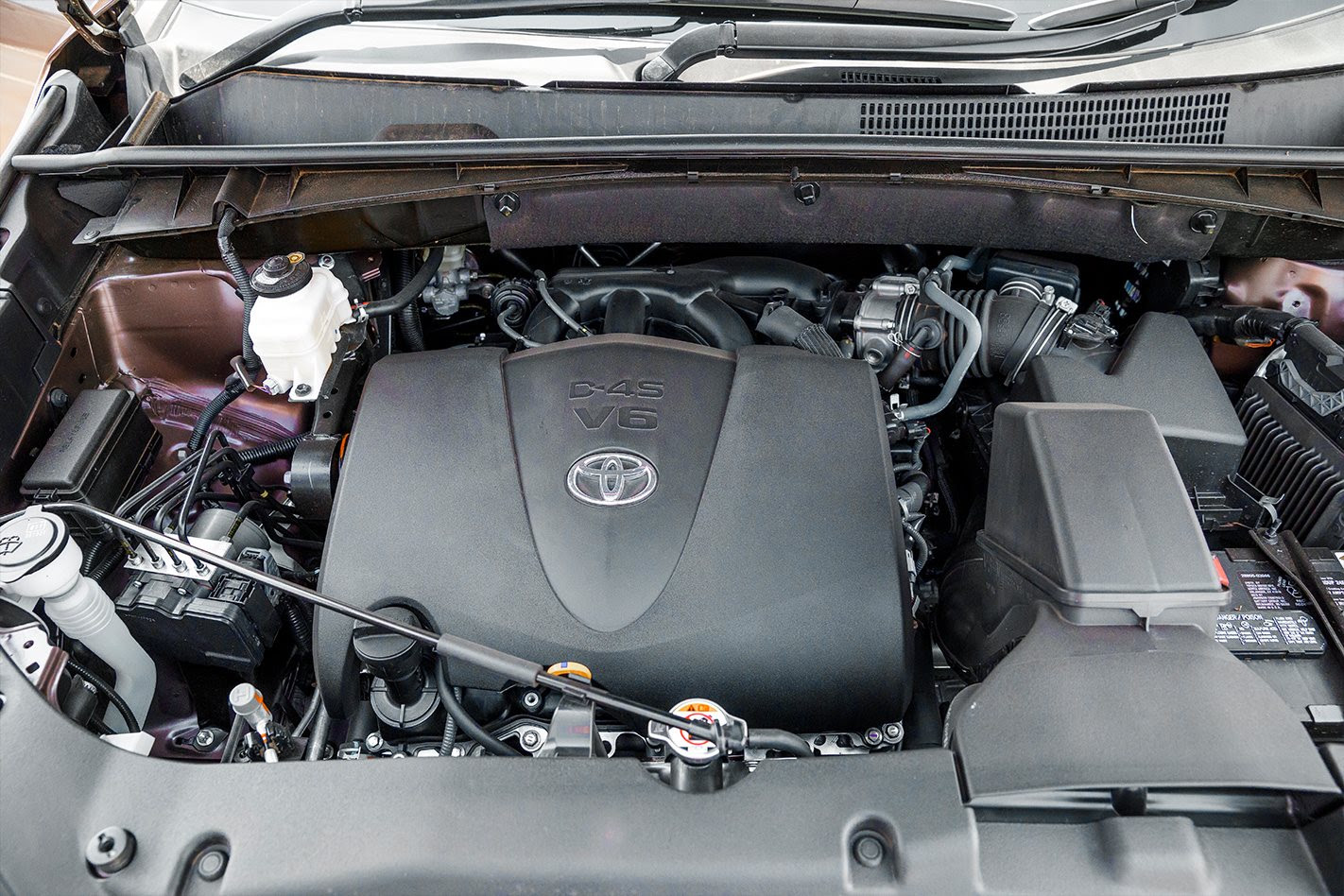 The Kluger’s 2FG-FKS powerplant is tried and tested, and will carry over to the new car in 2021. The Palisade’s six-potter is the newest that Hyundai has in the cupboard, so the two will be pretty evenly matched.

The Hyundai Palisade is due to arrive on local soil closer to the end of 2020 and as yet, Hyundai hasn’t put out pricing or specification for the new model. 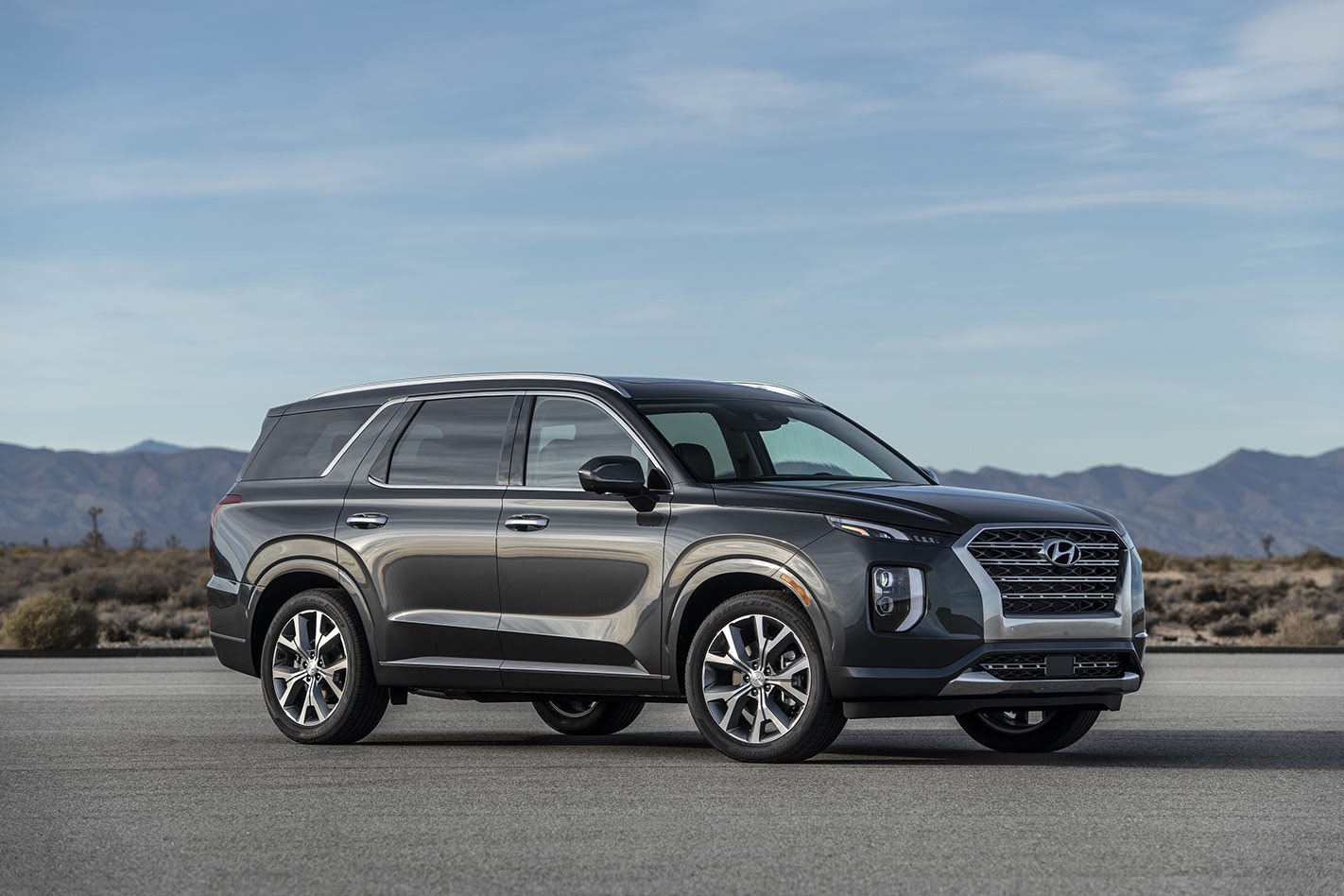 Toyota is selling the Kluger from $44,850 for its entry-grade, right up to $68,574 for the top spec variant – though watch out for runout deals later in 2020 as Toyota ramps up to take the new fourth-generation car. 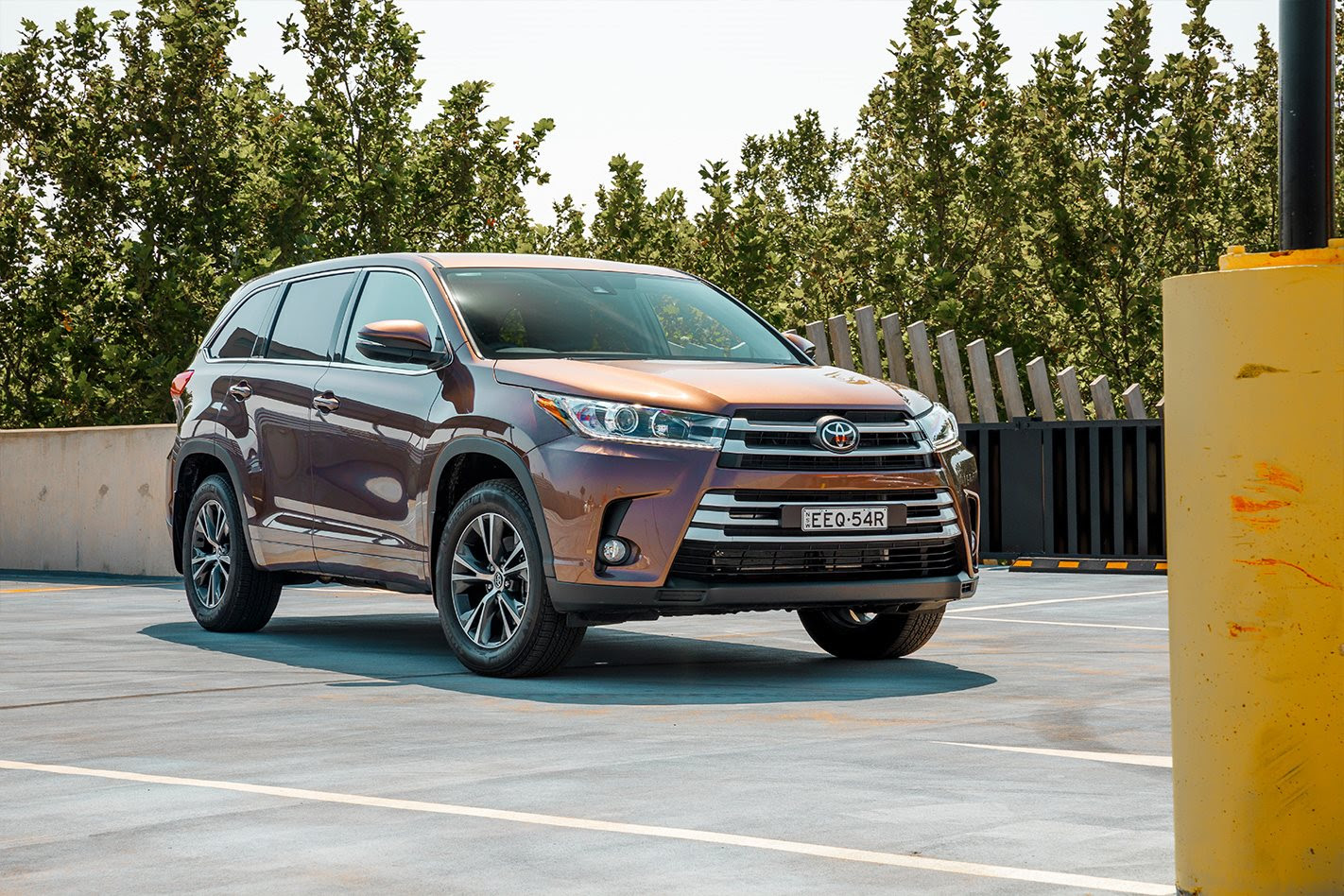 Toyota trades hard on its reputation, reliability and dealer network, but looking at product alone it’s going to be interesting to see how it fares against the all-singing, all-dancing Palisade large SUV. 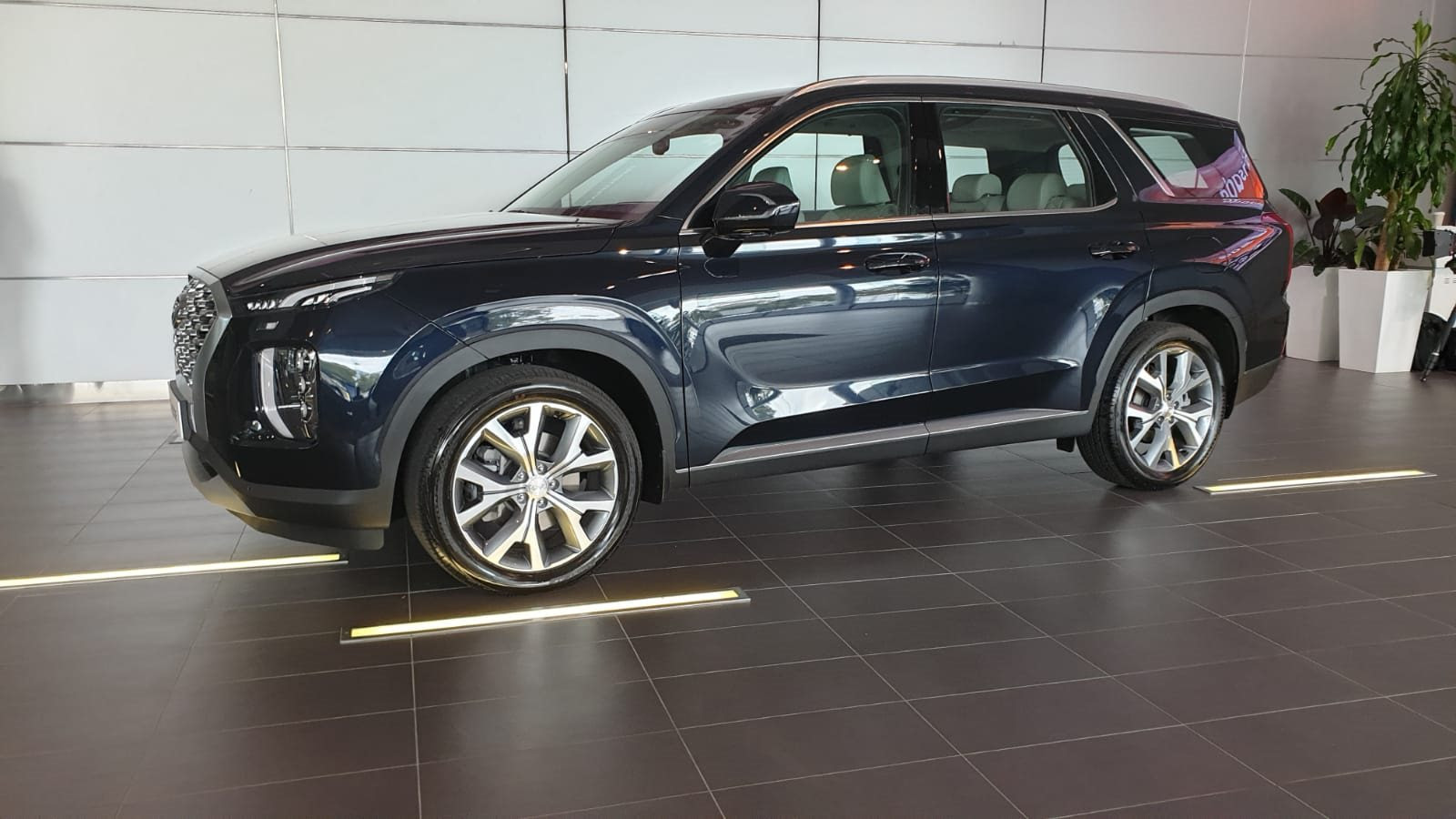 As long as Hyundai doesn’t price itself out of contention, we could be looking at a new king of the segment.