At the risk of reading from the Captain Obvious handbook, it’s clear that plenty of 4×4 ute buyers do not work from same priority list as car buyers. If strong fundamentals of the driving experience, and inclusion of the latest multimedia and safety tech were 4×4 prerequisites, then the outgoing Isuzu D-Max would have never achieved the level of sales success it has.

No, it’s clear that to regularly nudge the overall top 10 best sellers in the country, the D-Max had to be appealing to buyers with a different set of must-haves: a reputation for rugged unburstablity, a six-year warranty, affordable servicing schedule, and keen drive-away pricing. So does where does the new third-generation set it sights? We drove the mid-spec LS-U, noting that it leaps ahead of segment rivals in terms of safety and assistance tech, improves enough on the driving fundamentals to claw its way into a more competitive position against them and retains most of the virtues that were clearly always on its side. The only question will be value, as the price rises are not insignificant.

The safety/assistance list reads like what you’d reasonably expect from a well-equipped hatch or SUV, but is big news for this segment. There are now eight airbags (including a centre bag between the front occupants), while the AEB system is more sophisticated than that of rivals, using twin 3D cameras mounted in the windscreen, enabling the system to more precisely detect vehicles, pedestrians or cyclists, as well as curb you from trying to turn across traffic in front of an oncoming car. Lane-keep assist, blind-spot monitoring, and speed-sign recognition (linked to the radar cruise) all feature. The new 4JJ3-TCX engine is an evolution of the old unit, not a clean sheet design. Developed specifically for the Australia and Thailand markets (the latter where the vehicle is built, and where it outsells Toyota HiLux and Ford Ranger), it still displaces 3.0 litres from the same bore and stroke, but features a new block, head, pistons and fuel injection system to achieve modest bumps in both power and torque. Its peaks of 140kW and 450Nm are gains of 10kW and 20Nm respectively.

There’s noticeably better suppression of NVH than in the outgoing D Max, but that’s faint praise, and the new rig doesn’t doesn’t set any class benchmarks for smoothness, quietness, or response. It’s now approaching par with Hilux and Ranger, but well short of the refined muscularity of the now-ancient VW Amarok in V6 guise. 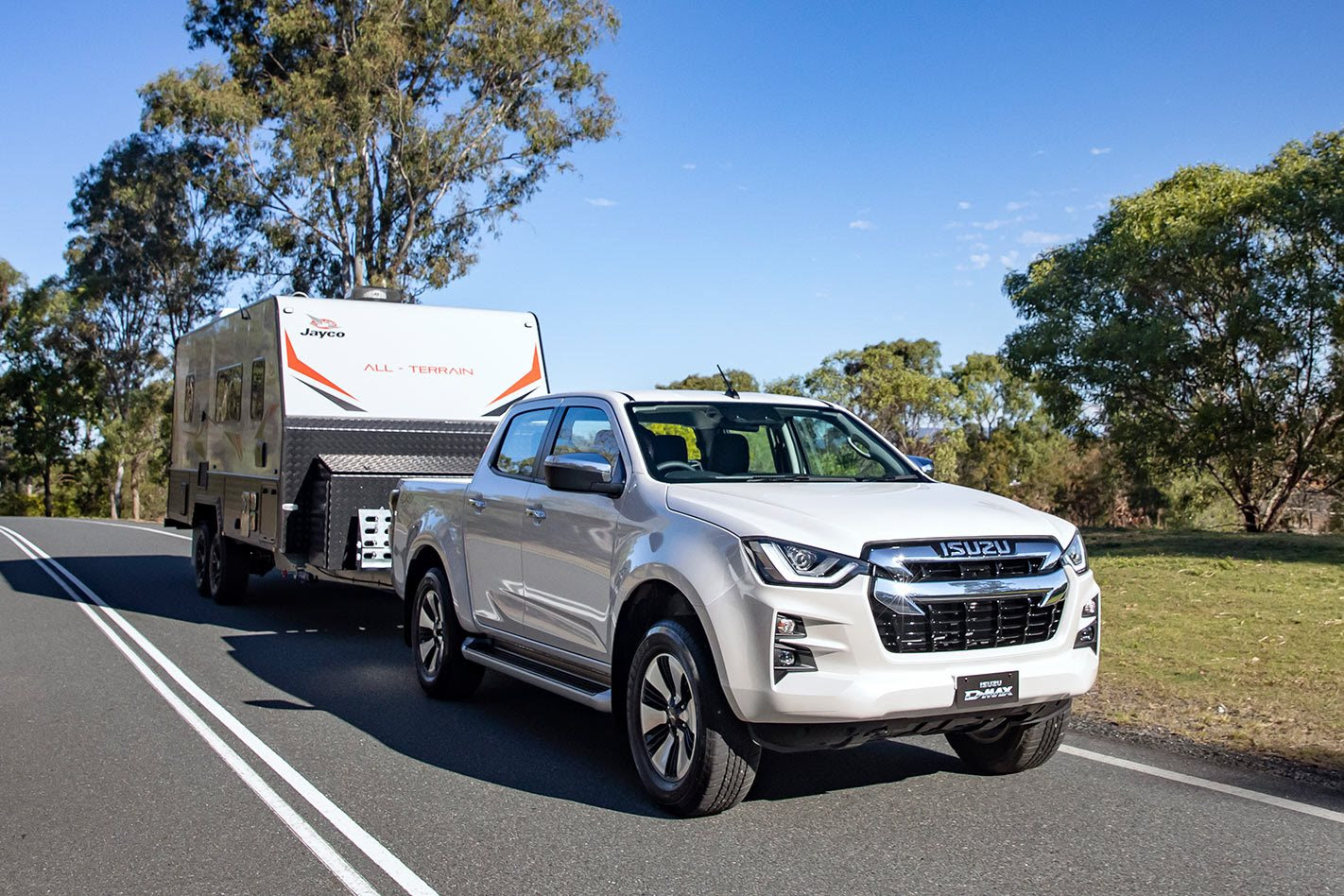 The Asin six-speed auto is also updated, now with an improved cooler (relevant for towing), and 0.2-second faster shift speeds. Despite first gear being a little taller, it still feels short, so there’s more revs and freneticism than ideal when moving away from rest or exiting intersections at low speed. No paddles to give you control, either, so you find yourself accelerating then lifting to initiate an upshift and better surf the substantial torque curve.

The new chassis features an additional (eighth) crossmember, while greater use of high-tensile steel trims weight and brings a claimed 20 percent increase in rigidity. The wheelbase has grown – up 120mm to 3125mm – but overall length is 15mm shorter. Ground clearance is marginally better  (up by 5mm, to 240mm for models on 18-inch wheels) but significantly for this segment, the new chassis allows a higher overall GVM of 3100kg for all 4×4 models. That means in the heaviest model (top-spec X-Terrain at 2130kg), you’ve still got a generous 970kg of payload allowance. 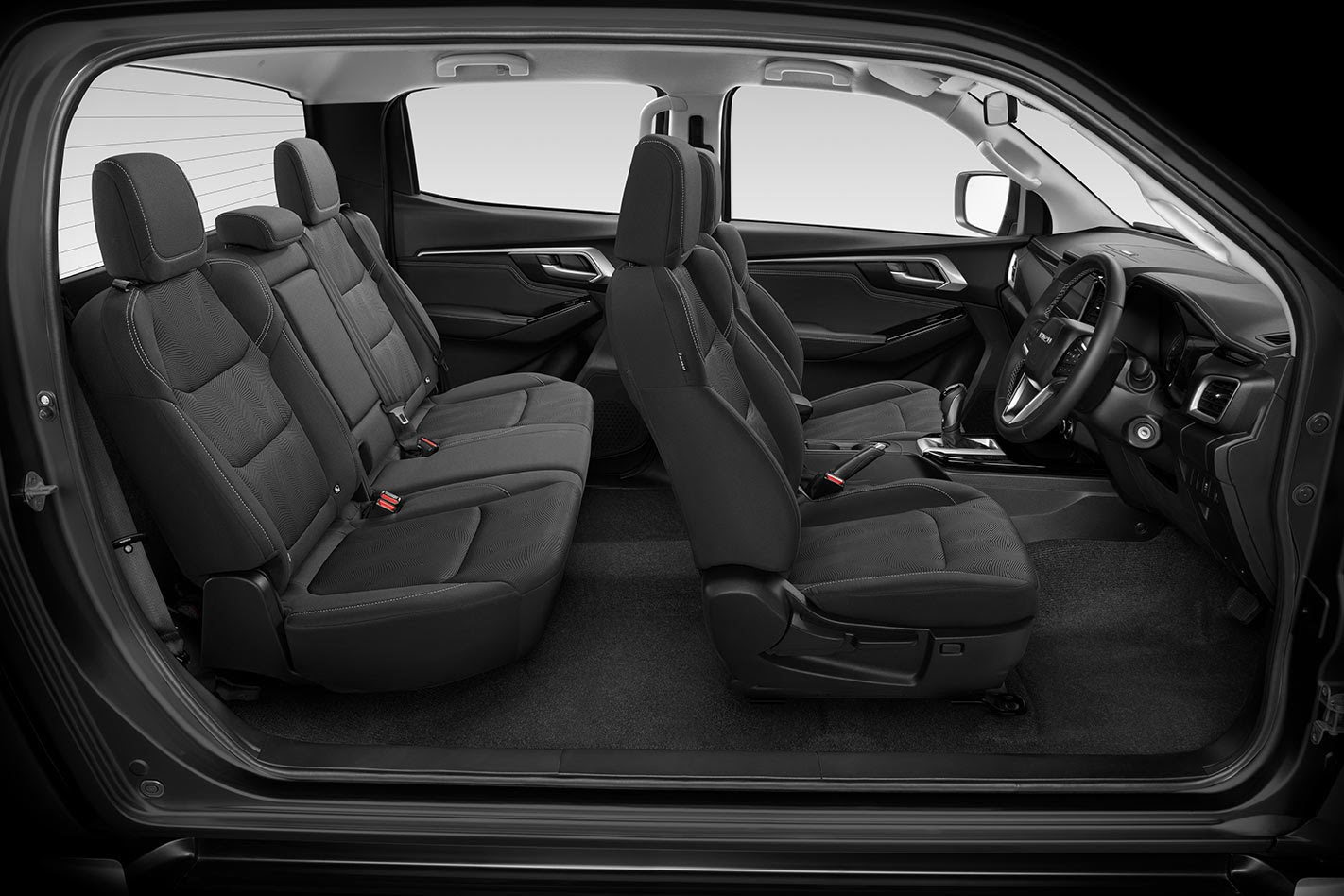 On the road, the new EPAS rack has been tuned for a soft off-centre response, quite distinct to the more alert, eager calibration of, say, the Ranger’s steering. The extra wheelbase helps composure, but the driving experience has not transformed into some kind of magic-carpet ride. There’s still the constant restlessness and incessant head-toss on typical Aussie roads that’s largely endemic to this segment. And despite the move to larger front discs, the rear still runs drums, which is disappointing.

At least owners can expect appreciably better off-road performance. In a much-needed first for D-Max, all 4×4 models are fitted with a locking rear diff (operable in low range only) while Isuzu also claims the off-road traction control system is retuned and improved; a full forthcoming off-road test will reveal  by how much. 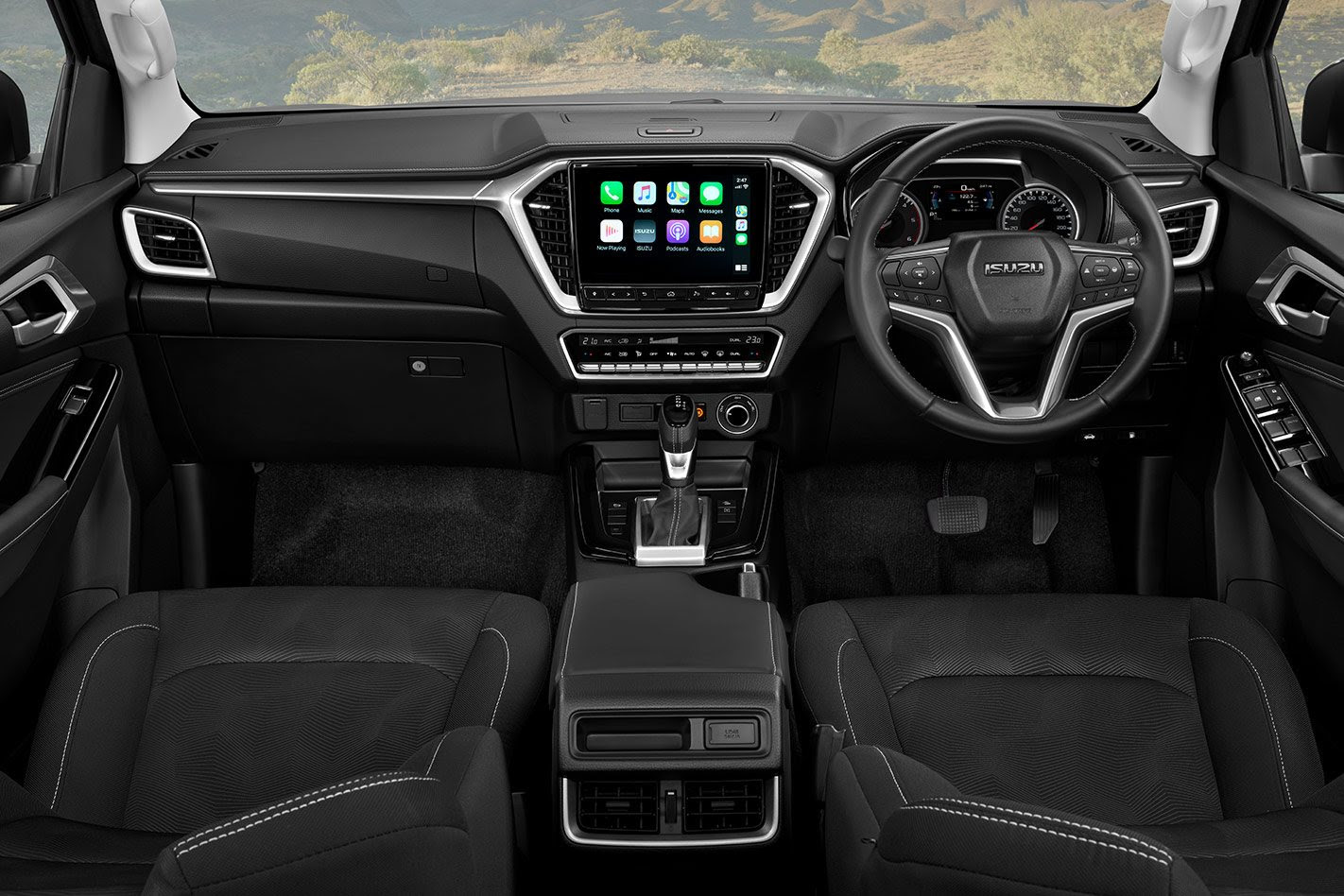 Prices have increased by between $2000 and $4000 across the four spec grades, but expect drive-away offers on some variants. Overall, Isuzu has made the shrewd move in a segment where dynamic mediocrity is no impediment to profitability. D-Max makes its biggest leap with safety and assistance, and does just enough elsewhere to not lag behind. Top 10 sellers’ list? Here it comes…

Plus: Advances the class for safety, assistance and connectivity; still tough as old boots underneath
Minus: Doesn’t advance the class for NVH or ride comfort; rear drum brakes; prices up