Is this much power in a very large SUV over the top?

You can now add the Mercedes-AMG GLS 63 to that list, for this new mega SUV is absurd. It also provides Australia’s first exposure to AMG’s new mild-hybrid V8. 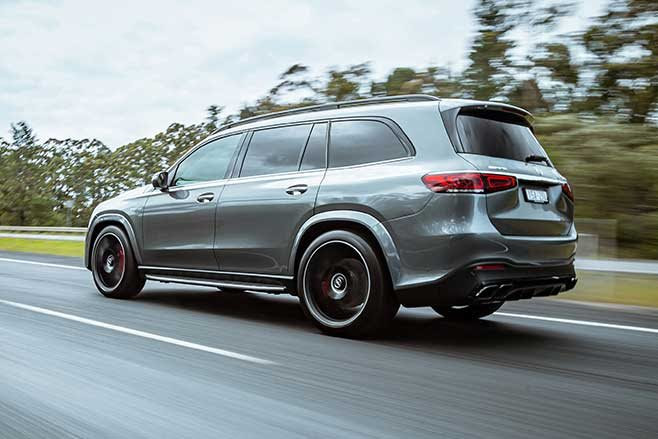 It uses the now-familiar 4.0-litre twin-turbo unit that does service in everything from the C63 to the S63 but adds Mercedes’s EQ Boost, a 48-volt electrical system that can provide up to 16kW/250Nm in short bursts, while also helping with energy recuperation and restarting the engine in stop/start driving.

Like the similarly-equipped 3.0-litre inline-six in AMG’s 53-designated models, this electrical assistance smooths out the power delivery and provides astonishing response.

The GLS 63 weighs 2555kg, but this seven-seat leviathan can accelerate from 0-100km/h in a claimed 4.2 seconds and onto an electronically limited top speed of 280km/h.

As I said, absurd. 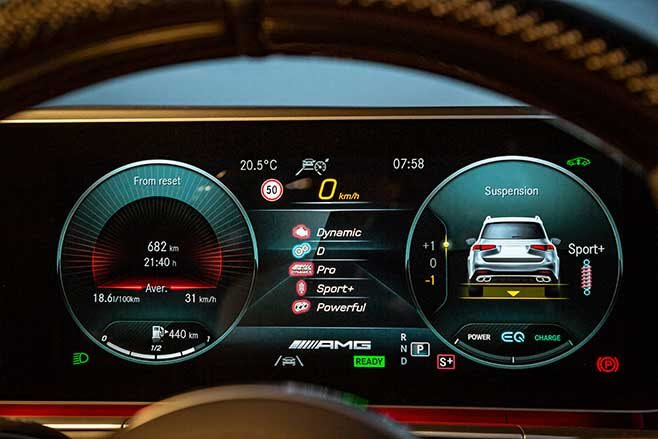 AMG’s M177 V8 has never lacked mid-range wallop but has struggled to maintain that ferocity at the top end.

While peak power is still developed at 5750rpm in this application, there’s a greater enthusiasm to rev, the grunt only starting to disappear beyond 6500rpm.

No one will ever step out of a GLS63 and think “not bad, but it could use a bit more shove”.

It sounds suitably potent, too, though with a smoother note than some of its lower, sportier siblings, which feels appropriate for a $255,700 family car.

Making the most of the grunt is the close-ratio, nine-speed wet-clutch automatic, which is swift in its shifts at speed.

Our test route, however, didn’t allow for any examination of its stop-start behaviour.

Fuel consumption, in case you are curious, is claimed to be 11.9L/100km – but you’re unlikely to ever approach that unless you’re on a highway cruise, with the Other Half in the jump seat glaring at you. 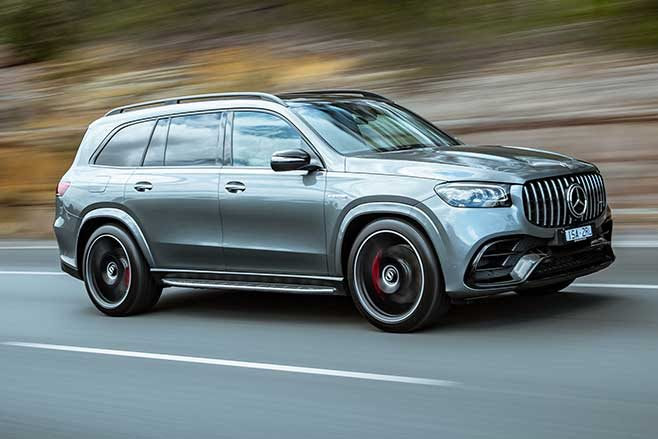 Every number associated with the GLS 63 is improbably large. Our test car sat on 23-inch rims wearing tyres measuring 285/40 at the front and 325/35 at the rear.

This thing is b-i-g.

Clever technology like adaptive air suspension with pneumatic self-levelling, fully variable all-wheel drive with an electronically controlled rear limited-slip diff and active anti-roll bars – controlled electro-mechanically via the 48-volt system rather than hydraulically  – do their best to keep the vast body under control and do so admirably, but the resulting driving experience is rather artificial. 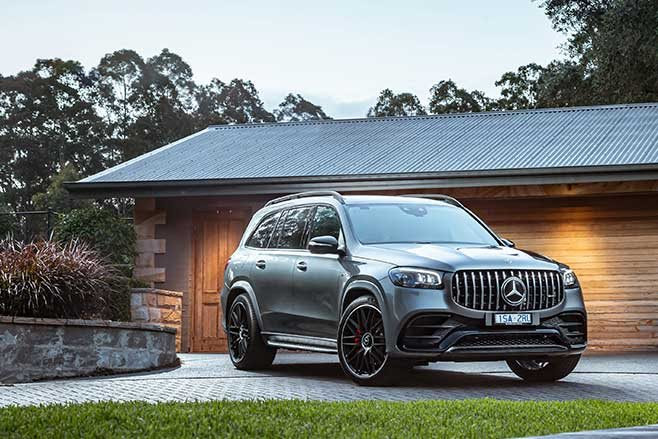 Make no mistake, the GLS 63 can be hustled harder and faster than you would ever believe (or any owner will probably ever attempt) but while the driver is responsible for guiding this monster you’re not particularly involved in the process.

Nor would you expect to be, I suppose, and the latest active roll systems do feel slightly more natural than earlier attempts.

The upside of the mega Merc’s substantial acreage is the ability to carry six adults in comfort ( there are seven seats, but the centre occupant of the middle row lucks out somewhat).

Even the rear-most row has cup holders, leather armrests and four USB charge points and the experience becomes progressively more luxurious as you work your way forward. 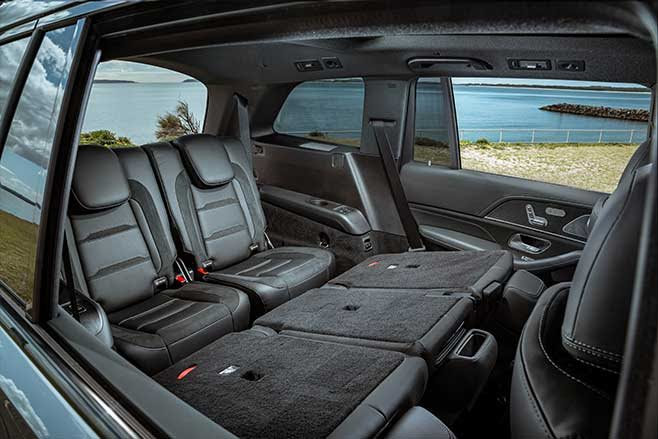 The middle row has heated outer seats and armrests, its own climate controls (thanks to the five-zone climate control), and a pair of USB charge points.

And if you tick a couple of options boxes, a pair of 11.6-inch screens with a TV receiver, two wireless headsets, a separate MBUX control tablet, wireless mobile charging and a temperature-controlled cup holder are yours, as well.

Drop the rear pair of rows and you end up with a truly cavernous 2400 litres of luggage space, which will be handy if you want to buy an entire Bunnings store at once. Like, actually take the store itself home. 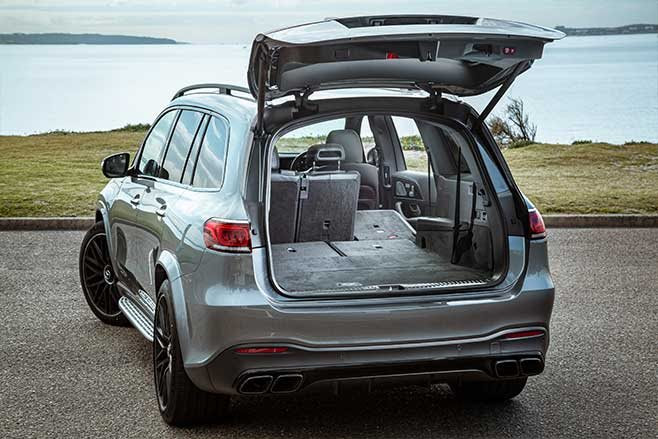 Up front there is simply too much to mention but here’s a taste: heated and cooled massage seats, heated arm rests, centre console and door panels, a pair of 12.3-inch displays for the infotainment and instruments, the latest MBUX connectivity with voice control, 13-speaker Burmester surround sound audio system, augmented reality navigation, every possible active safety system and a head-up display that’s bigger than the television in my lounge room.

It’s a cross between a rolling palace and a spaceship. Even the windscreen washers are heated. 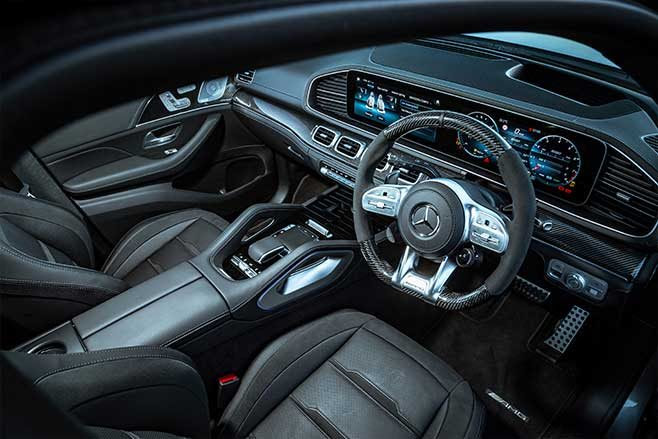 Nevertheless, the GLS 63 is an enigma. What it can do when driven enthusiastically is remarkable, but in engineering it to do so AMG has had to sacrifice the one quality you’d really want from a car like this – a super absorbent, magic carpet ride.

It’s very good, but not amazing.

It won’t matter, though, as the 63 provides the image that buyers will want, but personally I’d choose one of the lesser-engined variants – either the 270kW/500Nm GLS 450 3.0-litre petrol or 243kW/700Nm GLS 400d 2.9-litre diesel – and spend the $100,000+ saved (yes, really) on every luxurious option I could tick, happily trading alarmingly fast for beatifically calm. 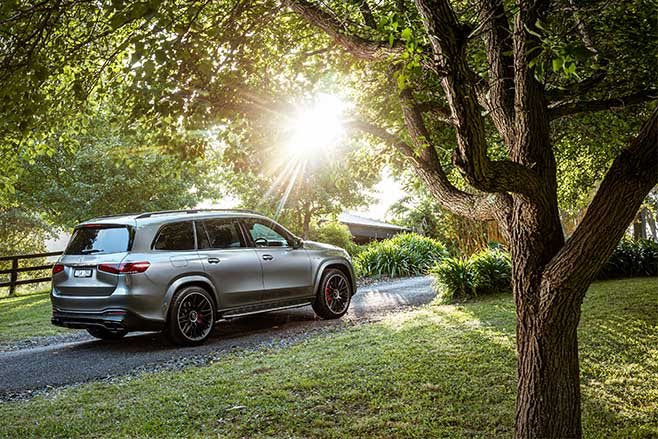