We’ve driven the new Land Rover Defender a few times – a full test review from Fraser Stronach in December 2020, and our initial pre-vehicle launch drive from Africa back in March 2020 – but we wanted to see how the latest Land Rover fares on your typical long weekend away in the bush with some mates.

That opportunity presented itself when our booking of a P400 Defender was perfectly timed with the easing of travel restrictions in Victoria and we were able to venture to the High Country. 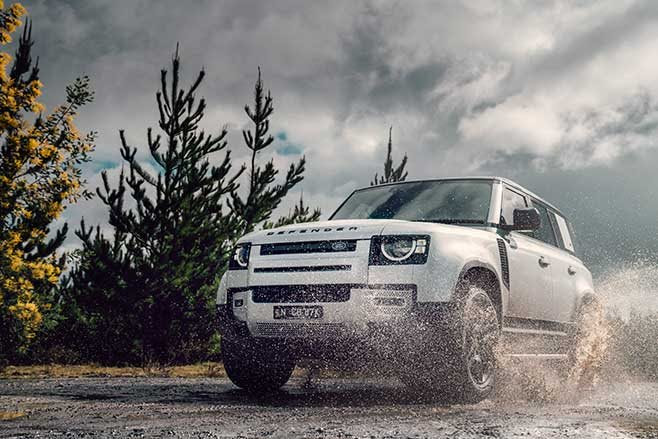 The New LR Defender P400 was the only Land Rover Defender available at the end of 2020, as the first batch of four-cylinder diesel models sold out instantly and the new six-cylinder diesel won’t be arriving until February or March 2021. Travelling in the alps in a petrol-fuelled four-wheel drive with only a 90-litre fuel tank can pose a problem, but we felt we should be okay for a casual three-day trip.

The back of the Land Rover Defender 110 wagon becomes massive once you fold the rear seats flat. They fold completely flat, giving a long load area with a couple of tie-down points at the sides of the rearmost section. There’s also a 12-volt point there, so our ARB fridge was strapped in and powered up; and swags, stretchers, chairs and other kit were easily accommodated with a strap to hold them in place. I even slept in there on a wet and stormy night. 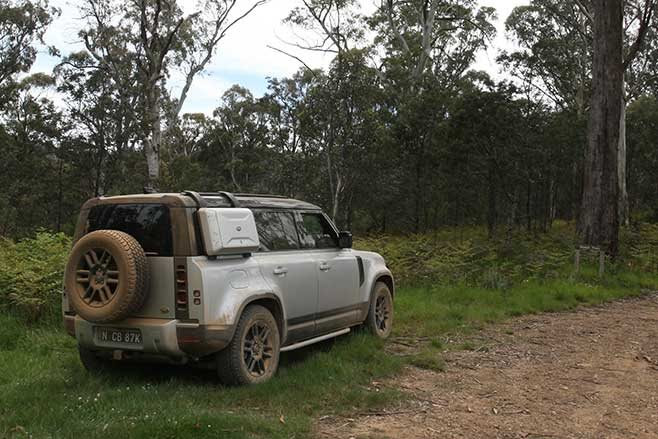 This vehicle was fitted with the optional 20-inch alloy wheels (19s are standard) with standard all-terrain tyres. The 255/60R20 tyres actually offer a half-decent amount of sidewall on them to cushion the ride and provide a bit of expansion with the pressure dropped, and we dropped them to 25psi for this sort of touring. They are a road-biased tyre so we knew we’d have to be wary of punctures on the often rocky tracks.

While the new Land Rover Defender is a tour de force of off-road technologies that can boggle the mind and confuse the operator, it surprised at how simple it was to get the right setting for mountainous terrain. Land Rover has moved away from a simple easy-to-use dial for the Terrain Response (TR) settings and instead placed them in the main screen accessed via a few menu prompts. Thankfully, this latest version of TR has an auto mode, so we chose to forget about it and get back to the basics. 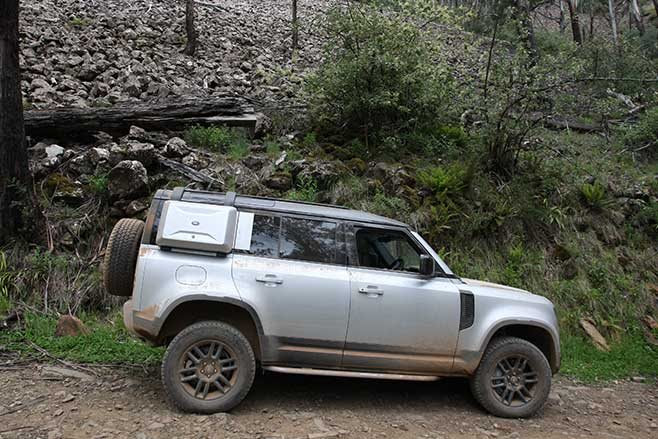 Select low range – turn the Hill Descent Control off – and jack the air suspension up to its off-road setting. That’s all it takes to set the Defender up for all but the most technical off-road driving, where you may need to select a specific mode in TR for quicker action of the locking diffs or sand driving.

The suspension now stays up at its off-road height at speeds up to 80km/h, so we didn’t need to touch it over three days of driving. And, unlike older systems like in the Land Rover Discovery and Range Rover models, the Defender has more suspension travel which gives a better ride over harsh bush tracks, even with it at its highest. Set and forget – enjoy the drive! High Country tracks aren’t the most challenging around, but the travel offered by the Defender’s suspension kept the wheels on the ground and gripping out of ruts and holes.

Driving the Land Rover Defender is every bit as easy. The driver’s seat has plenty of adjustment to get it right and the steering column adjusts for both reach and height. The large glasshouse that is a feature of Land Rover off-roaders is still there, making the Defender easy to place on the track, over rocks and between the trees. I played with the off-road cameras on a few river crossings that had boulders in their path and, while they do give an excellent view of each front tyre and the rocks directly in around them, it does require you to stop and look down at the screen to make the most of the cameras. It’s easier to look ahead, plan your direction and take your time.

The P400’s 550Nm 3.0-litre supercharged and turbocharged engine delivers ample grunt for climbing the steepest tracks while holding first gear in the eight-speed auto, and in low range producing more than enough engine braking on the steepest descents. This isn’t always the case with petrol engines and auto transmissions; but on most hills it was too low and brought the Defender to a stop, so a bit of throttle or 2nd/low was better suited. Three days of steep low-range tracks and the Defender didn’t put a tyre wrong. It went everywhere our travel companions went in there fully equipped outback touring 4x4s and impressed the drivers by how easily it did it.

Going off on-board computer readings, the Defender used less petrol than expected, recording an indicated 16.4L/100km of fuel. Still, at the end of three days we would have been looking for fuel going into day four, so a bigger tank would be handy.

What we really came away with from this outing was how easy and capable the Land Rover Defender P400 is on such a weekend 4×4 trip. Now let’s see if the aftermarket is going to come out with products to make it even better.