After a little bit of teasing and a Nurburgring lap record claim, the new 2021 Porsche Panamera has finally been revealed in all its limousine glory.

With a broad launch model range, the new Panamera builds upon the previous model with extensive updates, upgrades, and facelifts.

Porsche has no less than 12 variants of the new Panamera from launch, accounting for different drivetrains and body styles, from the base ‘Panamera’ model though to the Turbo S and 4S E-Hybrid variants.

Australia will receive eight variants of the Panamera, starting with the base model, moving up to the AWD Panamera 4 and its Executive and Sport Turismo (wagon) variants, then to the electrified 4S E-Hybrid, the more sporting-focussed GTS and GTS Sport Turismo, and finally the big daddy Turbo S, which takes over from ‘Turbo’ as the Panamera flagship. 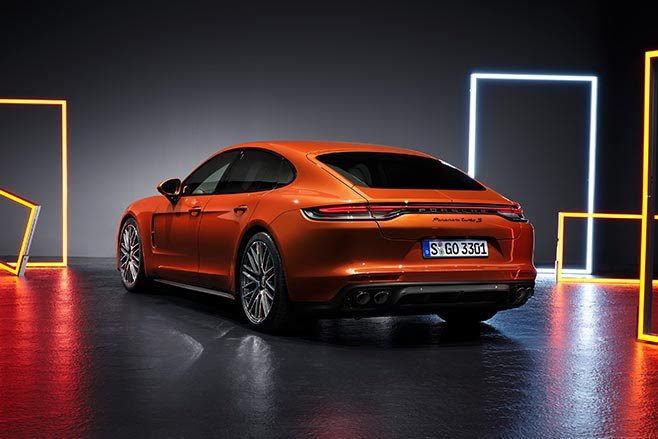 Though details of the mechanical changes that have created the new Panamera range are relatively vague, we know plenty of attention has been paid to the suspension and chassis of the model, creating a more capable drivers car as proven by its Nürburgring lap time and comments from Porsche test driver Lars Kern, who said the previous model wouldn’t physically have been able to achieve what the new one does.

Porsche Australia says the new Panamera is available to order now, though deliveries will begin to take place from December 2020.

So, without further ado, we’ll start from the top of the range with the details. 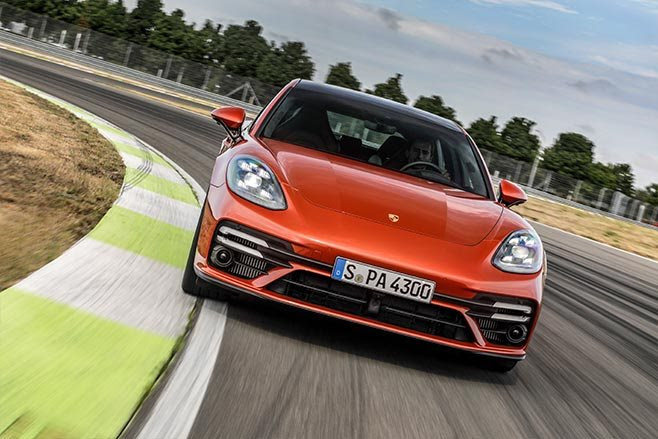 Porsche Australia has confirmed the Turbo S will start at $409,500.

With a 4.0-litre twin-turbo V8 under the bonnet putting 463kW and 820 Nm to all four wheels, the Turbo S is claimed to hit 100km/h in an astonishing 3.1 seconds. Astonishing especially as it weighs 2080kg. It’s able to carry on to top out at 315km/h. Porsche’s Sport Chrono Pack is standard on Turbo S, as with GTS and E-Hybrid.

By comparison, the previous Panamera Turbo was down 59kW and 50Nm on the new Turbo S.

All variants of the Panamera use Porsche’s 8-speed PDK, with tuning dependent on drivetrain. 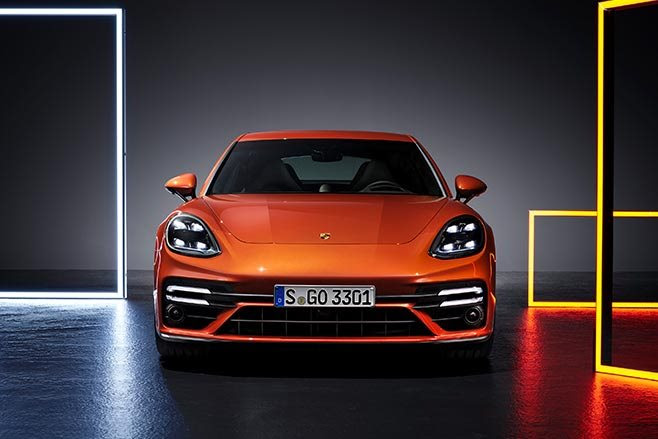 The Turbo S is the only variant to receive Dynamic Chassis Control Sport and Torque Vectoring Plus as standard, as well as ceramic brake discs (420mm front; 410mm rear) with yellow 10-pot aluminium monobloc fronts with 4-pot rears. These brakes sit behind 21-inch 911 Turbo Design wheels, wrapped in 9.5-inch rubber at the front, but 11.5-inches at the rear.

Rear-axle steering is standard on the Turbo S, but a $3750 option on the rest of the range. 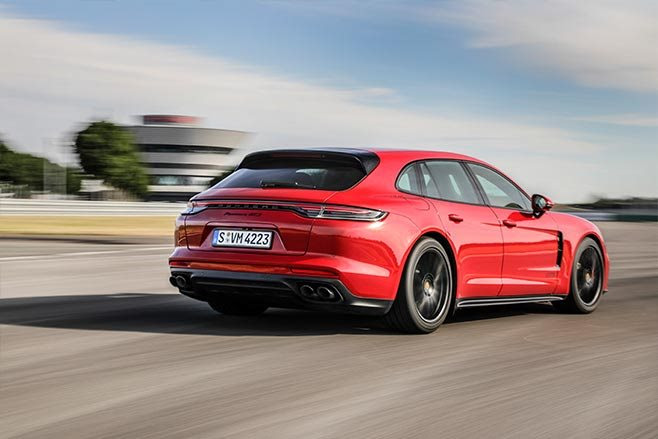 Stepping down, but not necessarily getting less focused than the Turbo S, is the Panamera GTS. Porsche Australia will hand you the keys if you’ve got $309,500 in your wallet, or $316,800 for the Sport Turismo wagon.

Though it’s not as powerful, a few details of the GTS make it the ‘driver’s choice’ of the range, including its air suspension (with PASM, Porsche Active Suspension Management) being tuned for spirited driving and therefore also 10mm lower than the rest of the Panamera range. 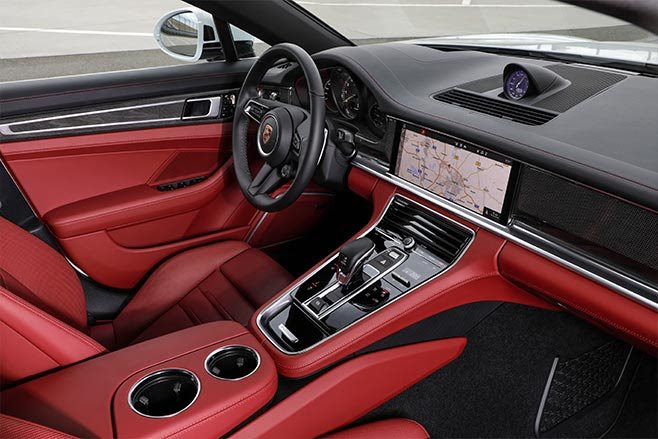 A sports exhaust with black tailpipes is standard on the GTS, though it’s $7100 if you want it for another Panamera model.

As you’d expect, the chassis and suspension have had a proper revamp, with Porsche focusing on making the PASM system more conducive to hard driving without sacrificing comfort.

The steering and Dynamic Chassis Control Sport systems have also been overhauled.

Tyre widths are the same on the GTS as the Turbo S (9.5-inch at the front, 11.5 at the rear), but on 20-inch wheels. Brake callipers for the GTS are the same as the rest of the range below it, 6-pot fronts and 4-pot rears, though disc sizes vary. GTS scores 390mm fronts and 365 rears. 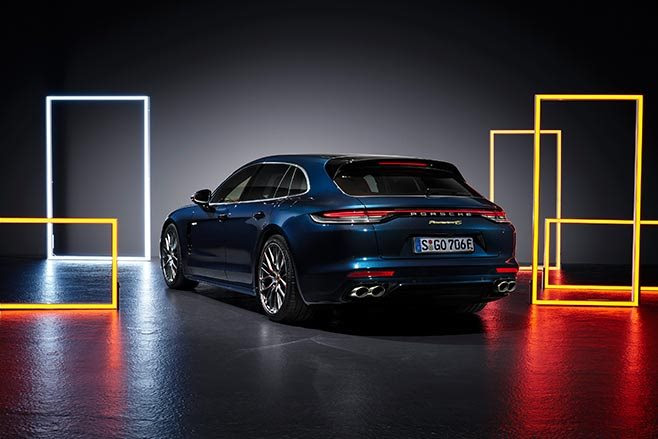 If you’ve got a green thumb, and $292,300, you can grab Porsche’s Panamera 4S E-Hybrid, available only in ‘sedan’ form here for now. Pictured above is a Sport Turismo.

Its 412kW and 750Nm are drawn from a 2.9-litre V6 twin-turbo engine, helped by an electric motor integrated into the eight-speed dual-clutch which contributes 100kW to the total. It’s a plug-in hybrid, which means the 17.9 kWh battery (up from 14.1kWh in the previous version) can be juiced from your wall at home.

The E-Hybrid is able to hit 100km/h in 2.7 seconds, hit a top speed of 298km/h, though it’s the heftiest of the range at 2225kg thanks to electrification and the associated batteries.

Brake discs on the E-Hybrid are 410mm at the front to accommodate its bulk, with 365mm at the rears.

2021 Porsche Panamera 4 and base model 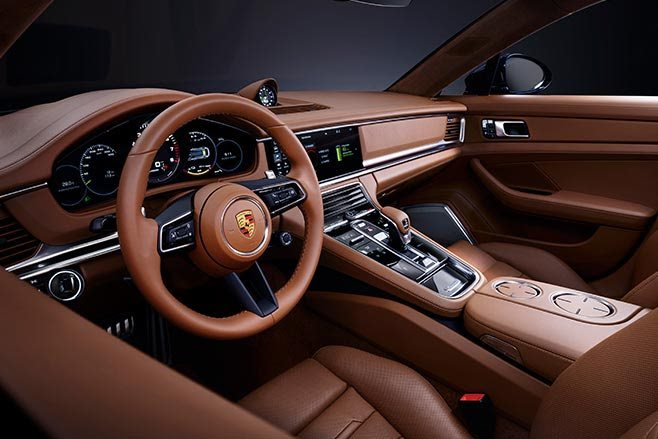 Times for 0-100km/h are claimed at 5.3sec for the 4 and its Sport Turismo bro, a slightly slower 5.4 for the 4 Executive, and 5.6sec for the rear-drive base model, though the Sport Chrono pack knocks two tenths off each of these times if optioned.

The primary difference for the 4 is the options and features on the Executive, which includes a host of comfort options such as individually adjustable seats with heating all round and ventilation at the front, plenty of gloss silver and brushed aluminium trim.

Brakes for all variants here are 350mm discs at the front and 330 rears, except the 4 Sport Turismo which cops 390mm and 365mm discs from the GTS.